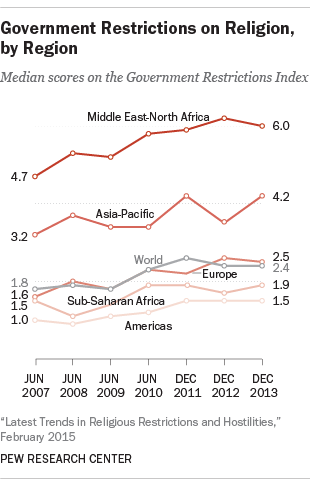 The median level of government restrictions on religion increased in two of the five regions (Asia-Pacific and sub-Saharan Africa) and decreased in two regions (Middle East-North Africa and Europe). It stayed the same in the Americas.

In the latest year studied, the Middle East and North Africa continued to have the highest median level of government restrictions. The median score on the Government Restrictions Index for the 20 countries in the region decreased slightly, from 6.2 in 2012 to 6.0 in 2013, but it remained much higher than the global median (2.4). Many government restrictions present in the region in past years continued to occur in 2013. For example, government limits on public preaching were reported in 17 of the 20 countries, the same as in 2012. Similarly, government interference with worship occurred in 19 of the 20 – unchanged since 2012.

In the Asia-Pacific region, the median score on the GRI increased from 3.5 in 2012 to 4.2 in 2013. Government violence toward minority or unapproved religious groups was reported in 22 of the 50 countries in the region in 2013, up from 18 in 2012. In China, for instance, police in eastern Tibet reportedly beat a former Buddhist monk to death in April 2013 after he was found to have recordings of speeches by the Dalai Lama.26 And in Pakistan, the government continued to enforce laws designed to marginalize the minority Ahmadiyya community, including laws that make it difficult for members of the community to vote or obtain passports and other legal documents if they do not renounce their faith.27

In Europe, the median score on the GRI went from 2.6 in 2012 to 2.5 in 2013, remaining slightly above the global median. Decreases in government restrictions within the region included fewer limits on foreign missionaries and fewer reports of government harassment or intimidation of religious groups.

The Americas’ median score on the GRI stayed the same in 2012 (at 1.5), considerably below the global median. 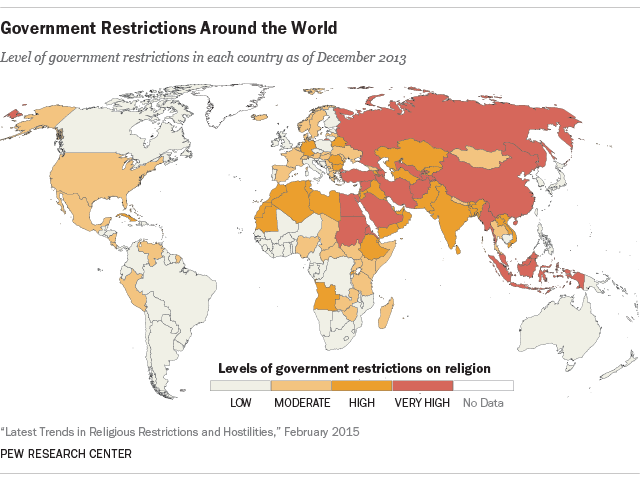 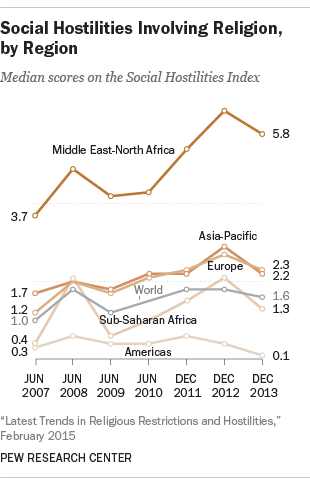 The median level of social hostilities involving religion decreased in all five regions in 2013. As in the previous years of the study, social hostilities involving religion were highest across the Middle East and North Africa. Although the region’s median score on the Social Hostilities Index decreased, from 6.4 in 2012 to 5.8 in 2013, it remained well above the global median (1.6). Religious hostilities decreased in 17 of the 20 countries in the region and increased in only two – Libya and Qatar. (One territory, Western Sahara, had no change.)

Only one country in the Middle East-North Africa region had a score that increased by one point or more on the SHI: Libya, which rose from 5.4 in 2012 to 6.9 in 2013. Salafist groups in Libya destroyed several Sufi religious sites, including the 500-year-old Al-Andalusi mausoleum in Tripoli. Egyptian Coptic Christians living in Libya also were targeted. In March 2013, for example, arsonists set fire to the main Coptic church in Benghazi. According to the U.S. State Department, the arson attack “followed escalating anti-Coptic abuse,” including an assault on a Coptic priest and the reported seizure of dozens of Egyptian Coptic Christians by militia groups in Benghazi.28

Sub-Saharan Africa’s median score on the SHI fell from 2.1 in 2012 to 1.3 in 2013, slightly below the global median (1.6). Sectarian violence and attempts to enforce religious norms were reported in fewer countries in the region in 2013 than in 2012, with one notable exception. In the Central African Republic, conflict between predominantly Muslim rebels and Christian vigilante groups led to multiple types of religious hostilities into the country, including: sectarian violence; attempts by organized groups to dominate public life with their perspective on religion; religious groups attempting to prevent other groups from operating; hostilities over conversions; and mass civilian displacement.29 Collectively, these hostilities contributed to a significant increase in the level of social hostilities in the Central African Republic, whose score on the SHI rose from 4.5 in 2012 to 7.6 in 2013.

In the Asia-Pacific region, the median score on the SHI decreased from 2.9 in 2012 to 2.2 in 2013, but it remained above the global median. Factors contributing to the decrease included a decline in hostilities related to proselytizing, which was reported in 13 of the 50 countries in the region in 2013, down from 18 countries in 2012. There also was a decrease in the number of countries in the region where religious groups attempted to prevent other groups from operating. 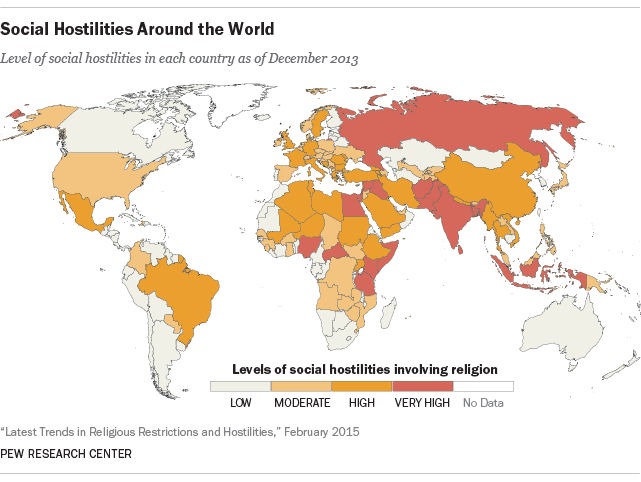