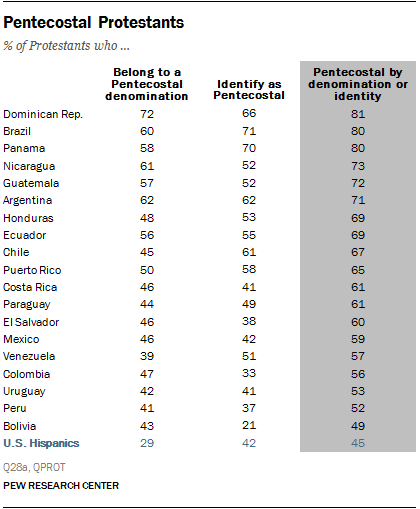 Many Christians in Latin America identify with Pentecostalism and related movements. Pentecostals take their name from the biblical feast of Pentecost (originally the Jewish festival of Shavuot, which took place 50 days after Passover), when the apostles and other early followers of Jesus were filled with the Holy Spirit and suddenly “began to speak in other tongues,” according to Acts of the Apostles in the New Testament. Today, Pentecostal worship services frequently include experiences that believers consider to be gifts of the Holy Spirit, such as speaking in tongues, divine healing, exorcisms, receiving direct revelations from God and giving or interpreting prophecy. Catholics who engage in similar practices often call themselves charismatics, from the Greek word for gift or favor.8

The Pew Research Center survey finds that in every country across Latin America, roughly half or more of Protestants either say they belong to a church that is part of a Pentecostal denomination or personally identify as a Pentecostal Christian, regardless of their denominational affiliation. In addition, in nearly every country surveyed, at least one-in-five Catholics describe themselves as charismatics.

Pentecostalism in Latin America, as elsewhere around the world, can refer both to a particular set of Protestant denominations (such as the Assemblies of God) and to a broader revival movement that dates back to the early 20th century in the United States. This broader movement now includes thousands of largely independent, indigenous churches in Asia, Africa and Latin America.

The survey finds that in three Latin American countries – the Dominican Republic, Brazil and Panama – about eight-in-ten Protestants either belong to a church that is part of a Pentecostal denomination or personally identify as Pentecostal Christians, regardless of denomination. And in Puerto Rico, Nicaragua, Guatemala, Argentina, Honduras, Ecuador and Chile, roughly two-thirds or more of Protestants are Pentecostal by denomination, personal identification or both. In the United States, by comparison, 18% of all Protestants, including 45% of Hispanic Protestants, are Pentecostal by one definition or another. 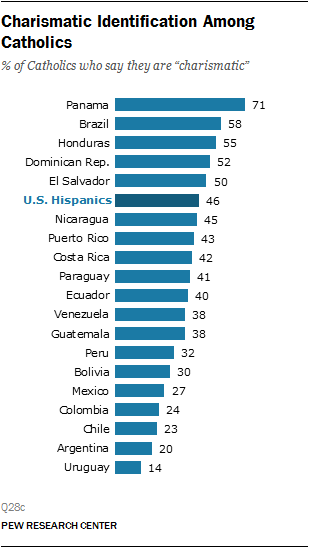 Over time, some Catholics have incorporated elements associated with Pentecostalism into their worship, leading to the rise of charismatic movements within Catholicism. In virtually all of the places surveyed, self-identified charismatics make up a substantial portion of the Catholic population. And in a handful of Latin American countries – Panama, Brazil, Honduras, the Dominican Republic and El Salvador – at least half of Catholics say they are charismatic. Similarly, nearly half (46%) of Hispanic Catholics in the United States identify as charismatic.

Experiences With the Holy Spirit 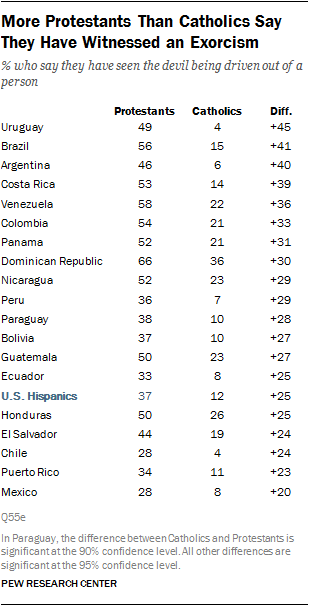 The survey asked all respondents whether they personally have experienced or witnessed each of five practices that often are associated with Pentecostal or charismatic worship: divine healing, receiving a revelation, seeing the devil being driven out of a person, giving or interpreting prophecy and speaking in tongues. Overall, the survey finds that the most prevalent of these experiences in Latin America is divine healing. In a majority of the places surveyed, at least half of Protestants say they have seen or experienced the divine healing of an illness or injury. (See table in Overview.)

In addition, at least a third of Protestants in most countries report that they have seen the devil being driven out of a person. Although the Roman Catholic Church is associated with exorcisms in popular culture – and it continues to have a formal rite for priests who are authorized by their bishops to perform the procedure – Latin American Catholics are much less likely than Protestants to say they have witnessed or experienced an exorcism.

Combining all five gifts of the Holy Spirit mentioned in the survey into a scale provides a sense of how common these experiences are in each country. Protestants most frequently report high levels of exposure to Pentecostal practices in Brazil, the Dominican Republic, Panama and Colombia, with roughly half in each country saying they have witnessed or experienced at least three of the five gifts.

While Catholics report considerably less exposure to the gifts of the Holy Spirit than do Protestants, in some Central American countries, including El Salvador, Guatemala, Honduras, Nicaragua and Panama, at least 15% say that they have had at least three of the five experiences mentioned in the survey. Experiences with the gifts of the Holy Spirit also are relatively common among Catholics in the Dominican Republic, with more than a quarter (28%) reporting that they have witnessed or experienced at least three of the five practices. 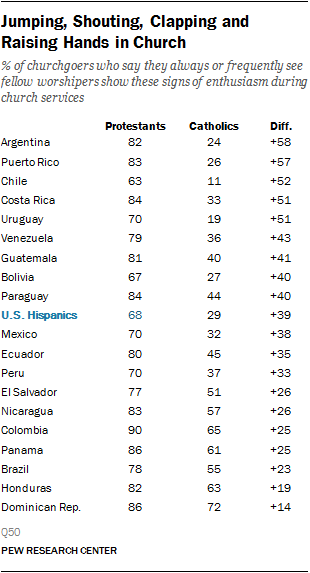 Another characteristic of Pentecostalism is its enthusiastic style of worship – including jumping, clapping, shouting and raising hands in church. This type of worship experience appears to be widespread across Latin America. The vast majority of Protestants who attend worship services report that they always or frequently experience these practices. Across the region, fewer Catholics report experiencing them. But in a handful of countries – including Colombia, the Dominican Republic, Honduras, Nicaragua and Panama – a majority of Catholics who attend church at least occasionally say they always or frequently see fellow worshipers jumping, shouting, clapping and raising their hands during Mass.

The survey asked about the belief – often associated with Pentecostalism – that God grants material wealth and good health to Christians who have enough faith. Known as the “prosperity gospel,” this idea is widespread among Protestants in Latin America. Majorities of Protestants in every country surveyed, ranging from 56% in Brazil to 91% in Venezuela, express the belief that God provides material prosperity to the faithful.

While belief in the prosperity gospel is closely associated with Pentecostalism, the survey finds that in most Latin American countries, majorities of Catholics also say that God will grant wealth and good health to believers who have enough faith. Belief in the prosperity gospel is particularly high among Catholics in five Central American countries – Guatemala (89%), Panama (86%), El Salvador (84%), Honduras (84%) and Nicaragua (78%) – as well as in Venezuela (87%), Colombia (80%), the Dominican Republic (79%) and Ecuador (77%).