The Pew Research survey finds that nearly all Catholics and Protestants in most Latin American countries believe in God. In a number of countries, most of those who are unaffiliated with any religion also say they believe in God.

However, the survey finds significant differences between Catholics, Protestants and the unaffiliated when it comes to some religious beliefs. For instance, Protestants tend to be more likely than Catholics to take a literal view of the Bible and to believe in hell.

The survey asked respondents whether they subscribe to a variety of beliefs and practices often associated with Afro-Caribbean, Afro-Brazilian or indigenous religions. While substantial proportions of both Catholics and Protestants say they hold at least some of these beliefs, Catholics generally are more likely than Protestants to subscribe to three or more of the eight Afro-Caribbean, Afro-Brazilian or indigenous beliefs and practices mentioned in the survey.

Belief in God, Angels and Miracles 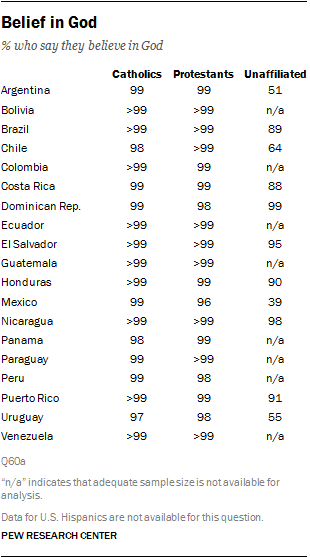 Nearly all Latin American Christians –whether they are Catholic or Protestant – say they believe in God. Uruguay is the only country surveyed where fewer than nine-in-ten people (81%) profess such a belief.

The vast majority of Catholics in Latin America say that they believe in transubstantiation – that the bread and wine used during Holy Communion become the actual body and blood of Christ.

In nearly every country surveyed, plus Puerto Rico, more than three-quarters of Catholics say they believe in transubstantiation. Uruguay is the one country where a smaller majority of Catholics (57%) say that during Communion, the bread and wine are transformed into the body and blood of Christ. 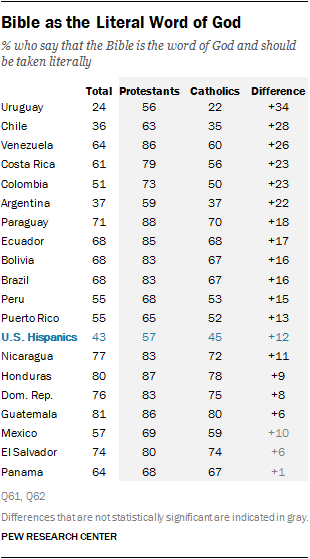 In a majority of countries surveyed, half or more respondents say the Bible is the word of God and should be taken literally, word for word. This view is particularly widespread in the Central American countries of Guatemala (81%), Honduras (80%) and Nicaragua (77%). Only in the “Southern Cone” countries of Argentina (37%), Chile (36%) and Uruguay (24%) do fewer than half of adults subscribe to a literal reading of the Bible.

In the United States, 73% of Hispanics say the Bible is the word of God, but just 43% believe it should be taken literally, word for word.

Overall, Protestants in Latin America are more likely than Catholics to view the Bible as the literal word of God. This disparity is especially evident in Uruguay, where 56% of Protestants and 22% of Catholics say the Bible should be taken literally. There also are large gaps between Protestants and Catholics on this question in Chile (63% vs. 35%) and Venezuela (86% vs. 60%).

Attitudes toward the Bible vary among the religiously unaffiliated. In some countries, majorities of unaffiliated adults subscribe to biblical literalism, including six-in-ten or more in the Dominican Republic (73%), Nicaragua (70%), Honduras (66%) and El Salvador (61%). By contrast, relatively few among the unaffiliated take a literal view of the Bible in Mexico (12%), Chile (12%), Uruguay (11%) and Argentina (3%).

Views on Jesus’ Return to Earth 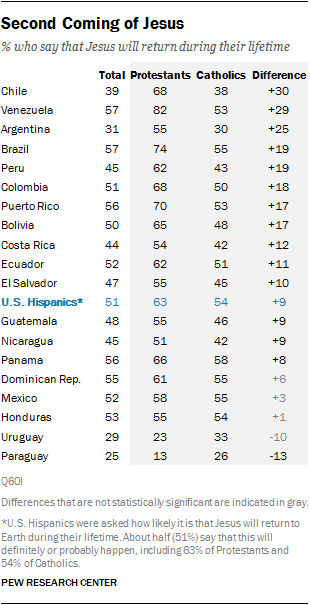 In many countries polled, roughly half or more of respondents believe Jesus will return to Earth during their lifetime, including majorities in Brazil (57%), Venezuela (57%), Panama (56%) and Puerto Rico (56%). Among U.S. Hispanics, 51% share this view.

In general, Protestants in Latin America are more likely than Catholics to say that Jesus’ second coming is imminent. In Chile, for example, roughly two-thirds of Protestants (68%) say that Jesus will return to Earth during their lifetime, compared with 38% of Catholics. Paraguay is an exception to this pattern; Catholics are more likely than Protestants in Paraguay to express the belief that Jesus will return during their lifetime, although less than a third of Paraguayans overall believe this.

Belief in Heaven and Hell 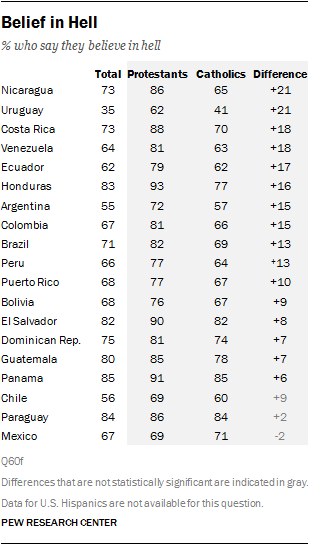 Catholics and Protestants differ little in terms of belief in heaven. Wider differences separate the two groups when it comes to belief in hell, with Protestants in most countries more likely than Catholics to believe in hell. 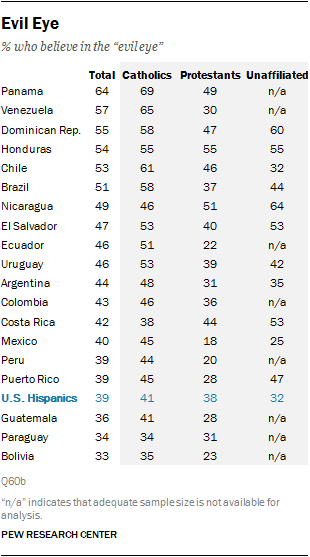 The survey asked respondents if they hold certain beliefs associated with Afro-Caribbean, Afro-Brazilian or indigenous religions. These include belief in the “evil eye,” reincarnation, communicating with spirits, and magic, sorcery or witchcraft. The survey also asked respondents if they engage in practices such as making offerings to spirits, spiritual healing or seeking the help of a traditional healer.

Belief in the “evil eye”– that certain people can cast curses and spells that cause harm – is fairly common in Latin America. At least a third of respondents in every country surveyed say they believe in the evil eye, including more than half in Panama (64%), Venezuela (57%), the Dominican Republic (55%), Honduras (54%), Chile (53%) and Brazil (51%). Among U.S. Hispanics, 39% share this belief.

Fewer Latin Americans say they believe in reincarnation, communicating with spirits, and magic, sorcery or witchcraft. Still, at least a third of people in nearly every country surveyed say that magic, witchcraft or sorcery can influence people’s lives. And in most countries, roughly a quarter or more say they believe in reincarnation, as well as the possibility of being able to communicate with spirits.

In nearly every country surveyed, at least three-in-ten respondents say they have engaged in at least three of the eight indigenous beliefs and practices mentioned – belief in the evil eye, reincarnation, witchcraft or sorcery, communicating with spirits, offering food, drinks or flowers to spirits, participating in spiritual cleansing ceremonies, consulting traditional healers and experiencing black magic. (For full question wording, see the topline).

On balance, larger shares of Catholics than Protestants report medium to high levels of engagement with indigenous beliefs and practices. In Mexico, for example, 49% of Catholics say they engage in at least three of the eight items mentioned in the survey, compared with 23% of Protestants.

Engagement with Afro-Caribbean, Afro-Brazilian or indigenous religions varies widely among the religiously unaffiliated – ranging from 45% who report medium to high levels of engagement in Nicaragua to 22% in Argentina and Mexico.

Who Qualifies as Christian? 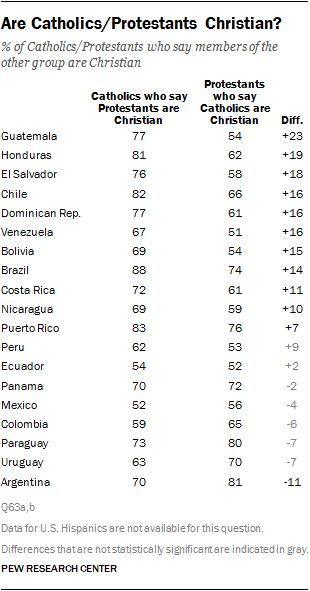 In most countries surveyed, majorities of both Catholics and Protestants recognize each other as belonging to the Christian faith. However, Catholics tend to be more accepting of Protestants as fellow Christians than vice versa.

Differing levels of acceptance are especially pronounced in Guatemala, where 77% of Catholics consider Protestants to be Christians, but only 54% of Protestants say the same about Catholics. Other countries where Catholics are considerably more accepting of Protestants as fellow Christians than the reverse include Honduras, El Salvador, Chile, the Dominican Republic and Venezuela. 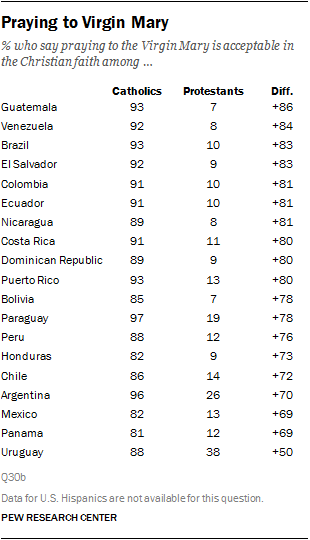 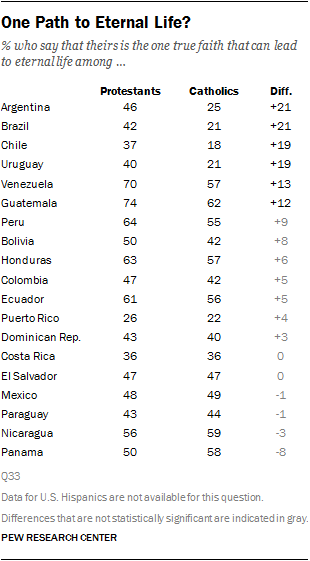