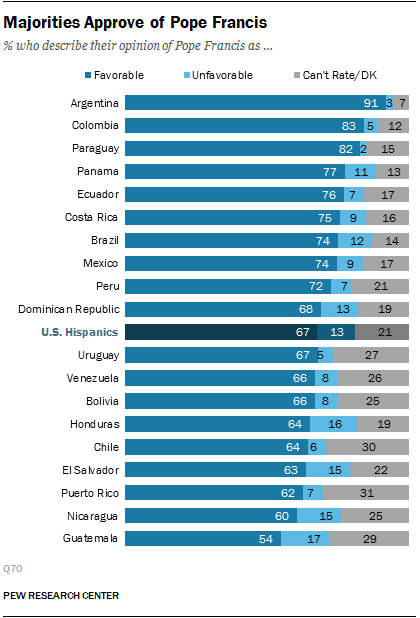 Latin Americans have widely embraced Pope Francis – the first head of the Catholic Church elected from the New World. More than half of respondents in each of the countries surveyed express a favorable opinion of the new pontiff, including nine-in-ten adults in his native Argentina; 67% of U.S. Hispanics also view Francis favorably.

Pope Francis has not impressed everyone in Latin America equally, however. Among former Catholics, relatively few give the pope a positive rating, with many saying it is too soon to rate him. Similarly, while majorities of Catholics in most countries describe the election of Francis as representing a major change for the Catholic Church, this view is held by much smaller shares of former Catholics.

Change is on the minds of many Latin American Catholics when it comes to certain church teachings. In a majority of the countries surveyed, at least half of Catholics think the church should alter its stances against divorce and the use of artificial means of birth control. Catholics’ views are more closely divided on whether the church should permit women to serve as priests or male clergy to get married. Overall, Catholics who are more religiously observant (that is, who attend Mass weekly) are less supportive of changes to the church’s teachings on these matters than are Catholics who attend Mass less often. 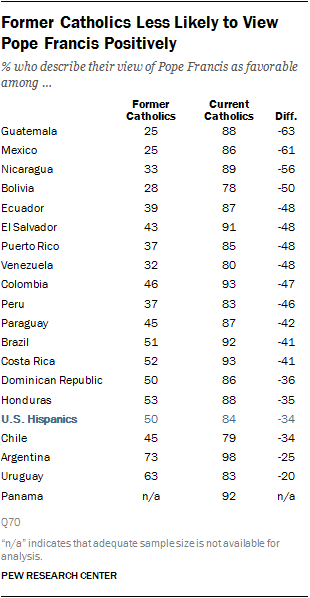 Pope Francis receives overwhelmingly positive ratings from Catholics in his home region. In every country polled, roughly eight-in-ten or more Catholics express favorable views of Francis, and he receives near-universal approval from Catholics in his native country – Argentina.
More religiously observant Catholics hold the pope in especially high regard. In most countries, Catholics who say they attend church at least once a week express stronger support for the pope than do Catholics who attend church less often.

In contrast with the warm regard for Pope Francis among current Catholics, former Catholics are cooler toward the new pontiff. Only in Argentina (73%) and Uruguay (63%) do clear majorities of former Catholics say that they have a favorable view of the pope. Elsewhere, no more than about half of former Catholics give the pope a positive rating, with favorable opinion especially limited among ex-Catholics in Mexico and Guatemala (25% each).

Those who do not rate Francis favorably do not necessarily have negative views of him. In most countries, substantial shares of former Catholics volunteer that it is too soon to judge the new pope, including roughly half in Bolivia (54%), Mexico (50%), Chile (49%), Puerto Rico (49%), Guatemala (48%), Panama (48%) and Venezuela (47%). The survey was conducted in late 2013 and early 2014, less than a year into Francis’ papacy.

Pope Francis and Change Within the Church 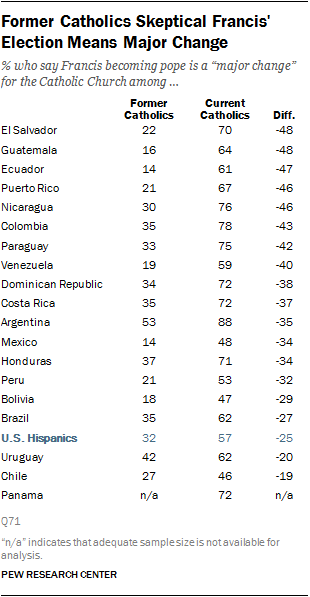 Many Catholics across Latin America see the ascendance of Pope Francis as a watershed moment for the Catholic Church. In most countries surveyed, at least half of Catholics say the pope’s election is a “major change” for the church. Three-quarters or more of Catholics share this view in Argentina (88%), Colombia (78%), Nicaragua (76%) and Paraguay (75%).

Catholics who have a positive view of Pope Francis, as well as Catholics who attend religious services at least once a week, are especially likely to describe Francis’ election as a major change. Catholics ages 35 and older also are more convinced than their younger counterparts that the new pontiff signifies a major change for the church.

Across most of the countries surveyed, at least a quarter of former Catholics do not offer a definite opinion about the impact of Pope Francis’ election.

Teachings on Birth Control and Divorce

Catholics across Latin America support changes to the Catholic Church’s teachings on contraceptive use and divorce.

Solid majorities of Catholics in most countries surveyed say the church should allow Catholics to use artificial means of birth control, including eight-in-ten or more in Chile (83%), Venezuela (83%), Argentina (83%) and Uruguay (80%).

Similarly, when asked if the Catholic Church should permit marriages to be dissolved by divorce, majorities of Catholics say yes in more than half of the countries polled.

Catholics who attend Mass at least once a week are less likely than those who attend less often to support changes to the church’s teachings on contraception and divorce. And in almost every country, Catholics with less than a secondary school education are significantly less supportive of the church changing these teachings than are Catholics with more formal education.

Policies Toward the Priesthood

Catholics are more divided when it comes to changes in the priesthood. In only five places surveyed – Uruguay (66%), Chile (65%), Puerto Rico (62%), Argentina (58%) and Brazil (56%) – do clear majorities think that the church should permit priests to get married.10 In many countries, most Catholics object to allowing priests to marry, including seven-in-ten or more in Guatemala (76%), Honduras (73%) and El Salvador (70%).

Similarly, in just a few Latin American countries do majorities of Catholics say the church should allow women to be ordained as priests. In roughly half the countries surveyed, majorities or pluralities favor maintaining an all-male priesthood.

Catholics who attend religious services weekly and those who have no more than a primary school education are particularly likely to support the church’s requirements that priests be male and unmarried. 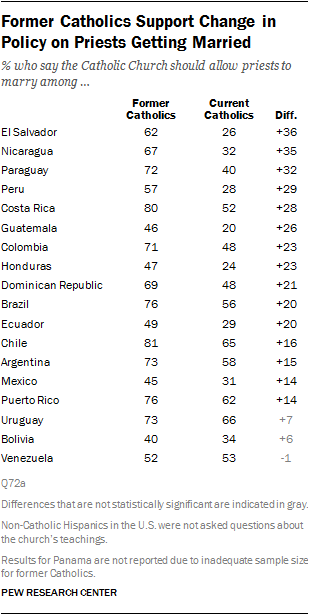 When it comes to views on contraceptive use, former Catholics are more in line with current Catholics. Both groups generally support a change in the Catholic Church’s teaching on the use of contraception. Both groups are divided on whether women should be able to serve as priests.

On the question of whether the Catholic Church should allow divorce, former Catholics in a handful of countries (Bolivia, Colombia, the Dominican Republic, Paraguay, Peru and Venezuela) are less likely than current Catholics to say that the church should change its teaching. But substantial proportions of former Catholics – including roughly 20% in Bolivia, Guatemala and Peru – also do not take a position on the issue either way.