The Pew Research survey of 18 Latin American countries and the U.S. territory of Puerto Rico finds relatively few statistically significant differences between Catholics and Protestants when it comes to demographic characteristics, such as age, gender and educational attainment. In a few countries, however, Protestants are less likely than Catholics to have at least a secondary school education and are more likely to have relocated from a different part of the country. These demographic differences mirror the ones discussed in Chapter 1, which compares Catholics with those who were raised Catholic but have since converted to the Protestant faith.

Two factors that consistently distinguish the religiously unaffiliated from Catholics and Protestants are that, on average, the unaffiliated are younger and more likely to be male. 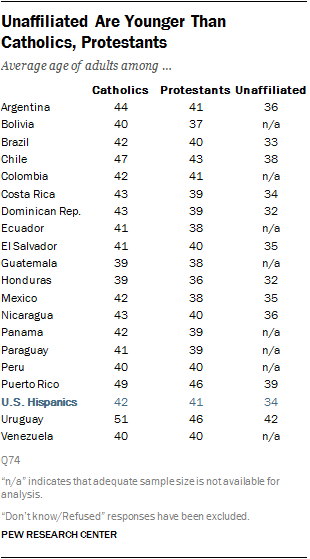 Among the three major religious groups analyzed in this survey – Catholics, Protestants and the religiously unaffiliated – the unaffiliated are the youngest in age. Catholics, on balance, are the oldest population.

Among Hispanics in the United States, Catholics and Protestants are similar in terms of age (averages of 42 and 41, respectively), while Hispanics who are religiously unaffiliated are significantly younger (average age of 34). 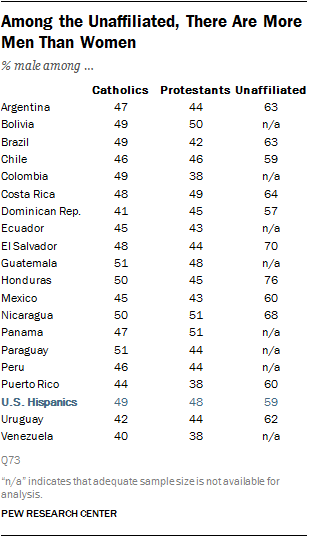 Across Latin America, the share of religiously unaffiliated people who are male is higher than the percentage of men among Catholics or Protestants. Catholics and Protestants are not significantly different from one another in terms of gender distribution.

In nearly every Latin American country, and among U.S. Hispanics, the gender breakdowns of Catholics and Protestants are roughly the same. The only exception is Colombia, where Protestants are significantly more female than are Catholics. 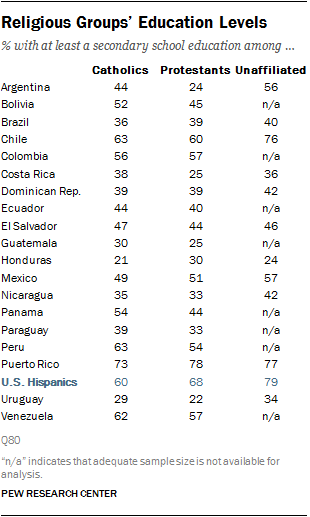 Overall, the three religious groups included in the survey do not vary dramatically with regard to educational attainment.

In three countries – Argentina, Costa Rica and Panama – Catholics report significantly higher levels of education than do Protestants. Differences between Catholics and Protestants are especially large in Argentina, where 44% of Catholics have at least a secondary school education, compared with 24% of Protestants.

In the U.S., religiously unaffiliated Hispanics are somewhat more likely than Catholics or Protestants to report having a high school education or more. 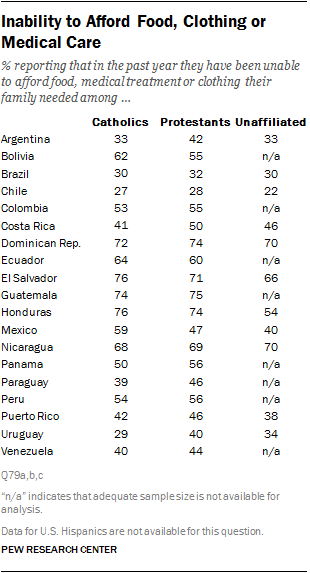 The survey asked respondents whether in the past year they had been unable to afford food, medical care or clothing that their family needed. No clear pattern emerges linking religious identity to material deprivation. In most countries, similar percentages of Catholics, Protestants and the religiously unaffiliated report struggling to afford at least one of these basic necessities.

In a few countries – Argentina, Costa Rica and Uruguay – more Protestants than Catholics report being unable to afford food, medical care or clothes.

In no country are the unaffiliated significantly more likely than Catholics or Protestants to report impoverishment. 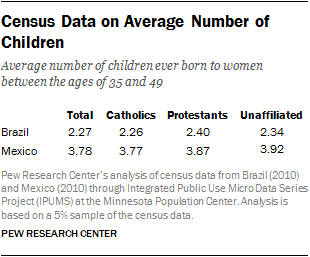 The survey asked all women how many children they have ever borne. However, due to small sample sizes of women just past their prime child bearing years (that is, between the ages of 35 and 49), the survey is unable to determine differences in fertility rates among religious groups.

In two countries – Mexico and Brazil – census data on both religious identity and household composition are available. Pew Research’s analysis of the census data shows that, on average, Protestant women have slightly more children than Catholic women in these two countries. 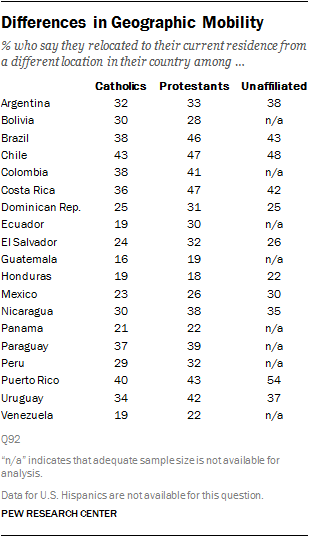 The survey asked respondents if they have lived in their current location their entire life, or if they previously lived in a different part of their country. In four countries, more Protestants than Catholics have relocated at some point in their lives. In Costa Rica, for example, nearly half of Protestants (47%) say they have relocated, compared with 36% of Catholics. This pattern also is seen in Ecuador, El Salvador and Nicaragua. Elsewhere, there are no statistically significant differences between Catholics and Protestants in terms of geographic mobility.

Next: Appendix A: Methodology
← Prev Page
Page3Page4Page5Page6Page7Page8Page9Page10You are reading page11Page12Page13
Next Page →