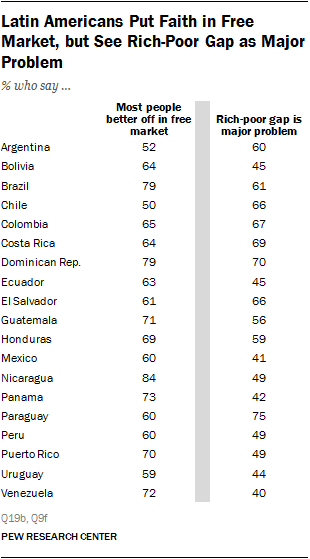 On the whole, Latin Americans embrace free-market principles. Majorities in most countries surveyed say that people are better off in a free-market economy. Yet majorities in half of the countries point to the gap between rich and poor as a major national problem.

Overall, Catholics and Protestants differ little in their views of the free market or their concern about the divide between the haves and have-nots. Members of the two religious traditions also overwhelmingly agree that the state has a responsibility to help those living in poverty.

However, when asked what Christians can do to help those in need, Catholics and Protestants offer somewhat divergent views. Catholics are more likely than Protestants to say that the best way for Christians to help the poor is through works of charity, while Protestants place greater emphasis on bringing the poor to Christ.

At the same time, Protestants are more likely than Catholics to report that they, or their church, engage in charitable works or offer assistance to those in need.

Free Markets and the Problem of Poverty

Despite widespread agreement that the free market is a boon for most people, Latin Americans, regardless of religious affiliation, also agree that it is the responsibility of the government to take care of very poor people who cannot take care of themselves. At least eight-in-ten express this view in each of the countries surveyed, including 97% of adults in the Dominican Republic and Paraguay.

Catholics, Protestants and the religiously unaffiliated generally share the view that the state should provide for the poor and needy.

Views on Christians Helping the Poor 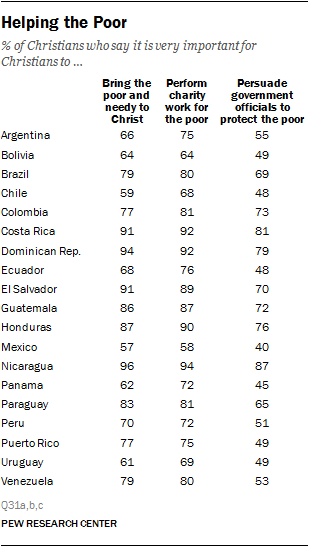 Beyond the role of government in addressing the problem of poverty, the survey asked Christian respondents how important it is for followers of the Christian faith to help those in need by performing works of charity, bringing the poor to Christ or persuading government officials to protect the rights of the poor and needy.

Strong majorities of Catholics and Protestants say that charitable acts are a very important means by which Christians can assist the poor. Similarly, in nearly every country, clear majorities of both Catholics and Protestants think bringing the poor and needy to Christ is very important. Among each group, fewer respondents say political advocacy on behalf of the poor is as important as either charity work or evangelism.

Although many Catholics and Protestants in Latin America agree there are multiple ways that Christians can assist the poor, members of the two religious traditions diverge when it comes to the question of which is the single most important means of helping those who cannot help themselves.

Across the region, Protestants are more likely than Catholics to place the greatest emphasis on bringing the poor and needy to Christ. Some of the widest gaps on this measure are found in Argentina and Colombia; in each country, 33 percentage points separate the shares of Protestants (51% and 56%, respectively) and Catholics (18% and 23%) who say evangelism is the most important way Christians can assist the poor. Protestants are also far more likely than Catholics to place the most emphasis on bringing the poor to Christ in Bolivia (32-point gap), Paraguay (31) and Peru (31). 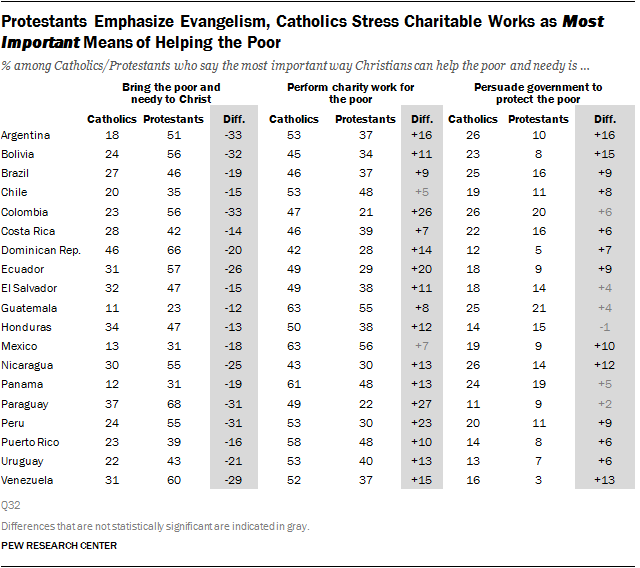 Catholics, for their part, tend to emphasize performing works of charity to address the needs of the poor. In all but two of the countries surveyed, Catholics are significantly more likely than Protestants to point to charity as the most important way Christians can help those who are unable to help themselves – especially in Paraguay and Colombia.

Significant minorities of Catholics also say that persuading government officials to protect the rights of the poor is the single most important way Christians can help the poor and needy. In most countries polled, Catholics are considerably more likely than Protestants to take this view, with the widest differences observed in Argentina (16-point gap) and Bolivia (15).

The survey also asked respondents whether the church or house of worship that they attend most often is engaged in activities that benefit the poor and needy – bringing people to Christ, helping people find jobs or persuading government officials to protect the rights of the poor. In nearly all countries, majorities of both Catholic and Protestant churchgoers say their local congregation reaches out to bring others to Christ. However, Protestants are more likely than Catholics to report that their church evangelizes. For example, in Brazil, 93% of churchgoing Protestants say their church brings others to Christ, compared with 66% of churchgoing Catholics – a gap of 27 percentage points. Similar differences are found in Mexico (22-point gap), Bolivia (22), Argentina (21) and Uruguay (20), while an even bigger gap is seen in Chile (38 points). 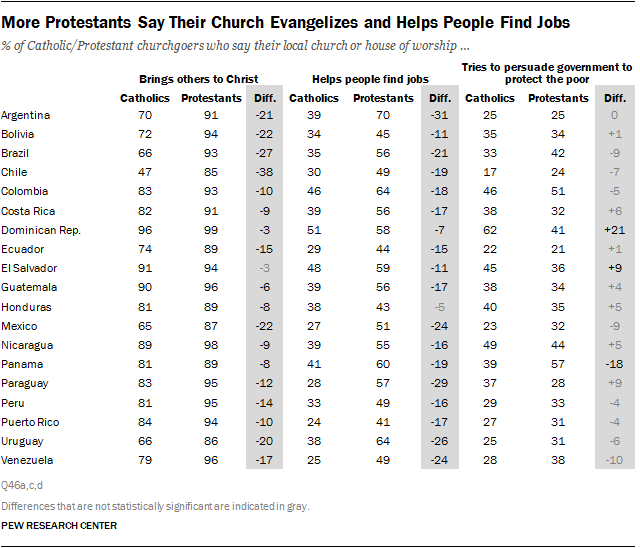 In most Latin American countries, Protestants also are more likely than Catholics to report that their church helps people find employment. This is especially true in Argentina, Paraguay, Uruguay, Mexico and Venezuela.

Protestants and Catholics differ less in terms of reported church involvement in political advocacy on behalf of the poor. There is no clear pattern with regard to whether Protestant or Catholic churches are more engaged in persuading the government to protect the poor.

Many Latin Americans say they themselves work with others in their community to provide for poor people’s needs through charitable works. More Protestants than Catholics say they personally engage in charity work – despite the fact that Catholics place greater emphasis on charitable acts as the single most important means of assisting those in need. (For more details on the proportions of Catholics and Protestants in each country who engage in charitable work, see this report’s Overview.)

In addition to differences by religious affiliation, the survey finds that people ages 35 and older tend to be more active in charity work to help the poor. Significant gaps between the charitable activities of younger and older Latin Americans are seen in Argentina, Colombia, Costa Rica, the Dominican Republic, Honduras and Paraguay.

On the separate question of political advocacy to protect the rights of the poor, the survey finds relatively few people who say they personally engage in such activities. Nearly a third of Panamanians (30%) say they have tried to help the poor in this way. In other countries, however, no more than one-in-six people say they have done this in the last 12 months.

In a few countries, older adults are more likely than those under the age of 35 to say they have pushed for government action on behalf of the poor. Overall, the survey does not find significant differences between Protestants and Catholics on this question.

Next: Chapter 7: Views on Politics
← Prev Page
Page3Page4Page5Page6You are reading page7Page8Page9Page10Page11Page12Page13
Next Page →