By way of comparison, nearly a third (32%) of Hispanics in the U.S. report having switched their religious faith.

In most Latin American countries polled, religious switching has led to a net loss for Catholics and a net gain for Protestants. People unaffiliated with any faith also have experienced significant net gains in a few countries.

The survey finds that the movement away from Catholicism has occurred among people of all ages and socio-economic levels. But some demographic patterns are apparent among Catholic-to-Protestant converts: In a few countries, former Catholics who are now Protestant are significantly more likely than current Catholics to have relocated within their country. And while in most countries Catholics and Catholic-to-Protestant converts report similar levels of education, there are a few places (Argentina, Costa Rica and Bolivia) where those who have left the Catholic Church for Protestantism are less likely than Catholics to have at least a secondary school education.

When former Catholics who are now Protestant are asked whether certain factors were important in their decision to leave the Catholic Church, at least two-thirds in most countries say they wanted a more personal experience with God. Other common reasons people give for leaving the church are that they were looking for a different style of worship or a church that helps its members more. No more than about one-in-four Catholic-to-Protestant converts in any country surveyed say they changed their religious faith because they were seeking a better financial future. 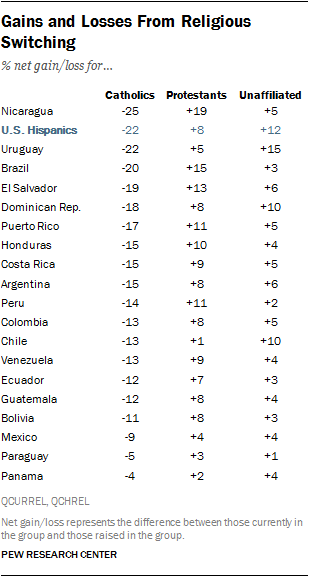 Conversion out of Catholicism is significantly outpacing conversion into Catholicism, leading to a net loss for Catholics in most countries included in the survey. Much of this religious switching has resulted in net gains for Protestantism across the region.

In Nicaragua, for example, roughly one-in-four (26%) respondents are former Catholics. Hardly any Nicaraguans reported converting into Catholicism, leading to a net loss of 25 percentage points for Catholics in the country. (See the table below for percentages entering and leaving each group.)

People with no religion also have experienced double-digit gains in a few countries, as more adults report having switched into the ranks of the religiously unaffiliated than report switching out. The unaffiliated have seen significant net gains in Uruguay (plus 15 points), Chile (plus 10 points) and the Dominican Republic (plus 10 points).

How Net Gains and Losses for Religious Groups Are Calculated

Net gains and losses are defined as the difference between the percentage of the population in each country that was raised in a religious group and the percentage currently in that group. In this table, “percent entering” refers to respondents who currently identify as Catholic, Protestant or unaffiliated but were not raised in their current faith. “Percent leaving” refers to respondents who were raised Catholic, Protestant or unaffiliated but no longer identify with their childhood faith. 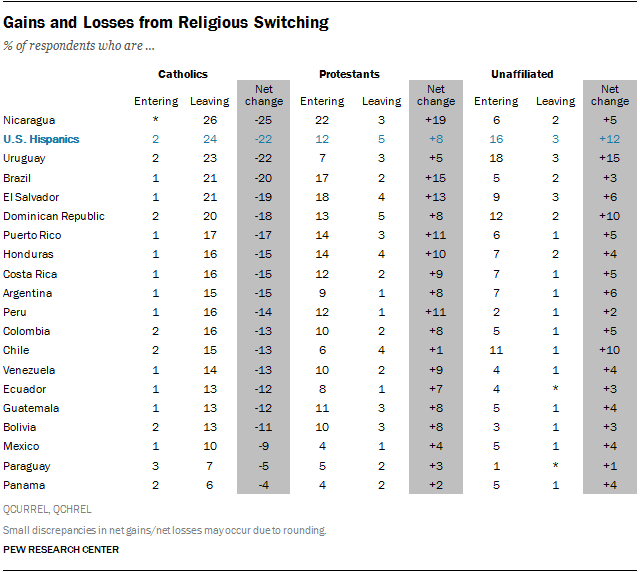 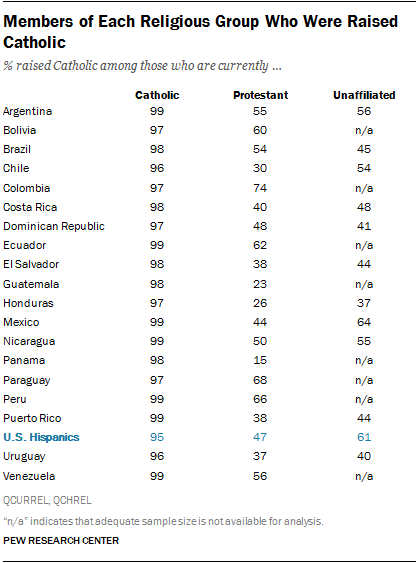 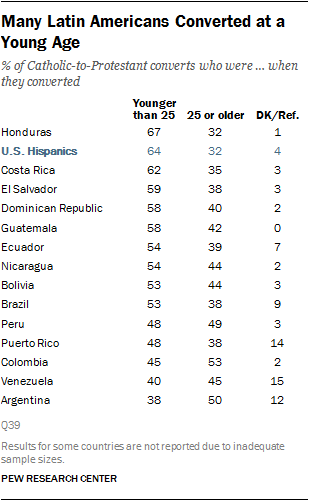 In most countries surveyed, about half or more of Catholic-to-Protestant converts say that they left Catholicism when they were younger than 25. Roughly six-in-ten or more Catholic-to-Protestant converts fall into this category in the Dominican Republic (58%), Guatemala (58%), El Salvador (59%), Costa Rica (62%) and Honduras (67%). Among U.S. Hispanics as well, a majority of converts (64%) say they became Protestants before age 25.

In Argentina, Colombia and Peru, about half of converts from Catholicism to Protestantism say they converted when they were 25 or older.

In most countries for which sample sizes of converts are large enough to permit analysis, fewer than half of former Catholics say they were attending Mass at least once a week right before they left the Catholic Church. By comparison, a majority of Catholic-to-Protestant converts now say they attend church weekly. 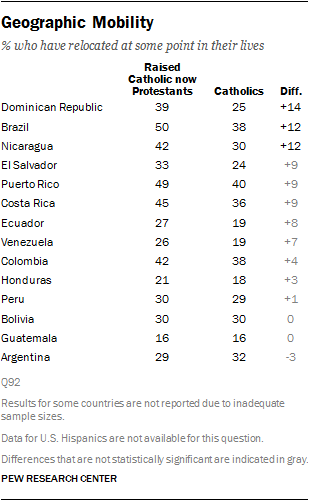 The survey finds some other demographic patterns among those who have switched faiths.

In the Dominican Republic, Brazil and Nicaragua, Catholic-to-Protestant converts are more likely than current Catholics to have relocated within their country. In Brazil, for example, half of those who converted to Protestantism after being raised in the Catholic Church report having moved to their current residence from a different part of Brazil; among current Brazilian Catholics, 38% say they have relocated.7 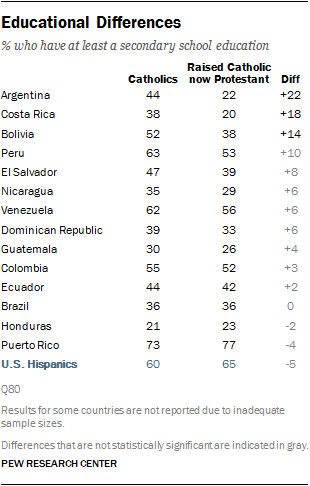 In most countries, Catholics and Catholic-to-Protestant converts report similar levels of education. But in a few countries, current Catholics have more formal education than do those who have converted to the Protestant faith.

The survey asked former Catholics whether each of eight factors was or was not an important reason they are no longer Catholic. Across the region, former Catholics who are now Protestant most frequently say they “wanted a more personal experience with God.” Clear majorities of Catholic-to-Protestant converts in each of the countries polled say this was an important reason for switching faiths, including roughly nine-in-ten in El Salvador (93%), Guatemala (91%) and Nicaragua (90%). Majorities in nearly every country also say that they were attracted to the style of worship at their new church. At least half of converts in most countries surveyed also say they were seeking a church that placed greater emphasis on morality. Many also point to the fact that they found a church that reaches out and helps its members more. In nearly every country, at least half say that recruitment by a Protestant church member was an important reason they are no longer Catholic. 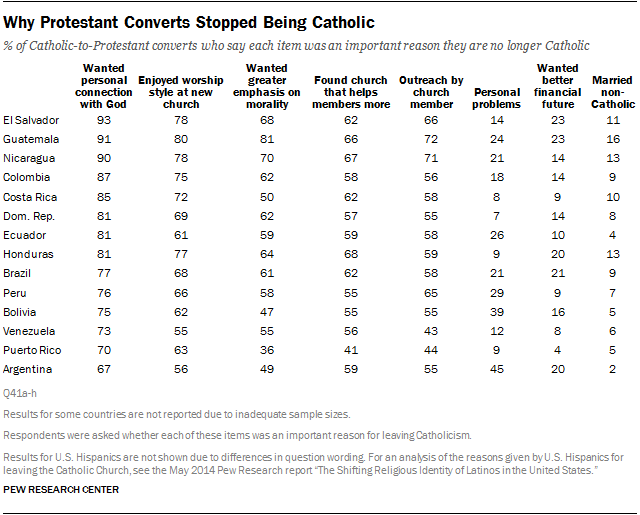 Relatively few former Catholics say that crises or life circumstances – such as personal problems, marriage to a non-Catholic or financial issues – were important reasons for leaving the Catholic Church in favor of Protestant Christianity.