The previous chapter focused on findings about the extent to which Hispanics engage in spirit-filled religious practices associated with renewalist Christianity, such as speaking in tongues, divine healing and prophesying. Some Hispanics also incorporate indigenous or Afro-Caribbean practices into their religious experiences, such as seeking help from someone with special powers to heal the sick, using incense or herbs in a ceremony for spiritual cleansing, or making offerings to spiritual beings.

Some Latinos take part in other forms of spiritual expression that may reflect a mix of Christian and indigenous influences. For instance, a majority of Latinos say they believe people can be possessed by spirits, and about three-in-ten say they have made offerings to spiritual beings or saints.

Whether these practices derive mainly from indigenous or traditional Christian sources – or a combination of the two – they point to a strong sense of the spirit world in the everyday lives of many Latinos. 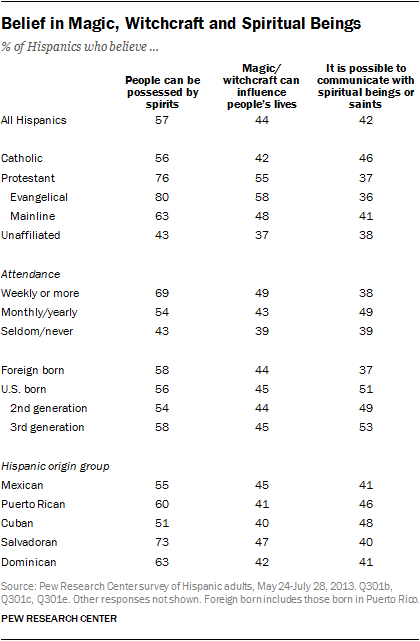 Belief that people can be possessed by spirits is more common among Latino evangelical Protestants (80%) than among mainline Protestants (63%), Catholics (56%) or the religiously unaffiliated (43%).

A majority of evangelical Protestants (58%) say that magic or witchcraft can influence people’s lives. About half of mainline Protestants (48%) believe this, as do 42% of Catholics and 37% of the unaffiliated. Meanwhile, Latino Catholics (46%) are somewhat more likely than other groups to say they believe it is possible to communicate with spiritual beings or saints.

Roughly three-quarters of Hispanics of Salvadoran origin (73%), including 87% of Salvadoran Protestants, believe people can be possessed by spirits, compared with about six-in-ten or fewer among Hispanics of other origin groups. There are few differences across Hispanic origin groups regarding belief in the influence of magic or possible communication with spirits. 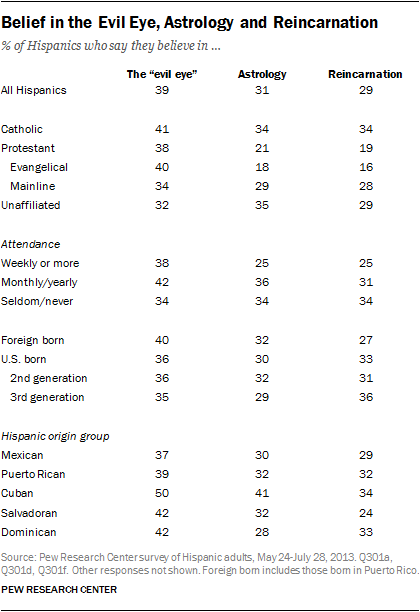 About four-in-ten Hispanics (39%) say they believe in the “evil eye,” or that certain people can cast curses or spells that cause bad things to happen. Roughly three-in-ten believe in astrology (31%) or reincarnation (29%).

Among Hispanic origin groups, Cuban Americans are somewhat more likely than others to believe in the evil eye (50%) or astrology (41%). There are no significant differences across origin groups with respect to belief in reincarnation.

About one-in-seven Hispanics overall have participated in each of the indigenous religious practices included in the survey. One-in-five or fewer Hispanics in each major religious group say they have had black magic practiced on them or on someone close to them; roughly one-in-seven have sought help from a curandero, shaman, spiritist or someone else with special powers to heal the sick; and similar shares have used materials such as incense, herbs, tobacco or liquor in ceremonies for spiritual cleansing or healing. There are two notable exceptions: Just 5% of Hispanic mainline Protestants say they have ever sought help from a healer, and only 6% of evangelical Protestants say they have used incense or herbs in healing ceremonies.

U.S.-born Hispanics are slightly more likely than immigrants to say that they have used incense or herbs in spiritual cleansing ceremonies (15% vs. 11%), though there are virtually no differences by nativity on other indigenous practices.

There are no major differences in these practices by Hispanic origin group, though Cubans and Puerto Ricans tend to be slightly more likely than other groups to have had some of these experiences.

Prayers and Offerings to Saints 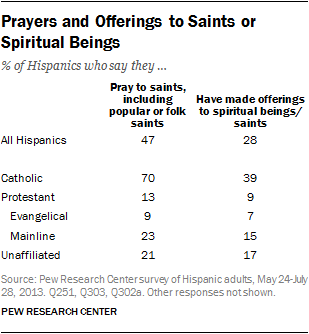 Nearly half of Hispanics (47%) say they pray to saints to ask for help when they face difficult moments in their lives.22 Fully seven-in-ten Catholics say they direct their prayers in this way, while 23% of mainline Protestants, 21% of the religiously unaffiliated and 9% of evangelicals say the same.

About three-in-ten Hispanics (28%) say they have made offerings such as food, drink, candles or flowers to spiritual beings or saints. While making offerings such as candles or flowers to saints is a traditional Catholic practice, other offerings (such as food or drink) are common among practitioners of indigenous and Afro-Caribbean faiths as well. Catholics are at least twice as likely as members of other religious groups to say they have made offerings to saints or spiritual beings. About four-in-ten Catholics (39%) have made such offerings, compared with roughly one-in-six of the religiously unaffiliated (17%) and mainline Protestants (15%) and only 7% of evangelicals.