One of the major findings of the 2006 National Survey of Latinos and Religion was that a large proportion of Latinos were attending churches with services in Spanish, Latino clergy and heavily Latino congregations. The new Pew Research survey also finds that a large share of Latinos attend churches with these “ethnic church” characteristics, but the share is somewhat smaller than it was in 2006.

Characteristics of the Ethnic Church 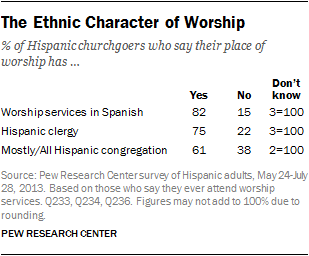 About eight-in-ten Hispanic churchgoers (82%) say their church offers Spanish-language services, 75% say there is Hispanic clergy at their church, and 61% say that most or all of the other people they worship with also are Hispanic. And fully half (51%) say the place of worship they attend most often has all three of these characteristics. 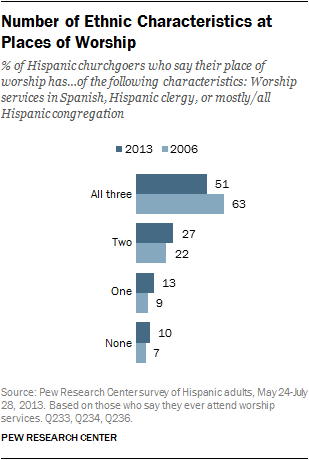 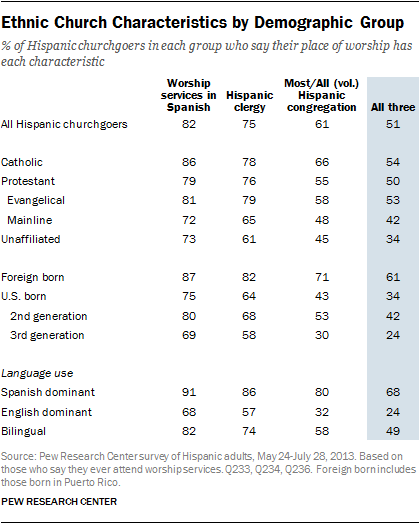 Among Latinos of all major religious groups, majorities of those who attend worship services say their place of worship has Spanish-language services and Latino clergy. And about two-thirds (66%) of Catholic churchgoers say most or all of their fellow congregants are also Latino, compared with roughly six-in-ten evangelical Protestant churchgoers (58%), and roughly half or fewer mainline Protestants (48%) and unaffiliated Latinos who ever attend services (45%).

Attendance at an ethnic church is more common among foreign-born than U.S.-born Hispanics. Among Hispanics who were born outside the United States, seven-in-ten or more churchgoers say that their place of worship offers services in Spanish (87%), has Hispanic clergy (82%) and is a mostly Hispanic congregation (71%). Among native-born churchgoing Hispanics, the numbers are lower on all three measures. Indeed, in every major religious group in the survey, immigrant churchgoing Hispanics tend to be more likely than those who are native born to say that their place of worship has these characteristics. 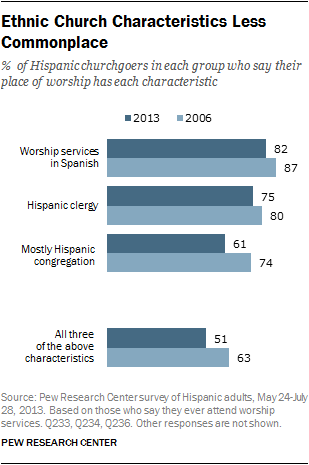 Each of these church characteristics is somewhat less common now than in 2006. The share of Latino churchgoers whose place of worship offers Spanish-language worship services is down five percentage points (from 87% in 2006 to 82% in 2013), as is the share whose church has Latino clergy (from 80% to 75%).

The share of churchgoers who say all or most of the other congregants at their place of worship are also Latino is down 13 points, from roughly three-quarters in 2006 to about six-in-ten in 2013. And compared with 2006, a somewhat larger share say that few or no other people at their place of worship are Latino (16% today vs. 10% in 2006). With few exceptions, these changes have taken place across religious, nativity and language-dominance groups.

While about eight-in-ten Latinos who attend religious services say that services are offered in Spanish at their place of worship, a smaller majority — about six-in-ten (62%) — say the services they have attended in the past year have been in Spanish every time (36%) or most of the time (26%). About a third say most (17%) or every (17%) service they attended was in English. 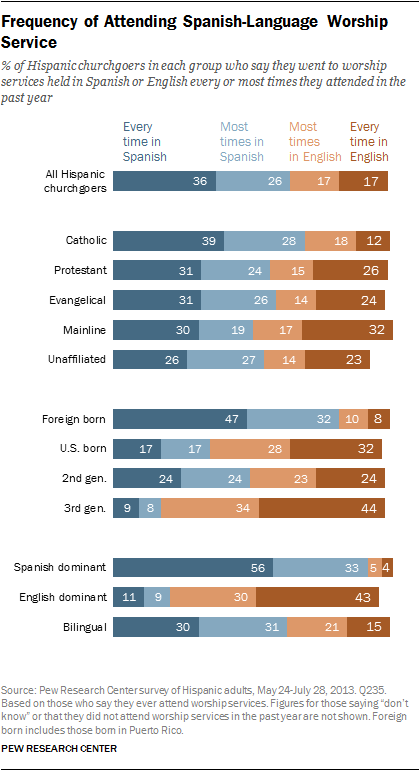 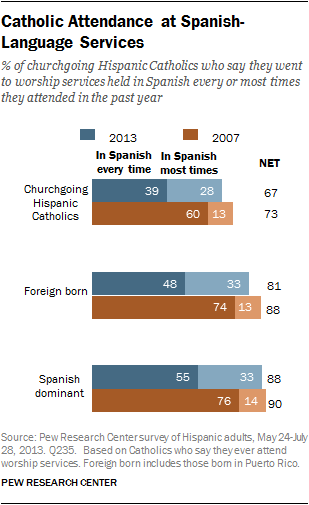 While two-thirds of Hispanic Catholic churchgoers say that all or most of the services they have attended in the past year were in Spanish — a share roughly similar to 2007, when 73% of Hispanic Catholic churchgoers said the same thing — the share who say that every service they attended was in Spanish has dropped from 60% in 2007 to 39% in 2013. A corresponding increase occurred in the percentage that says that they attend services most times in Spanish (13% in 2007 vs. 28% today). (In 2007, the question was asked only of Catholics. Therefore, trend data for other religious groups are not available.)

The change could be due, at least in part, to fewer of those services being offered. In 2007, 91% of churchgoing Hispanic Catholics said that the parish they attend most often offers Spanish-language Mass; today, 86% say the same, a slight but significant decrease. At the same time, preferences for worship in Spanish have also declined, as discussed below.

Preferences for an Ethnic Church 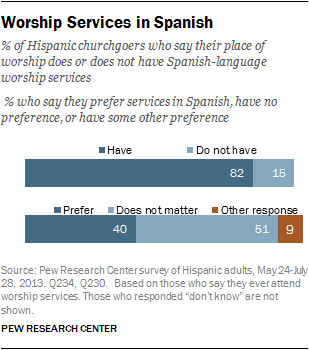 While strong majorities of Hispanic churchgoers say the place they attend most often offers worship services in Spanish, has Hispanic clergy, and that a majority of fellow congregants are also Hispanic, many fewer express a preference for each of these elements; a majority say that each does not matter.

Among Hispanics who say they ever attend worship services, twice as many attend a church that offers Spanish-language services as say they would prefer a church that offers this (82% vs. 40%). About half say it does not matter to them if services are in Spanish (51%), and 9% volunteer that they prefer to attend services in English (8%) or that they have some other preference (1%). 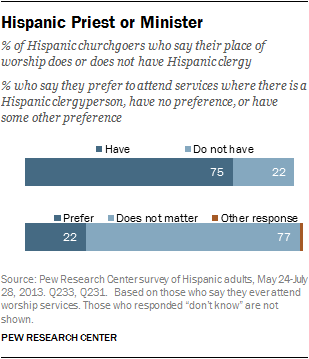 Three-quarters (75%) of Latino churchgoers attend a church where there is Latino clergy, though about as many (77%) say it does not matter to them whether there is a Latino minister or priest. And 61% of churchgoing Latinos say that the place of worship they attend most often is comprised of all or mostly fellow Latino, but just 18% express a preference for such a congregational makeup; most say it does not matter to them.

The pattern is similar across religious groups. More churchgoers in most religious groups say it does not matter to them whether these elements of the ethnic church are present in their places of worship than say they prefer these elements. Catholics are an exception; while 48% say the language of the service does not matter, a similar share (46%) prefer worship services in Spanish. The balance of opinion on this issue has shifted in recent years; in 2007, a majority of Hispanic Catholics (56%) said they would prefer to attend services in Spanish, and just over a third (36%) said they did not have a language preference. This change is likely due, at least in part, to the decline in the percentage of Hispanic Catholics who use Spanish as their primary language, from 55% in the 2007 survey to 43% in 2013. In 2007, eight-in-ten Hispanic Catholic churchgoers who were Spanish-language dominant said they preferred worship services in Spanish. In the current survey, 74% of Spanish-dominant Hispanic Catholic churchgoers express this preference, though this apparent decline is not statistically significant. (In 2007, this question was asked only of Catholics. Therefore, there is no trend data for other religious groups.) 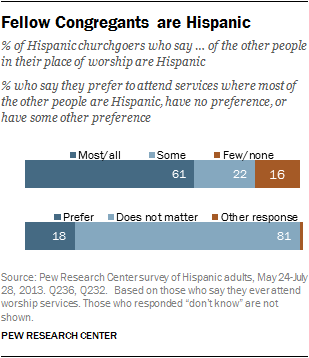 Across religious groups, foreign-born Hispanics are far more likely than U.S.-born Hispanics to prefer to attend worship services with ethnic church elements. More than half of Hispanic immigrant churchgoers (59%) would prefer a worship service held in Spanish, compared with 10% of Hispanic churchgoers born in the United States. Foreign-born churchgoers are also more likely than the native born to prefer services where there is Hispanic clergy (31% to 8%) and a mostly Hispanic congregation (26% to 6%).

Perhaps not surprisingly, a majority (72%) of church-attending Hispanics whose primary language is Spanish say they would prefer to attend a church that offers Spanish-language worship services. But just a minority of Spanish-dominant Hispanics say they prefer to have Hispanic clergy (35%) or a mostly Hispanic congregation (30%).

Nearly six-in-ten Hispanic churchgoers (57%) say their church maintains close ties with countries in Latin America by sending money or missionaries to these countries or receiving clergy from countries in the region. About one-in-five Hispanics say that their place of worship does not maintain close ties to Latin American countries (21%) and the same share say they do not know if this is the case (21%). 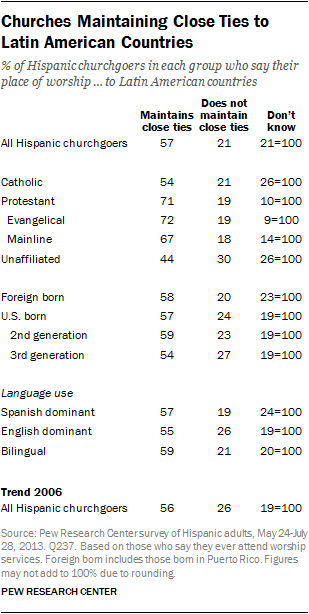 Among religious groups, churchgoing Protestants are more likely than Catholics to say that their church maintains close ties with Latin America (71% and 54%, respectively). Protestants also are significantly less likely than Catholics to say that they are unsure of their church’s ties to Latin America (10% to 26%). And a plurality (44%) of religiously unaffiliated Hispanics who ever attend religious services say the place of worship they attend most often maintains close ties to countries in Latin America, while 30% say it does not and a quarter (26%) say they do not know about their church’s ties.

There are no significant differences by nativity or by language dominance when it comes to whether or not one’s church maintains ties with Latin American countries.