Two-thirds of Hispanics report that their current religion is the same as the one in which they were raised, while about a third now belong to a religion that is different from their childhood faith. Religious switching is slightly more common among U.S.-born Hispanics than among those born outside the U.S.

Overall, Catholicism has had a considerable net loss due to changes in religious affiliation among Latinos. There have been net gains from religious switching among Protestants and the religiously unaffiliated.

The survey asked Latinos whether certain factors were important in their decision to change religions. A majority of those who have switched say an important reason for switching was that they just gradually drifted away from the religion in which they were raised. Almost as many say they stopped believing in the teachings of their childhood religion.

On a separate question about the main reason for switching religions, Latinos cite various factors, including dissatisfaction with religious institutions, practices or people; changes in personal spirituality; and family or life factors.

The survey also allows some analysis of whether Latinos who were raised Catholic and have switched to another faith or become religiously unaffiliated retain elements of Catholic beliefs or practices. This analysis can be found at the end of Chapter 4.

The Direction of Religious Switching 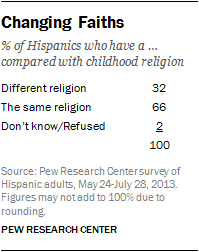 Nearly one-third of Hispanics (32%) no longer belong to the religion in which they were raised. This figure is based on switching between major religious traditions and does not include changes from one Protestant tradition to another (such as from Methodist to Lutheran). By comparison, the Pew Research Center’s 2007 U.S. Religious Landscape Survey found that 28% of adults in the U.S. have switched religions.16 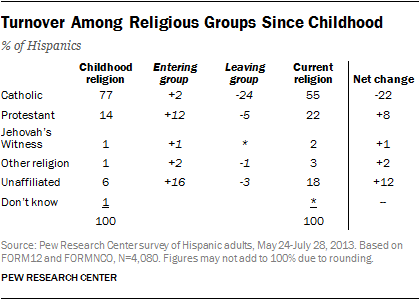 Among Latinos, Catholicism has experienced a net loss due to religious switching. Three-quarters of Latinos (77%) were raised Catholic, but just slightly more than half (55%) report that their current religious affiliation is Catholic. Only a small share of Latinos (2%) have become Catholic after being raised in another faith or in no faith, while nearly a quarter (24%) of Latinos were raised Catholic and have left the faith, for a net loss of 22 percentage points.

The biggest net gains in religious affiliation due to switching have been among Hispanic Protestants and religiously unaffiliated Hispanics. While 14% of Hispanics were raised Protestant, 22% are currently Protestant, for a net gain of eight percentage points. Just 6% of Hispanics were raised with no religious affiliation, but about one-in-five (18%) are now unaffiliated, a net gain of 12 percentage points. 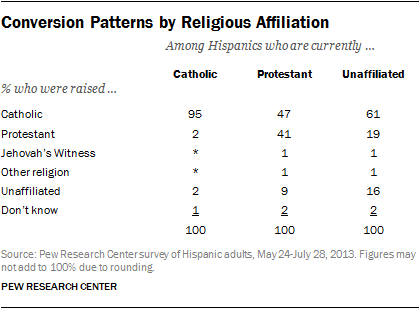 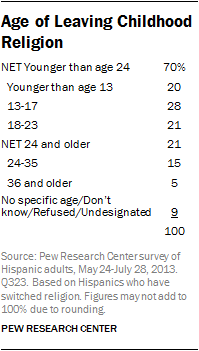 Among Latinos who no longer belong to their childhood religion, fully seven-in-ten say they made the change before they were 24 years old. This includes 20% who switched before age 13 and 28% who did so between ages 13 and 17. The median age at which Latinos report having switched religions is 17. Relatively few Latinos say they changed religions after age 35 (5%).

This pattern is consistent with the relatively young age of religious switching found among the general public in the Pew Research Center’s 2008 survey of a sample of respondents from the U.S. Religious Landscape Survey. In that survey, most respondents who left their childhood faith also did so before age 24, and a large majority did so before age 36. 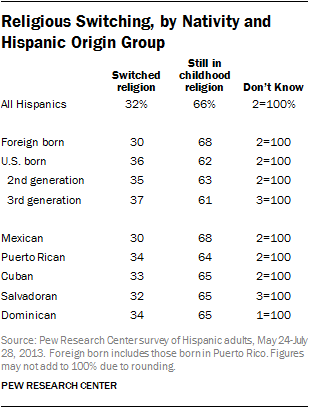 U.S.-born Latinos are slightly more likely than the foreign born to say that they no longer belong to their childhood religion; 36% of the native born have switched faiths, compared with 30% of the foreign born.

Among Latino immigrants who have switched religions, about half – 16% of all foreign-born Latinos – say they made the switch after coming to the U.S. But nearly as many – 13% of all foreign-born Latinos – switched religions before moving to the U.S. This may reflect some of the religious changes that are taking place in Latin America, where the shares of Protestants and the religiously unaffiliated have been growing in countries that historically have been overwhelmingly Catholic.. 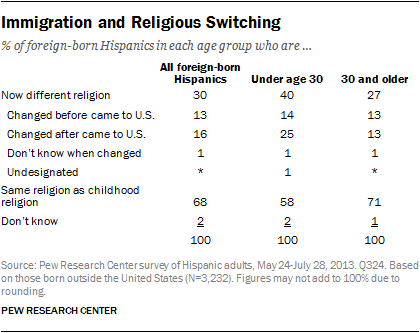 Why Latinos Have Left Their Childhood Religion 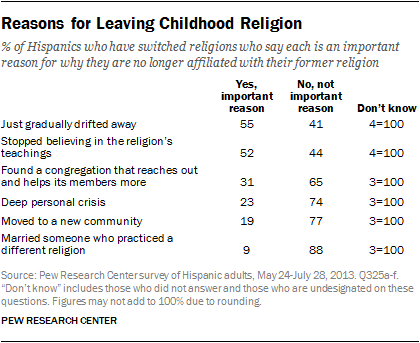 The survey asked Latinos whether certain factors were important in their decision to leave the religion in which they were raised. A majority of those who have left their childhood religion (55%) say they just gradually drifted away. Nearly as many (52%) say they stopped believing in the teachings of their childhood religion. About three-in-ten (31%) say they found a different congregation that reaches out and helps its members more. Roughly one-in-five cite a deep personal crisis (23%) or a move to a new community (19%) as important reasons for switching faiths. And about one-in-ten (9%) say marrying someone who practiced a different religion was an important reason for changing. 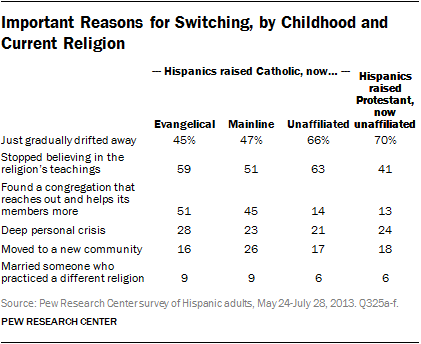 Former Catholics, whether they left Catholicism for the Protestant faith or for no faith, are particularly likely to say that an important reason for leaving the church was that they stopped believing in its teachings. About six-in-ten former Catholics (61%) say this was an important reason for switching. Among former Protestants who are now religiously unaffiliated, about four-in-ten (41%) say they stopped believing in the teachings of their childhood faith.

Survey respondents who have switched religions also were asked to describe in their own words the main reason that they are no longer part of the religion in which they were raised.

A third of those who have switched religions say that the main reason for the change had something to do with religious institutions, practices or people. This includes people who say they disagree with the worship of saints or the Virgin Mary, or idolatry more generally; people who cite hypocrisy, corruption, deception or contradictions in their previous church or religion, or religion in general; those who were generally dissatisfied with their previous religion; and people who found a religion they felt more comfortable with or liked better. The clergy sex abuse scandal in the Catholic Church, or the way the church handled it, was cited by 3% of those who are no longer affiliated with their childhood religion (the vast majority of whom were raised Catholic).

About one-in-ten Latinos who have left the religion in which they were raised (8%) cite family factors, such as marriage, as the main reason for switching. A similar share say their change had something to do with the beliefs or teachings of their childhood religion (10%), including that the religion did not focus enough on the Bible or the word of God. Just 3% say they changed religions mainly because of new circumstances in their life, such as moving to a new community.

Fully one-in-five Latinos (20%) give some other main reason for switching religions, including having drifted away or having stopped attending services (4%). Some say they practice more than one religion, or that they do not perceive themselves as having left their religion (3%).

Reasons for Latinos leaving their childhood religion vary somewhat, in expected ways, by the direction of the religious change. For example, among those who have left Catholicism and are now Protestant, responses referencing disapproval of the worship of saints or of the Virgin Mary (13%) were among the most common reasons given. Among those who have left their childhood religion and are now religiously unaffiliated, many said they stopped believing in their religion, started questioning their religion or lost their faith; 16% of former Protestants who are now unaffiliated and 13% of former Catholics who are now unaffiliated gave a response that fit into this category.