More than half of Latinos identify themselves as Catholic, while most of the remainder are closely divided between Protestants and those who say they have no religious affiliation.

The Religious Profile of Latinos

A majority of Latinos (55%) identify as Catholic, while most of the rest of the Latino population is roughly evenly divided between adherents of various Protestant traditions (22%) and those who are religiously unaffiliated (18%).

Hispanics are significantly more Catholic and less Protestant than is the public as a whole. The unaffiliated shares of the two groups are about the same.

Among Latino Protestants, there is a significantly higher proportion of born-again or evangelical Protestants than mainline Protestants (16% vs. 5%).

Three percent of Latinos identify with another Christian religion, including 2% who are Jehovah’s Witnesses.

Nearly one-fifth of Hispanics (18%) are not affiliated with any religion. This includes 3% who say they are atheist or agnostic and 15% who say their religion is nothing in particular. 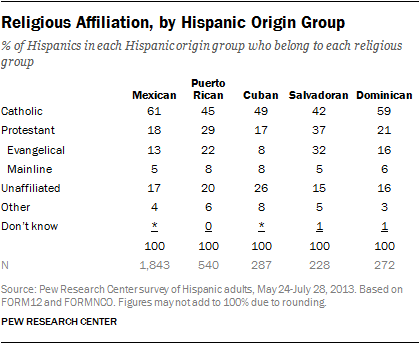 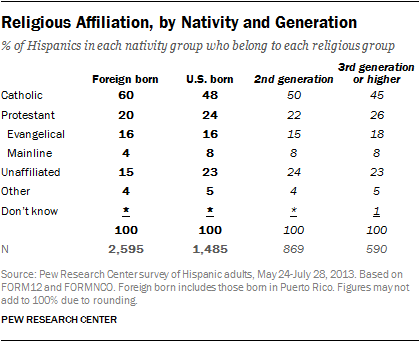 There are no significant differences in the religious profile of second- and third-generation Hispanics. 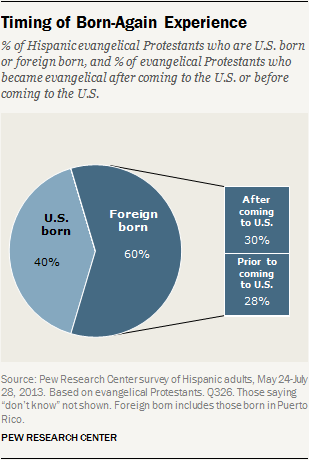 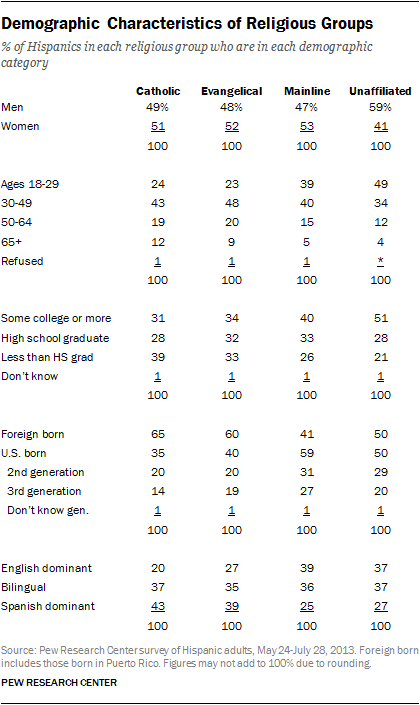 About two-thirds of Latino Catholics were born outside of the United States (65%), as were 60% of Latino evangelical Protestants. Fewer religiously unaffiliated Latinos (50%) and mainline Protestant Latinos (41%) are foreign born. Among the U.S. population as a whole, including children and adults, 13% are foreign born.

Latino Catholics and evangelical Protestants are also more likely to be Spanish-language dominant than either the religiously unaffiliated or mainline Protestants.

In 2006, the Pew Research Center conducted a major survey of Hispanics and religion. The question used to measure religious affiliation in that survey was different than the question that has been analyzed throughout this report. In the 2006 survey, the religious affiliation question was: “What is your religion – Catholic, Evangelical or Protestant Christian, Jehovah’s Witness, Mormon, Jewish, Muslim, or an Orthodox church such as the Greek or Russian Orthodox Church?”

This question worked well for measuring religious affiliation among Hispanics. But in the following year, Pew Research started to develop a large study of religion in the general public – the U.S. Religious Landscape Survey – at which point we adjusted our question measuring religious affiliation to better capture religious diversity in the United States, including the growing number of people who identify with no religion. The question used in the U.S. Religious Landscape Survey and in Pew Research surveys since then – including this survey of Hispanics – reads: “What is your present religion, if any? Are you Protestant, Roman Catholic, Mormon, Orthodox such as Greek or Russian Orthodox, Jewish, Muslim, Buddhist, Hindu, atheist, agnostic, something else, or nothing in particular?”

Using this “apples to apples” comparison, the share of Latinos who identify as Catholic has declined eight percentage points, from two-thirds (67%) in 2006 to about six-in-ten (59%) in 2013. The corresponding increases are about evenly distributed between Protestants, particularly evangelical Protestants, and those of no religious affiliation.