When it comes to various beliefs about biblical texts and religious figures and teachings, the survey does not reveal one clear pattern among Hispanics. On some questions – such as whether the Bible is the word of God and should be taken literally and whether Jesus will return to Earth in one’s lifetime – Hispanic evangelical Protestants exhibit higher levels of belief than do other religious groups. But on other questions – such as whether social problems can be solved by more people being “brought to Christ” and whether God grants health and wealth to believers with deep faith – members of different religious groups hold similar views.

For additional analysis of the beliefs of renewalist Hispanics on several of these questions, see Chapter 7. 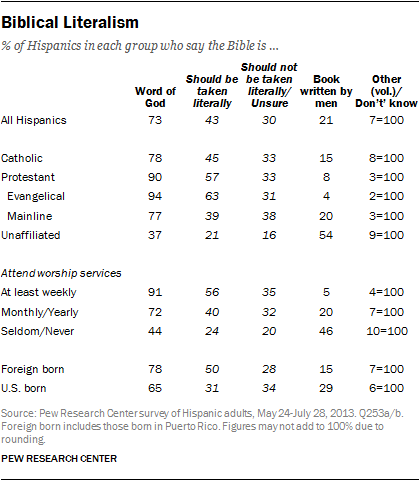 The Pew Research survey finds that roughly three-quarters of Hispanics (73%) believe that the Bible is the word of God, including 43% who say it should be taken literally, word for word. One-in-five Hispanics (21%) say it is a book written by men, and 7% give another response or decline to answer.

The Second Coming of Jesus 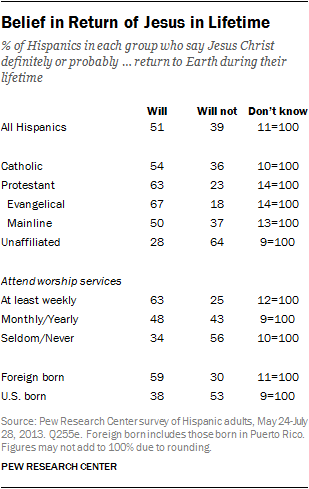 And those who attend worship services regularly are more likely than others to believe Jesus will return to Earth during their lifetime (63% of weekly attendees vs. 34% of those who seldom or never attend).

Beliefs About Mary and the Eucharist 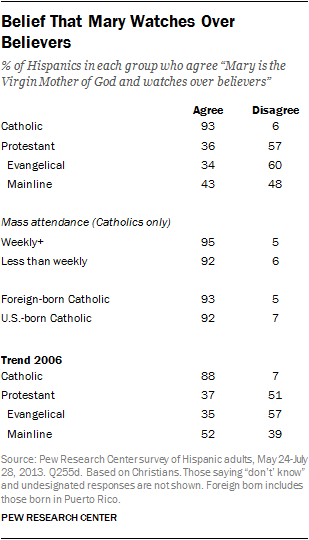 Among Catholics, vast majorities of both those who attend Mass weekly (95%) and those who attend less often (92%) agree that Mary is the Virgin Mother of God and watches over believers. And U.S.-born and foreign-born Catholics are about equally likely to agree with the statement.

Hispanic Catholics are slightly more likely to hold this belief now than in 2006, when 88% agreed that Mary is the Virgin Mother of God and watches over believers. Among other major religious groups, there has been no significant change in this belief since 2006. 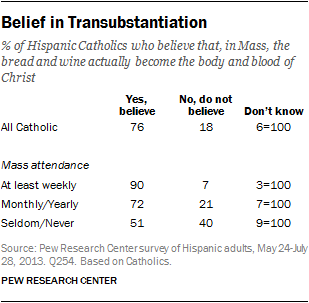 Belief in transubstantiation is strongly associated with frequency of church attendance. Fully nine-in-ten Catholics who attend Mass regularly hold this belief, as do 72% of those who attend services monthly or yearly. By contrast, only about half of Catholics who seldom or never attend Mass (51%) believe that the bread and wine actually become the body and blood of Christ.

There are no differences between foreign-born and U.S.-born Catholics on this issue.

A similar, though not identical, question in the 2007 call-back survey also found an overwhelming majority of Hispanic Catholics (87%) who said they believe the bread and wine used during Mass become the body and blood of Christ. 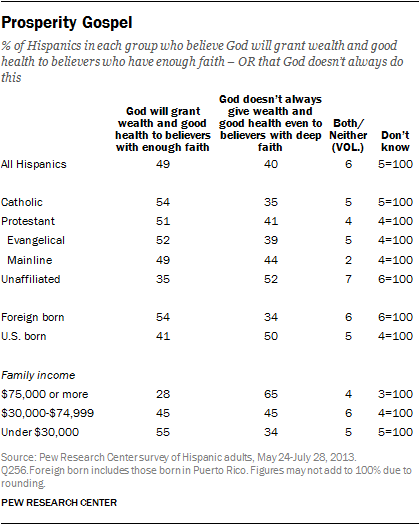 Differences among religious groups tend to be modest, especially when compared with other religious beliefs. About half of Latino Catholics (54%), evangelical Protestants (52%) and mainline Protestants (49%) believe in the prosperity gospel. A somewhat smaller share of the religiously unaffiliated (35%) also believe this.

Belief in the prosperity gospel is especially common among Pentecostal Protestants, among whom 65% say that God will grant wealth and good health to believers who have deep faith. (For more on Pentecostals’ and other renewalists’ beliefs, see Chapter 7.)

Belief in the prosperity gospel is associated with nativity; Latino immigrants are more likely than the U.S. born to hold this belief (54% vs. 41%). Those with lower family incomes (less than $30,000 per year) also are more inclined to say that God will grant wealth and good health to those with enough faith; more than half of lower-income Latinos (55%) say this, compared with 28% among those with annual family incomes of at least $75,000. 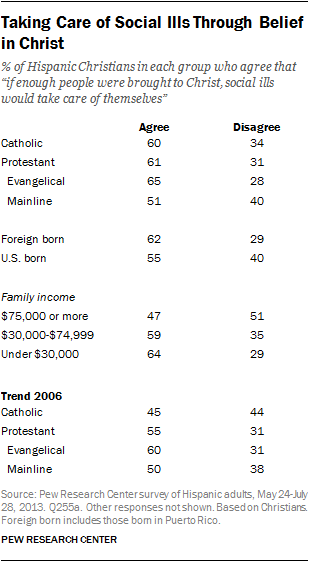 The Pew Research survey also asked respondents whether they agree or disagree with the following statement: “If enough people were brought to Christ, social ills would take care of themselves.” About two-thirds of Latino evangelical Protestants (65%) agree with this statement, as do six-in-ten Catholics (60%) and half of mainline Protestants (51%).

Compared with 2006, Hispanic Catholics are more likely to say that social ills can be addressed by people embracing Christ (45% in 2006 vs. 60% in 2013). Opinion among Hispanic evangelical and mainline Protestants is about the same as in 2006.

As with the prosperity gospel, beliefs on this topic are associated with nativity and family income. Hispanic immigrants are more likely than U.S.-born Hispanics to agree that social ills would take care of themselves if enough people were brought to Christ (62% vs. 55%). And those with a lower family income are more likely to agree with this statement than those with a higher income (64% among those earning less than $30,000, compared with 47% among those earning $75,000 or more).