One of the major findings of Pew Research’s 2006 survey of Hispanics and religion was the strong influence of Pentecostalism and other spirit-filled forms of Christianity. These lively, highly personal faiths emphasize the spiritually renewing “gifts of the Holy Spirit,” such as speaking in tongues, divine healing and direct revelations from God. Together, these religious traditions are sometimes referred to as the “renewalist” branch of Christianity.

Renewalist Christians, whether Protestant or Catholic, tend to be more religiously committed than their non-renewalist counterparts. And while charismatic Catholics resemble renewalist Protestants in some ways, they hold just as strongly as other Catholics – if not more so – to some traditional Catholic beliefs and practices.

Most Latino Protestants, Half of Latino Catholics are Renewalists 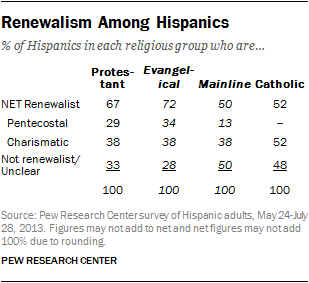 Two-thirds of Hispanic Protestants (67%) and about half of Hispanic Catholics (52%) can be classified as renewalists.21

The share of Hispanic Catholics who can be classified as renewalists has remained steady, with 52% saying they are either charismatic or Pentecostal Catholics, compared with 54% in 2006.

Renewalist practices — such as receiving divine healings or direct revelations, witnessing the devil or evil spirits being driven out of a person, or speaking or praying in tongues — are particularly common among Pentecostal Protestants. Roughly two-thirds of Latino Pentecostals say they have received a divine healing of an illness or injury (64%) or a direct revelation from God (64%). About six-in-ten say they have witnessed an exorcism (59%) and about half say they have spoken or prayed in tongues (49%).

Among Latino Pentecostal Protestants who attend worship services, the vast majority (97%) say the services they attend include people displaying signs of excitement and enthusiasm – such as raising their hands in praise, clapping, shouting or jumping – at least occasionally. More than half (57%) say such signs of excitement and enthusiasm are always present at their worship services. Smaller, though still substantial, majorities of churchgoing charismatic Protestants (86%) and non-renewalist Protestants (81%) also witness such displays at least occasionally during services.

Nearly all churchgoing Pentecostals (96%) also say that the worship services they attend include people speaking in tongues, “prophesying or receiving a word of knowledge” or praying for miraculous healings and deliverance, at least occasionally. Among charismatic Protestants who attend worship services, seven-in-ten observe such practices. By contrast, about half of non-renewalist Protestant churchgoers (53%) say they never observe these practices at worship services.

In this report, the term “Pentecostal” is used to describe those who belong to Pentecostal denominations, such as the Assemblies of God or the Assembly of Christian Churches.

The term “charismatic” is used to describe Christians, including Protestants and Catholics, who do not belong to Pentecostal denominations but who nevertheless describe themselves as either charismatic or Pentecostal Christians.

“Renewalist” is an umbrella term that refers to both Pentecostals and charismatics as a group.

This chapter focuses exclusively on Protestants and Catholics. While some other Christians, such as Orthodox Christians and Jehovah’s Witnesses, might describe themselves as either charismatic or Pentecostal, sample sizes in this survey do not allow for separate analyses of these groups.

While Catholics are less likely than Protestants to have these renewalist experiences, charismatic Catholics report experiencing some of these things at slightly higher rates than non-renewalist Catholics.

Hispanic renewalists stand out as having higher levels of religious commitment than their non-renewalist counterparts on measures such as frequency of church attendance, importance of religion in their lives and frequency of prayer. Hispanic renewalists also tend to report more involvement in religious practices outside of worship services than do non-renewalists, and they are more likely to hold a leadership position in their place of worship. (For additional analysis of these religious practices, see Chapter 3.) 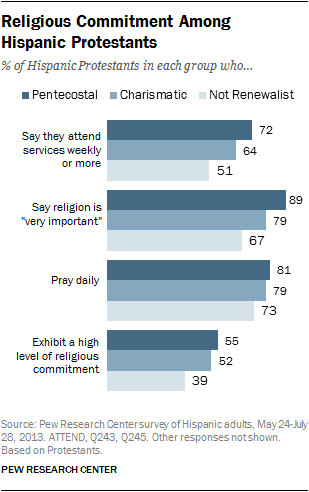 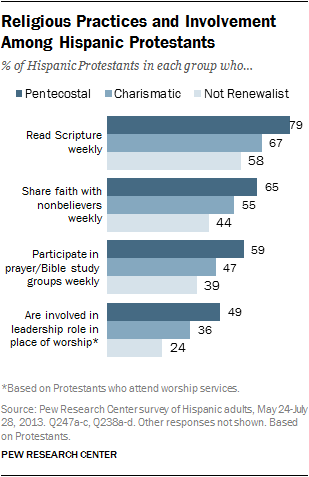 About half of churchgoing Latino Pentecostals (49%) are involved in some kind of leadership role in their church, such as serving as a lay minister, a member of the church council, a leader of a small group or ministry or a Sunday school or religious education teacher. By comparison, 36% of charismatic Protestants and about a quarter of non-renewalist Protestant churchgoers (24%) hold such a role in their place of worship. 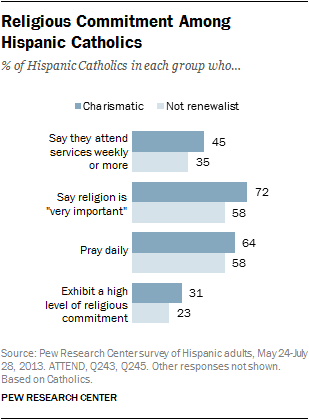 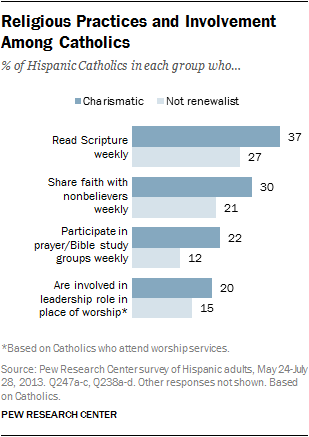 Similarly, charismatic Catholics are more likely than non-renewalist Catholics to engage regularly in religious practices outside of worship services, such as reading Scripture at least once a week (37% of charismatic Catholics vs. 27% of non-renewalist Catholics), sharing their faith with nonbelievers at least once a week (30% vs. 21%) or attending a prayer group or Bible study group weekly (22% vs. 12%). Additionally, charismatic Catholics who attend worship services are slightly more likely than other churchgoing Catholics to hold a leadership role in their parish, such as serving as a Eucharistic minister or religious education teacher (20% vs. 15%).

Renewalism and Beliefs About the Bible, Return of Jesus Christ 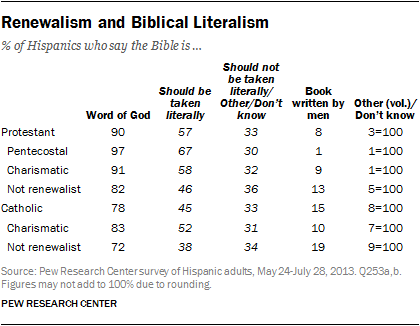 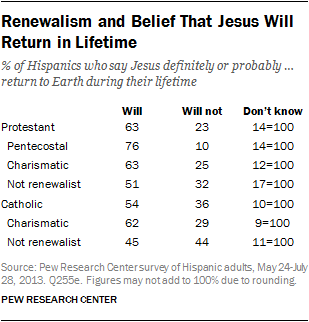 Hispanic charismatic Catholics are more likely than non-renewalist Catholics to take a literalist view of the Bible (52% vs. 38%). They also are more likely to believe that Jesus Christ will either definitely or probably return during their lifetime (62% vs. 45%).

(For more on these beliefs, see Chapter 6.) 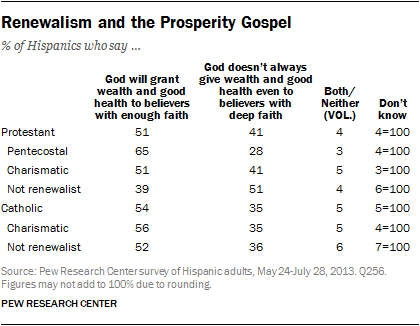 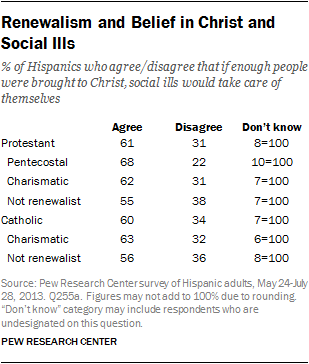 About two-thirds of Latino Pentecostal Protestants (68%) also believe that if enough people were brought to Christ, social ills would take care of themselves. A similar share of charismatic Protestants (62%) hold this belief, as do 55% of non-renewalist Protestants.

(For more on these beliefs, see Chapter 6.) 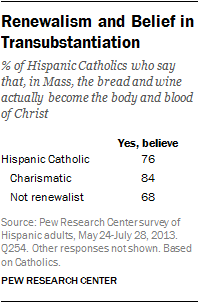 A majority of Catholics (76%) believe that in Mass, the bread and wine actually become the body and blood of Christ; charismatic Catholics (84%) are even more likely than non-renewalist Catholics (68%) to believe in transubstantiation. 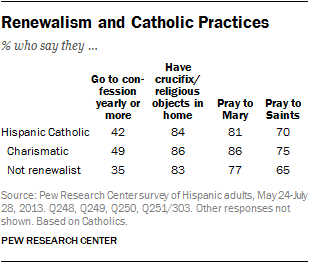 Charismatic Catholics also are more likely than other Catholics to say they go to confession with a priest at least a few times a year (49% vs. 35%), though about half or more in each group say they seldom or never go. 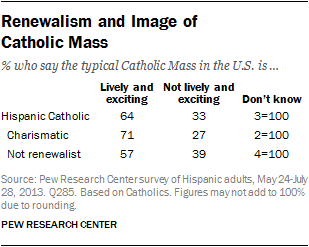 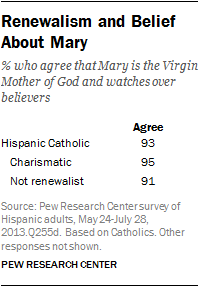 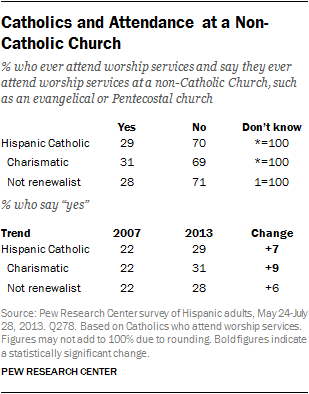 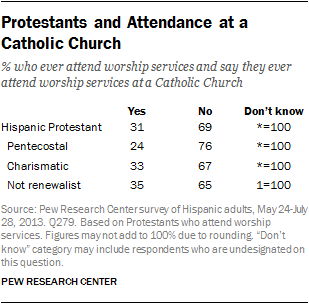 In 2007, this question was only asked of Catholics, so there is no comparison over time for Protestants.

The Demographics of Hispanic Renewalists

Hispanic renewalist Christians are more heavily foreign born than non-renewalists, and tend to have lower levels of educational attainment. There are few differences, however, between renewalists and others when it comes to gender and age. 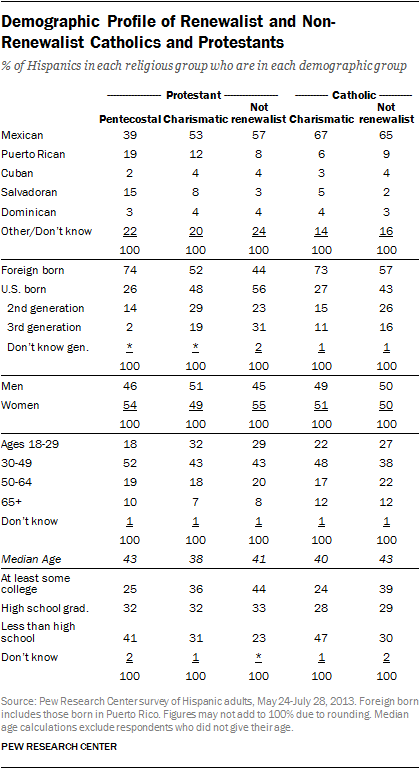 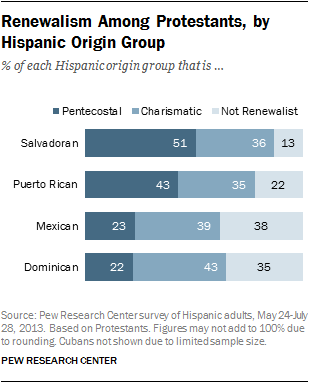 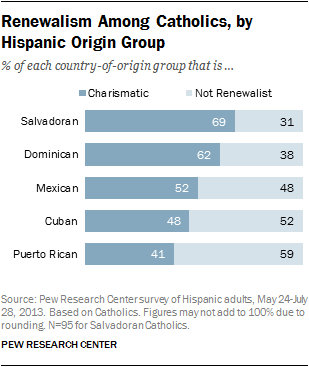 Next: Chapter 8: The Spirit World
← Prev Page
Page2Page3Page4Page5Page6Page7You are reading page8Page9Page10Page11Page12
Next Page →