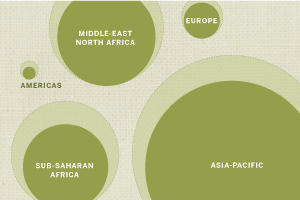 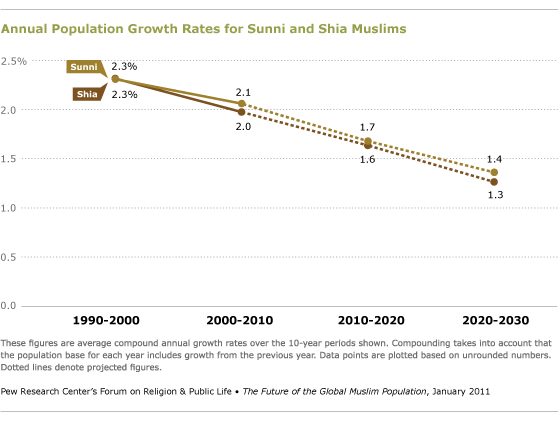 Within these ranges, however, there may be a very slight increase in the percentage of Sunni Muslims and a very slight decline in the percentage of Shia Muslims, largely because of low fertility in Iran, where more than a third of the world’s Shia Muslims live. The annual rates of growth for the world’s Sunni and Shia populations were identical from 1990 to 2000. But the rate of growth of the Shia population is expected to be slightly lower than the rate of growth for Sunnis over the next 20 years.

Four countries in the world have a Shia-majority population – Iran (where ~93% of Muslims are Shia), Azerbaijan (~70%), Bahrain (~70%) and Iraq (~67%). Of these, Iran has the largest number of Shia Muslims. Iraq’s Shia Muslim population is substantially smaller, but it is expected to grow at a faster rate than the Shia population in neighboring Iran.

The four countries with the largest Sunni-majority populations are Egypt (where ~99% of Muslims are Sunni), Indonesia (~99%), Bangladesh (~99%) and Pakistan (~87%). Of these, Pakistan is expected to have the greatest annual growth in its number of Sunni Muslims. Indonesia’s gains will be more modest.

57 For more information, see Methodology for Sunni-Shia estimates on page 38 of the Pew Forum’s 2009 report Mapping the Global Muslim Population. (return to text)