The world’s Muslim population is expected to increase by about 35% in the next 20 years, rising from 1.6 billion in 2010 to 2.2 billion by 2030, according to new population projections by the Pew Research Center’s Forum on Religion & Public Life. 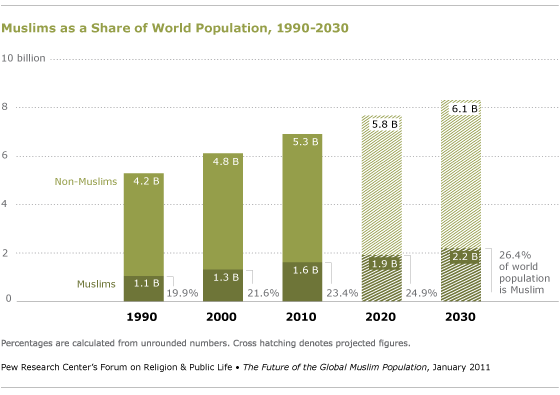 These are among the key findings of a comprehensive report on the size, distribution and growth of the global Muslim population. The report by the Pew Forum on Religion & Public Life seeks to provide up-to-date estimates of the number of Muslims around the world in 2010 and to project the growth of the Muslim population from 2010 to 2030. The projections are based both on past demographic trends and on assumptions about how these trends will play out in future years. Making these projections inevitably entails a host of uncertainties, including political ones. Changes in the political climate in the United States or European nations, for example, could dramatically affect the patterns of Muslim migration. 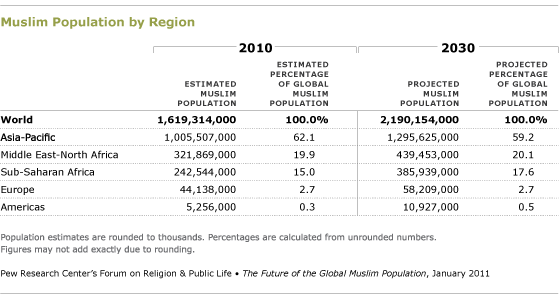 If current trends continue, however, 79 countries will have a million or more Muslim inhabitants in 2030, up from 72 countries today.1 A majority of the world’s Muslims (about 60%) will continue to live in the Asia-Pacific region, while about 20% will live in the Middle East and North Africa, as is the case today. But Pakistan is expected to surpass Indonesia as the country with the single largest Muslim population. The portion of the world’s Muslims living in sub-Saharan Africa is projected to rise; in 20 years, for example, more Muslims are likely to live in Nigeria than in Egypt. Muslims will remain relatively small minorities in Europe and the Americas, but they are expected to constitute a growing share of the total population in these regions.

In the United States, for example, the population projections show the number of Muslims more than doubling over the next two decades, rising from 2.6 million in 2010 to 6.2 million in 2030, in large part because of immigration and higher-than-average fertility among Muslims. The Muslim share of the U.S. population (adults and children) is projected to grow from 0.8% in 2010 to 1.7% in 2030, making Muslims roughly as numerous as Jews or Episcopalians are in the United States today. Although several European countries will have substantially higher percentages of Muslims, the United States is projected to have a larger number of Muslims by 2030 than any European countries other than Russia and France. (See the Americas section for more details.)

In Europe as a whole, the Muslim share of the population is expected to grow by nearly one-third over the next 20 years, rising from 6% of the region’s inhabitants in 2010 to 8% in 2030. In absolute numbers, Europe’s Muslim population is projected to grow from 44.1 million in 2010 to 58.2 million in 2030. The greatest increases – driven primarily by continued migration – are likely to occur in Western and Northern Europe, where Muslims will be approaching double-digit percentages of the population in several countries. In the United Kingdom, for example, Muslims are expected to comprise 8.2% of the population in 2030, up from an estimated 4.6% today. In Austria, Muslims are projected to reach 9.3% of the population in 2030, up from 5.7% today; in Sweden, 9.9% (up from 4.9% today); in Belgium, 10.2% (up from 6% today); and in France, 10.3% (up from 7.5% today). (See the Europe section.)

Several factors account for the faster projected growth among Muslims than non-Muslims worldwide. Generally, Muslim populations tend to have higher fertility rates (more children per woman) than non-Muslim populations. In addition, a larger share of the Muslim population is in, or soon will enter, the prime reproductive years (ages 15-29). Also, improved health and economic conditions in Muslim-majority countries have led to greater-than-average declines in infant and child mortality rates, and life expectancy is rising even faster in Muslim-majority countries than in other less-developed countries. (See the section on Main Factors Driving Population Growth for more details. For a list of Muslim-majority countries and definitions for the terms less- and more-developed, see the section on Muslim- Majority Countries.)

Growing, But at a Slower Rate 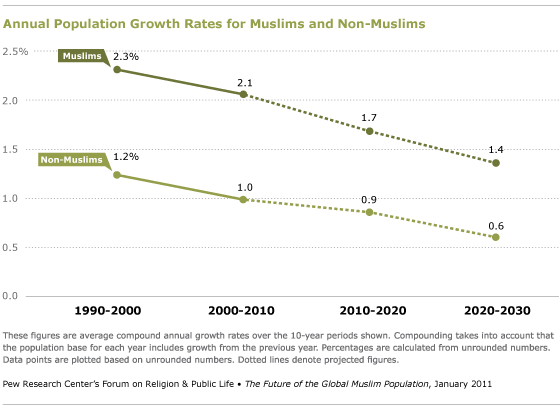 The declining growth rate is due primarily to falling fertility rates in many Muslim-majority countries, including such populous nations as Indonesia and Bangladesh. Fertility is dropping as more women in these countries obtain a secondary education, living standards rise and people move from rural areas to cities and towns. (See the Related Factors section for more details.) 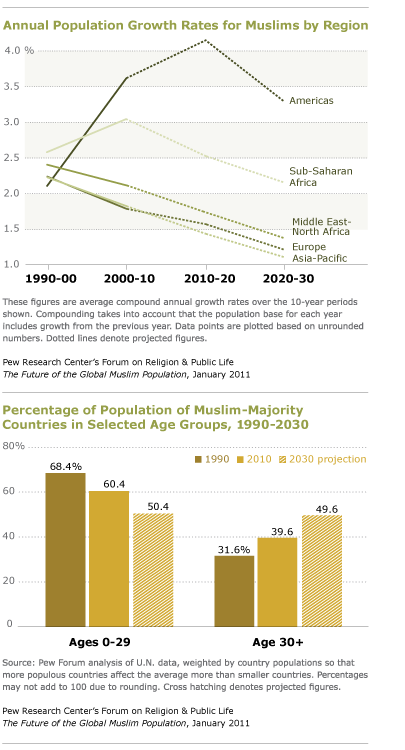 Falling birth rates eventually will lead to significant shifts in the age structure of Muslim populations. While the worldwide Muslim population today is relatively young, the so-called Muslim “youth bulge” – the high percentage of Muslims in their teens and 20s – peaked around the year 2000 and is now declining. (See the Age Structure section for more details.)

In 1990, more than two-thirds of the total population of Muslim-majority countries was under age 30. Today, people under 30 make up about 60% of the population of these countries, and by 2030 they are projected to fall to about 50%.

Muslim-majority countries, however, are not the only ones with aging populations. As birth rates drop and people live longer all around the globe, the population of the entire world is aging. As a result, the global Muslim population will remain comparatively youthful for decades to come. The median age in Muslim-majority countries, for example, rose from 19 in 1990 to 24 in 2010 and is expected to climb to 30 by 2030. But it will still be lower than the median age in North America, Europe and other more-developed regions, which rose from 34 to 40 between 1990 and 2010 and is projected to be 44 in 2030. By that year, nearly three-in-ten of the world’s youth and young adults – 29.1% of people ages 15-29 – are projected to be Muslims, up from 25.8% in 2010 and 20.0% in 1990.

Other key findings of the study include: 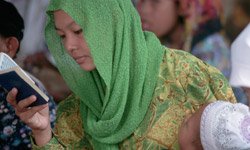 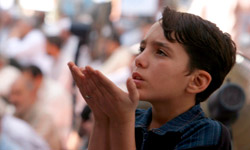 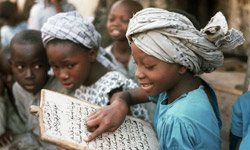 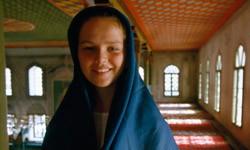 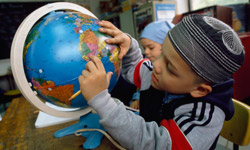 This report makes demographic projections. Projections are not the same as predictions. Rather, they are estimates built on current population data and assumptions about demographic trends; they are what will happen if the current data are accurate and the trends play out as expected. But many things – immigration laws, economic conditions, natural disasters, armed conflicts, scientific discoveries, social movements and political upheavals, to name just a few – can shift demographic trends in unforeseen ways, which is why this report adheres to a modest time frame, looking just 20 years down the road. Even so, there is no guarantee that Muslim populations will grow at precisely the rates anticipated in this report and not be affected by unforeseen events, such as political decisions on immigration quotas or national campaigns to encourage larger or smaller families.

The projections presented in this report are the medium figures in a range of three scenarios – high, medium and low – generated from models commonly used by demographers around the world to forecast changes in population size and composition. The models follow what is known as the cohort-component method, which starts with a baseline population (in this case, the current number of Muslims in each country) divided into groups, or cohorts, by age and sex. Each cohort is projected into the future by adding likely gains – new births and immigrants – and subtracting likely losses – deaths and emigrants. These calculations were made by the Pew Forum’s demographers, who collaborated with researchers at the International Institute for Applied Systems Analysis (IIASA) in Austria on the projections for the United States and European countries. (For more details, see Appendix A: Methodology.)

The current population data that underpin this report were culled from the best sources available on Muslims in each of the 232 countries and territories for which the U.N. Population Division provides general population estimates. Many of these baseline statistics were published in the Pew Forum’s 2009 report, Mapping the Global Muslim Population, which acquired and analyzed about 1,500 sources of data – including census reports, large-scale demographic studies and general population surveys – to estimate the number of Muslims in every country and territory. (For a list of sources, see Appendix B: Data Sources by Country.) All of those estimates have been updated for 2010, and some have been substantially revised. (To find the current estimate and projections for a particular region or country, see Muslim Population by Country, 1990-2030.) Since many countries are conducting national censuses in 2010-11, more data is likely to emerge over the next few years, but a cut-off must be made at some point; this report is based on information available as of mid-2010. To the extent possible, the report provides data for decennial years – 1990, 2000, 2010, 2020 and 2030. In some cases, however, the time periods vary because data is available only for certain years or in five-year increments (e.g., 2010-15 or 2030-35).

The definition of Muslim in this report is very broad. The goal is to count all groups and individuals who self-identify as Muslims. This includes Muslims who may be secular or nonobservant. No attempt is made in this report to measure how religious Muslims are or to forecast levels of religiosity (or secularism) in the decades ahead.2

The main factors, or inputs, in the population projections are:

Related factors – which are not direct inputs into the projections but which underlie vital assumptions about the way Muslim fertility rates are changing and Muslim populations are shifting – include:

To fully understand the projections, one must understand these factors, which the next section of the report will discuss in more detail.

Readers can also explore an online, interactive feature that allows them to select a region or one of the 232 countries and territories – as well as a decade from 1990-2030 – and see the size of the Muslim population in that place and time.

1 The seven countries projected to rise above 1 million Muslims by 2030 are: Belgium, Canada, Congo, Djibouti, Guinea Bissau,Netherlands and Togo. (return to text)

2 In other reports, the Pew Forum and the Pew Research Center have used large-scale public opinion surveys to measure the beliefs and practices of many religious groups, including Muslims in several countries. See, for example,Tolerance and Tension: Islam and Christianity in Sub-Saharan Africa, 2010, and Muslim Americans: Middle Class and Mostly Mainstream, 2007. (return to text)

Next: Preface
← Prev Page
You are reading page1Page2Page3Page4Page5Page6Page7Page8Page9Page10
Next Page →