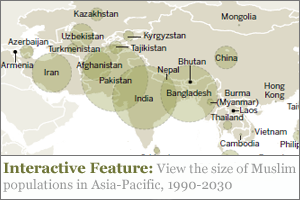 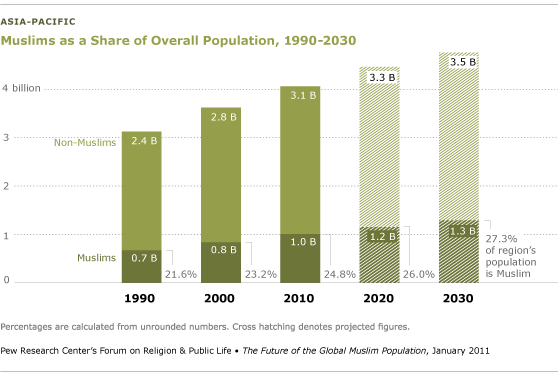 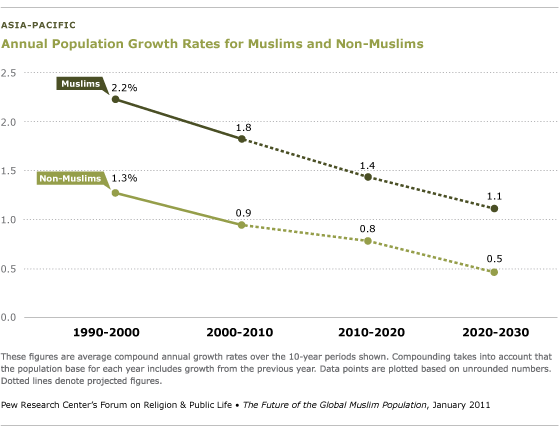 Sub-Regions and Countries in the Asia-Pacific Region 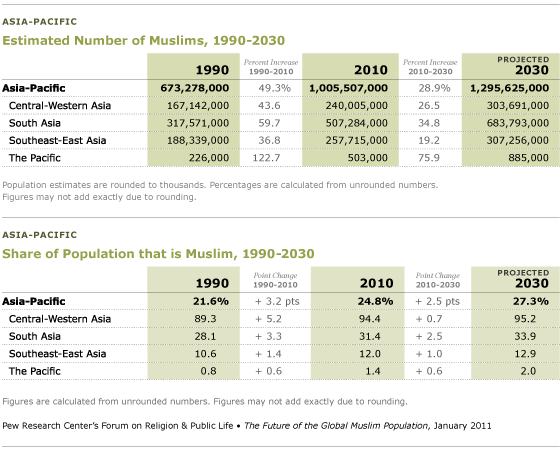 The Muslim population in Central-Western Asia is expected to grow by 63.7 million, from 240 million in 2010 to 303.7 million in 2030. While this sub-region has fewer Muslims than South Asia or Southeast-East Asia, Muslims make up a much larger share of the population. Indeed, more than nine-in-ten people living in Central-Western Asia are Muslim; this percentage is projected to increase slightly over the next 20 years, to 95.2% in 2030 compared with 94.4% in 2010.

Relatively few Muslims live in Australia, New Zealand and other countries in the Pacific sub-region. But the combined number of Muslims in these 24 countries is expected to increase by about 76% in the next 20 years, from 503,000 to 885,000.

Six of the 10 countries in the world that have the largest number of Muslims in 2010 are in the Asia-Pacific region: Indonesia, Pakistan, India, Bangladesh, Iran and Turkey. All six are expected to remain in the top 10 in 2030. 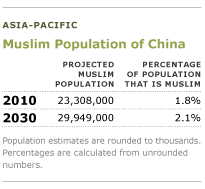 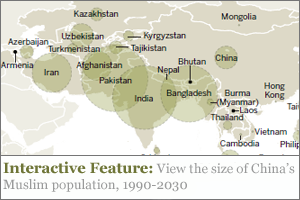 Muslims are not a new presence in China. Most of China’s Muslim communities, including the Hui, Uygurs and Kazakhs, have lived in China for more than 1,000 years. The largest concentrations of Muslims today are in the Western provinces of Xinjiang, Ningxia, Qinghai and Gansu. A substantial number of Muslims live in the cities of Beijing, Tianjin and Shanghai.

1 As discussed elsewhere in this report, Nigeria will become a Muslim-majority country by 2030. (return to text)

2 There is some debate about the total fertility rate for China as a whole. The United Nations estimates that the rate is 1.8 children per woman. Others, however, including the Pew Forum’s demographic consultants in China, put the figure between 1.4 and 1.5 children per woman. The Pew Forum’s consultants also estimated that Muslim women in China have an average of 0.3 more children than the general population. For more information, see “Fertility Estimates for the Provinces of China, 1975-2000,” National Bureau of Statistics of China and the East-West Center, July 2007, and Baochang Gu and Yong Cai, “Fertility Prospects in China,” United Nations Expert Group Meeting on Recent and Future Trends in Fertility, Population Division, United Nations Department of Social and Economic Affairs, Nov. 17, 2009. (return to text)

Indonesia’s projected drop from the No. 1 spot is due in part to its declining fertility rate, which is expected to be 2.0 in 2010-15. In Pakistan, by contrast, the fertility rate among Muslim women remains relatively high (an estimated average of 3.6 children per woman in 2010-15), which is one factor driving the expected surge in its Muslim population. 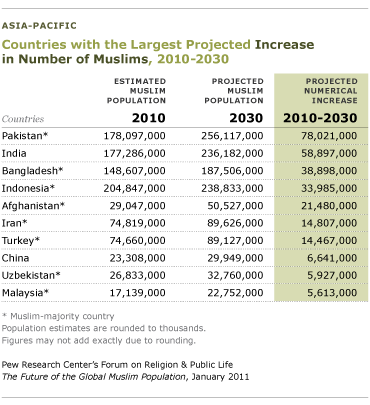 India is expected to have nearly as many Muslims as Indonesia by 2030. India’s Muslim population is projected to grow by nearly 60 million, from 177.3 million in 2010 to 236.2 million in 2030. This would be the second-largest projected increase in the number of Muslims in the Asia-Pacific region; Pakistan is the only country in the region expected to have a larger increase. (For more information on India, see sidebar.)

Afghanistan has a much smaller Muslim population than either Iran or Turkey, but the number of Muslims in Afghanistan is expected to increase by almost 74% in the next 20 years, from 29 million in 2010 to 50.5 million in 2030. 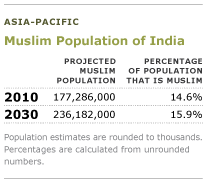 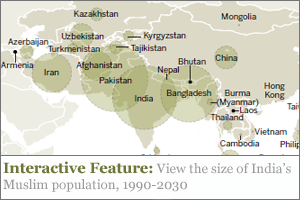 Fertility rates for all populations in India have been declining in recent years, in part because of increasing use of birth control. However, Muslims in India continue to have more children on average than non-Muslims, mainly because Muslims’ use of birth control still falls below the national average. In 2005-2006, for example, 45.7% of Muslim couples used some form of birth control, compared with 56.3% of couples in the general population, according to an analysis of the National Family Health Survey.

Muslims in India are poorer and less educated than other religious groups. These characteristics are often associated with higher fertility rates. For instance, according to the 2001 census, only 3.6% of Muslims in India age 20 and older are college or university graduates, compared with 6.7% of all Indians in this age group. The literacy rate among Muslim women (50.1%) is lower than the rate among other women in India, including Hindus (53.2%) and Christians (76.2%). 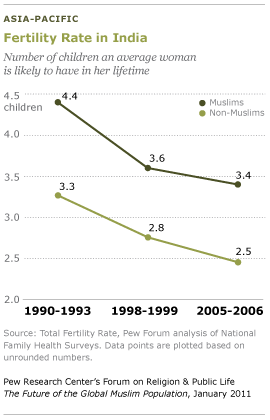 Muslim women also are less likely to work outside the home than non-Muslim women, and employment is associated with lower fertility.

Muslims have lived in India since the advent of Islam. The country’s first mosque is said to have been established around 630 A.D., even before the death of the Prophet Muhammad. 2 The number of Muslims in India declined in 1947 when India gained its independence and an estimated 7 million people migrated from India to Pakistan, but India’s Muslim population has been rising steadily since.

Muslims live throughout India. According to the 2001 census, a large concentration of Muslims lives in two of the largest and poorest states, Uttar Pradesh and Bihar; 35.6% of all the Muslims in India live in these two states. An additional 14.6% of the country’s Muslims live in West Bengal, which adjoins Bihar and borders Bangladesh. The remainder of the country’s Muslim population is scattered in more than 20 other states.

1 In the Pew Forum’s 2009 report Mapping the Global Muslim Population, India’s population figures were calculated assuming the percentage of Muslims was the same in 2009 as it was in 2001, when the national census was taken. However, the new estimate for 2010 takes into account differential fertility rates between Muslims and non-Muslims in India and arrives at a higher estimate than in the previous report. (return to text)

Fertility rates have fallen in most of the Muslim-majority countries in the Asia-Pacific region in recent decades. Yet they remain, on average, somewhat higher than in other less-developed countries in the region and considerably higher than in more-developed Asia-Pacific countries. This is one of the main reasons that the Muslim population is projected to rise both in absolute numbers and as a share of the region’s population. 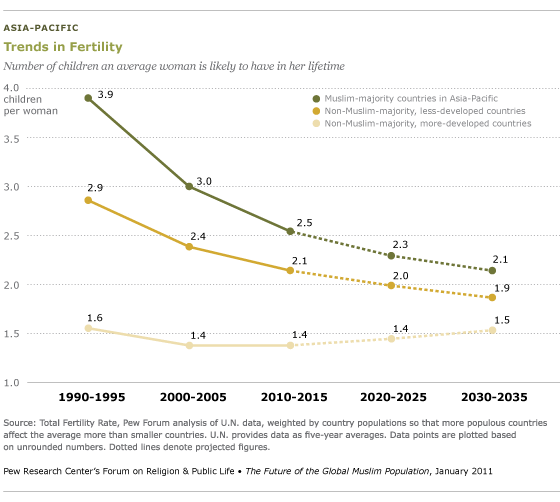 The Asia-Pacific countries classified as more-developed – including Japan, Australia and New Zealand – already have fertility rates significantly below the replacement level of 2.1 children per woman, the minimum necessary to keep the population stable (absent other factors, such as immigration).25 In the Asia-Pacific countries with Muslim majorities – including Indonesia, Iran, Turkey and Malaysia – the average Total Fertility Rate (the total number of children an average woman would have in her lifetime if fertility patterns did not change) has dropped substantially, as shown in the graph on page 79. By 2030, it is projected to reach 2.1 children per woman, which is at or below replacement levels in those countries. However, the rate for Muslim-majority countries in the region is still expected to be somewhat higher than the rate for other developing countries in the region (1.9 children per woman in 2030-35). 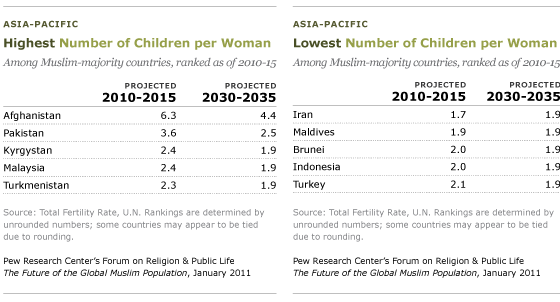 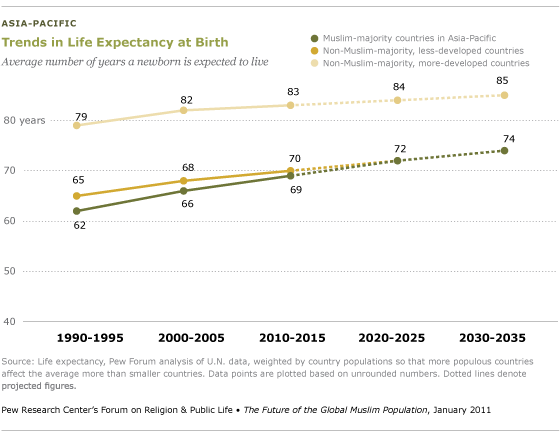 Brunei has the highest life expectancy at birth (78) among Muslim-majority countries in the region today, and Afghanistan has the lowest (45). Life expectancy in Afghanistan is projected to rise to 53 by 2030-35. 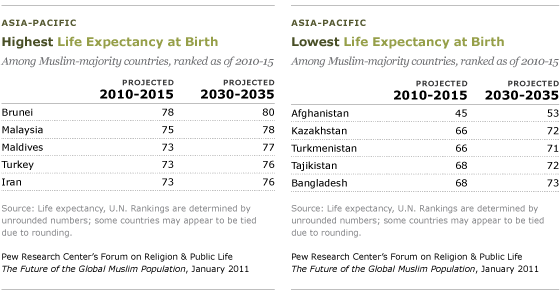 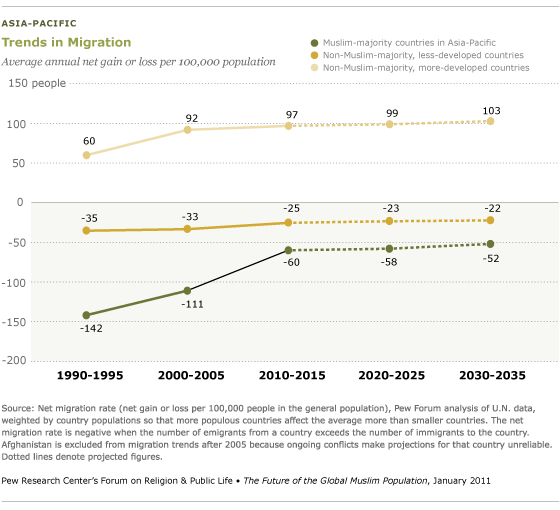 Of course, not all people who move from Muslim-majority countries are Muslims. Studies have shown that religious minorities sometimes migrate in larger proportions than religious majorities. (See migration section on page 38.) This is the case for several Muslim-majority countries in Central and Western Asia, including Kazakhstan, Kyrgyzstan, Uzbekistan and Azerbaijan. While some of the people leaving these countries are Muslims moving to other parts of the former Soviet Union, a significant number are ethnic Russians, Germans, Armenians and Jews. 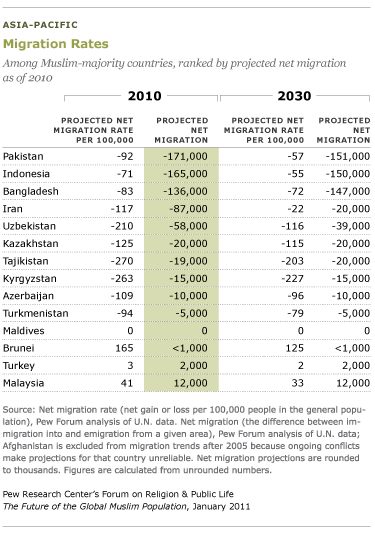 A few Muslim-majority countries in the Asia-Pacific region, including Turkey, are experiencing a net inflow of migrants. Previously, Turkey lost more people than it gained, but as the economic situation in the country has improved, population losses have been balanced by population gains, including Turks returning from abroad.

A larger percentage of the population in Muslim-majority countries in Asia-Pacific are now in or soon will enter their prime childbearing years (ages 15-29), which is yet another reason for the continued growth of the region’s Muslim population. People ages 15-29 make up 28.5% of the total population in the region’s Muslim-majority countries, compared with 25.7% in other less-developed countries and 16.0% in more-developed countries.

At the same time, as fertility rates drop – meaning that fewer children are born per woman – and life expectancies rise, the Muslim population in the Asia-Pacific region is aging. This is reflected in the median age in Muslim-majority countries in the region, which has climbed from 20 to 25 in the past two decades and is expected to reach 32 years in 2030. 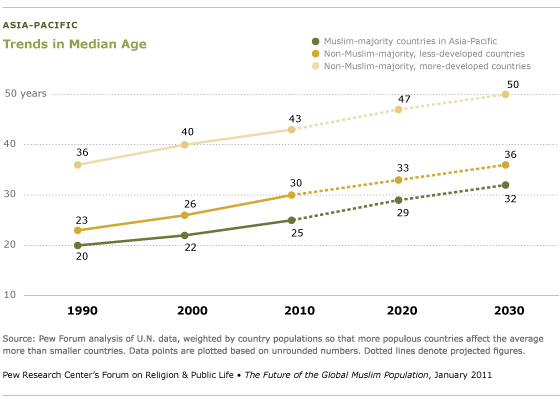 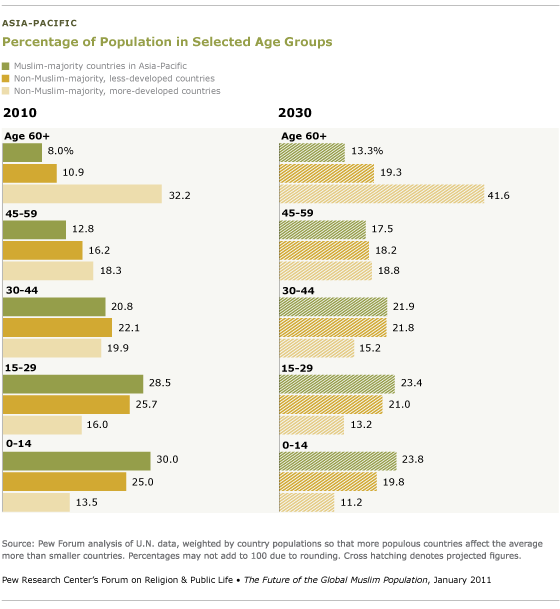 24 Preliminary results from Indonesia’s recent census indicate that the country’s 2010 total population could be as high as 237.6 million, 5 million higher than the U.N.’s 2010 estimate of 232.5 million. If the higher 2010 population estimate were projected forward to 2030 using the methodologies employed in this report, Indonesia’s Muslim population would be 244 million, which still is smaller than Pakistan’s projected Muslim population in 2030 (256.1 million). (return to text)

26 As noted earlier in the report, life expectancy at birth is the average number of years a newborn would be expected to live if health and living conditions at the time of his/her birth remained the same throughout his/her life. (return to text)