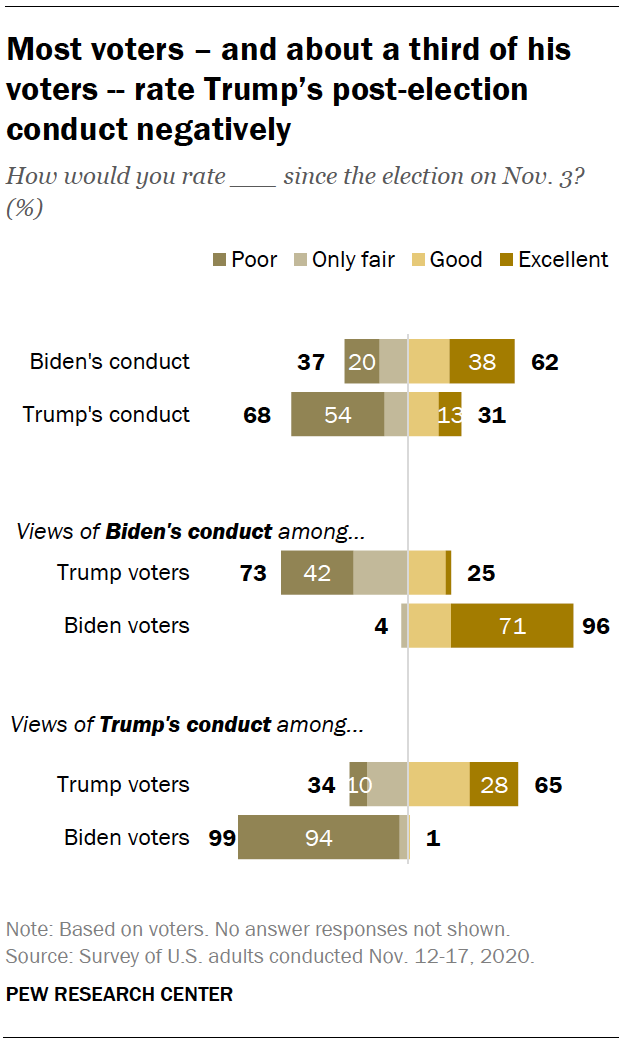 As states continue to certify vote results from the 2020 election in the coming weeks, Trump receives highly negative ratings for his conduct since the Nov. 3 election. Nearly seven-in-ten voters (68%) say Trump’s conduct has been only fair or poor, including a majority of voters who say it has been poor (54%).

In contrast, Biden gets positive marks for his conduct since the 2020 presidential election. Overall, 62% of voters say it has been good or excellent, while 37% say it has been only fair or poor. Nearly three times as many voters say Biden’s conduct has been excellent as say this about Trump’s (38% vs. 13%, respectively).

The overwhelming majority of Biden voters (96%) rate Biden’s post-election conduct as excellent or good, as do a quarter of Trump voters.

Biden’s supporters are remarkably united in their views of Trump’s post-election conduct and whether his presidential campaign should continue legal challenges to the vote and ballot counting process. Virtually all Biden voters (99%) say Trump’s conduct since the election has been fair or poor, with 94% rating it as poor. 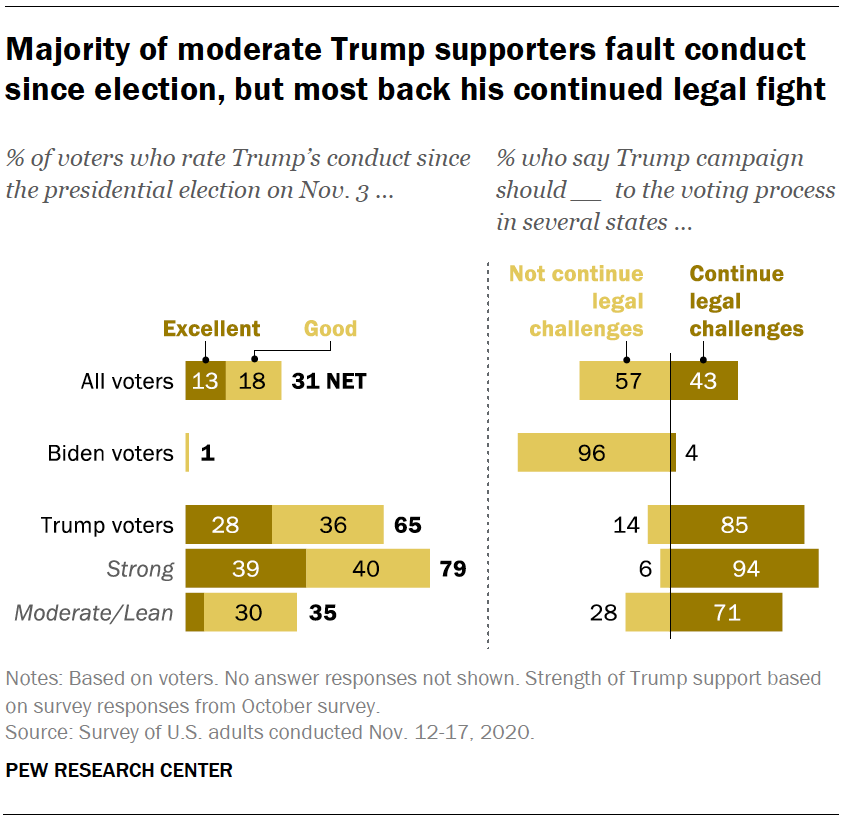 Similarly, 96% of Biden voters say the Trump campaign’s legal challenges to the vote counting process should not continue.

Nearly two-thirds of Trump voters (65%) view his post-election conduct positively, while 34% say it has been only fair or poor.

Trump’s ratings are much more positive among those who said they supported him strongly in Pew Research Center’s October survey. At that time, a 68% majority of registered voters backed him strongly, while 32% supported him moderately or leaned toward voting for him.

However, sizable majorities of Trump voters – those who supported him strongly and not as strongly – say his campaign’s legal challenges should continue. An overwhelming share of strong Trump supporters (94%) say this, as do a smaller majority of voters (71%) who backed Trump less strongly.

Among Trump voters, opposition to Trump’s continued legal challenges is largely limited to those who rate his post-election conduct as poor. Among the 10% of Trump voters who express this view, 62% say his campaign’s election challenges should not continue. But only about a quarter (24%) of Trump supporters who rate his conduct as only fair agree, as do very small shares of those who view his post-election conduct as good (5%) or excellent (1%). 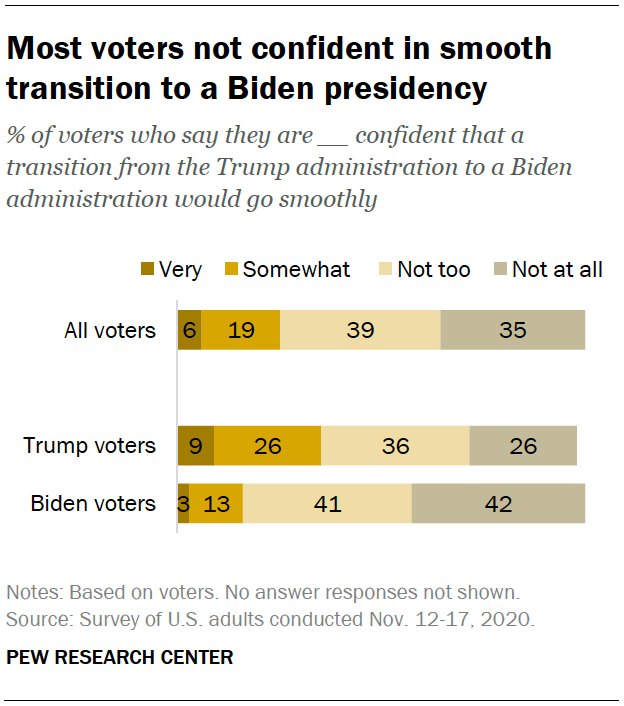 With the transition from a Trump presidency to a Biden administration stalled because of the president’s continuing legal challenges, voters are widely pessimistic that a transition would go smoothly.

Nearly three-quarters of voters (73%) say they are not too or not at all confident that the transition from the Trump administration to the Biden administration will go smoothly. This includes a majority of both Biden and Trump voters.

Trump voters are slightly more confident than Biden voters that the transition will go smoothly (35% vs. 16%, respectively). Still, majorities of each group lack confidence in a smooth presidential transition (62% of Trump voters vs. 83% of Biden voters).

Warm ratings toward Biden rise following his election as president

When asked to rate Biden on a “feeling thermometer” between 0 and 100 – where 0 is the coldest, most negative rating and 100 represents the warmest, most positive – voters give Biden an average score of 48, up from 45 in October.

Overall, each of the four major 2020 candidates received a minor uptick in their average thermometer scores since October. Today, Biden’s average thermometer rating (48) is the highest of all four political leaders asked about on the survey: Trump’s overall average was 41, while ratings for Kamala Harris and Mike Pence were 45 and 44, respectively.

Biden voters also view Harris more warmly than they did in October. Then, her average thermometer rating was 71. Today, her average is 78.

At the same time, Trump’s and Pence’s mean ratings among Trump voters are little changed from October (Trump’s average score was 82 then and 80 now; Pence’s were 78 in October and 79 today).

Next: 2. Voters’ evaluations of the 2020 election process
← Prev Page
Page1You are reading page2Page3Page4Page5Page6Page7Page8Page9
Next Page →

Sharp Divisions on Vote Counts, as Biden Gets High Marks for His Post-Election Conduct
1. Biden, Trump and the post-election period
Few are confident presidential transition would go smoothlyWarm ratings toward Biden rise following his election as president
2. Voters’ evaluations of the 2020 election process 3. The voting experience in 2020 4. Voters’ reflections on the campaign 5. Key post-election issues: The pandemic and the economy Acknowledgments Appendix: Categorization of states based on COVID restrictions Methodology

Large Shares of Voters Plan To Vote a Straight Party Ticket for President, Senate and House

U.S. Public Now Divided Over Whether To Get COVID-19 Vaccine