Data in this report is drawn from the panel wave conducted Nov. 12 to Nov. 17, 2020. A total of 11,818 panelists responded out of 13,568 who were sampled, for a response rate of 87%. This does not include two panelists who were removed from the data due to extremely high rates of refusal or straightlining. The cumulative response rate accounting for nonresponse to the recruitment surveys and attrition is 5%. The break-off rate among panelists who logged on to the survey and completed at least one item is 1%. The margin of sampling error for the full sample of 11,818 respondents is plus or minus 1.6 percentage points. 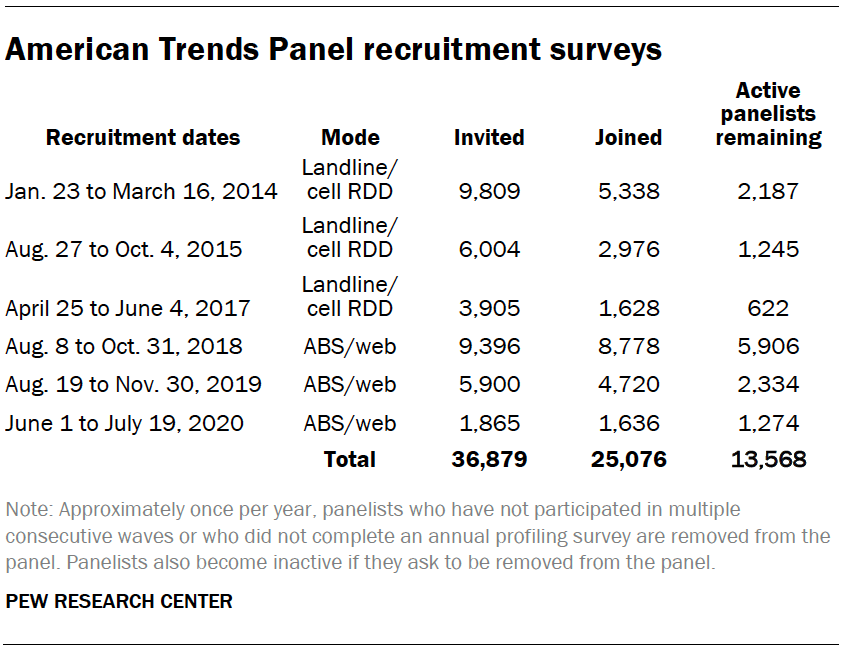 On Nov. 12 and Nov. 13, invitations were sent out in two separate launches: Soft Launch and Full Launch. Sixty panelists were included in the soft launch, which began with an initial invitation sent on November 12, 2020. The ATP panelists chosen for the initial soft launch were known responders who had completed previous ATP surveys within one day of receiving their invitation. All remaining English- and Spanish-speaking panelists were included in the full launch and were sent an invitation on November 13, 2020.

All panelists with an email address received an email invitation and up to two email reminders if they did not respond to the survey. All ATP panelists that consented to SMS messages received an SMS invitation and up to one SMS reminder. Interactive voice recording (IVR) reminder calls were made on November 14, 2020 to 179 tablet households that previously provided consent to receive these reminders. 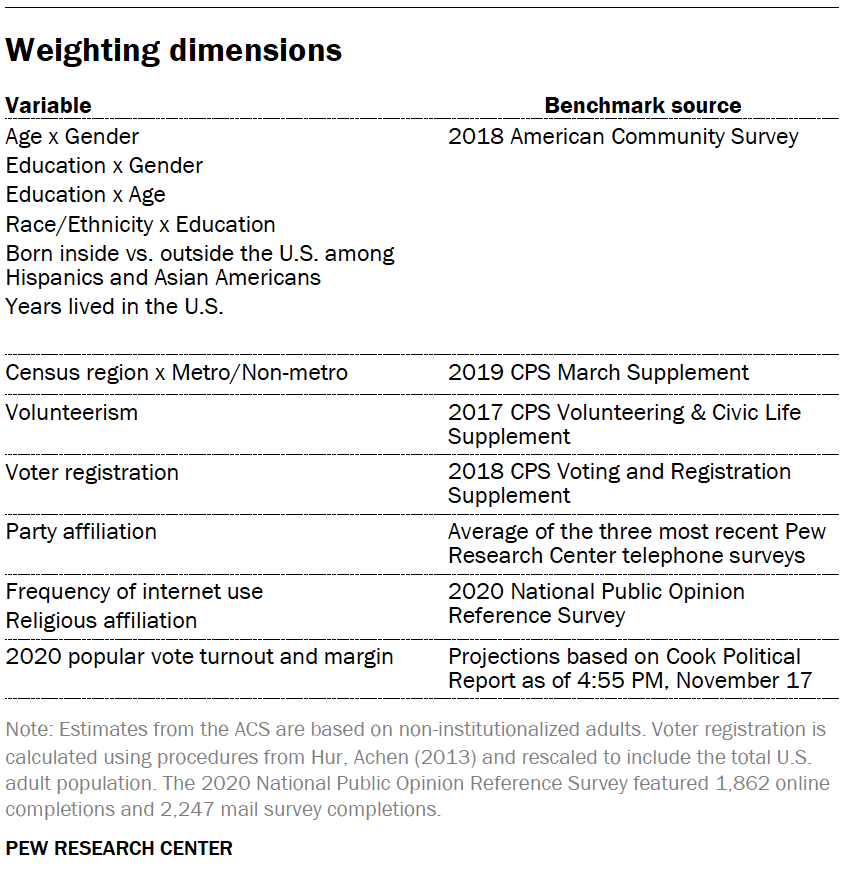 The wave-specific base weights for panelists who completed the survey are again calibrated to match the population benchmarks specified above. These weights are trimmed (typically at about the 1st and 99th percentiles) to reduce the loss in precision stemming from variance in the weights. Sampling errors and test of statistical significance take into account the effect of weighting.

A final adjustment was applied to the trimmed weights to ensure that turnout and the popular vote margin exactly matched the weighting benchmark. 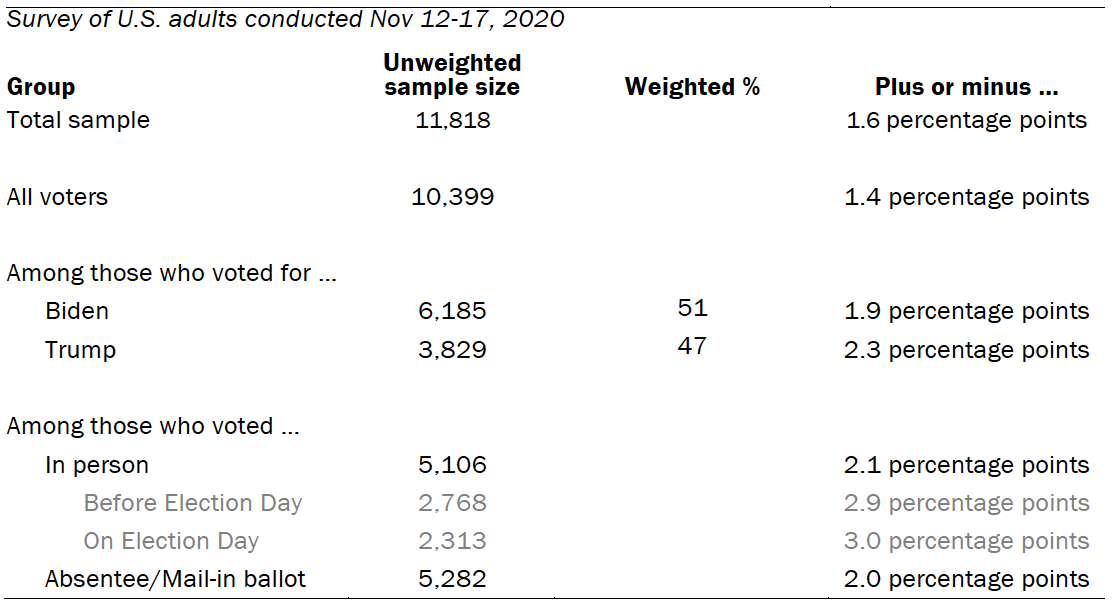 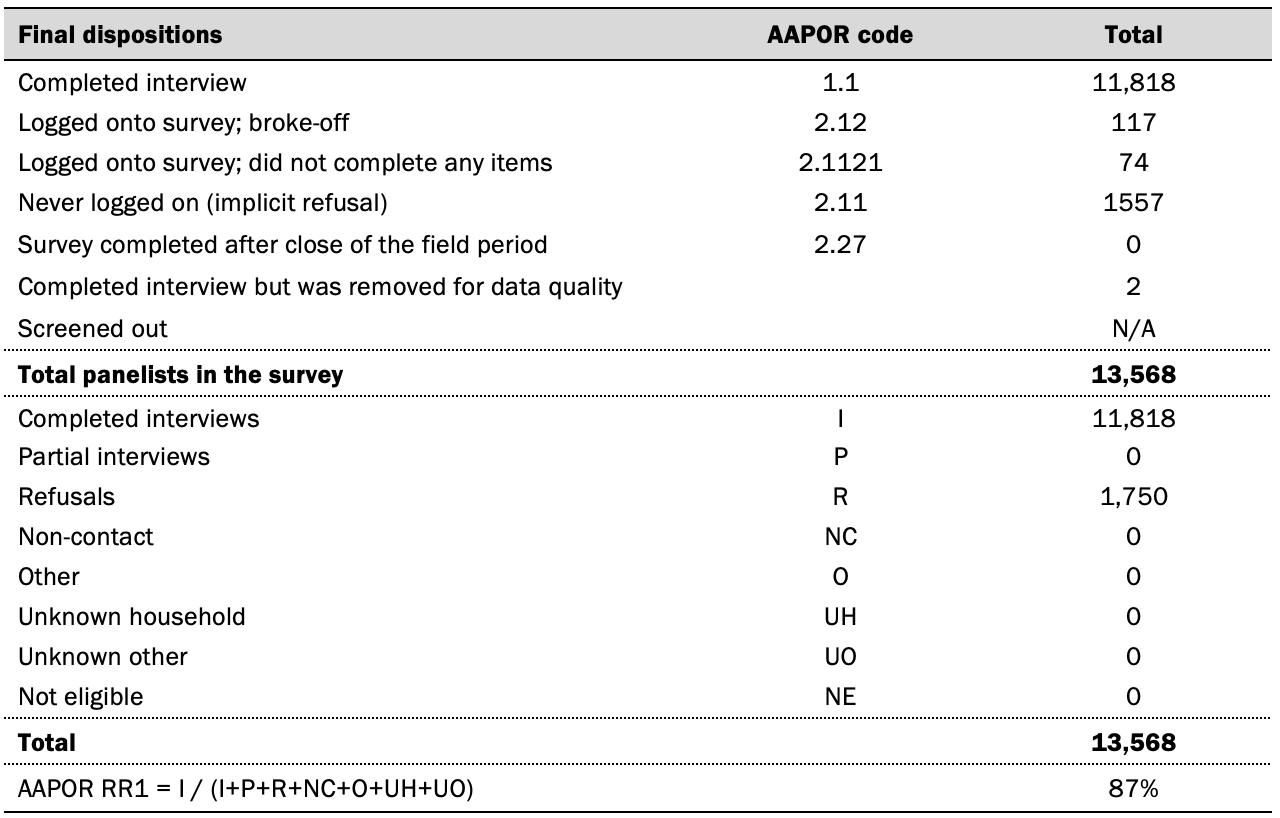 Sharp Divisions on Vote Counts, as Biden Gets High Marks for His Post-Election Conduct 1. Biden, Trump and the post-election period 2. Voters’ evaluations of the 2020 election process 3. The voting experience in 2020 4. Voters’ reflections on the campaign 5. Key post-election issues: The pandemic and the economy Acknowledgments Appendix: Categorization of states based on COVID restrictions
Methodology
The American Trends Panel survey methodology