This analysis focuses on views of religious faith and family relationships around the world during the COVID-19 pandemic. It builds on research released in the fall of 2020 about responses in 14 countries to the coronavirus outbreak and U.S. public perceptions of how the pandemic has affected religious beliefs and family situations.

Face-to-face interviews were not possible in many parts of the world due to the coronavirus outbreak, so the study includes only countries where nationally representative telephone surveys were feasible.

The pandemic situation has changed substantially since the survey was conducted. In many European countries, for example, the number of coronavirus cases and deaths was relatively low during the survey period but subsequently spiked in the fall and winter. On the other hand, cases began to rise during the fielding period in Australia, Japan and the U.S.; more recent surges in Japan and the U.S. have since eclipsed those summer outbreaks. 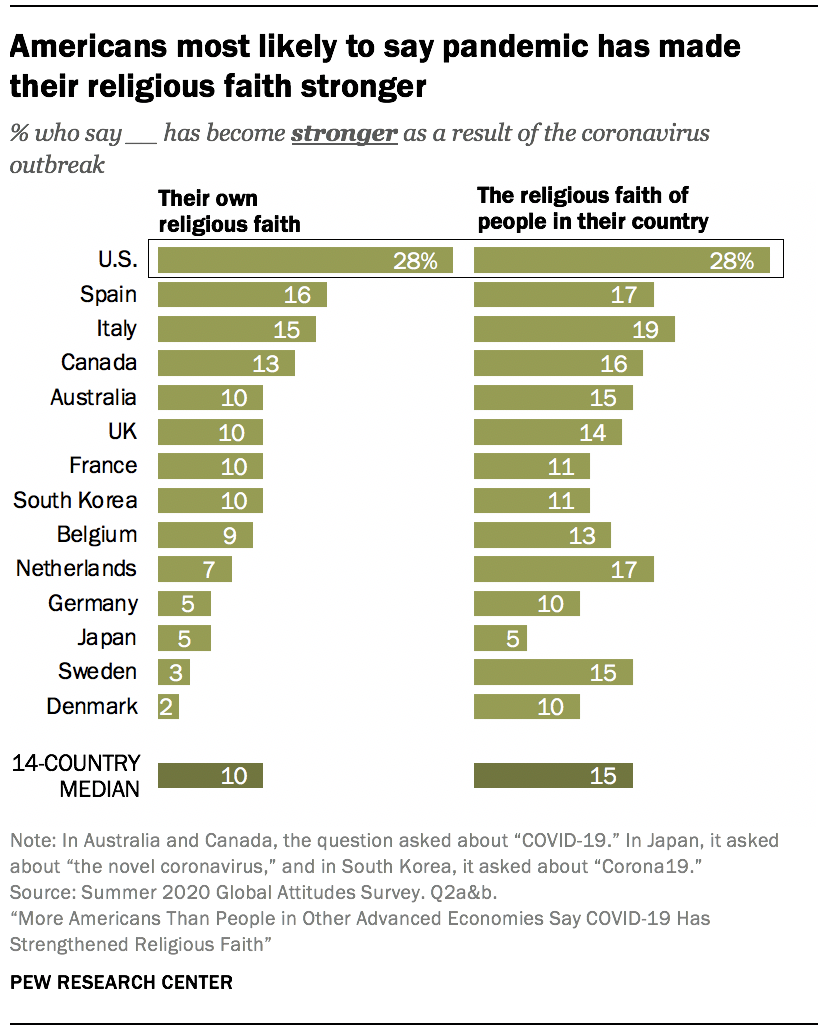 As the coronavirus pandemic continues to cause deaths and disrupt billions of lives globally, people may turn to religious groups, family, friends, co-workers or other social networks for support. A Pew Research Center survey conducted in the summer of 2020 reveals that more Americans than people in other economically developed countries say the outbreak has bolstered their religious faith and the faith of their compatriots.

Nearly three-in-ten Americans (28%) report stronger personal faith because of the pandemic, and the same share think the religious faith of Americans overall has strengthened, according to the survey of 14 economically developed countries.

Far smaller shares in other parts of the world say religious faith has been affected by the coronavirus. For example, just 10% of British adults report that their own faith is stronger as a result of the pandemic, and 14% think the faith of Britons overall has increased due to COVID-19. In Japan, 5% of people say religion now plays a stronger role in both their own lives and the lives of their fellow citizens.

Majorities or pluralities in all the countries surveyed do not feel that religious faith has been strengthened by the pandemic, including 68% of U.S. adults who say their own faith has not changed much and 47% who say the faith of their compatriots is about the same.

Some previous studies have found an uptick in religious observance after people experience a calamity. And a Pew Research Center report published in October 2020 showed that roughly a third (35%) of Americans say the pandemic carries one or more lessons from God.

When it comes to questions about strength of religious belief, the wide variation in responses across countries may reflect differences in the way people in different countries view the role of religion in their private and public lives.

European countries experienced rapid secularization starting in the 19th century, and today, comparatively few people in Italy (25%), the Netherlands (17%) or Sweden (9%) say that religion is very important in their lives.1 East Asian countries such as Japan and South Korea have low rates of religious affiliation and observance – at least by Western-centric measures.

The state of the pandemic during the summer 2020 survey period

Pew Research Center’s survey was conducted June 10 to Aug. 3, 2020, when all of the countries surveyed were under social distancing and/or national lockdown orders due to COVID-19. Even though the coronavirus is a global pandemic, not all countries have experienced the disease in the same way. During the fielding period, Australia, Japan and the United States had rising numbers of infections, while Italy and some other European countries had started to recover from the large number of cases reported in April and May. Nearly all countries surveyed experienced significant spikes in infections and deaths in the fall and winter.

The worsening of the pandemic, including tightening restrictions after the survey was conducted, may have affected views of faith and family since the summer of 2020. Attitudes also may continue to shift as the pandemic evolves. Nevertheless, if the differences between the U.S. and other economically developed countries on religion-related questions have deeper roots, they may persist even as the pandemic wears on, and the same may be true of differences between demographic groups within countries.

The United States recently has experienced some trends toward secularization, including a growing share of the population that does not identify with any religion and a shrinking share of people who say they regularly attend a church or other house of worship. Still, religion continues to play a stronger role in American life than in many other economically developed countries. For example, nearly half of Americans (49%) say religion is very important in their lives, compared with 20% in Australia, 17% in South Korea and just 9% in Japan.

In nearly every country surveyed, those who say religion is very important in their lives are more likely to say both their own faith and that of their compatriots has grown due to the pandemic. Americans’ greater proclivity to turn to religion amid the pandemic is largely driven by the relatively high share of religious Americans (In several countries, those who say religion is somewhat, not too or not at all important to them personally are less likely take a clear position either way on how their faith has been affected by the pandemic.)

Religion is just one of many aspects of life that have been touched by the pandemic. Family relationships, too, have been affected by lockdowns, economic turmoil and the consequences of falling ill. Many in countries that were hit hard by initial waves of infections and deaths in the spring say their family relationships have strengthened. That is the case in Spain (42%), Italy, the UK and the U.S. (41% each). In the U.S. and in several other countries, younger adults are especially likely to say they feel a stronger bond with immediate family members since the start of the pandemic.

Among the countries surveyed, the U.S. has by far the highest share of respondents who say their faith has strengthened, with about three-in-ten holding this view.

By contrast, in Spain and Italy, two of Western Europe’s more religious countries, roughly one-in-six people say their own religious faith has grown due to the pandemic.

In Canada, 13% say their religious faith has become stronger because of COVID-19. And in other countries surveyed, one-in-ten or fewer report deeper faith due to the coronavirus outbreak. 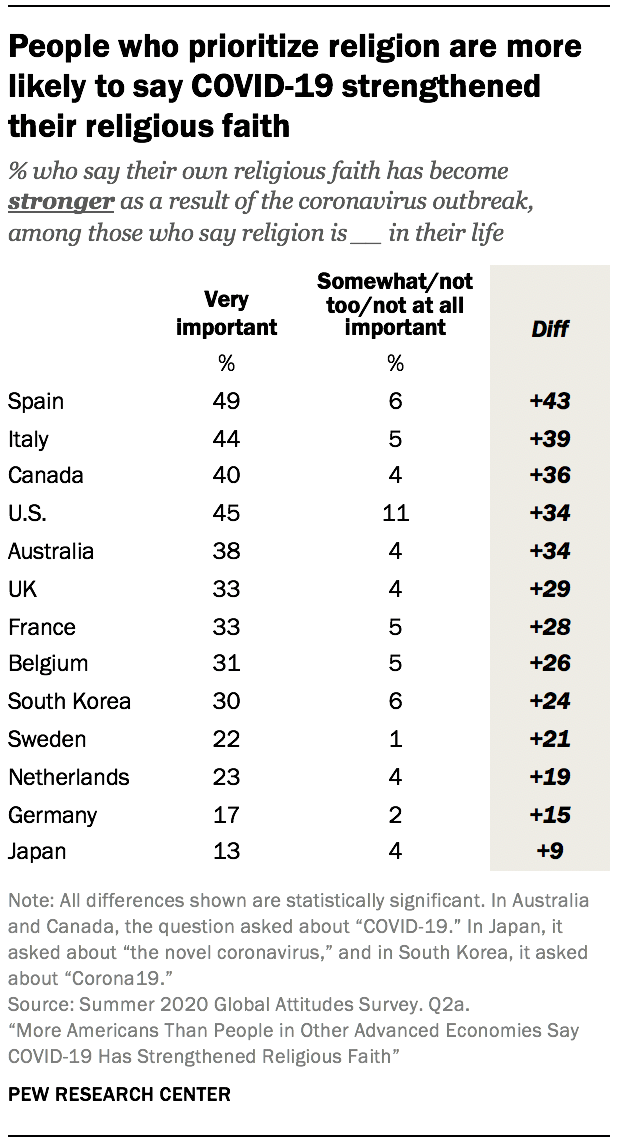 The pandemic has led to the cancellation of religious activities and in-person services around the world, but few people say their religious faith has weakened as a result of the outbreak. Across the countries surveyed, a median of just 3% say their own religious faith has decreased, including 4% in the U.S. In South Korea, 9% say their personal faith has become weaker as a result of the coronavirus outbreak, making it the country where people are most likely to hold this view.

Perceptions about the pandemic’s influence on faith are tied to people’s own levels of observance – those who are more religious are more likely than their less religious compatriots to say COVID-19 has strengthened their faith and that of others in their country.

Wealth and education also play a role: In some countries, people with lower incomes and less education are somewhat more likely than others to say the pandemic has bolstered their religious faith. 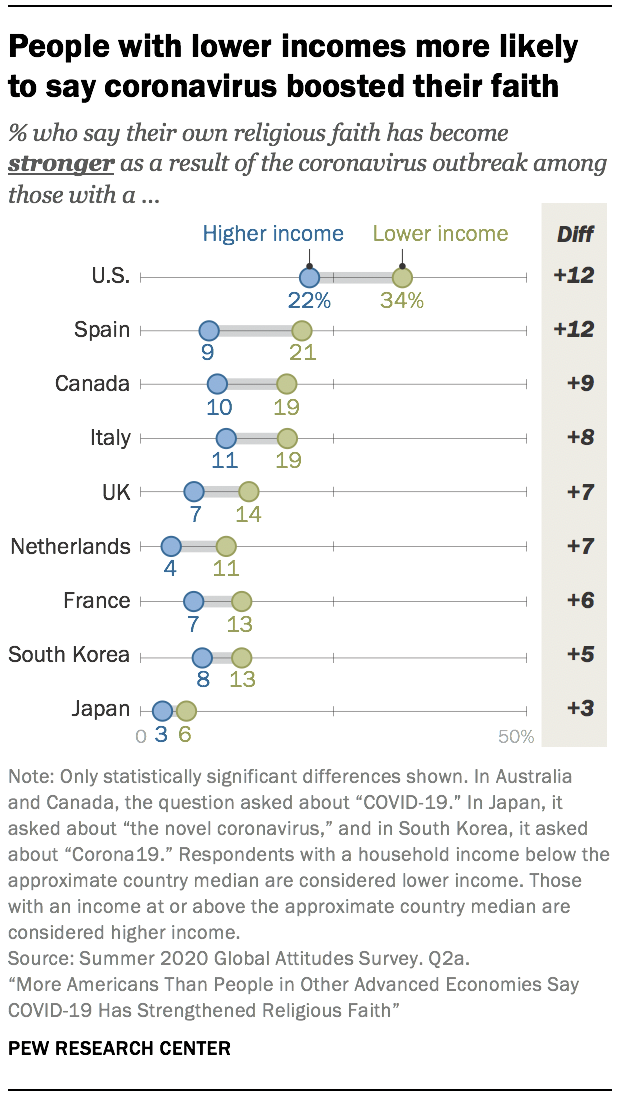 When it comes to income, the largest gaps appear in the U.S. and Spain, where people at or below the national median income are 12 percentage points more likely than the rest of the population to say their religious faith has become stronger. There are also significant differences by income group in Canada, Italy, the UK, the Netherlands, France, South Korea and Japan.

There are few differences on this question by gender, even though women are generally more religious than men, particularly in Christian-majority countries. Two exceptional cases in this survey are Italy and South Korea, where women are more likely than men to report that their faith has been bolstered by the pandemic.

The survey also asked people if the strength of religious faith in their country as a whole has changed due to the pandemic. Responses largely mirror how people answer the question about their own religious faith, although respondents may additionally be taking into account their views on the role of religion in their nation’s public life.

Among Americans, about half of adults surveyed (47%) say the religious faith of people in the U.S. has not changed much, while 28% say the country has become more religious. A relative handful of Americans (14%) think that religious faith in their country has weakened as a result of the coronavirus outbreak.

In the U.S., White evangelicals most likely to say COVID-19 boosted faith 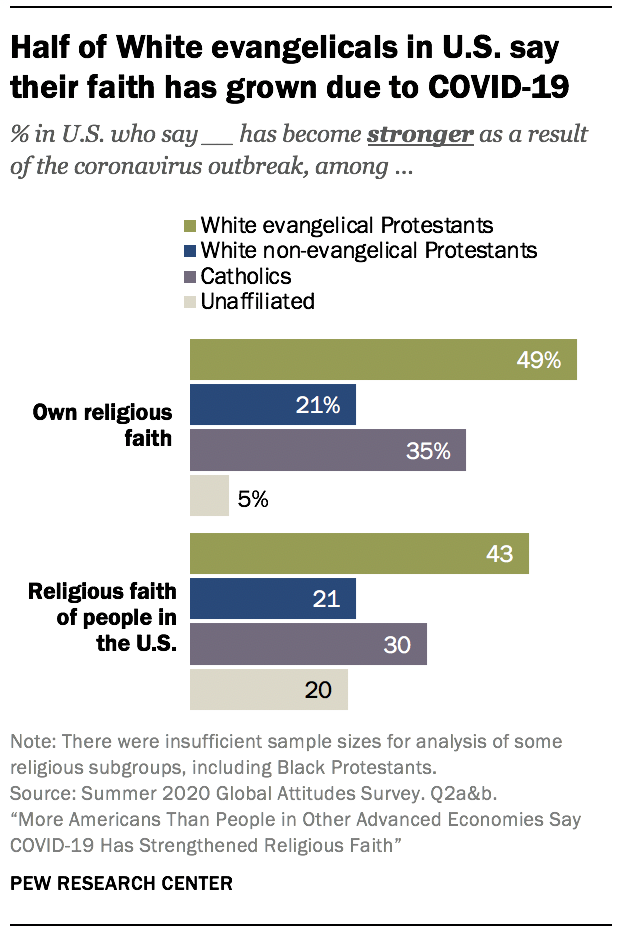 White evangelical Protestants in the U.S. – one of the most religious groups in the country, by a variety of standard measures – are among the most likely to see stronger faith due to the coronavirus outbreak. Nearly half (49%) say their own religious faith has grown, while 43% say the same about the faith of Americans as a whole.

Family bonds have strengthened for many in countries surveyed 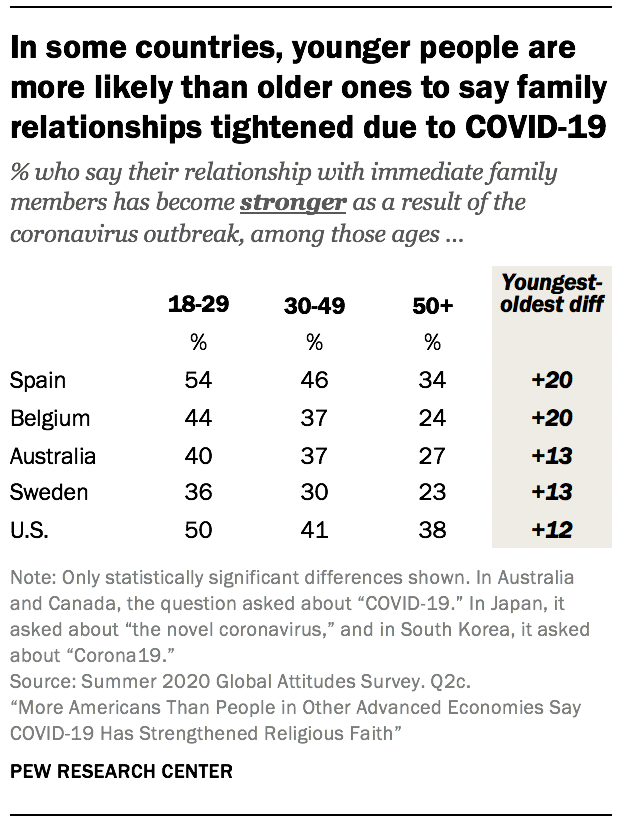 About four-in-ten adults surveyed in Spain, Italy, the U.S. and the UK say their relationship with immediate family has strengthened. By contrast, only about two-in-ten in Germany, Japan and South Korea say they now have deeper relationships with their family.

Record numbers of younger adults in the U.S. have moved home since the start of the pandemic, and young Americans are more likely than their older counterparts to say their relationships with immediate family members have strengthened. Half of U.S. adults ages 18 to 29 say their family bonds have tightened, compared with 38% of those ages 50 and older. Similar age gaps appear in Spain and Belgium (both 20 points), as well as Australia and Sweden (13 points).