Pew Research Center conducted this study to understand how Americans view the 2020 presidential election and the voting process. For this analysis, we surveyed 11,818 U.S. adults in November 2020, including 10,399 U.S. citizens who reported having voted in the November election.

Everyone who took part in this survey is a member of Pew Research Center’s American Trends Panel (ATP), an online survey panel that is recruited through national, random sampling of residential addresses. This way nearly all U.S. adults have a chance of selection. The survey is weighted to be representative of the U.S. adult population by gender, race, ethnicity, partisan affiliation, education and other categories. Read more about the ATP’s methodology. 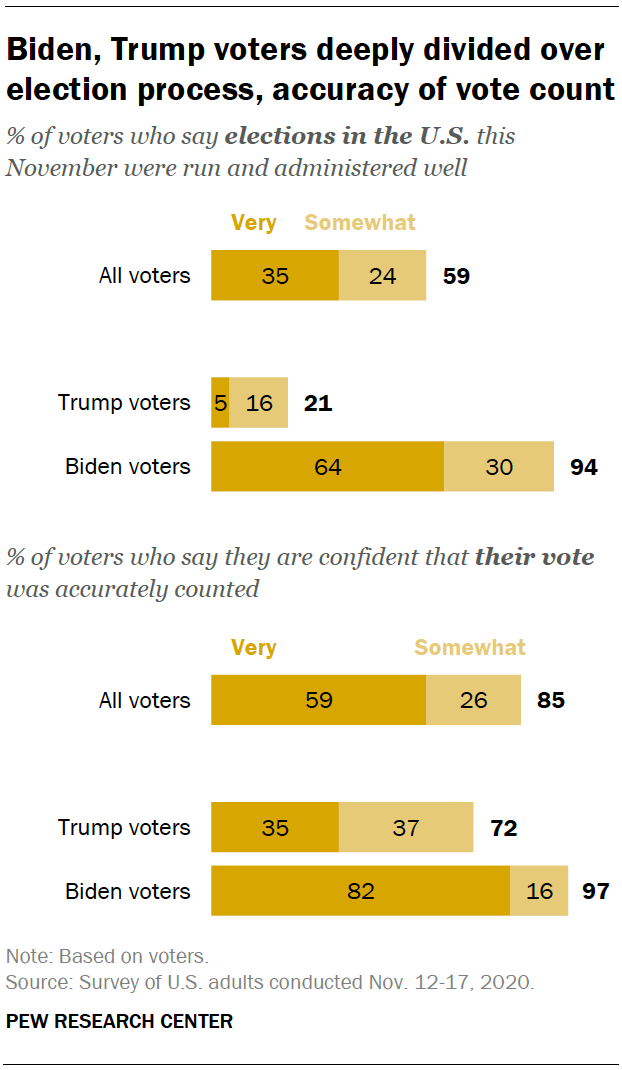 More than two weeks after the presidential election, there are sharp divisions between voters who supported Joe Biden and Donald Trump over nearly all aspects of the election and voting process, including whether their own votes were counted accurately.

Disagreements between supporters of the winning and losing candidates over the accuracy of presidential vote counts are not unusual, but the magnitude of the differences between Trump and Biden voters is striking. While 82% of Biden supporters are very confident their own vote was counted accurately, just 35% of Trump supporters say the same.

A majority of voters (62%) say Biden’s post-election conduct has been excellent or good, while just half as many (31%) give Trump positive ratings for his conduct since the election. About seven-in-ten (68%) view Trump’s conduct as only fair or poor, with a 54% majority rating it poor. 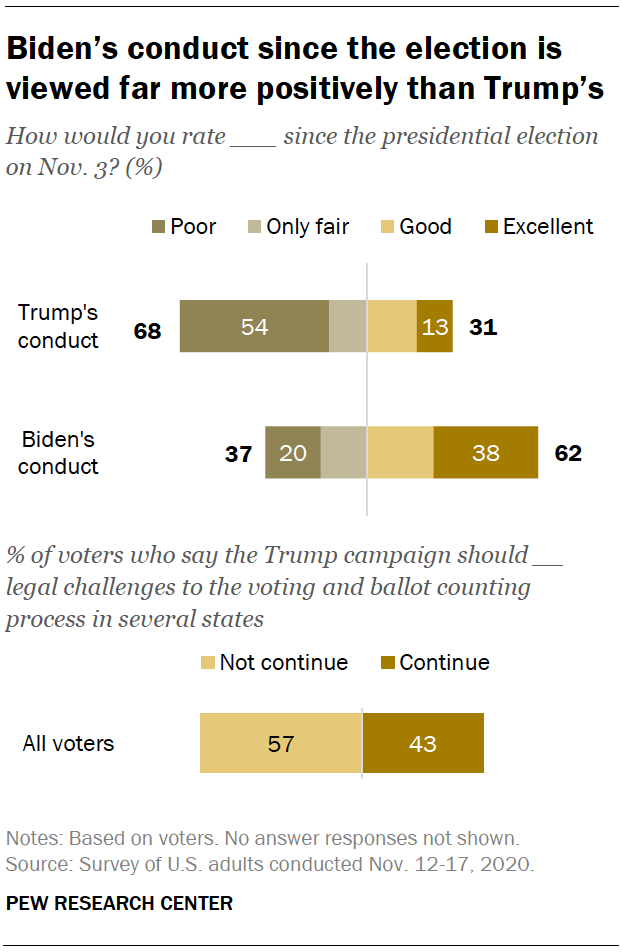 Both Biden and Trump, unsurprisingly, get largely positive ratings from their own supporters. However, about a third of Trump voters (34%) rate his conduct since the election as only fair or poor, compared with just 4% of Biden voters who give the former vice president low marks.

As disputes over the election continue, the nation has been struggling with a record surge in coronavirus cases. And, as with views of the election process, Biden and Trump supporters are far apart on how to address the COVID-19 surge. Most Biden voters (66%) favor tighter restrictions on public activity in their communities. But just 16% of Trump voters say the same; more than twice as many (44%) say there should be fewer restrictions, while 40% say they should remain about the same as they are currently.

The new survey by Pew Research Center, conducted Nov. 12-17 on the nationally representative American Trends Panel among 11,818 U.S. adults, including 10,399 who say they voted in the presidential election, finds far greater agreement about the need for additional governmental assistance in response to the coronavirus outbreak. 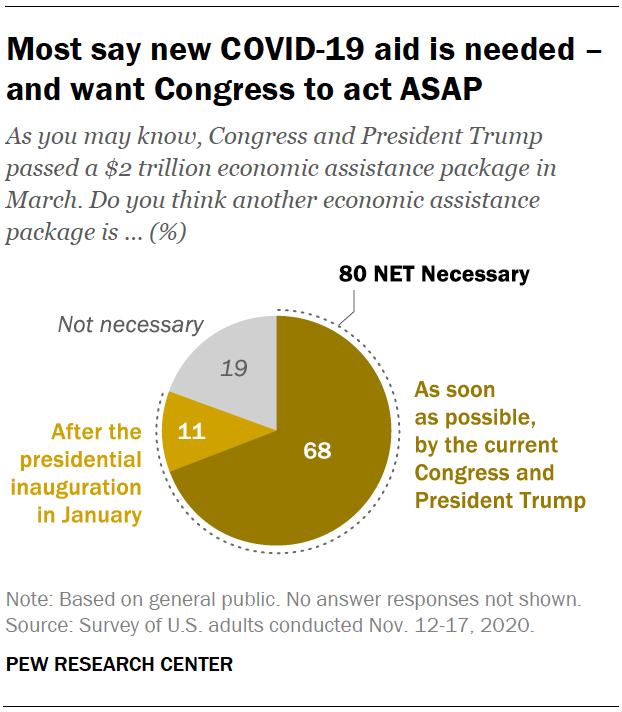 A large majority of Americans (80%) say it is necessary for the president and Congress to pass more coronavirus aid, on top of the $2 trillion package enacted in March.

And an overwhelming majority of those who view more assistance as necessary think Congress and the president should act on it as soon as possible, rather than waiting until after the presidential inauguration in January. About two-thirds of Americans (68%) say a new aid package is necessary and that it be acted upon by the president and current Congress.

Partisans diverge in views of future trajectory of nation’s economy. Views of the economy, which have been highly partisan for many years, have begun to shift following the election. While Republicans remain more positive than Democrats about current economic conditions, Democrats have become much more bullish in their views about the economy over the next year. Six-in-ten Democrats and Democratic-leaning independents say economic conditions will be better a year from now, compared with just 23% of Republicans and Republicans leaners. Last month, Republicans were far more likely than Democrats to say the economy would improve over the next year (65% of Republicans, 42% of Democrats). 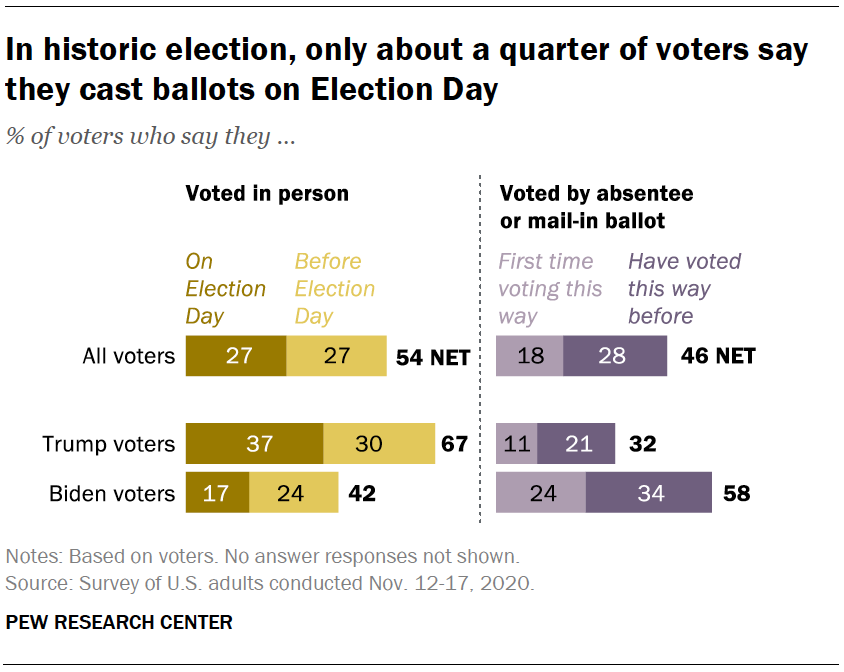 For most voters, casting ballots was “very easy.” Despite the dramatic changes in how Americans voted this year, a sizable majority (77%) say voting in the election was very easy. These views differ only modestly among those who voted by mail or absentee, and in person before Election Day or on Election Day itself. And while Trump and Biden supporters have substantial disagreements over the accuracy of the vote count and how the elections were administered, 81% of Biden voters and 73% of Trump supporters found it very easy to vote.

Next: 1. Biden, Trump and the post-election period
← Prev Page
You are reading page1Page2Page3Page4Page5Page6Page7Page8Page9
Next Page →

Sharp Divisions on Vote Counts, as Biden Gets High Marks for His Post-Election Conduct
1. Biden, Trump and the post-election period 2. Voters’ evaluations of the 2020 election process 3. The voting experience in 2020 4. Voters’ reflections on the campaign 5. Key post-election issues: The pandemic and the economy Acknowledgments Appendix: Categorization of states based on COVID restrictions Methodology