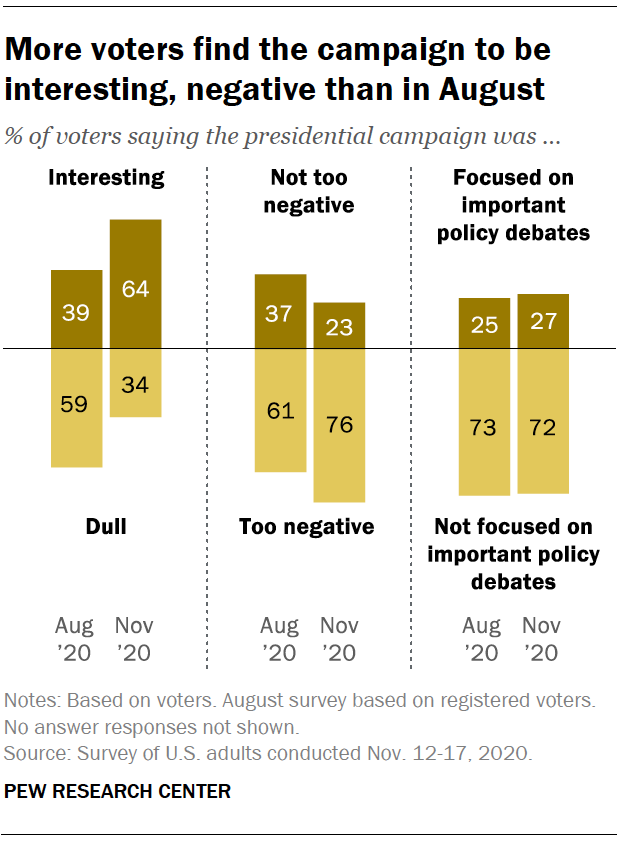 Reflecting on the 2020 presidential campaign, most voters find it was interesting rather than dull (64% vs. 34%), but also say it was too negative (76%) and not focused on important policy debates (72%).

Only about a quarter of voters (27%) say the 2020 campaign was focused on important policy debates, little different than the share of registered voters who said this in August (25%). 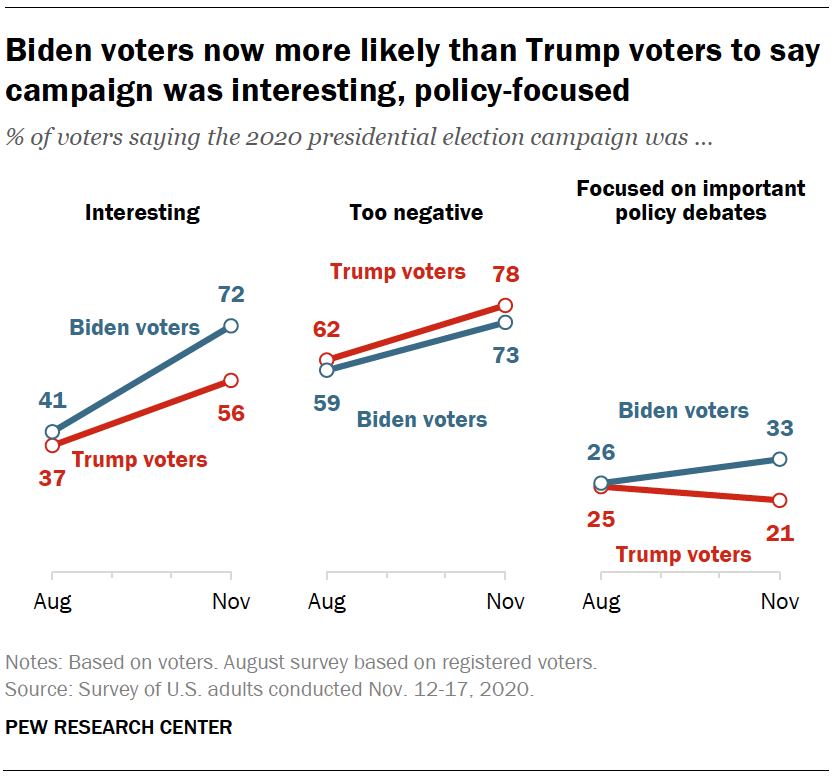 Most were satisfied with the choice of candidates 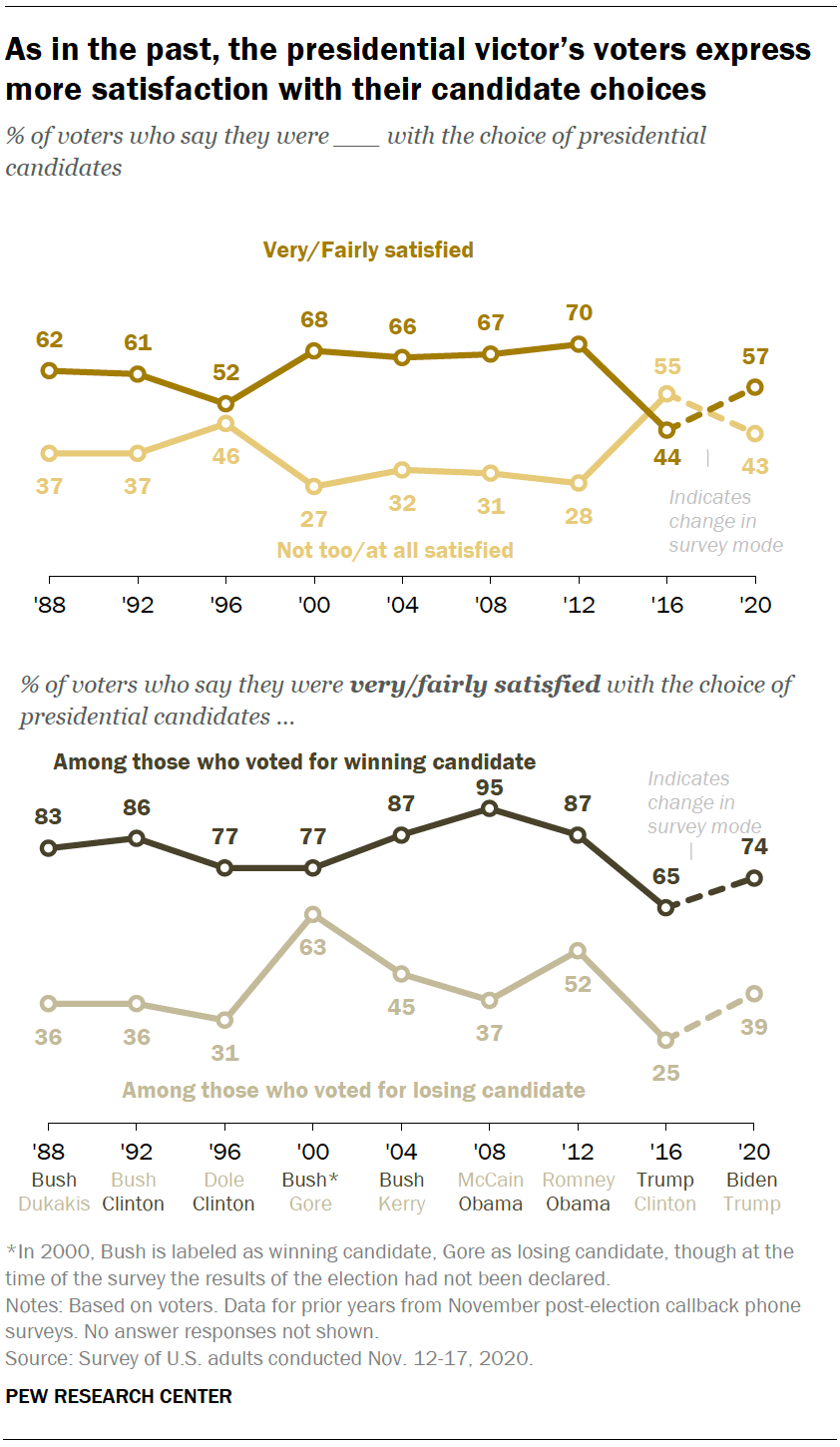 Four years ago, just 44% said they were very or fairly satisfied with the choice of candidates. (Note: Post-election surveys from 1988-2016 were conducted by phone, while the latest survey was conducted online; there may be modest mode differences on this question.)

Among those who voted for Biden, nearly three-quarters (74%) say they were very or fairly satisfied with the choice of presidential candidates, compared with 39% of Trump voters who say they were satisfied. 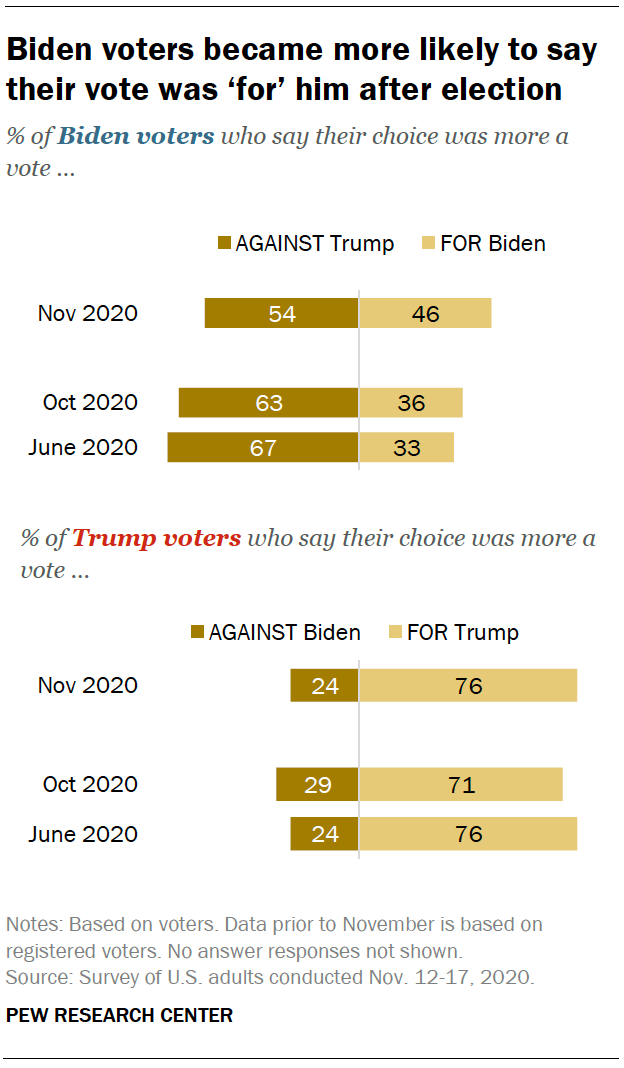 Slightly larger majorities of Biden supporters in June (67%) and October (63%) said their choice was more a vote against Trump than say this in the post-election survey (54%).

The share of Trump voters saying their vote was more a vote of support for Trump than against Biden is little different than it was in preelection surveys.

More than eight-in-ten voters (84%) say they made up their mind about who they were going to vote for in the 2020 presidential election before September. By comparison, in the wake of the 2016 election, a smaller – though still substantial – majority of 2016 voters (67%) reported having made their mind up before September. 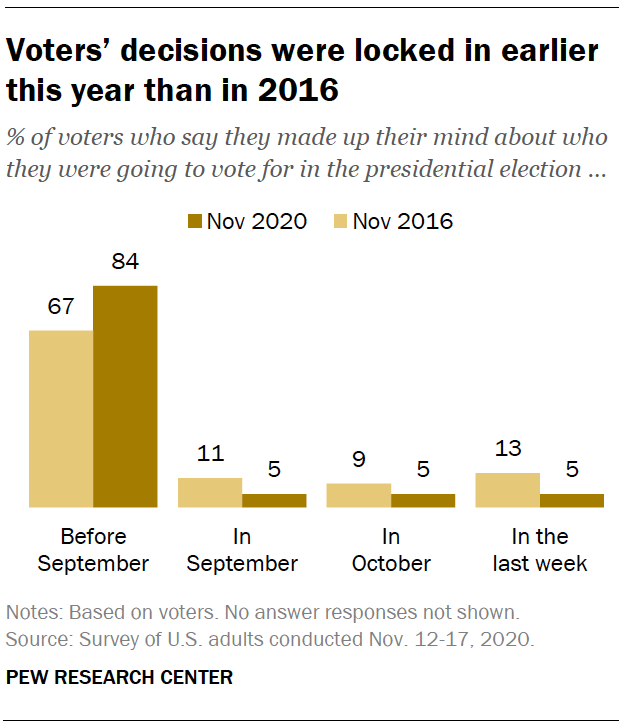 Trump voters are slightly more likely than Biden voters to report having made up their mind about their vote in the last week before Election Day (6% vs. 4%).

Next: 5. Key post-election issues: The pandemic and the economy
← Prev Page
Page1Page2Page3Page4You are reading page5Page6Page7Page8Page9
Next Page →

Sharp Divisions on Vote Counts, as Biden Gets High Marks for His Post-Election Conduct 1. Biden, Trump and the post-election period 2. Voters’ evaluations of the 2020 election process 3. The voting experience in 2020
4. Voters’ reflections on the campaign
Most were satisfied with the choice of candidatesJust over half of Biden voters said their vote was more ‘against Trump’ than ‘for Biden’
5. Key post-election issues: The pandemic and the economy Acknowledgments Appendix: Categorization of states based on COVID restrictions Methodology