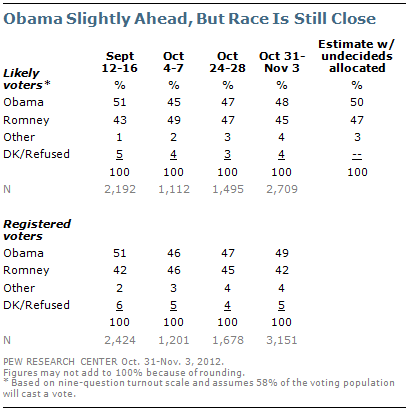 Barack Obama has edged ahead of Mitt Romney in the final days of the presidential campaign. In the Pew Research Center’s election weekend survey, Obama holds a 48% to 45% lead over Romney among likely voters.

The survey finds that Obama maintains his modest lead when the probable decisions of undecided voters are taken into account. Our final estimate of the national popular vote is Obama 50% and Romney 47%, when the undecided vote is allocated between the two candidates based on several indicators and opinions. 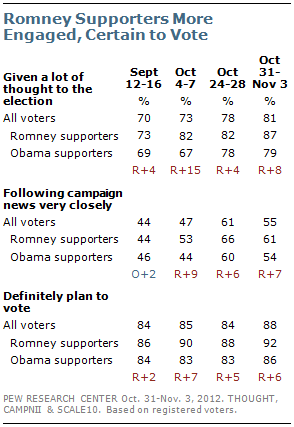 Voter turnout, which may be lower than in 2008 and 2004, remains one of Romney’s strengths. Romney’s supporters continue to be more engaged in the election and interested in election news than Obama supporters, and are more committed to voting. 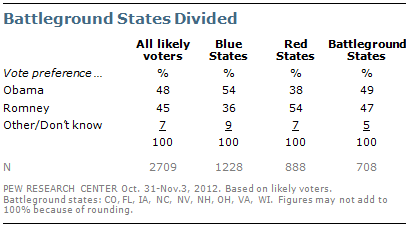 There are many good signs in the poll for Obama. He has regained much of the ground he lost following his lackluster performance in the first presidential debate. In mid-September, Obama led Romney by eight points among likely voters, but in early October, shortly after the debate, he trailed by four points. 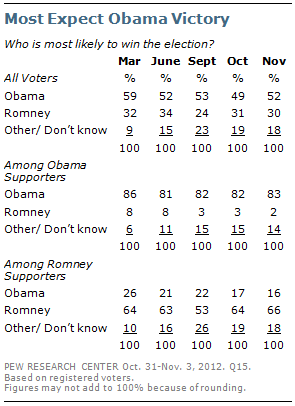 Similarly, a much greater percentage of Obama supporters than Romney supporters are voting for him rather than against his opponent (80% for Obama vs. 60% for Romney), another historical indicator of likely victory. And far more registered voters expect an Obama victory than a Romney victory on Nov. 6 (52% vs. 30%).

Obama’s increases in likely voter support are most notable among women, older voters, and political moderates. Women now favor Obama by a 13-point

margin (53% to 40%), up from six points a week ago and reflecting a shift toward Obama since early October. Right after the first presidential debate, the women’s vote was split evenly (47% each). Men, by comparison, favor Romney by a 50% to 42% margin, with little change in the past month.

Romney continues to lead among voters age 65 and older, by a nine point margin (51% to 42%) in the current survey. But that is only about half of the 19-point lead he held among seniors just a week ago. Political moderates now favor Obama by 21 points (56%-35%).

Another notable gain for Obama, perhaps reflecting Hurricane Sandy’s effect on the race, comes in a region he was already secure in: the Northeast. He has increased his lead over Romney from nine points (52%-43%) to 21 points (56%-35%) there over just the past week. While the storm’s impact on many parts of the Northeast has been substantial, an analysis of the polling data shows no substantial underrepresentation of voters in the most heavily affected counties.

Early voting makes up a large share of votes cast, but there is no sign that they are breaking decisively toward either candidate. Among the 34% of likely voters say they have already cast their ballot, 48% say they supported Obama, 46% Romney. That is roughly the same margin as among likely voters who plan to vote on Election Day (47% Obama, 45% Romney).