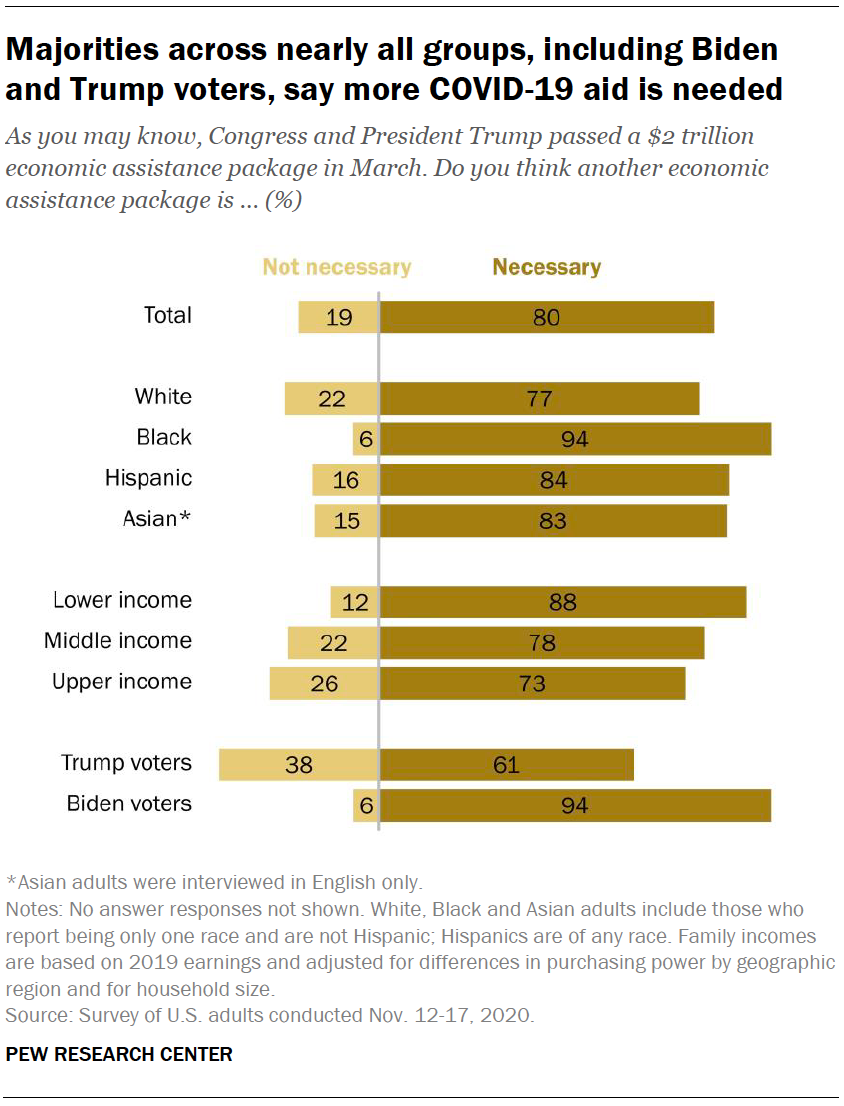 As Congress and the White House continue to wrangle over the size and necessity of a new coronavirus assistance bill, an overwhelming majority of Americans (80%) say they believe more aid is necessary. Only about one-in-five (19%) say that a second major relief package is not necessary. This is comparable to the share who said in April that another bill would be necessary.

When asked if President Trump and the current Congress should pass a new economic aid package as soon as possible or if the package can wait until after the presidential inauguration in January, 85% of those who think additional aid is needed say it should be passed as soon as possible.

Overall, 68% of the public say a new economic aid package is needed in response to the coronavirus and that it should be passed as soon as possible.

Sizable majorities across nearly all demographic and income categories say more economic assistance is needed. However, while an overwhelming share of those who voted for Joe Biden (94%) say a new aid package is needed, a smaller majority of Trump supporters (61%) say additional assistance is necessary. 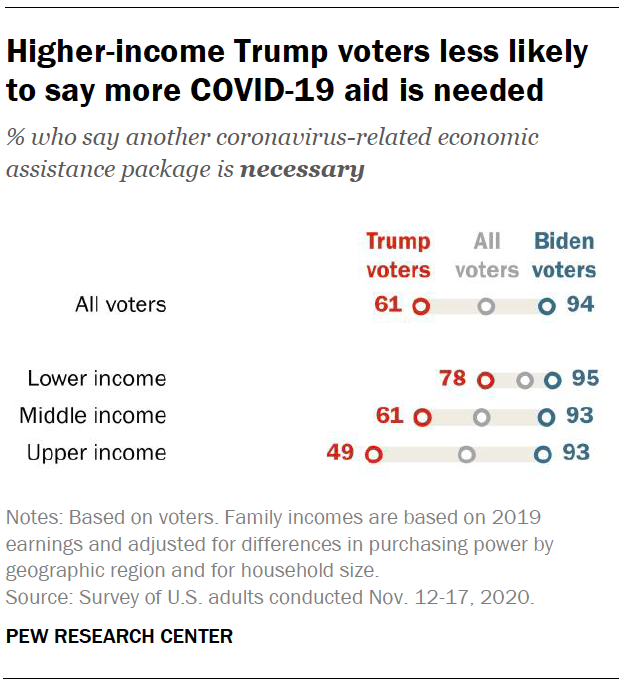 There also are differences by household income in views of the necessity of a new aid package, with larger shares of lower income adults saying such assistance is needed.

Majorities of more than 90% of Biden voters, regardless of household income, say that a second major assistance package is necessary.

As the nation struggles with a sharp rise in coronavirus cases, more than four-in-ten Americans (44%) say there should be more restrictions on public activity in their area, 35% say the limits on activity should stay about the same as they are now and 21% favor fewer restrictions. 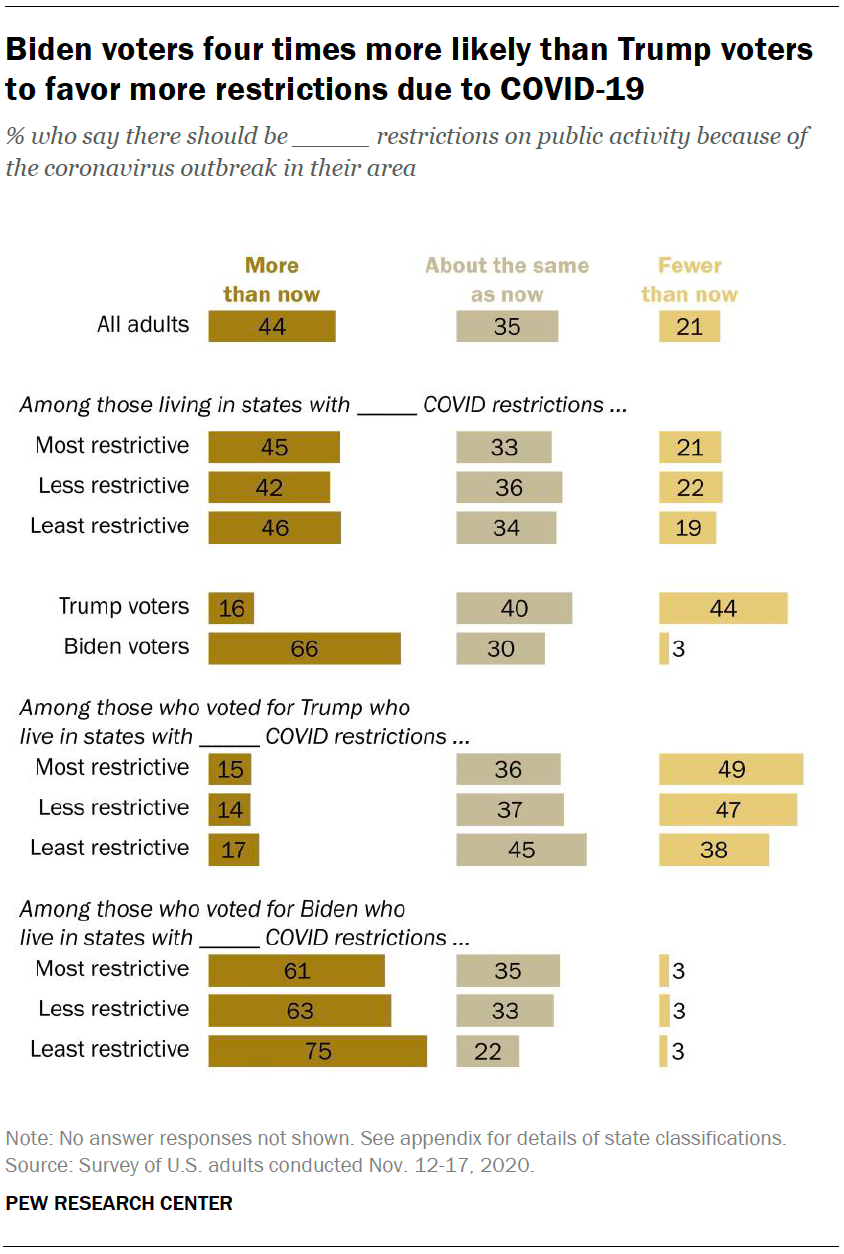 Voters’ candidate preferences are a much bigger factor than the level of current coronavirus restrictions in their states or the impact the coronavirus has had on the states where they live.

Two-thirds of Biden voters say there should be more restrictions on public activity in their area because of the coronavirus outbreak, while only half as many say that restrictions should remain as they are (30%) or be loosened (3%).

Just 16% of Trump voters favor more restrictions on public activity due to the outbreak. Far more want to maintain current restrictions (40%) or say there should be fewer restrictions than there are currently (44%).

Overall opinions about limits on public activity because of the coronavirus outbreak vary only modestly between states like Massachusetts, New York, and New Jersey, which have continued to keep relatively strict social-distancing policies in place (including mask mandates, mandatory quarantines for travelers, limits on gatherings and closures or restrictions for bars and restaurants) and states that have not enacted these policies or rolled them backed as they try to reopen their economies (including Florida, Missouri, South Dakota and Wyoming).

Confidence in Biden and Trump on coronavirus, economy little changed 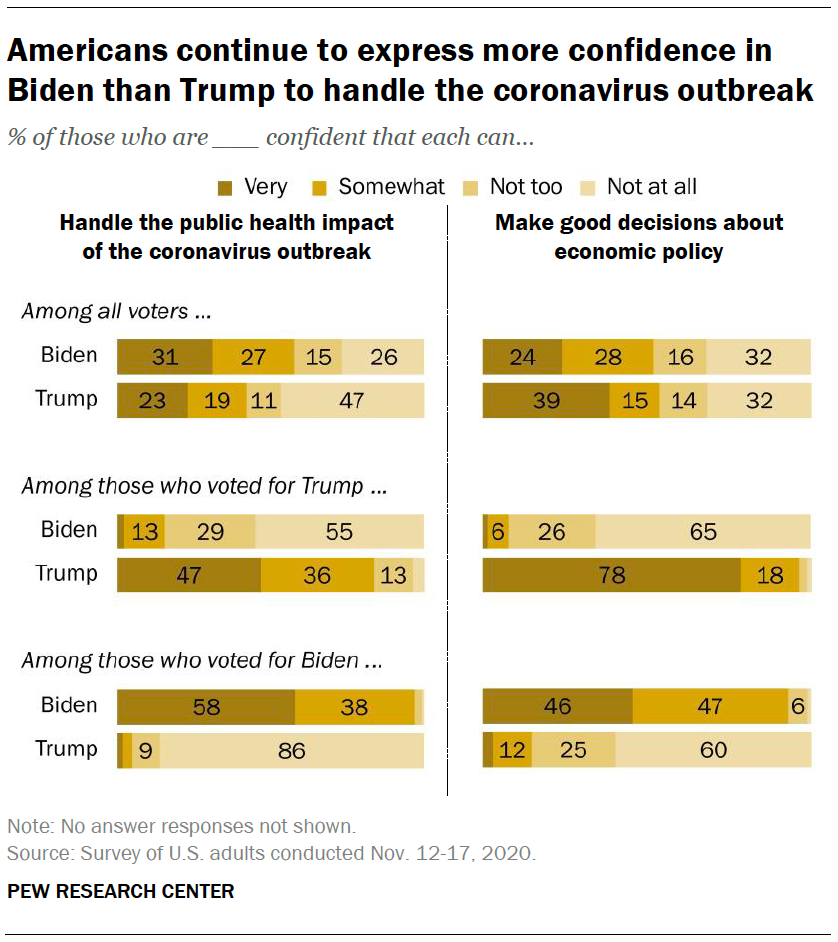 Voters remain more confident in Biden than Trump to handle the public health impact of the coronavirus outbreak. Overall, 58% of voters are very or somewhat confident in President-elect Biden’s ability to handle the outbreak. Only 42% of voters say the same about Trump. The attitudes of voters who voted in the Nov. 3 election differ little from those of registered voters measured in October.

While Biden and Trump voters express far more confidence in their candidate than in his opponent, Biden voters are especially critical of Trump’s handling of the coronavirus. Among Biden voters, 86% say they are not confident at all in Trump’s handling of the coronavirus; far fewer Trump voters (55%) have no confidence at all in Biden. 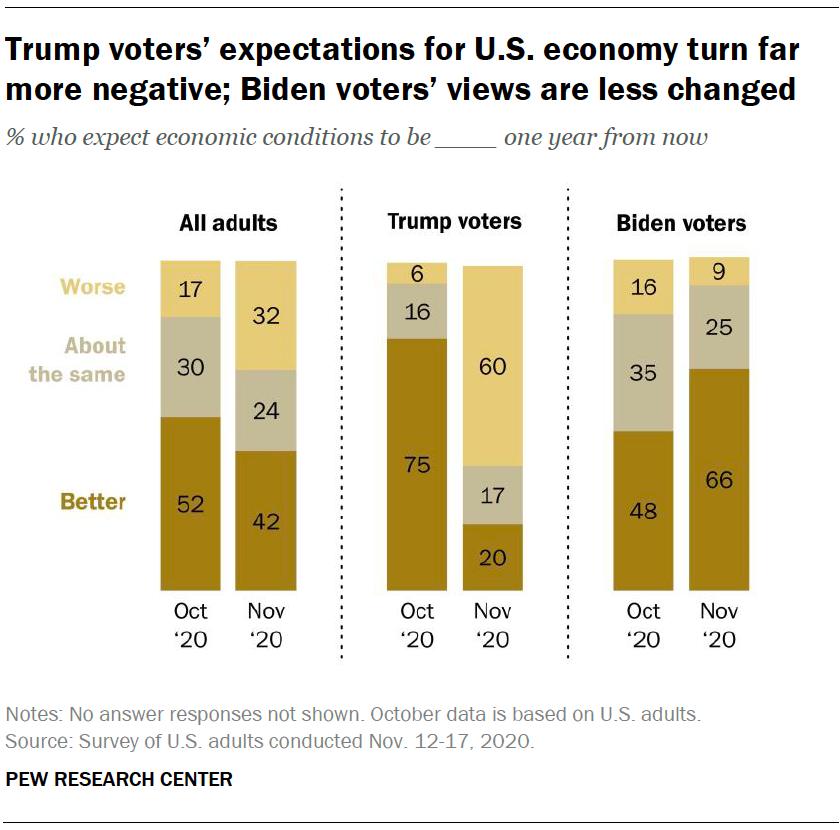 Overall, Americans’ views of the current state of the nation’s economy not much changed from before the election, but voters’ expectations about the future have shifted dramatically.

Biden voters have become more optimistic following the election, but the change has been less pronounced compared with Trump voters. Last month about half of Biden supporters (48%) said they expected economic conditions to improve over the next year. Today, 66% say they expect the nation’s economy to get better.

Key findings about voter engagement in the 2020 election
Large Shares of Voters Plan To Vote a Straight Party Ticket for President, Senate and House
U.S. Public Now Divided Over Whether To Get COVID-19 Vaccine
Americans Paid Close Attention as Election Returns Came In
Most Republicans Approve of Trump’s Post-election Messaging, but About a Third Say It Has Been Wrong