Pew Research Center conducted this study to understand how the coronavirus outbreak has impacted Americans’ views on economic issues. For this analysis, we surveyed 4,917 U.S. adults in April 2020. Everyone who took part is a member of Pew Research Center’s American Trends Panel (ATP), an online survey panel that is recruited through national, random sampling of residential addresses. This way nearly all U.S. adults have a chance of selection. The survey is weighted to be representative of the U.S. adult population by gender, race, ethnicity, partisan affiliation, education and other categories. Read more about the ATP’s methodology. 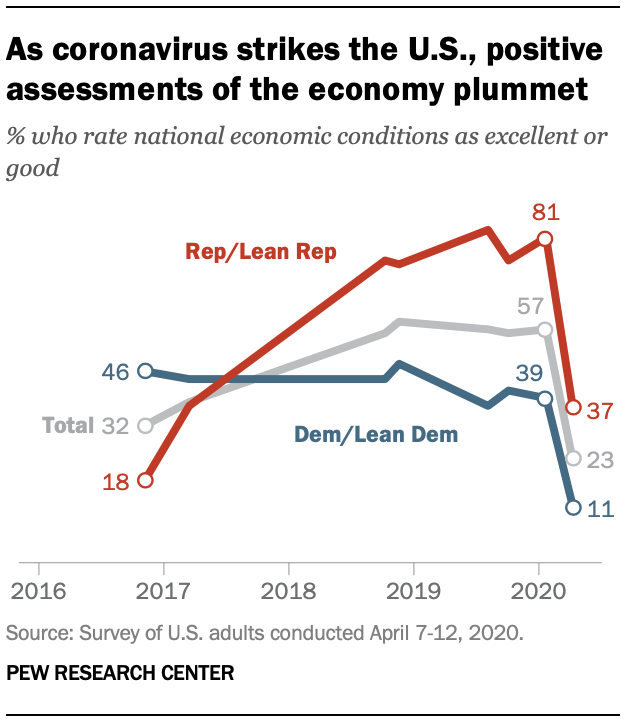 Amid record unemployment claims and the disruption of commercial activity caused by the novel coronavirus outbreak, the public’s assessments of the U.S. economy have deteriorated with extraordinary speed and severity. Just 23% of Americans now rate economic conditions in the country as excellent or good, down sharply from 57% at the start of the year.

Most now say the economy is in either only fair (38%) or poor (38%) shape. In January, just 9% of Americans said economic conditions were poor.

Related: About Half of Lower-Income Americans Report Household Job or Wage Loss Due to COVID-19

As the public confronts a grim new economic reality, there is not only overwhelming support for the massive economic aid package passed last month by President Donald Trump and Congress, but also widespread belief that an additional aid package will be needed.

Nearly nine-in-ten U.S. adults (88%) say the $2 trillion economic aid package passed in March was the right thing to do, including identical majorities of Republicans and Democrats (89% each). More than three-quarters (77%) think it will be necessary for the president and Congress to pass legislation providing additional economic assistance.

Majorities of Americans say the aid package enacted last month will do a great deal or a fair amount to help a range of actors, including large businesses (77%), small businesses (71%), state and local governments (67%) and unemployed people (68%).

However, only about half (49%) expect it to benefit self-employed people, while 46% think it will help their own household a great deal or fair amount. In part, this reflects the fact that lower-income adults are far more likely than more affluent people to say the aid package will benefit them. A 59% majority of those in lower-income households believe the federal aid will help them, compared with just 22% in upper-income households. (To analyze these questions further, visit the Election News Pathways data tool.)

The new national survey by Pew Research Center, conducted April 7 to 12 among 4,917 U.S. adults on the Center’s American Trends Panel, finds that most Americans believe the economic problems arising from the coronavirus outbreak will persist for months to come. A majority (71%) says the economic problems resulting from the outbreak will last for at least six months, including 39% who say they will last a year or more. Just 29% expect these problems to last six months or less.

Yet the public does expect some improvement over time from today’s dire economic conditions. A majority (55%) expects that economic conditions in the country as a whole will be better a year from now than they are today, while 22% say they will be worse and 22% expect conditions to be about the same as they are now. 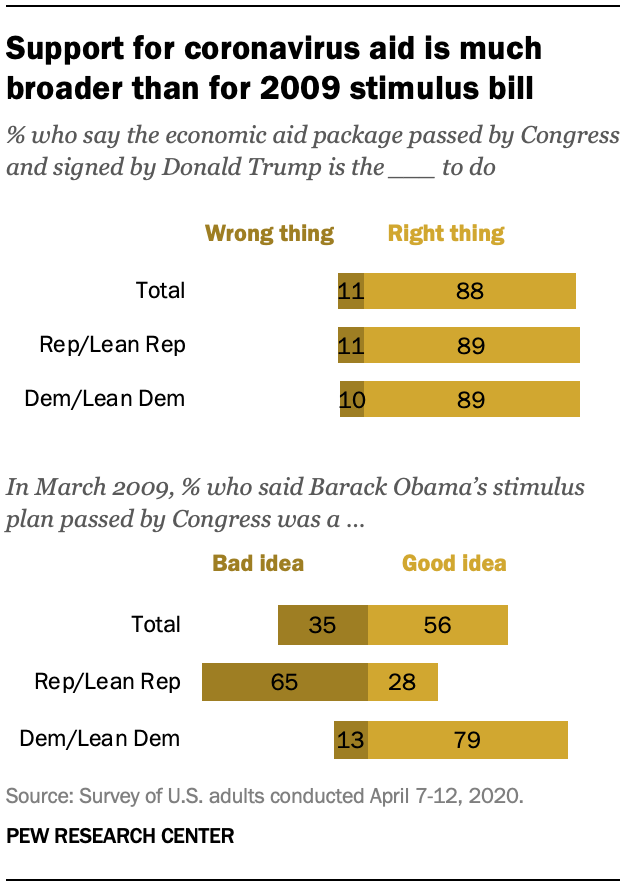 The survey finds that the public’s reactions to the recently passed economic aid package differ markedly from views of the economic stimulus plan enacted during the early months of Barack Obama’s presidency. At that time, views of the economy were even more negative than they are today, with 68% saying economic conditions were poor (38% say that today).

In March 2009, 56% said the $800 billion stimulus plan put forth by Barack Obama and passed by Congress was a good idea; about a third (35%) said it was a bad idea. While the question about the economic package passed in March differs somewhat, 88% of the public says it was the right thing to do.

In contrast to the extensive bipartisan support for coronavirus aid, support for the 2009 stimulus aid package was divided along partisan lines: 79% of Democrats and Democratic-leaning independents said it was a good idea, but just 28% of Republicans and Republican leaners said the same.

The dramatic plunge in positive assessments of the national economy as a result of the coronavirus outbreak is steeper than declines in economic ratings seen during the last two recessions. Before they took a sudden negative turn, economic attitudes were historically positive. Just three months ago, the public’s views of the national economy were more positive than they had been at any point over the past 20 years.

This is very different from the Great Recession, which began in December 2007. Even before the recession and subsequent financial crisis, the public’s views of the national economy were not all that positive. They declined more gradually in 2007-2008 and remained very negative for the next several years. 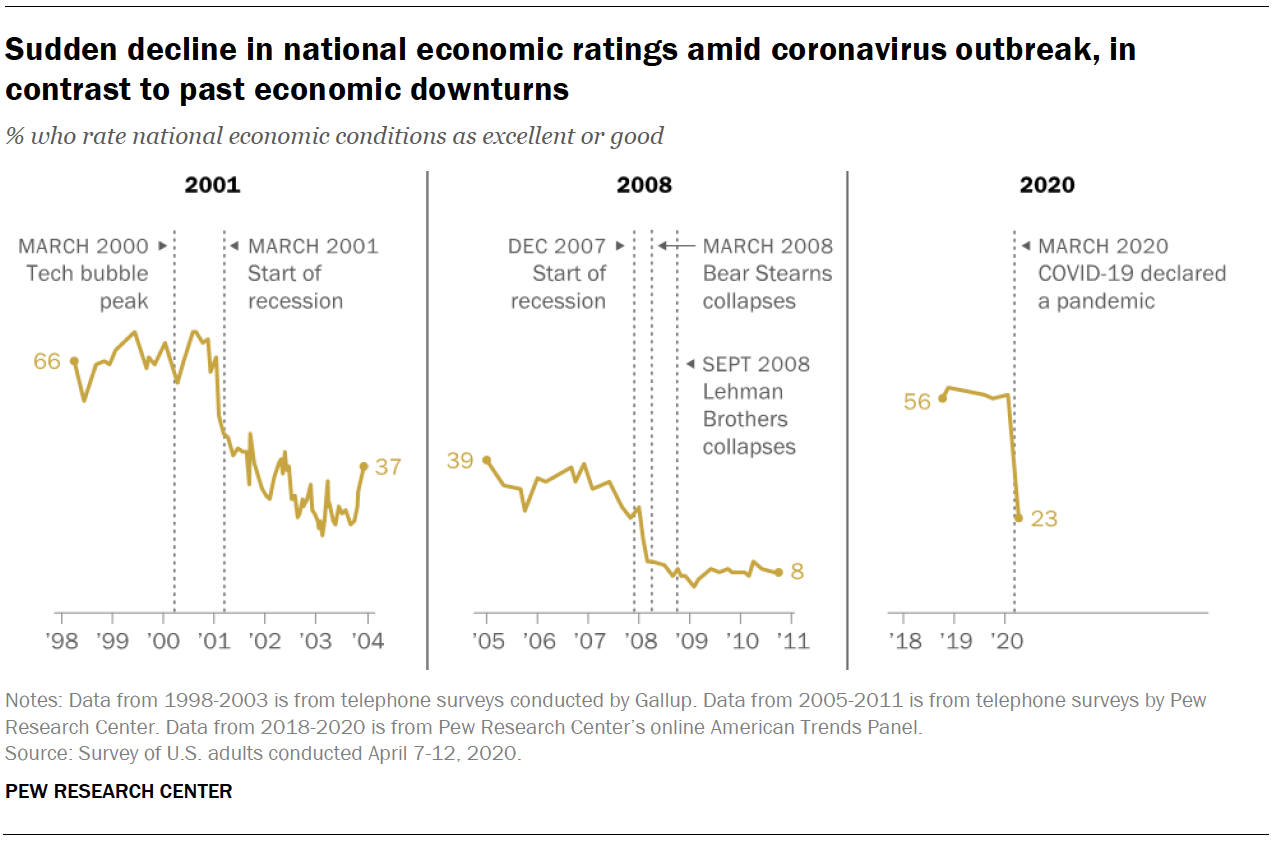 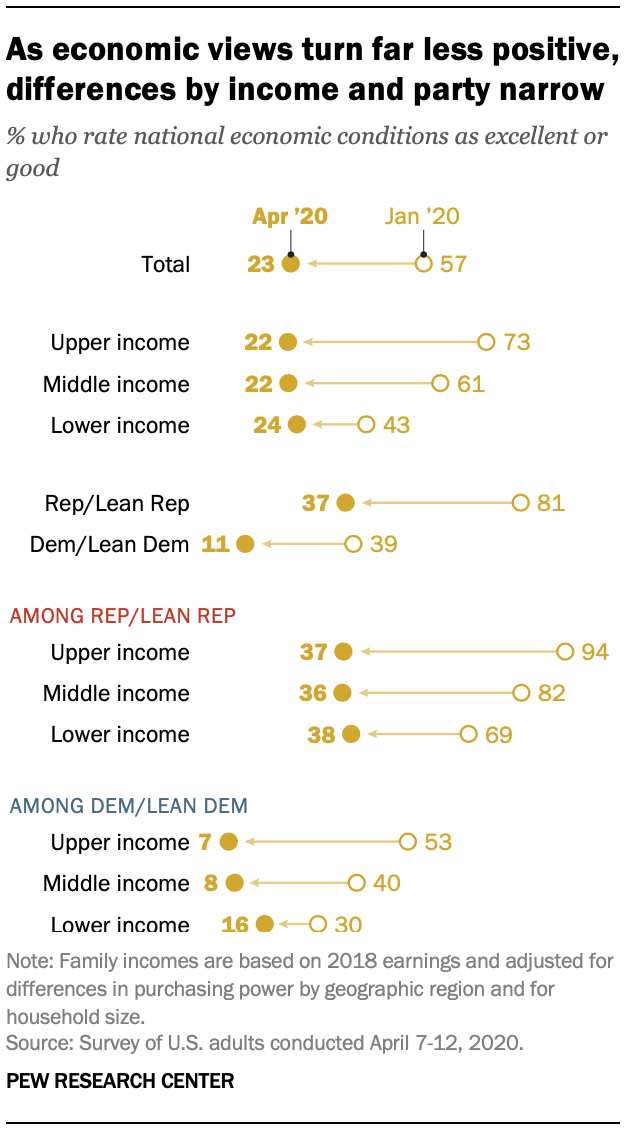 After the dot-com bubble burst in the early 2000s, views of the economy slipped precipitously, but far less rapidly than they have during the coronavirus outbreak. While public views of the economy prior to the economic trouble of the early 2000s were even brighter than they were prior to the COVID-19 outbreak, it took considerably longer for perceptions to fall as far as they already have in the first three months of 2020.

While the public takes a far more negative view of the economy, opinions about economic conditions are far less divided by income and partisanship than they were prior to the crisis.

In January, those living in upper-income households were 30 percentage points more likely than those living in lower-income households to say economic conditions in the country were excellent or good (73% vs. 43%). Today, there are no significant differences across income tiers in positive ratings of the national economy; only about a quarter in each income category rates conditions as excellent or good.

The gap in positive economic ratings between Republicans and Democrats has decreased from 42 percentage points at the start of the year to 26 points today. Republicans remain somewhat more likely than Democrats to say the economy is in excellent or good shape (37% vs. 11%).

Consistent with the patterns across income tiers overall, differences in economic ratings by income among both Republicans and Democrats are now much smaller than they were in January.

Who will benefit from the federal aid package? 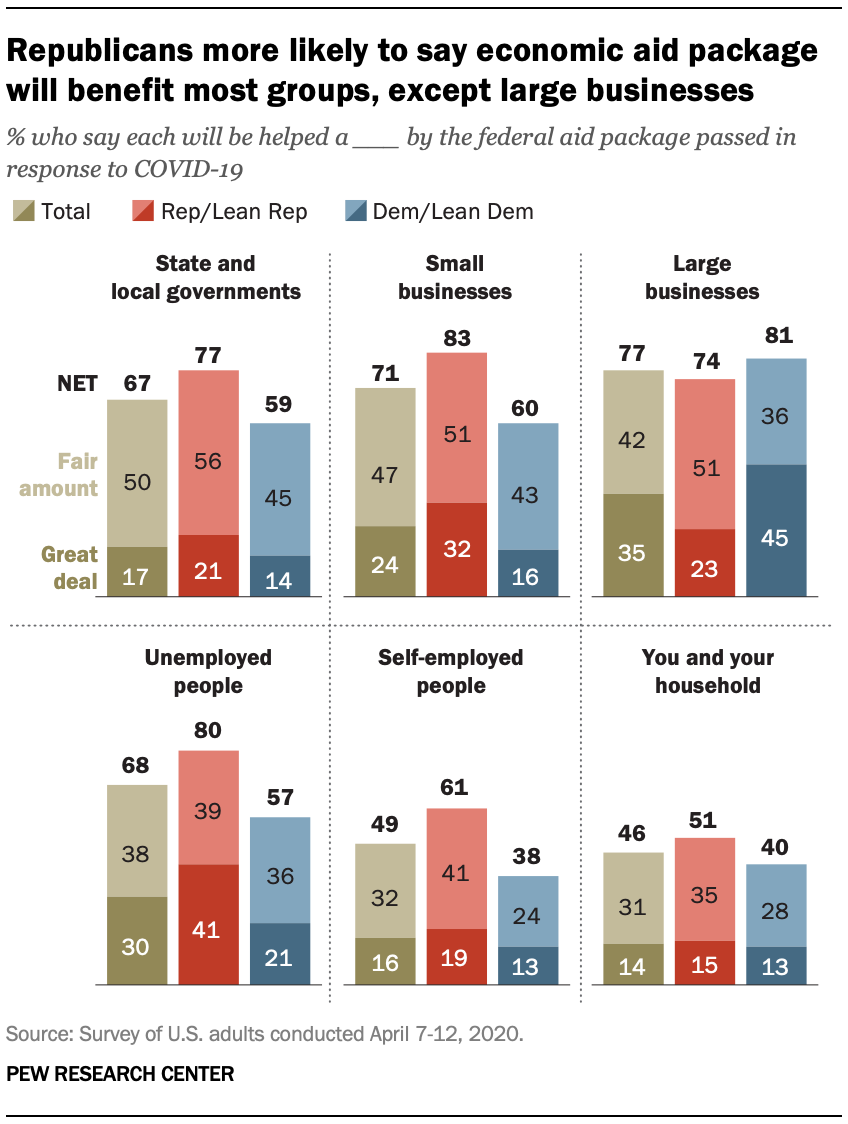 Both Republicans and Democrats see their own household as less likely to be helped by the federal aid than large and small businesses, state and local governments and unemployed people. Still, partisan differences extend to personal assessments.

There also are significant differences by household income in the shares who expect to be helped by the COVID-19 federal aid package.

A majority of Americans in lower-income households (59%) think the federal response will help them either a great deal (25%) or a fair amount (34%). About half (48%) of middle-income earners think the aid package will help them at least a fair amount. Upper-income earners are far less likely to say this: Just 22% expect the federal response to help their own household.

Republicans and Republican leaners are more likely than Democrats and Democratic leaners to expect their household to be helped by the aid package across all income tiers.

Many say economy will be better a year from now 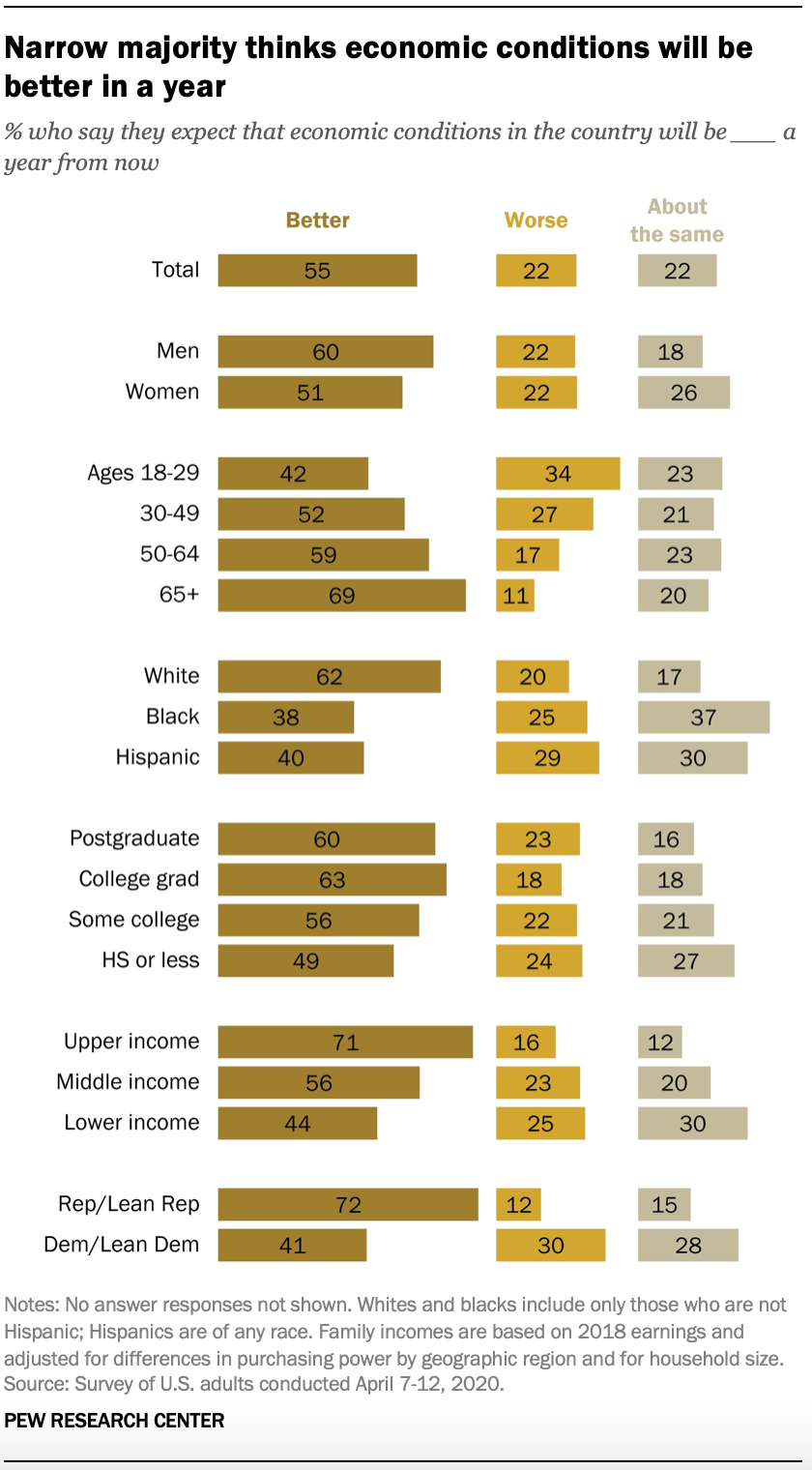 Although Americans have become much more negative about the current state of the economy, 55% expect that things will be better a year from now. Just 22% think they will be worse; another 22% think economic conditions will be about the same as they are today.

Younger people are much less optimistic that economic conditions will improve compared with older Americans. Nearly seven-in-ten of those ages 65 and older (69%) think the economy will be better in a year. By contrast, fewer than half (42%) of those ages 18 to 29 think things will be better, while 34% expect conditions to be worse in a year. While younger people were slightly less optimistic about the future economy even prior to the current downturn, the age gap is now substantially wider than it was in January.

In addition, white adults (62%) are more likely than black (38%) and Hispanic (40%) adults to say conditions will be better in a year.

Some of largest differences in economic outlook are between Republicans and Democrats, though this partisan gap is somewhat narrower than it was in January. Today, 72% of Republicans and Republican leaners think conditions will be better in a year; relatively few think they will be worse (12%) or the same (15%). Democrats and Democratic leaners are more divided in their views: 41% expect the economy to be better, while 30% think it will be worse and 28% think it will be about the same.

How long will economic problems from the COVID-19 outbreak last?

While a narrow majority expects overall economic conditions to be better in a year, the public also thinks the negative economic impacts resulting from the coronavirus outbreak will persist for some time. 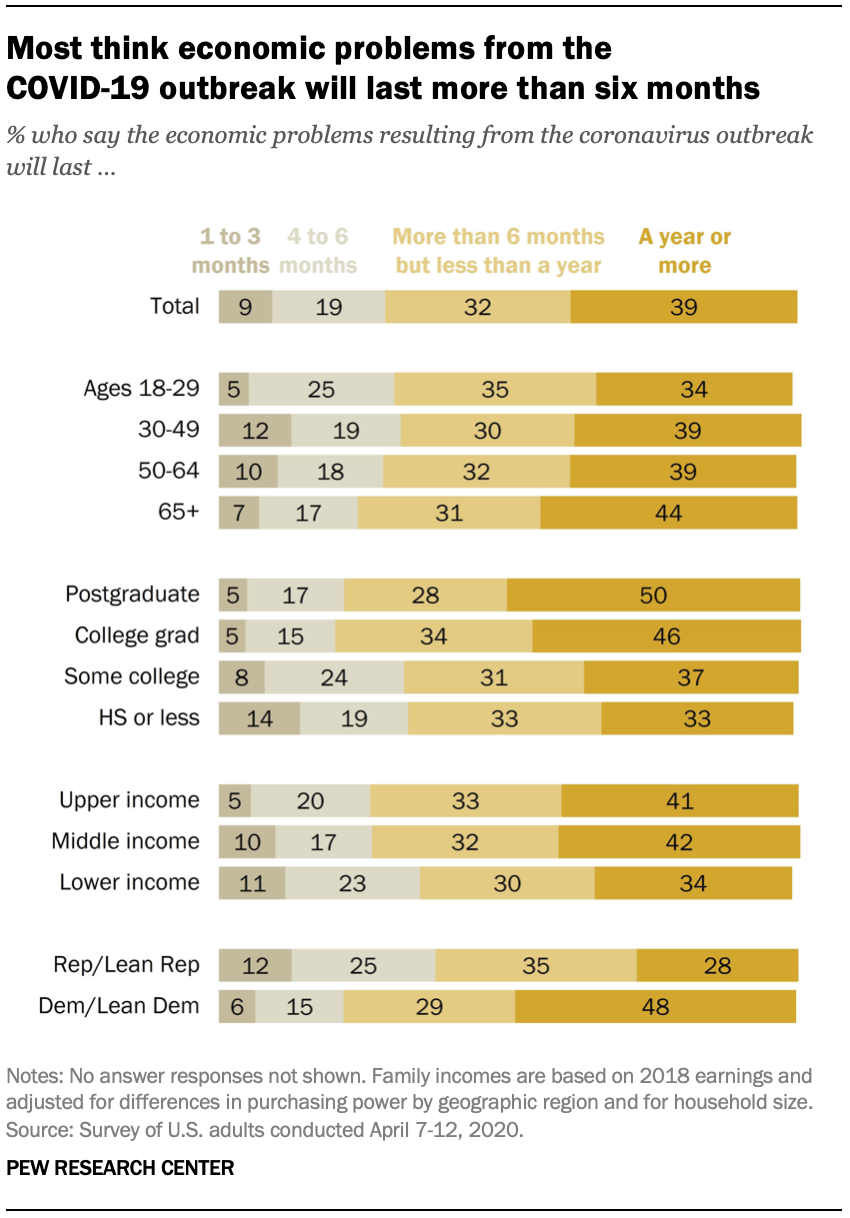 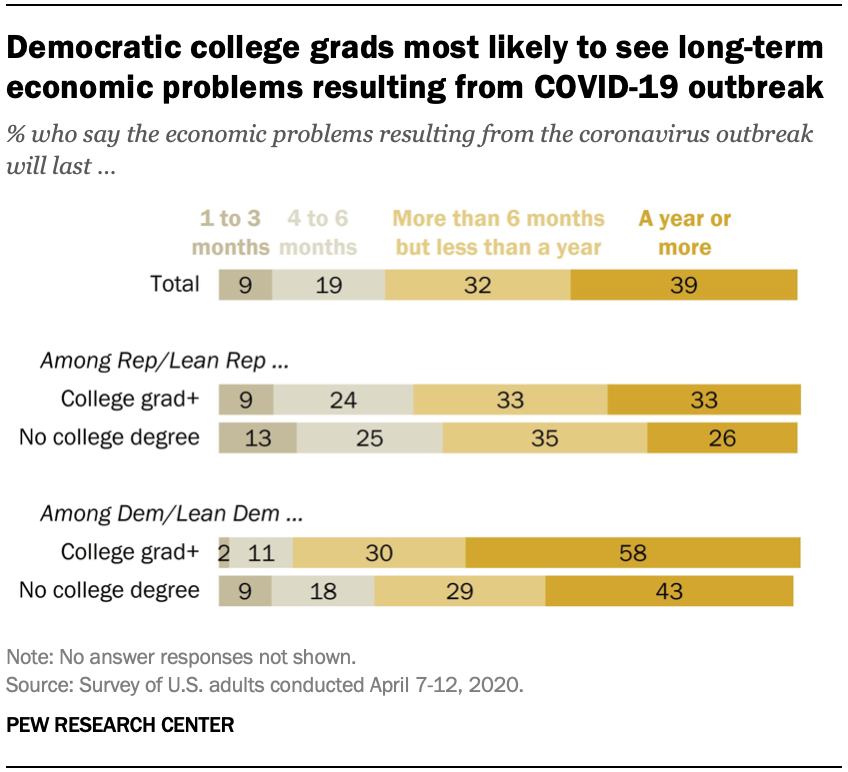 These differences are particularly pronounced among Democrats and Democratic-leaning independents. Among Democrats, those with at least a college degree are 15 percentage points more likely than those with no degree to say that the economic impact of the coronavirus outbreak will last at least a year (58% compared with 43%).

A third of college-educated Republicans think the economic problems resulting from the outbreak will last a year or more, compared with 26% of Republicans with no college degree.

Will another federal aid package be necessary?

At this stage of the outbreak, 77% of the public thinks it will be necessary for the president and Congress to pass another bill to provide more economic assistance for the country. 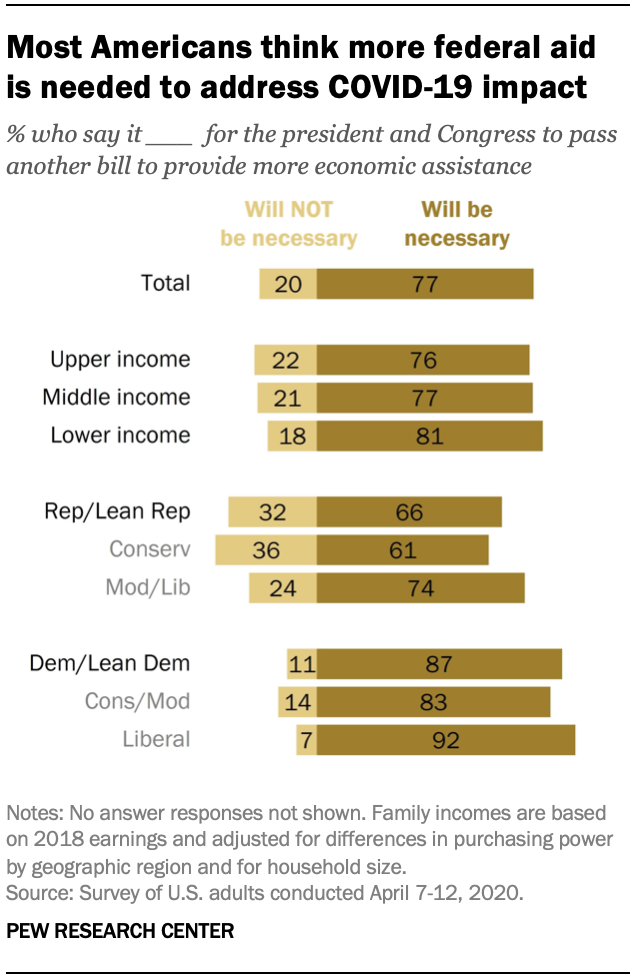 While clear majorities in both parties say additional economic assistance will be necessary, there is less bipartisan unanimity in views about a follow-up bill than about the previous aid package. While nearly nine-in-ten Democrats say another bill will be necessary, a narrower majority of Republicans (66%) say the same.

Even as national economic ratings have plummeted, personal financial assessments have been far more stable. 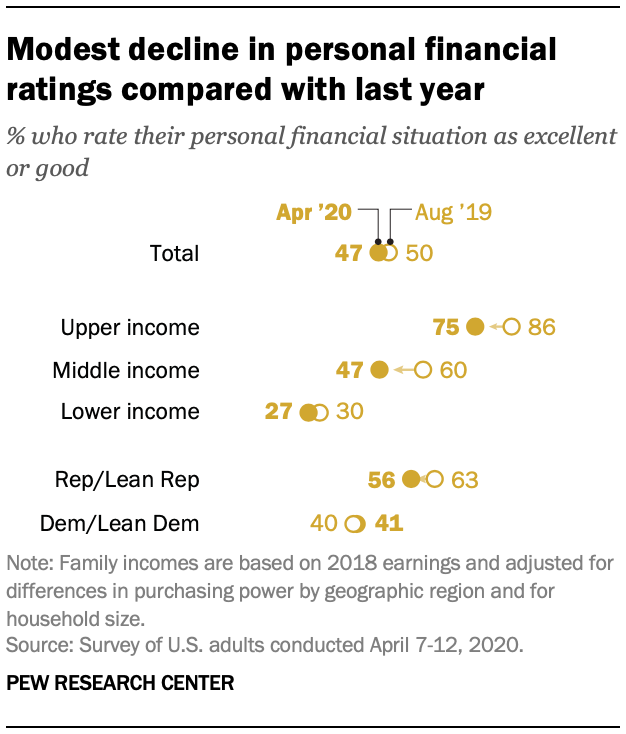 While the decline in overall personal financial ratings has been modest, a new analysis of the coronavirus outbreak’s impact on family finances finds that 43% say someone in their household has taken a pay cut or lost a job as a result of the outbreak.

In part, the difference in these two measures is tied to the fact that those who already rated their own personal financial situation as only fair or poor in August of 2019 are significantly more likely to say their household has experienced wage cuts or job loss as a result of the coronavirus outbreak than those who rated their finances more positively last summer.

The public’s expectations for the direction of their future financial situation is also little changed: 42% now expect their personal financial situation to be better a year from now than it is today, while 46% say it will be about the same and 12% expect it to be worse.