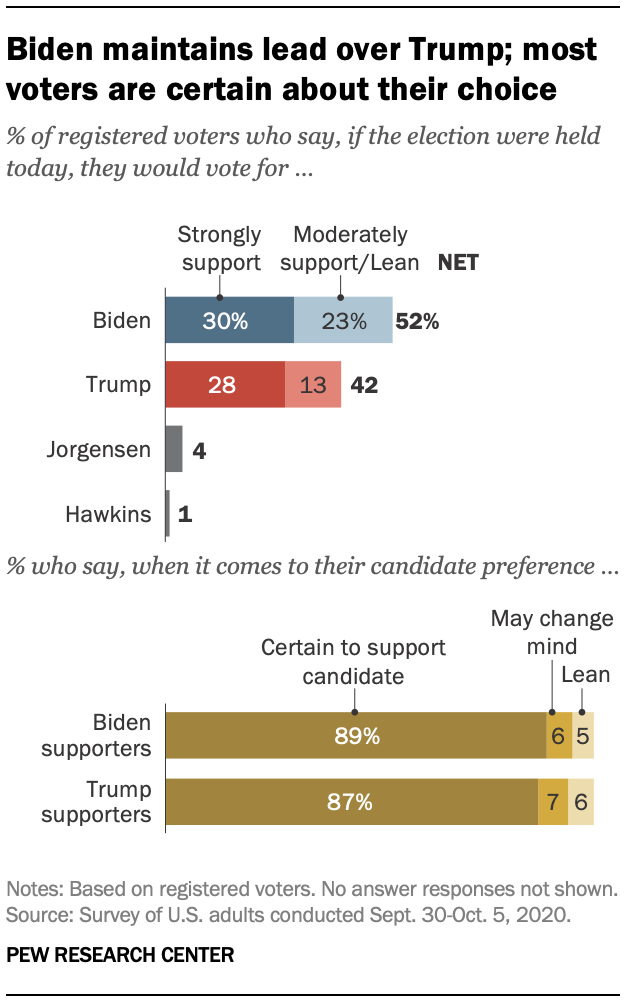 As was the case in 2016 at a similar point in the presidential campaign, voters feel certain about their choices: 89% of Biden voters say they are certain to support their preferred candidate; 87% of Trump voters say the same. Only small shares of either candidate’s supporters say there is a chance they will change their mind (less than 10% of each).

Trump, however, continues to hold an advantage in the share of his voters who say they support him strongly compared with Biden. Today, 68% of Trump voters say they “strongly support” their preferred candidate, compared with 57% of Biden’s voters. 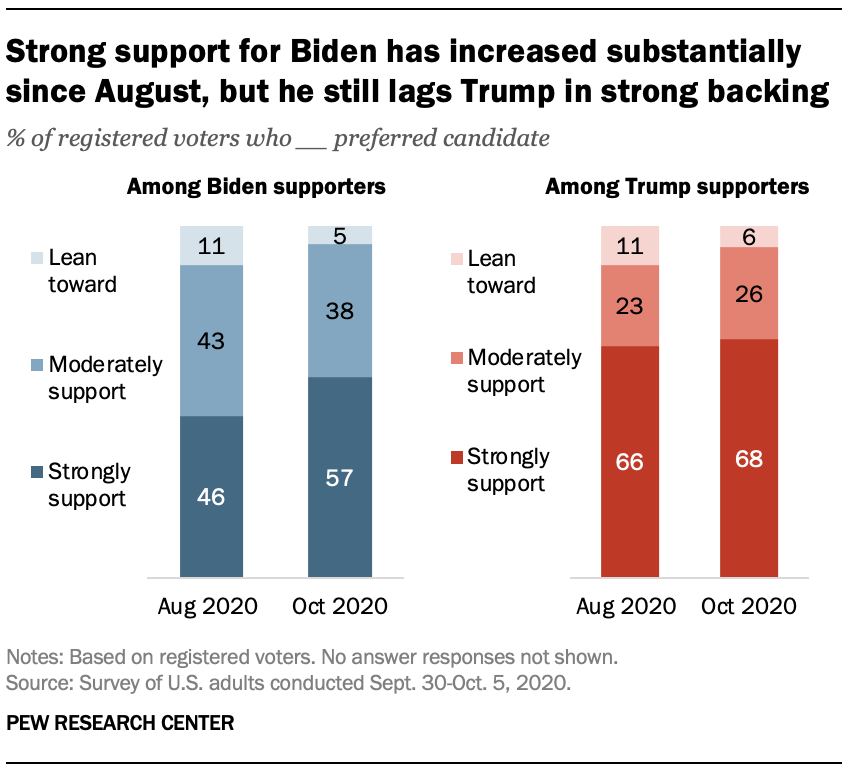 This gap in strength of support mirrors other presidential election years with an incumbent president running for reelection. In 2012, Barack Obama held an advantage over Mitt Romney in strong support; and in 2004, George W. Bush enjoyed more strong support among his voters than John Kerry. 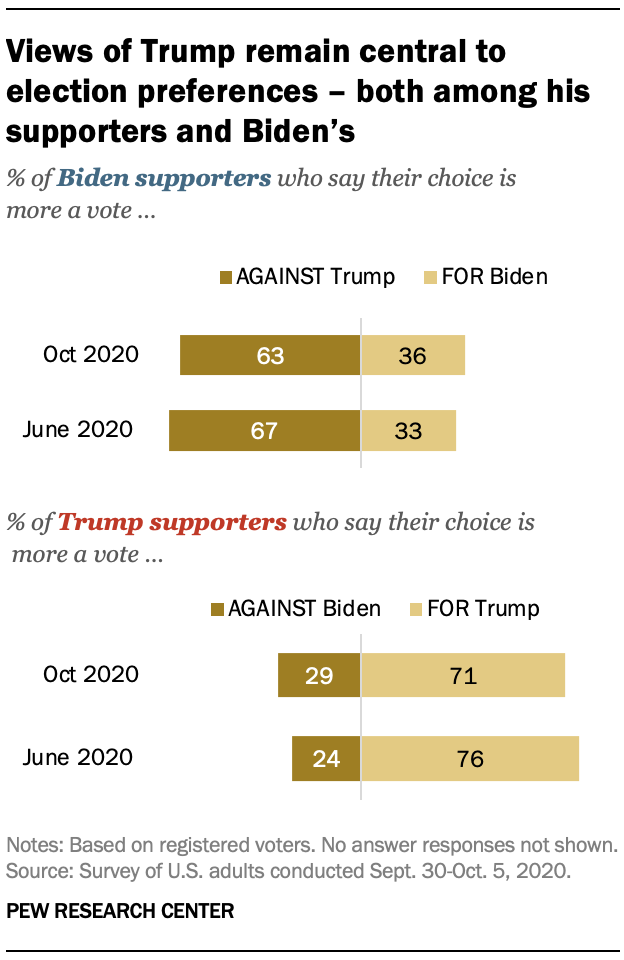 This dynamic is mostly unchanged since earlier this summer, though there has been modest movement among each coalition of voters. Today, Trump’s voters are slightly more likely to say their vote is against Biden (29% today vs. 24% then), while Biden’s voters are slightly less likely to say their choice is more a vote against Trump (67% then vs. 63% today).

As in June 2020, there remain sizable divides among Biden supporters in views of whether they see their vote more as for Biden or against Trump.

There is less variation in views among Trump voters, though Trump supporters under 50 years of age are slightly more likely than their older counterparts to say their vote is against Biden rather than for Trump.

In the final weeks leading up to Election Day, Biden holds a 10 percentage point lead over Trump among registered voters in the presidential race (52% Biden, 42% Trump). Many of the demographic patterns of support for both candidates are similar to those in the 2016 presidential contest.

Just as was the case four years ago, there is a sizable gender gap in candidate preference: Women voters continue to favor the Democratic candidate for president by 17 percentage points (55% to 39%). This is roughly on par with 2016.

In contrast, men are divided. Today, 49% favor Biden while 45% favor Trump. In 2016, men favored Trump by modest margins in preelection polls, as well as among validated 2016 voters.

There are also sizable gaps by race and ethnicity. White voters prefer Trump to Biden (51% vs. 44%, respectively), though Biden is faring slightly better among White voters in the current race relative to Hillary Clinton in 2016.

And the sizable Democratic advantages among Black, Hispanic and Asian American voters are just as large for Biden as they were in 2016. Biden currently leads Black voters by 81 percentage points, Hispanic voters by 34 points and Asian voters by 53 points. Note: Surveys are conducted in English and Spanish.

Younger voters are by far the most supportive of Biden when comparing voter preferences by age: Voters under 30 support Biden over Trump by 30 percentage points (59% vs. 29%, respectively). Voters ages 30 to 49 also prefer Biden to Trump by a 17-point margin. But voters 50 and older are far more divided: 48% say they currently support or lean toward Trump, while a nearly identical share say they support or lean toward Biden (49%). This marks a shift from 2016 – when Trump held a modest lead over Clinton among voters in these age groups. 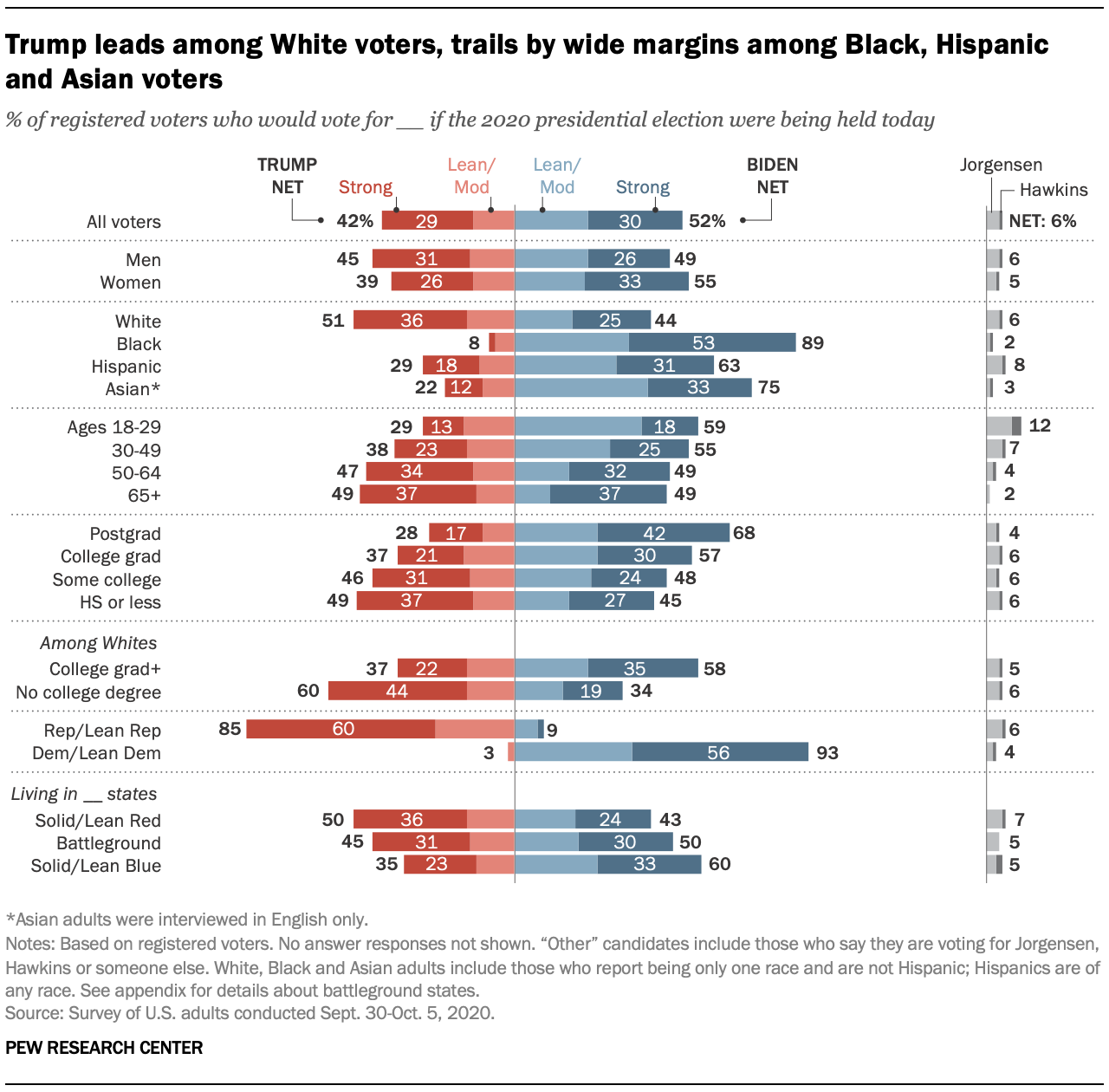 There continue to be large gaps in candidate preference by education. As in 2016, those with a college degree or more are more likely to support the Democratic candidate over Trump. Today, those with no college degree are slightly more divided: 47% say they would vote for Trump if the election were held today, while 46% say they would vote for Biden.

Education is also a dividing line among White voters: College-educated White voters favor Biden by 21 percentage points, while those without a college degree favor Trump by a similar margin.

Biden holds a wide lead in states viewed as likely to vote Democrat, or that lean Democratic (“blue” or “lean blue” states) in 2020. In these states, 60% of voters support Biden, while 35% favor Trump. Trump holds a narrow lead, 50% to 43%, in “red” or “red-leaning” states. Across nine states viewed as “battleground” states by election analysts – Arizona, Florida, Georgia, Iowa, Michigan, North Carolina, Ohio, Pennsylvania and Wisconsin – Biden holds a narrow edge (50% vs. 45%). (See Appendix for categorization of states.) 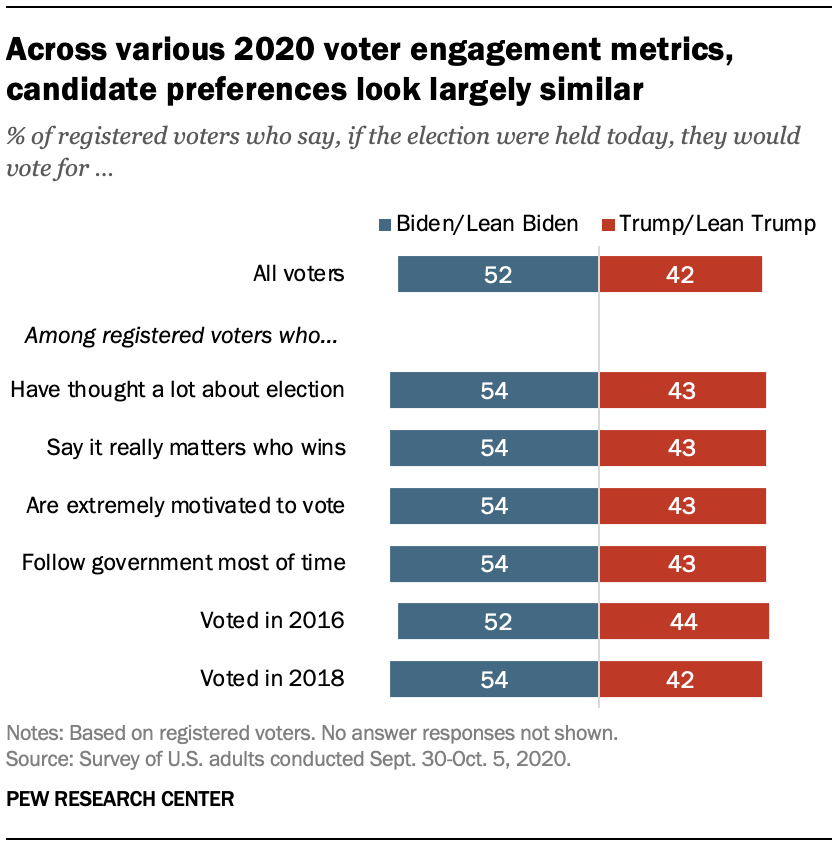 Just as Biden holds an advantage over Trump among all registered voters in the current survey, his lead over Trump looks similar across a variety of voter engagement metrics – ranging from about 8 to 12 percentage points.

Biden has a lead among voters who have thought “a lot” about the election (54% vs. 43%, respectively), as well as among those who say “it really matters” who wins the presidential election this November (54% vs. 43%). 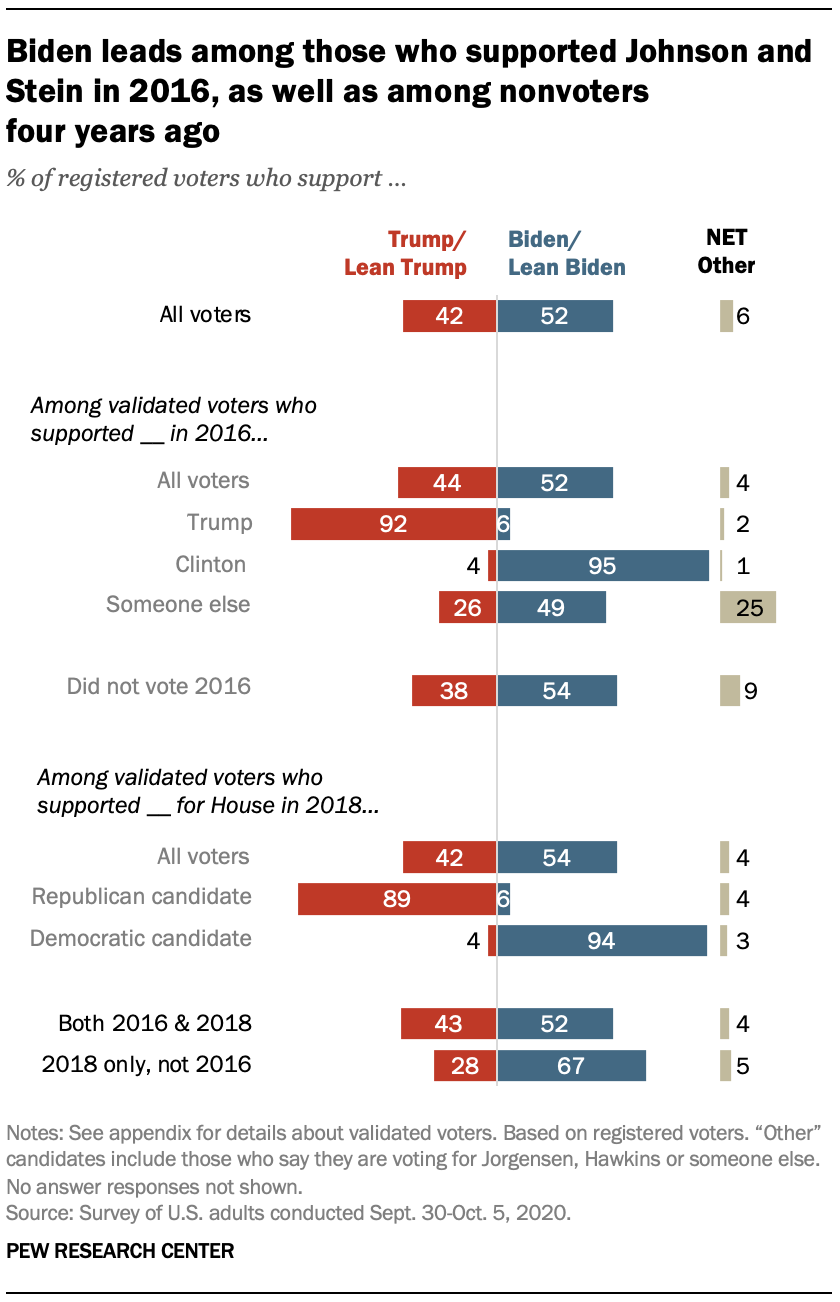 Trump and Biden mostly hold onto their party’s coalition of voters in 2016, though there are some modest differences: About 6% of Trump’s 2016 voters currently say they support or lean toward Biden for president, while 2% say they are supporting a third-party candidate.

Similarly, about 4% of validated Clinton voters say they prefer Trump for president this year; 1% say they are supporting a third-party candidate for president.

Among validated 2018 midterm voters – which shifted decidedly toward the Democratic Party compared with 2016 – Biden captures 54% of these voters, while Trump garners 42% support.

As voters consider how to cast their ballot in the 2020 election this fall, there are sizable gaps in vote preference by method of voting. 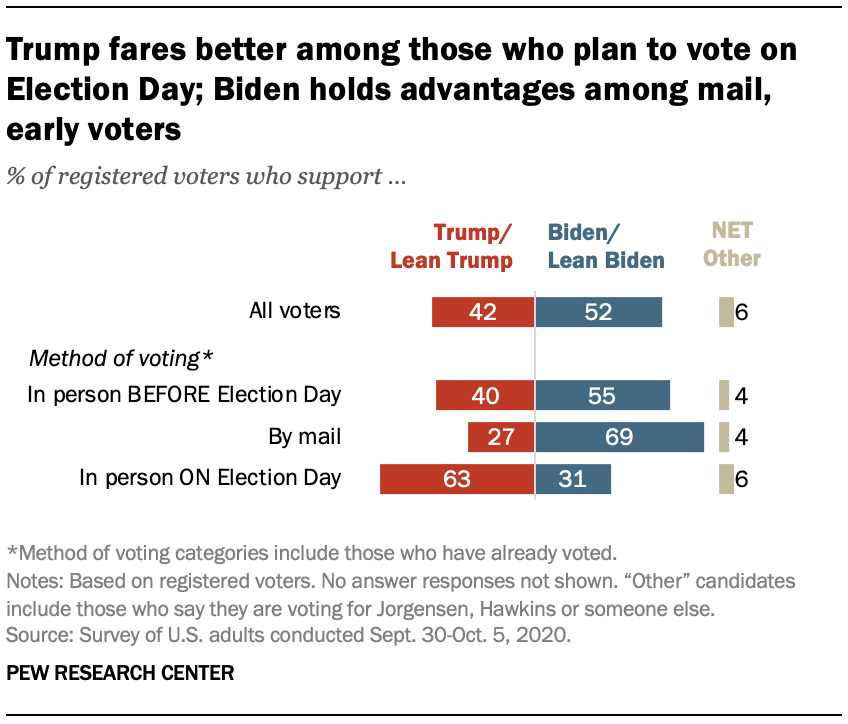 Biden’s advantage among absentee or mail voters is even larger: 69% of these voters say they plan to cast a ballot – or have already cast their ballot – for Biden. Only about a quarter say they plan to vote for Trump (27%). 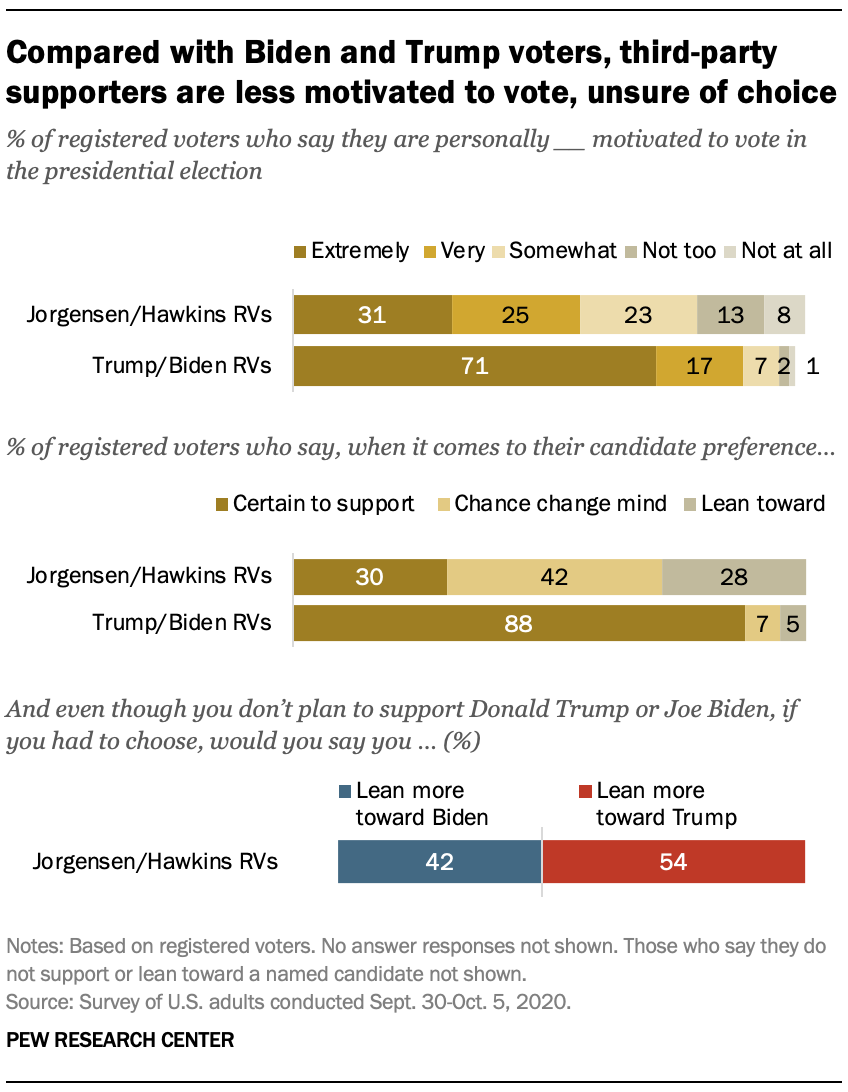 Third party candidates garner 5% support among registered voters – 4% say they support or lean toward Libertarian candidate Jo Jorgensen for president while 1% say they plan to support Green Party candidate Howie Hawkins. Additionally, 1% of voters say they do not plan to vote for any of the four candidates asked about on the survey.

Third-party supporters are also far less certain about their choice in vote: Three-in-ten Jorgensen and Hawkins supporters say they’re certain to vote for their preferred candidate, while 42% say there is a chance they might change their mind and about three-in-ten (28%) say they lean toward their choice. An overwhelming majority of Trump and Biden supporters (88%) say they are certain to vote for their preferred candidate.

Next: 2. Voters’ feelings about the election and possible outcomes
← Prev Page
Page1You are reading page2Page3Page4Page5Page6Page7Page8Page9
Next Page →

Amid Campaign Turmoil, Biden Holds Wide Leads on Coronavirus, Unifying the Country
1. The Trump-Biden presidential contest
Familiar demographic divides in vote preferencesVoter engagement and candidate preferencesBiden leads among 2016 validated votersThird-party supporters less motivated to vote than Biden, Trump voters
2. Voters’ feelings about the election and possible outcomes 3. Perceptions of Trump and Biden 4. Voter engagement and interest, voting by mail and in person 5. Views of the state of the nation and the U.S. economy Acknowledgments Appendix Methodology