Pew Research Center conducted this study to understand how Americans are continuing to respond to the coronavirus outbreak. For this analysis, we surveyed 11,001 U.S. adults in July and August 2020. Everyone who took part is a member of Pew Research Center’s American Trends Panel (ATP), an online survey panel that is recruited through national, random sampling of residential addresses. This way nearly all U.S. adults have a chance of selection. The survey is weighted to be representative of the U.S. adult population by gender, race, ethnicity, partisan affiliation, education and other categories. Read more about the ATP’s methodology. Here are the questions used for the report, along with responses, and its methodology.

With the U.S. economy reeling from the impact of the coronavirus, nearly three-quarters of Americans (73%) say the more effective way to help the economy recover is by significantly reducing the number of infections, so that more people feel comfortable going to stores, restaurants, schools and other workplaces. Only about a quarter (26%) say the more effective path to recovery is to reopen businesses and schools even if there hasn’t been a significant decline in infections. (For more, see “Republicans, Democrats differ over factors K-12 schools should consider in deciding whether to reopen”)

The new national survey by Pew Research Center, conducted July 27-Aug. 2 among 11,001 adults on the Center’s American Trends Panel, finds broadly negative assessments of the overall U.S. response to the coronavirus outbreak – and increasingly critical evaluations of how Donald Trump, state and local government officials and public health officials have dealt with the crisis. 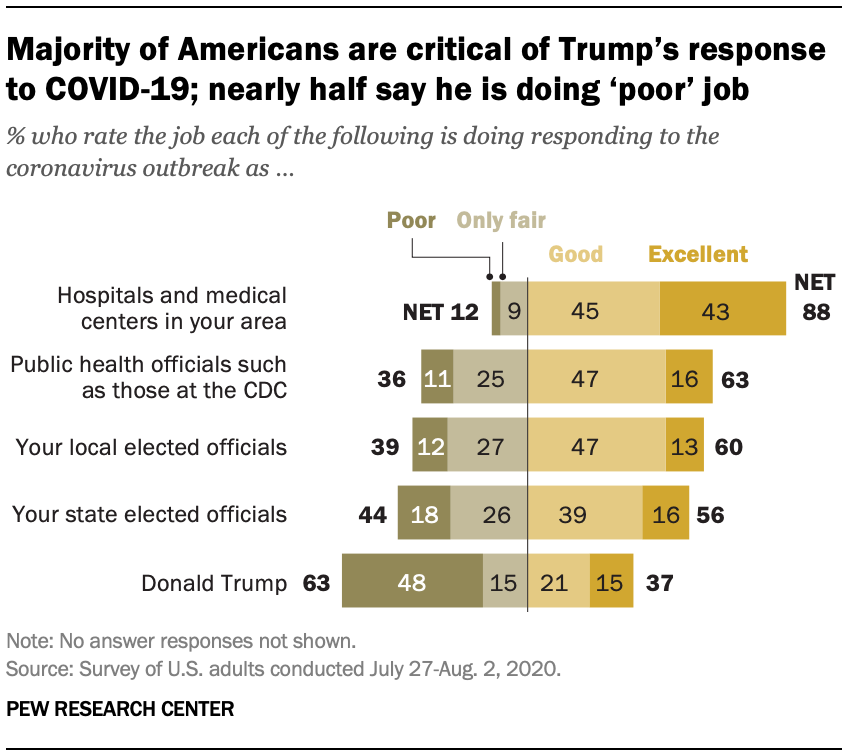 These views have changed only modestly since May, when 41% gave him positive ratings, but the share saying he is doing an excellent or good job with the coronavirus has declined 11 percentage points, from 48%, since late March. Nearly half of Americans (48%) currently rate Trump’s response to the outbreak as “poor,” up 16 points since March.

Positive evaluations of how state (from 70% to 56%) and local government officials (from 69% to 60%) are responding to the coronavirus outbreak have also declined since March. However, the public continues to express overwhelmingly positive views of the response of local hospital and medical centers (88% rate them as excellent or good), which are unchanged over the past few months. 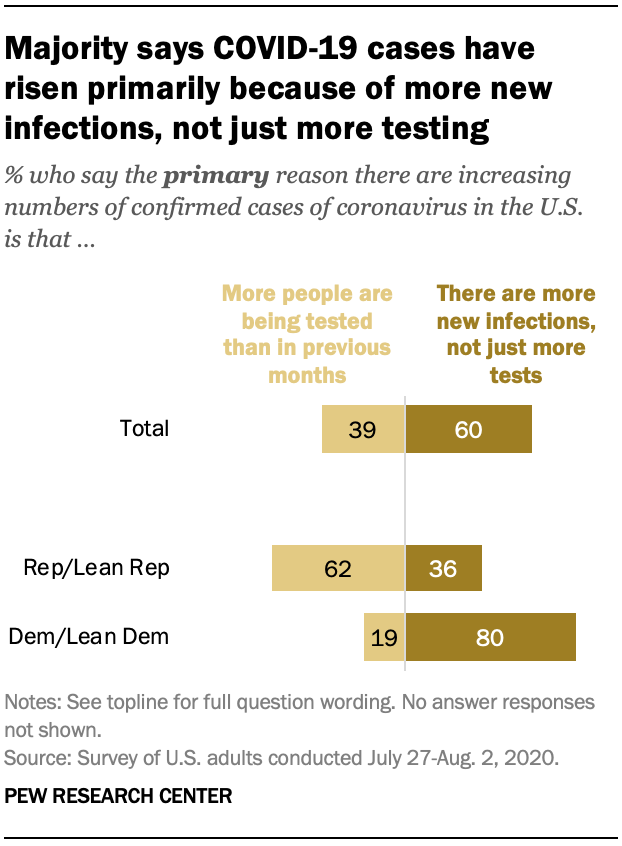 The survey finds that a majority of Americans (60%) say the primary reason that the number of confirmed coronavirus cases is increasing is because there are more new infections, not just more testing for the disease. About four-in-ten (39%) say cases are rising primarily because more people are being tested than in previous months.

Democrats overwhelmingly attribute the rise in coronavirus cases primarily to more infections, not just more testing (80% say this). A smaller majority of Republicans (62%) say the primary reason is because more people are being tested.

While most Americans express concern that states have been too quick to lift COVID-19 restrictions, three-quarters say a major reason the coronavirus outbreak has continued is that too few people are abiding by guidelines about social distancing and mask-wearing. A smaller majority (58%) says that lifting restrictions too quickly in some places is a major reason for the continued outbreak.

About half of Americans (53%) say an inadequate response by the federal government is a major reason the outbreak has continued, while nearly as many (49%) cite a lack of timely testing. Smaller shares point to unclear instructions about how to prevent the spread of the coronavirus (40%) and that it is not possible to do much to control its spread (28%) as major reasons.

Democrats are more likely than Republicans to say most of these factors are major reasons the outbreak has continued. The widest partisan differences are on whether the federal government response is inadequate – 82% of Democrats view this as a major reason the outbreak has continued, compared with 21% of Republicans – and lifting COVID-19 restrictions too quickly (82% of Democrats, 31% of Republicans). 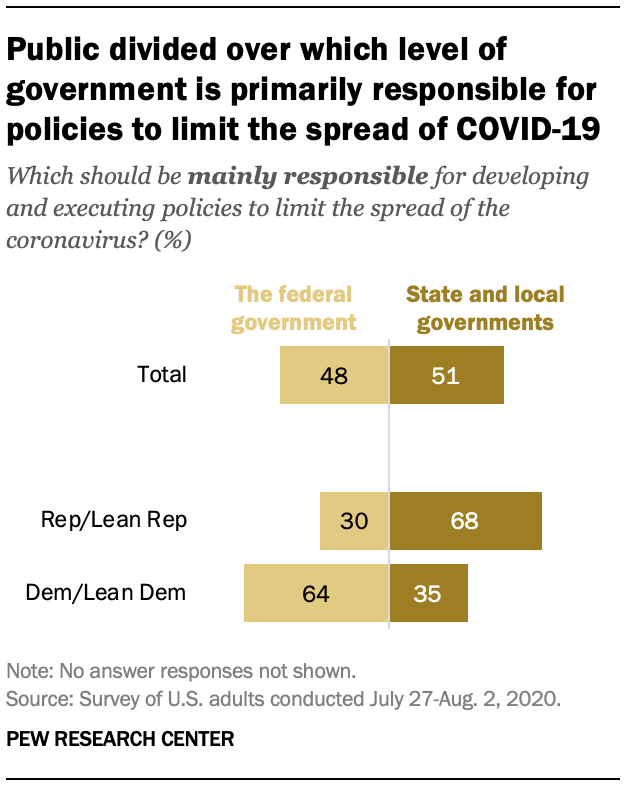 Republicans and Democrats also have very different attitudes on a fundamental issue related to the nation’s efforts to address the coronavirus outbreak: whether the federal government or state and local governments are primarily responsible for developing and executing policies to limit the spread of the disease.

The public overall is almost evenly divided: 51% say this responsibility rests mostly with states, while 48% say the federal government should be primarily responsible. Partisans express contrasting views: While 68% of Republicans say state and local governments should be primarily responsible for developing and implementing policies to limit the spread of the coronavirus, 64% of Democrats say the federal government bears most of the responsibility.

Next: 1. Public assessments of the U.S. coronavirus outbreak
← Prev Page
You are reading page1Page2Page3Page4Page5Page6
Next Page →