In addition, Donald Trump gets lower ratings for his response to the outbreak than he did in March. Trump’s overall job approval also is lower than in March, though it is effectively unchanged since June. 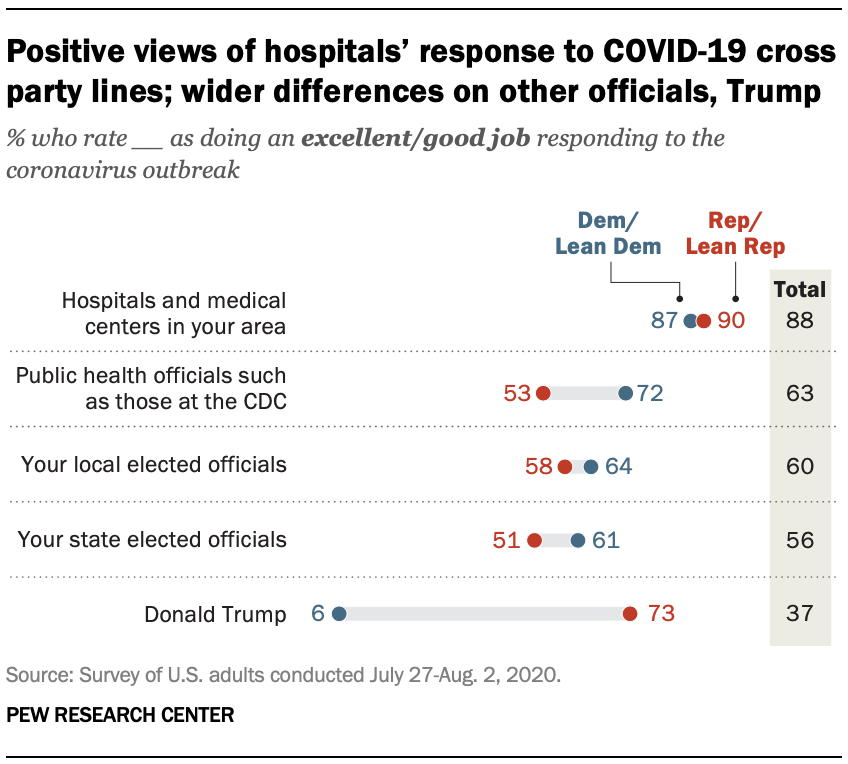 A large majority of Americans (88%) – and similarly high shares of Republicans and Democrats alike – say hospitals and medical centers in their area are doing an excellent or good job in responding to the coronavirus outbreak.

There are much wider partisan differences in views of how public health officials, such as those with the CDC, are responding to the outbreak. Currently, 72% of Democrats and those who lean to the party say public health officials are doing well in responding to the coronavirus, compared with about half of Republicans and Republican leaners (53%).

Democrats also are more likely than Republicans to give positive ratings to their state and local government officials for how they have responded to the coronavirus outbreak. 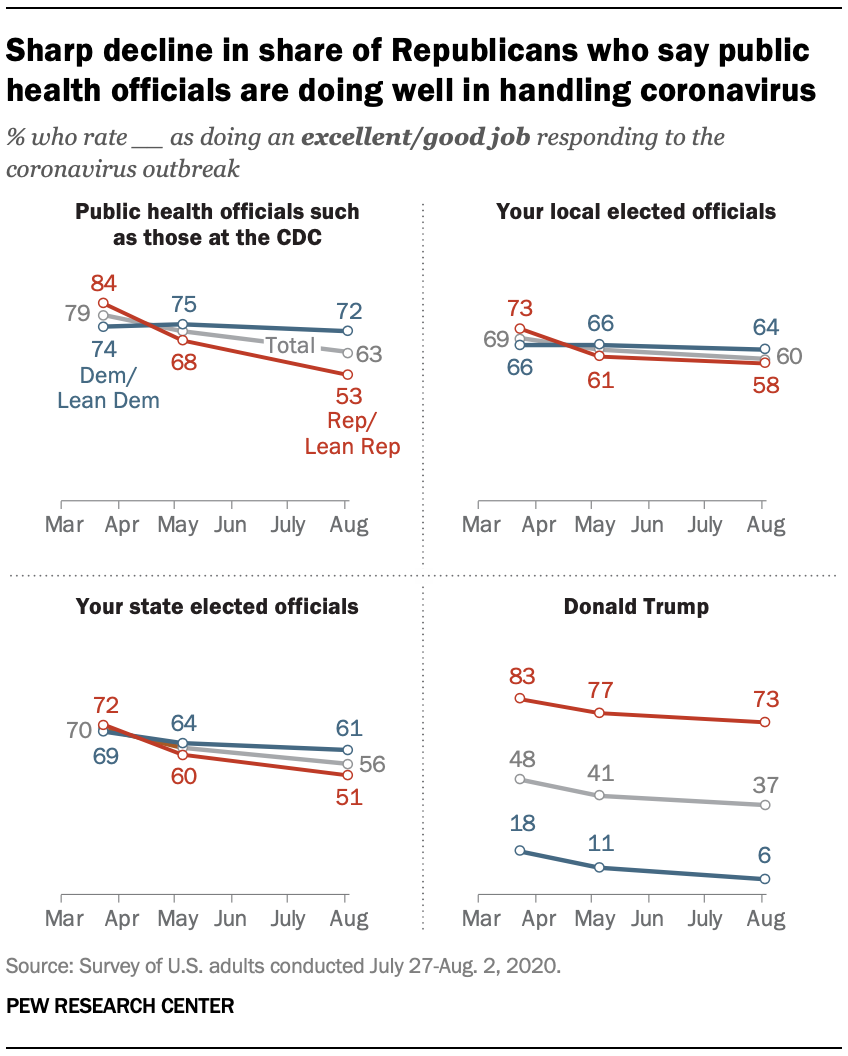 Trump’s rating from the U.S. public overall for his response to the coronavirus has declined 11 percentage points since March, from 48% to 37%. The declines have been comparable among Republicans and Democrats.

The public also is less positive about how public health officials are responding to the coronavirus, with virtually all of the decline in positive assessments coming among Republicans.

The share of the public that says public health officials such as those at the CDC are doing an excellent or good job has decreased 16 percentage points since March (from 79% to 63% today).

Since then, the share of Republicans who rate public health officials positively has fallen 31 points, from 84% to 53%. Democrats’ views are largely unchanged over that time period (74% in March, 72% today).

By contrast, the public’s views of local hospitals and medical centers’ response to the outbreak are unchanged since May, when 88% said they were doing an excellent or good job (this question was not asked in March).

Trump approval lower than in March, virtually unchanged since June

Currently, 38% of Americans approve of Donald Trump’s performance as president, while 59% disapprove. Trump’s job rating is virtually unchanged since June (39% approved), though it is lower than in March (45%) or April (44%).

Views of Trump’s job performance continue to be deeply divided along partisan lines. Among Republicans and Republican leaners, 77% currently say they approve of Trump’s performance; only 5% of Democrats and Democratic leaners say the same. 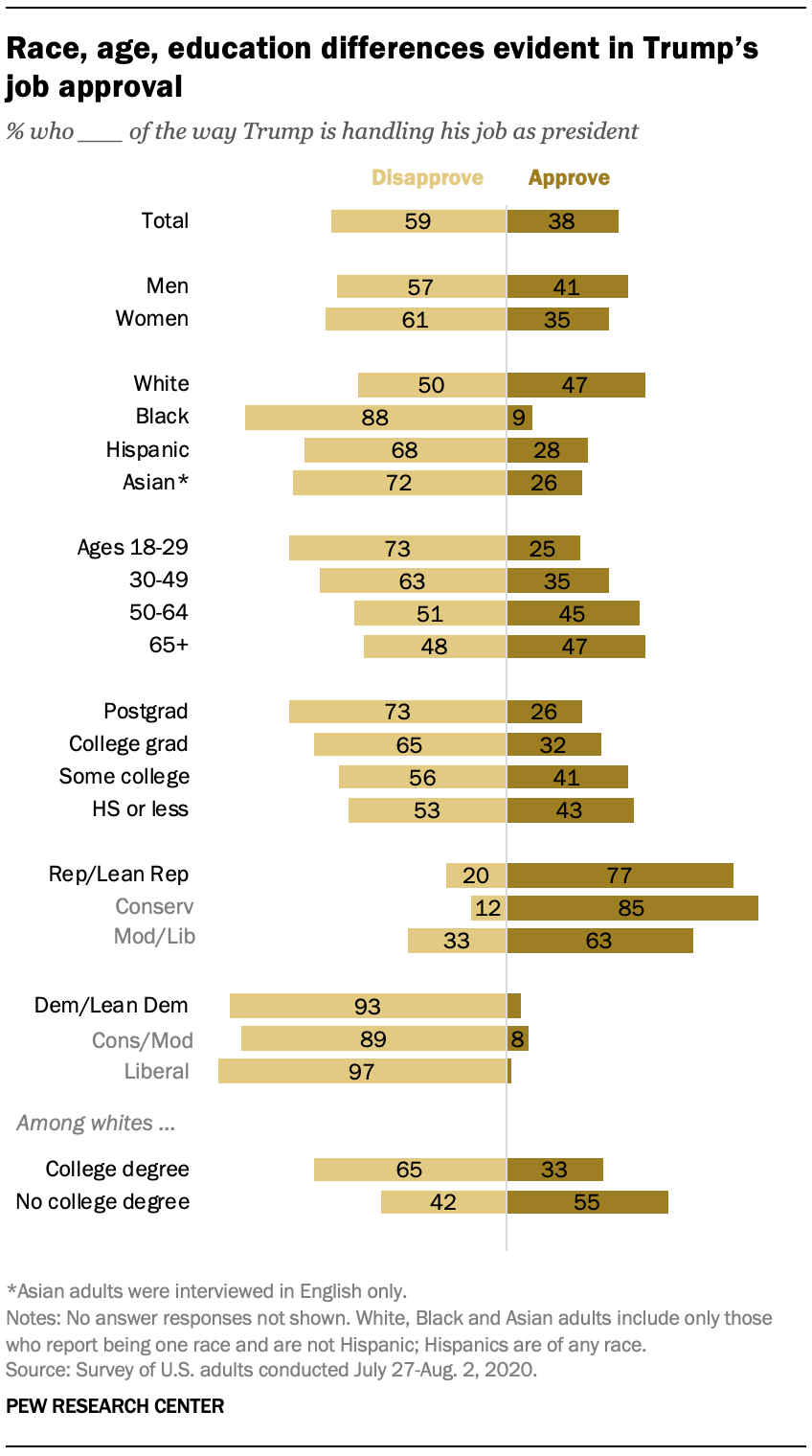 In addition, there continue to be substantial differences across demographic and educational groups in views of Trump’s performance.

White non-Hispanic adults are roughly split in their views: 47% say that they approve of Trump’s handling of his job as president, while 50% say they disapprove.

Similar shares of Hispanic (68%) and Asian Americans (72%) say they disapprove of Trump’s performance, while an overwhelming majority of Black adults say the same (88%).

As has long been the case, Trump draws much higher job approval ratings among white adults who have not completed college (55% approve) than among those with a four-year degree (33%).