The eight typology groups fall into four Republican-leaning groups and four Democratic-leaning groups. While each group has a partisan orientation, there are substantial intraparty divides in how these groups view the parties, the president and other political figures.

In the GOP coalition, Market Skeptic Republicans and New Era Enterprisers offer some criticism of the Republican Party and of Donald Trump, while Core Conservatives and Country First Conservatives tend to offer more positive evaluations of both.

The divides are less pronounced among Democratic-leaning groups – particularly in their evaluations of Trump. Still, Devout and Diverse diverge from the other groups in the coalition by expressing less negative views of Trump and less positive views of the Democratic Party.

Within partisan coalitions, some differences in views of the parties 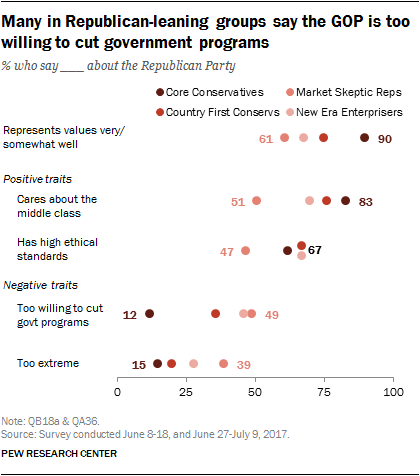 Core Conservatives express the most positive attitudes about the Republican Party of any typology group. Among the other GOP-oriented groups, Market Skeptic Republicans offer the least positive assessments of the party.

Overall, 90% of Core Conservatives say the Republican Party represents their values very or somewhat well, along with 75% of Country First Conservatives. A smaller majority (61%) of Market Skeptic Republicans say this.

Only about half (51%) of Market Skeptic Republicans say the GOP cares about the middle class, compared with no less than seven-in-ten of those in other Republican-oriented groups.

While only 12% of Core Conservatives say that the Republican Party is too willing to cut government programs even when they have proven effective, the share saying this rises among other groups in the GOP coalition: 36% of Country First Conservatives say this, along with 46% of New Era Enterprisers and 49% of Market Skeptic Republicans. 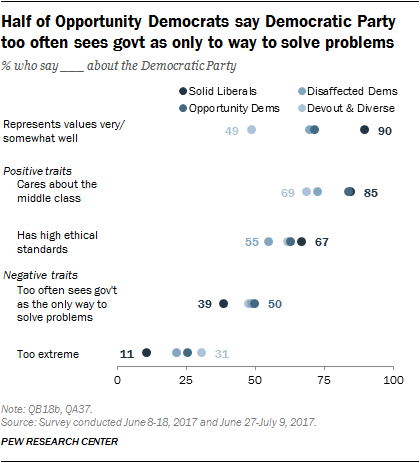 Among Democratic-leaning groups, Solid Liberals are the most likely to say their values are at least somewhat well represented by the Democratic Party (90%).

On the other hand, only about half (49%) of Devout and Diverse feel similarly. About seven-in-ten of both Opportunity Democrats and Disaffected Democrats (72% and 70%, respectively) feel that the Democratic Party represents their values at least somewhat well.

While the criticism that the GOP is too willing to cut government programs has little resonance among Core Conservatives, 39% of Solid Liberals say the Democratic Party “too often sees government as the only way to solve problems.”

Market Skeptic Republicans stand out for their criticisms of both parties 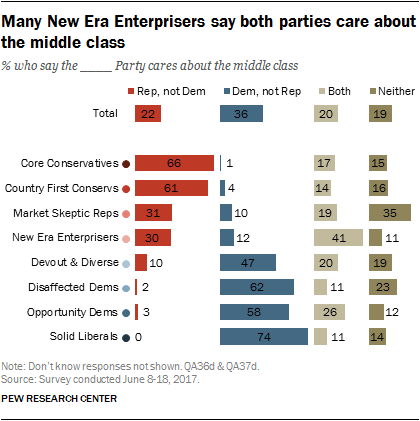 While Market Skeptic Republicans generally say the GOP represents their values at least somewhat well, they stand out for their criticism of both political parties when it comes to caring about the middle class.

Nearly a third of Market Skeptic Republicans (31%) say the Republican Party cares about the middle class and the Democratic Party does not, while just 10% say the reverse.

How the typology groups see Trump 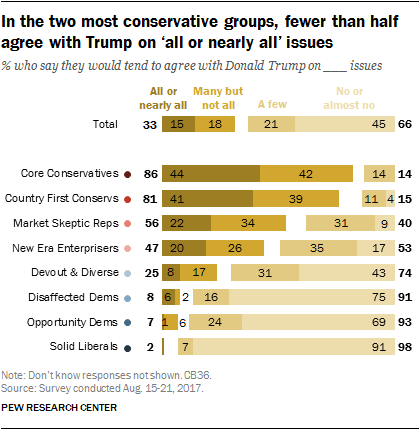 Among Democratic-leaning groups, more than nine-in-ten Solid Liberals (98%), Opportunity Democrats (93%) and Disaffected Democrats (91%) say they agree with Trump on only a few or no issues. A smaller – though still clear – majority of Devout and Diverse (74%) also say this.

In general, just 16% of the public likes the way that Trump conducts himself as president, while an additional 25% say they have mixed feelings and 58% do not like his conduct. 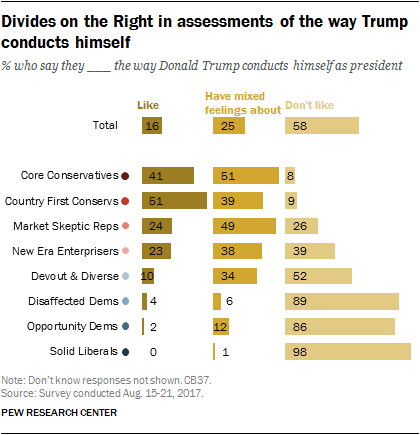 Trump receives his highest marks on this score from the two conservative groups: 51% of Country First Conservatives and 41% of Core Conservatives say they like Trump’s conduct, while only about a quarter in the other Republican-oriented groups say this. Among Market Skeptic Republicans, about half (49%) say they have mixed feelings about Trump’s conduct as president, while 26% say they dislike it. The share of New Era Enterprisers expressing dislike of Trump’s conduct is even higher (39%). 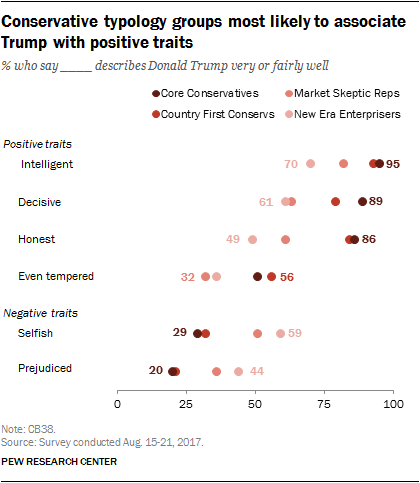 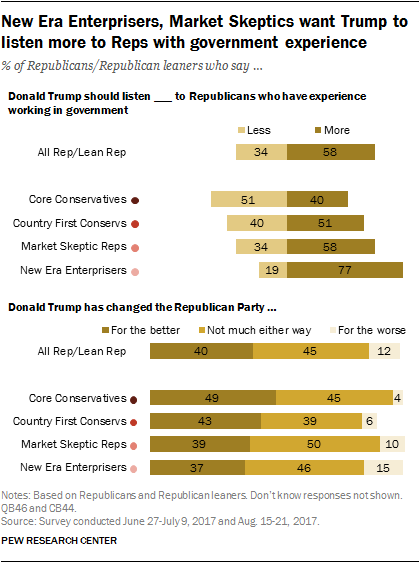 And while 86% of Core Conservatives and a similar share of Country First Conservatives (84%) say Trump is described very or fairly well as “honest,” that falls to a smaller majority (61%) among Market Skeptic Republicans and only about half (49%) for New Era Enterprisers.

A similar pattern is seen on negative traits. For example, about six-in-ten New Era Enterprisers (59%) and roughly half of Market Skeptic Republicans (51%) say “selfish” describes Trump at least fairly well, compared with only about a third of those in the two most conservative groups.

Donald Trump receives his most favorable ratings from Core Conservatives and Country First Conservatives: Roughly nine-in-ten in both groups view him favorably. Smaller majorities of Market Skeptic Republicans and New Era Enterprisers (64% and 62%, respectively) give him positive ratings. 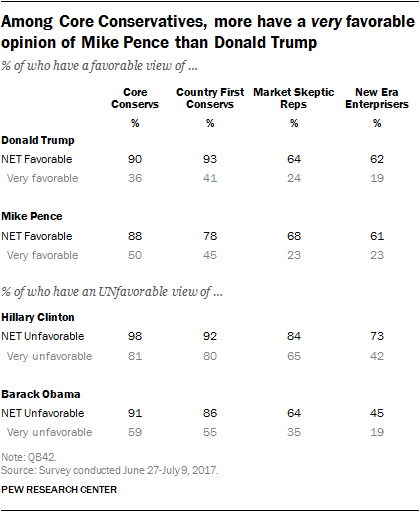 Overall, Vice President Mike Pence’s ratings among GOP-leaning groups roughly mirror Trump’s. However, Core Conservatives are more likely to be very favorable in their ratings of Pence than of Trump (50% rate Pence very favorably; 36% give Trump the same rating).

Across all four GOP-leaning typology groups, wide majorities express negative views of Hillary Clinton. And among the less conservative GOP groups, far more rate Clinton negatively than rate Trump positively. For example, while 64% of Market Skeptic Republicans have a favorable view of Trump, fully 84% have an unfavorable view of Clinton, including 65% who express a very unfavorable view for the former Democratic presidential nominee. 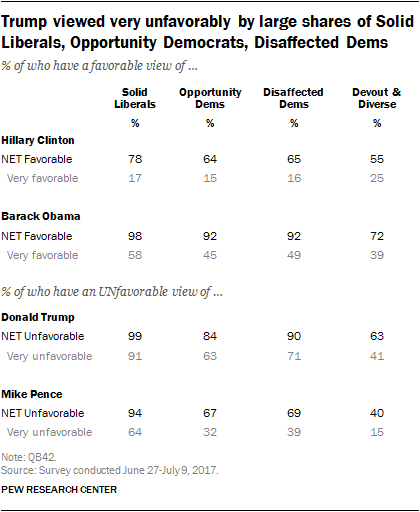 Barack Obama is also viewed unfavorably among most GOP groups, though views of the former president are less negative than views of Clinton. Among New Era Enterprisers, about as many have a favorable (51%) as unfavorable (45%) opinion of Obama.

Majorities across all Democratic-oriented groups express favorable views of both Obama and Clinton. However, across all groups, substantially larger shares view Obama positively than view Clinton positively.

A narrower 63% majority of Devout and Diverse view Trump unfavorably.

Partisanship on a personal level 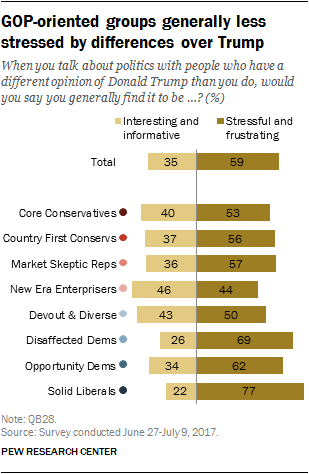 About six-in-ten Americans overall (59%) say that talking about politics with people who have different views of Donald Trump than they do is “stressful and frustrating.” A smaller share (35%) says that these conversations are “interesting and informative.”

On average, Democratic-oriented groups are more likely than Republican-oriented groups to say that discussing politics with people who have different opinions about the current Republican president are stressful and frustrating, with Solid Liberals particularly likely to say this.

The only typology groups where opinion is relatively evenly split are New Era Enterprisers (46% interesting and informative, 44% stressful and frustrating) and Devout and Diverse (43% vs. 50%). Compared with other groups, these groups stand out for their relatively low levels of political engagement. 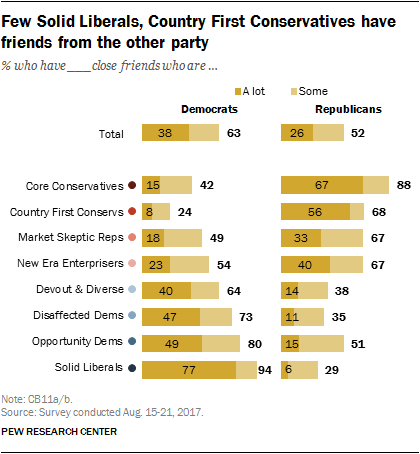 In general, people tend to have more friends who share their partisan orientation than friends who do not, and this dynamic is seen across typology groups.

New Era Enterprisers and Market Skeptic Republicans are slightly more likely than Core Conservatives to have Democratic friends, though this partly reflects the partisan composition of these groups (11% of Market Skeptic Republicans and 21% of New Era Enterprisers are Democrats or lean Democratic, compared with negligible shares of the conservative groups). 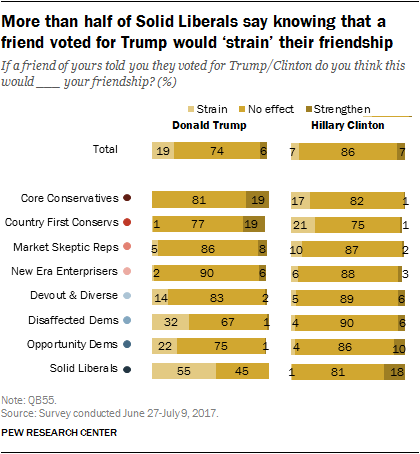 Solid Liberals are particularly likely to say that a friendship would be strained if someone voted for Trump: 55% say this, along with 32% of Disaffected Democrats and smaller shares of other Democratic-leaning groups.

Next: 3. Views of life in the country today, U.S. global standing
← Prev Page
Page1Page2You are reading page3Page4Page5Page6Page7Page8Page9Page10
Next Page →

Political Typology Reveals Deep Fissures on the Right and Left 1. Partisanship and political engagement
2. Views of the parties and political figures
Within partisan coalitions, some differences in views of the partiesMarket Skeptic Republicans stand out for their criticisms of both partiesHow the typology groups see TrumpFavorability of leading political figuresPartisanship on a personal level
3. Views of life in the country today, U.S. global standing 4. Government’s role and performance, views of national institutions, expertise 5. Views of the economy and the social safety net 6. Race and discrimination, opinions about immigrants and Islam 7. Foreign policy 8. Environmental attitudes 9. Views on religion and social issues 10. Financial well-being, personal characteristics and lifestyles of the political typology Appendix 1: Typology Group Profiles Appendix 2: About the Political Typology Methodology