As Republicans and Democrats have moved further apart on political values and issues, there has been an accompanying increase in the level of negative sentiment that they direct toward the opposing party. Partisans have long held unfavorable views of the other party, but negative opinions are now more widely held and intensely felt than in the past.

Among members of both parties, the shares with very unfavorable opinions of the other party have more than doubled since 1994.

In addition, the friend networks of both Republicans and Democrats are dominated by members of their own party and include few members of the other party.

And while opinions of Donald Trump have been deeply polarized along partisan lines since well before he was elected president, the partisan gap in his job approval ratings – based on surveys conducted earlier this year – is larger than for any president in six decades.

More negative views of the opposing party – and its members

As noted in the Center’s 2014 study of political polarization, Republicans and Democrats have long had negative opinions of the other party. But in the past, more partisans had mostly unfavorable views than very unfavorable views.

Partisans’ close friends tend to be like them politically

Republicans and Democrats both say their friend networks are predominantly made up of people who are like-minded politically. 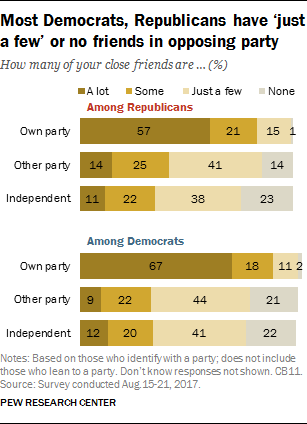 Even fewer Democrats (31%) have at least some friends who are Republicans. About two-thirds of Democrats (64%) have just a few or no Republican friends.

Partisan differences extend even to the type of community in which people prefer to live. Most Republicans favor a community that features more space, even if amenities are farther away. Democrats, by contrast, express a preference for a community where houses are smaller and closer together but amenities are nearby. 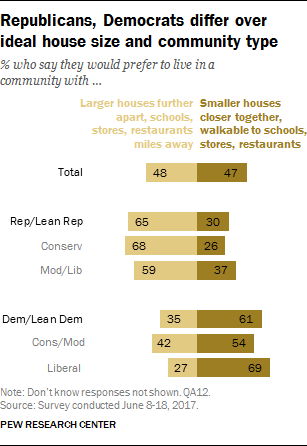 Views among Democrats and Democratic-leaning independents are almost the reverse: By 61% to 35%, more say they would prefer a community with smaller houses close to one another that has amenities nearby. Liberal Democrats (69% to 27%) express a preference for this community type by a greater margin than conservative and moderate Democrats (54% to 42%).

While partisans increasingly express highly negative views of the other political party, most Republicans and Democrats say the reason they affiliate with the political party of their choice is more because they are for what it represents rather than against what the other party stands for.

However, among both the Republican and Democratic coalitions, those who identify with a party are much more likely than those who lean to a party to say their identity is influenced by support for their own party. By 65% to 31%, Democratic identifiers say they consider themselves Democrats more because they are for what their party represents than against the Republican Party. By contrast, 56% of independents who lean toward the Democratic Party say their affiliation has more to do with being against the Republican Party; 41% say it’s more about being for the Democratic Party. Among those who affiliate with the Republican Party, 59% of identifiers, compared with 45% of leaners, say they affiliate with the GOP more because of what the party represents. (For more on the roots of partisanship, see “Partisanship and Political Animosity in 2016.”) 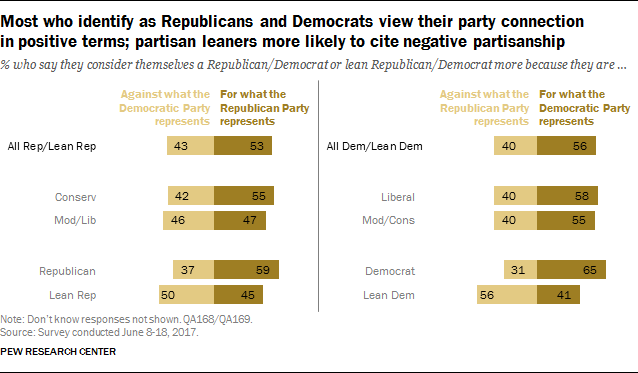 Republicans and Democrats differ on views of compromise 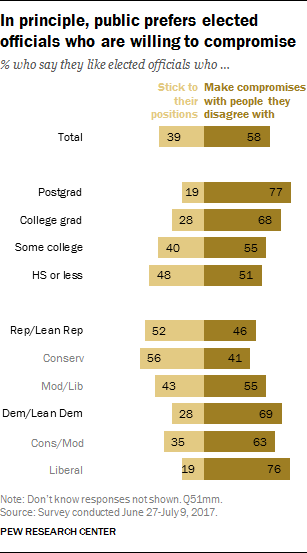 About seven-in-ten Democrats and Democratic leaners (69%) say they like elected officials who compromise. Liberal Democrats (76%) are more likely to hold this view than conservatives and moderates (63%).

While there are mostly positive views of elected officials who make compromises in principle, previous research has shown that liberals and conservatives favor political compromises in which their side gets most of what of it wants to solutions that “split the difference” between their side and the opposition. 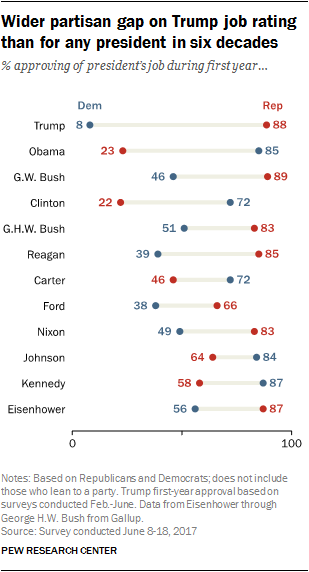 In three surveys conducted in February, April and June, 88% of Republicans, on average, approved of his job performance. By contrast, just 8% of Democrats approved.

The historic partisan gap in Trump’s job ratings is in large part because of his unusually low ratings among Democrats. Trump has the lowest approval marks from the opposing party of any president in the past six decades.

Even before Trump took office, there had been a downward trend in presidential approval ratings among members of the party not in control of the White House. The previous lows were during the presidencies of Bill Clinton, whose average rating among Republicans was just 22% during his first year in office, and Barack Obama (23%). George W. Bush was an exception to this trend in his first year (46% average job rating among Democrats), largely because of his extraordinarily high level of support after the 9/11 attacks. Across his two terms, Bush’s average rating among Democrats was just 23%, the lowest of any president among members of the opposition party except Obama (14%).

Trump’s first-year job ratings among members of his own party have been on par with many recent presidents, including Obama and Bush. Among presidents since Eisenhower, Clinton (72%), Jimmy Carter (also 72%) and Gerald Ford (66%) were the only ones to receive job ratings below 80% from members of their own party during their first years in office.

Trump’s impact on the Republican Party 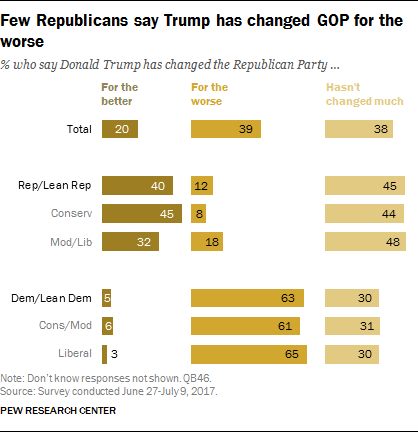 Democrats have a highly negative view of Trump’s impact on the GOP. Overall, 63% of Democrats and Democratic leaners say Trump has changed the Republican Party for the worse; 30% say he hasn’t changed the party much, and just 5% say he has changed it for the better. There is little difference between the views of liberal Democrats and conservative and moderate Democrats on this question.

Correction: The labels at the top of the chart “Wider partisan gap on Trump job rating than for any president in six decades” have been updated to exclude independents who lean Democratic or Republican. The numbers have not changed.

In polarized era, fewer Americans hold a mix of conservative and liberal views