The public continues to view the economic system as unfair to most Americans, while a substantial majority regards economic inequality as either a very big or moderately big problem.

As has been the case for the past two decades, most Americans say it is possible to get ahead through hard work, though Democrats have become increasingly skeptical that hard work can guarantee success.

There has been little change as well in public attitudes about corporate profits, with a majority of Americans viewing profits as excessive.

And as Congress begins to consider proposals for reforming the tax system, the survey finds little support for reducing taxes on high-income households or large businesses and corporations. Far more Americans favor increasing than lowering taxes on both.

Most see economic system as unfair

Americans are broadly skeptical of the fairness of the U.S. economic system. About two-thirds (65%) say the economic system in this country unfairly favors powerful interests, while 32% say the system is generally fair to most Americans. 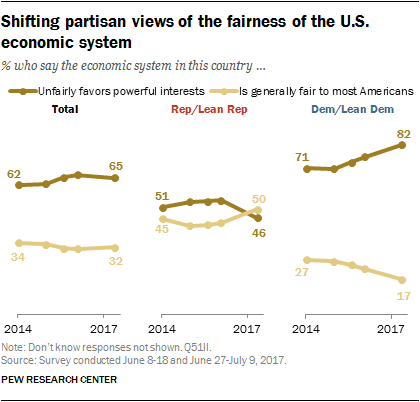 These views have changed little since the question was first asked in 2014, but partisan differences have widened.

Democrats and Democratic-leaning independents overwhelmingly see the economic system in this country as unfair: 82% say this, while just 17% think it treats most people fairly. The share of Democrats who say the economic system is unfair has grown 11 percentage points over the past three years.

By contrast, Republicans and Republican leaners are roughly divided in their views of the U.S. economic system: 50% say it is generally fair to most Americans, while nearly as many (46%) say it unfairly favors powerful interests. In recent years, including as recently as March 2016, somewhat more Republicans said the economic system unfairly favored the powerful than said it generally treated most people fairly (54% vs. 44%).

By 55% to 42%, conservative Republicans say the U.S. economic system is generally fair to most Americans. Moderate and liberal Republicans tilt in the opposite direction: 55% say the system unfairly favors powerful interests, while fewer (42%) say it’s generally fair. Among Democrats, liberals (88%) are somewhat more likely than moderates and conservatives (77%) to say the U.S. economic system is unfair.

Along with skepticism about the fairness of the economic system, most Americans view economic inequality as a problem in the country. 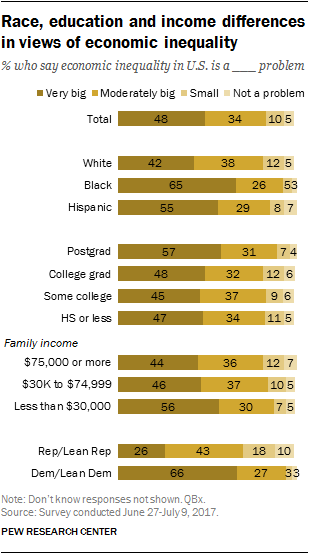 Overall, 48% say economic inequality is a “very big” problem in the country and another 34% say it is a “moderately big” problem. Relatively few say it is a small problem (10%) or not a problem at all (5%).

Blacks (65%) and Hispanics (55%) are more likely than whites (42%) to see economic inequality as a very big problem in the country.

Across levels of family income, 56% of those living in households earning less than $30,000 a year say economic inequality is a very big problem. Somewhat fewer of those in households with higher incomes say the same. 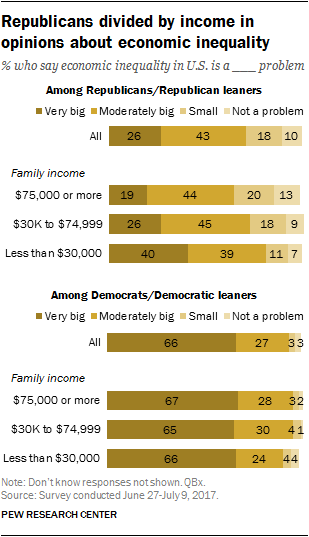 Within the GOP, there also are differences in views by levels of family income. Republicans earning less than $30,000 a year (40%) are much more likely than those with higher incomes (22%) to view economic inequality as a very big problem in the country. Among Democrats, there is little difference in views across income levels.

Most Americans continue to say hard work leads to success

While Americans see economic inequality as a problem and have doubts about the fairness of the economic system, they maintain a fundamental belief in the ability to succeed through hard work.

Since 1994, Republicans and Republican leaners have been consistently more likely than Democrats and Democratic leaners to say people can get ahead through hard work. But the gap has widened in recent years, as the share of Democrats who see hard work as a guarantee of success has declined.

Through the 1990s and 2000s, majorities of Democrats said hard work leads to success for most people, but that figure dipped to 48% in late 2011. Since then, Democrats’ views have fluctuated; today, 49% say most people can get ahead through hard work.

By contrast, for the past two decades about 70% or more Republicans have consistently said hard work leads to success.

Among Democrats, whites are more skeptical than either blacks or Hispanics that hard work leads to success. And while 57% of Democrats with at least a four-year degree say hard work is no guarantee of success for most people, fewer Democrats (45%) with less education say this. 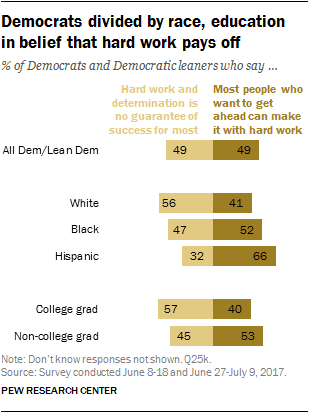 Large majorities of Republicans with four-year degrees (82%) and those who have not completed college (76%) say most people can get ahead with hard work.

The public holds a critical view of corporate profits. Overall, 59% say that business corporations make too much profit, compared with 36% who say most corporations make a fair and reasonable amount of profit.

Among Republicans, those with lower levels of income and education are more critical of corporate profits than those with higher incomes and more education.

Similarly, by roughly two-to-one (65% to 30%) Republicans with a college degree say corporations make a fair profit. Among Republicans without a college degree, views on corporate profits are split (47% too much profit, 47% reasonable profit). Majorities of Democrats across levels of income and education say business corporations make too much profit.

Americans are somewhat less supportive of raising taxes on those with household incomes over $250,000: 43% say taxes on high incomes should be raised (by a lot or a little), 24% say they should be lowered and 29% think they should be kept the same as they are now. 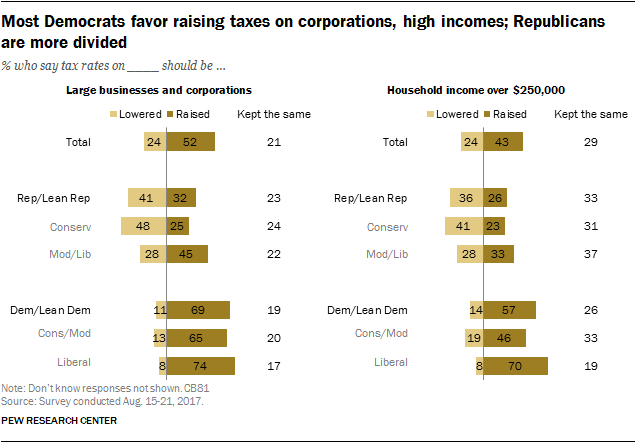 Most Democrats (57%) say taxes on household incomes of more than $250,000 should be raised, but this attracts much more support from liberal Democrats (70%) than from conservative and moderate Democrats (46%).