Why do people choose to identify as a Republican or a Democrat? For Republicans, about as many (68%) cite as a major reason the harm that Democratic policies inflict on the country as cite the beneficial impact of GOP policies (64%).

For members of both parties, other factors rank far behind the parties’ policies among reasons for choosing a party. Roughly four-in-ten Democrats (41%) and Republicans (38%) say a major reason for identifying with their party is that they “have a lot in common” with the people who belong to the parties. Fewer people – 31% of Democrats and 26% of Republicans – say the lack of common ground with members of the opposing party is a main reason why they are a Democrat or Republican. 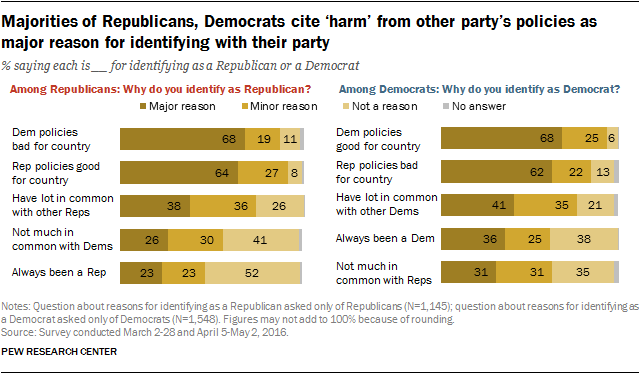 For independents who lean to the Republican and Democratic parties, the main motivation for leaning to their party is the harm that the opposing party’s policies cause the country.

When asked why they lean but do not identify with their party, about half of Republican leaners (52%) cite frustration with GOP leaders as a major reason; another 40% say they disagree with the party on some important issues.

These factors are cited less frequently by Democratic leaners: Just 28% say frustration with the Democratic Party’s leaders is a major reason they do not identify as Democrats, and 33% cite disagreements on key issues as a major reason. 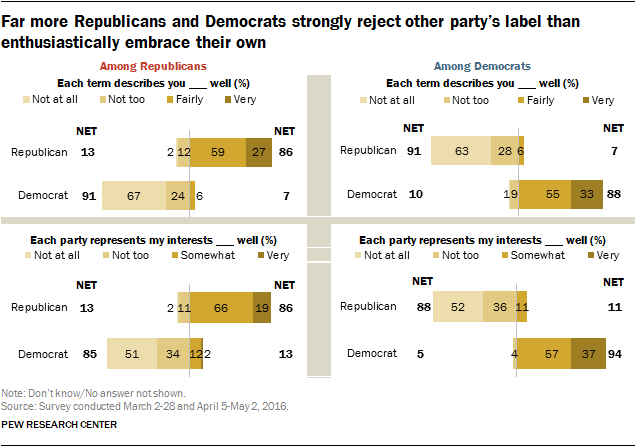 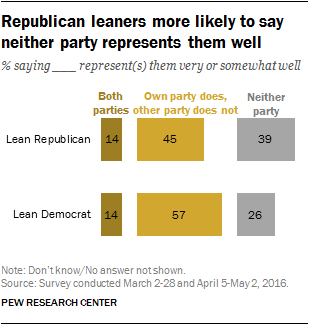 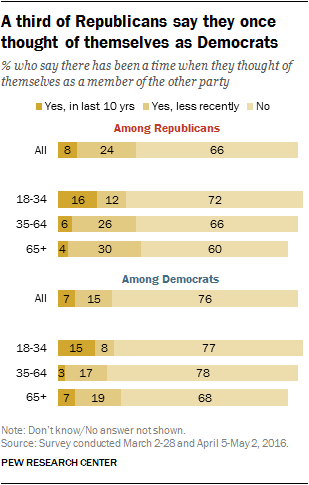 However, relatively small numbers in each party – 8% of Republicans and 7% of Democrats – say they have thought of themselves as members of the other party in the past decade. 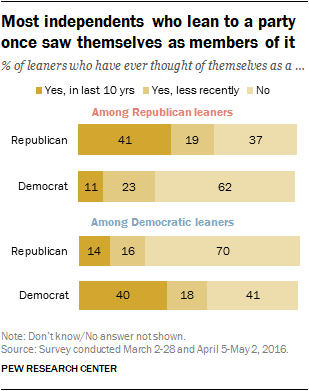 Among independents who lean to the Republican and Democratic parties, most at one time thought of themselves as members of the party to which they currently lean.

About a third of Republican-leaning independents (35%) say in the past they thought of themselves as Democrats, while a comparable share of Democratic leaners say they once viewed themselves as Republicans.

Partisan Antipathy: More Intense, More Personal
Partisans Differ Widely in Views of Police Officers, College Professors
Political Polarization in Action: Insights into the 2014 Election from the American Trends Panel
Political Independents: Who They Are, What They Think