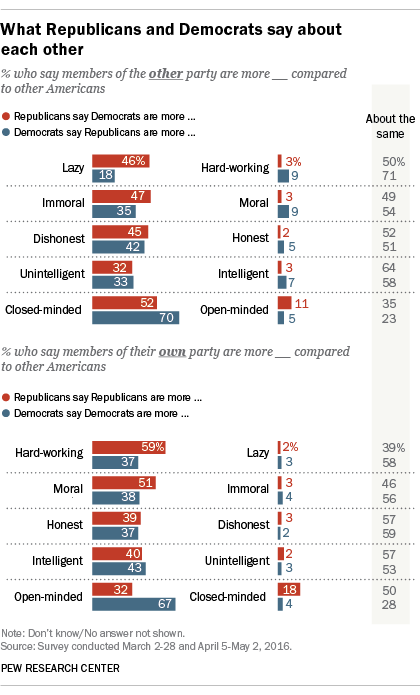 Though no one negative trait stands out to the same degree among Republicans in their evaluations of Democrats, Republicans are somewhat more likely to lodge criticism in several areas: Roughly half (52%) think of Democrats as more closed-minded than other Americans, and about as many say Democrats are more immoral (47%), more lazy (46%) and more dishonest (45%).

Partisans also have positive associations with members of their own party, and these largely mirror the negative stereotypes of the other party. Almost six-in-ten Republicans (59%) say Republicans are more hard-working than other Americans; just 37% of Democrats say the same about fellow Democrats. And while about half of Republicans (51%) see members of their party as more moral than other Americans, a smaller share of Democrats (38%) say this about their co-partisans.

Republicans and Democrats are equally likely to say those in the other party are unintelligent (32% vs. 33%, respectively) and to view members of their own party as intelligent (43% vs. 40%). 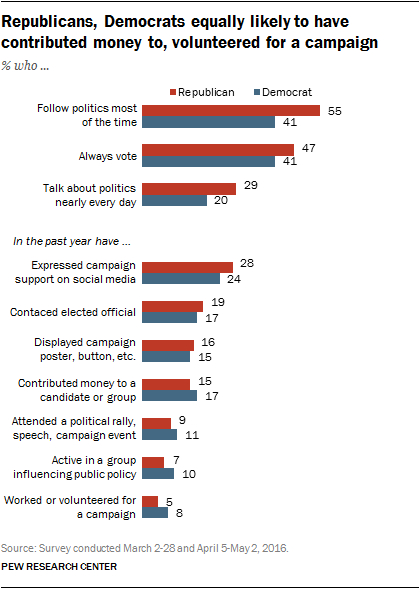 Participation in politics can take a variety of different forms. More than half of Republicans (55%) and roughly four-in-ten Democrats (41%) report following what is going in government and public affairs most of the time. However, only 5% of Republicans and 8% of Democrats say they have worked or volunteered for a political campaign over the past year.

Contributing money to candidates or groups working to elect candidates is somewhat more common (15% of Republicans and 17% of Democrats have done this in the last year), while roughly a quarter of Republicans (28%) and Democrats (24%) say they have publicly expressed support for a political campaign on Facebook, Twitter or other social media.

More participation among those who hold negative partisan stereotypes 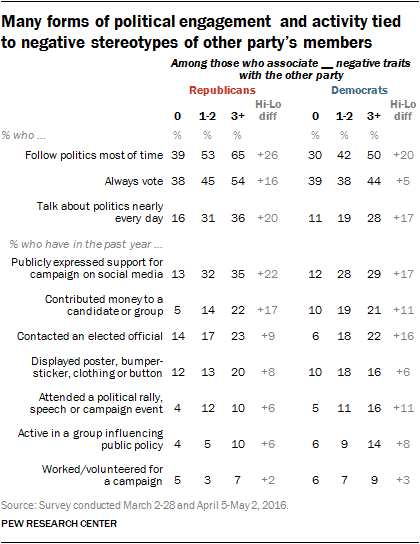 About one-in-four partisans hold none of these negative stereotypes of those on the other side (25% of Republicans and 22% of Democrats). Across most measures of political participation, these individuals with no negative partisan stereotypes were less likely to participate in politics.

Conversely, those who associate three or more negative traits with people in the opposing party (as 37% of Democrats and 44% of Republicans do) participate in politics at the highest rates.

Similar patterns are evident for other types of political activity, such as contacting elected officials and publicly expressing support for candidates, and are seen among both Democrats and Republicans.

Partisanship a factor in views of neighbors 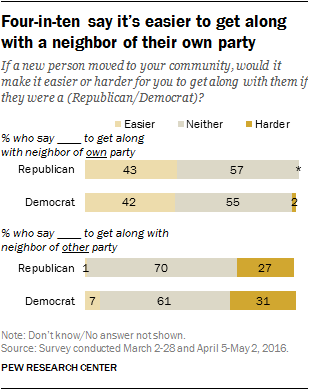 For many Republicans and Democrats alike, the extent to which they might get along with a new neighbor might depend on who that neighbor is – and their partisan affiliation.

Highly engaged partisans (those who vote regularly, and either volunteer or contribute to campaigns) are far more likely than those who are less engaged to say it would be easier to get along with a co-partisan – and harder to get along with someone from the other party.

In thinking about a new person in the community, identical majorities of both Republicans and Democrats who are highly engaged (61%) would find it a lot or somewhat easier to get along if the person were a member of their own party.

Fewer of those who are less politically engaged feel the same way (40% of Republicans and 38% of Democrats), with about six-in-ten saying it would be neither easier nor harder.

Similarly, those with higher levels of political engagement are more likely to express skepticism about being able to get along with new neighbors identifying with the other party: 44% of highly engaged Democrats and nearly as many highly engaged Republicans (38%) say it would be harder to get along with a new person in the community if they were a member of the other party. By comparison, only about a quarter of less engaged Democrats (29%) and Republicans (25%) would find it harder to get along with a neighbor of the opposing party.

Republicans and Democrats show some distinctive preferences toward other potential characteristics of new neighbors as well, from gun ownership to belief in God – though in nearly all cases, majorities say these traits would not have an effect on their ability to get along with a new neighbor.

Republicans are about twice as likely as Democrats to say it would be easier to get along with a new person in the community if they had served in the military (42% vs. 18%) or regularly attended church (41% vs. 23%). Still, most Democrats say these traits would not have much impact on their ability to get along. 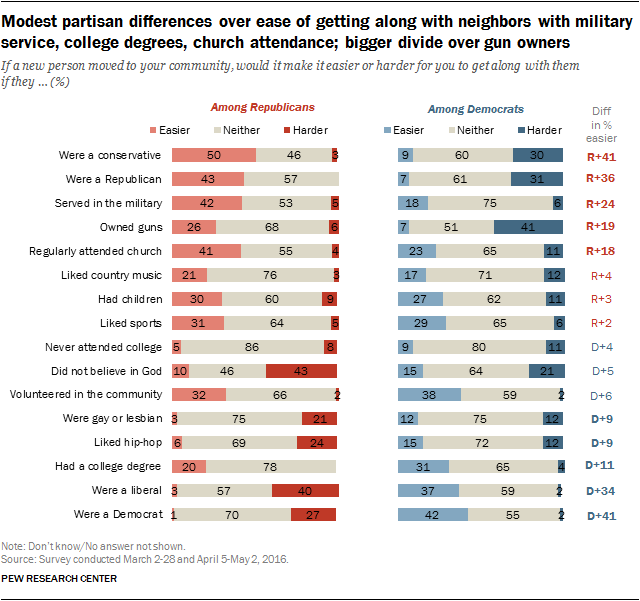 About three-in-ten Democrats (31%) and somewhat fewer Republicans (20%) say having a college degree is something that would make it easier to get along with a neighbor, though clear majorities in both parties say this would not impact their ability to get along.

Neighbors who like sports, have children or volunteer in the community are viewed as easier to get along with by more than a quarter of Republicans and Democrats alike. In both parties, relatively few say these characteristics would make it harder to get along with a neighbor, while most say they would not matter much.

Next: 5. Views of parties’ positions on issues, ideologies
← Prev Page
Page1Page2Page3Page4You are reading page5Page6Page7Page8Page9Page10
Next Page →

Partisanship and Political Animosity in 2016 1. Feelings about partisans and the parties 2. The roots of partisanship 3. Partisan environments, views of political conversations and disagreements
4. Partisan stereotypes, views of Republicans and Democrats as neighbors
Political engagement and partisanshipMore participation among those who hold negative partisan stereotypesPartisanship a factor in views of neighbors
5. Views of parties’ positions on issues, ideologies 6. How do the political parties make you feel? 7. Partisan views of 2016 candidates, Barack and Michelle Obama, views of the election Methodology Appendix A: Measures and scales