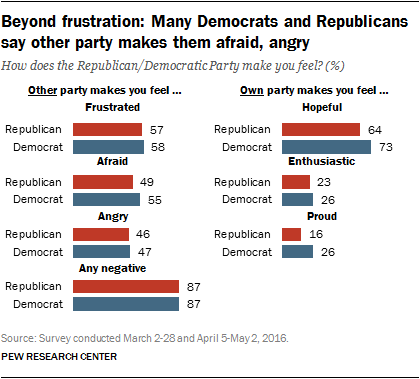 Republicans and Democrats have strong negative reactions to the opposing party. Feelings of frustration are most common – 58% of Democrats and 57% of Republicans feel frustrated by the other party. But large shares also react with fear and anger toward the other party.

A majority of Democrats (55%) say the GOP makes them feel afraid, while 49% of Republicans say the same about the Democratic Party.

And nearly half of Democrats (47%) and Republicans (46%) say the other party makes them feel angry.

Overwhelming majorities in both parties (87% in each) have at least one of these negative feelings about the other party – frustration, fear or anger. 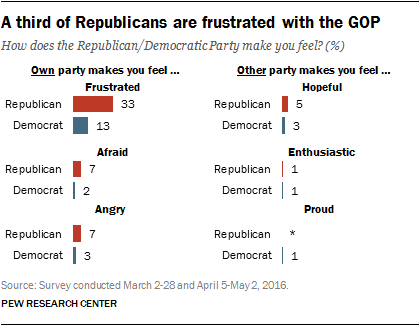 Very few partisans feel afraid or angry toward their own party. And only tiny shares in each party say the other party makes them feel hopeful, enthusiastic or proud.

Those who are more politically active are significantly more likely to be express negative emotions about the other party – particularly to say that it makes them feel afraid or angry.

Among highly politically engaged Republicans – those who say they vote regularly and have volunteered for or donated to a political campaign in the past year – 62% say that the Democratic Party makes them feel afraid. Among those moderately engaged (those who vote regularly, but do not participate in or donate to campaigns) 51% are afraid. And among the least engaged Republicans (irregular voters or those not registered to vote), just 37% say they are afraid of the Democratic Party.

The pattern is similar among Democrats. Fully 70% of highly engaged Democrats say they are afraid of the Republican Party, compared with 46% of Democrats who do not vote regularly or are not registered.

Similarly, political engagement is associated with anger at the other party: 58% of both Democrats and Republicans who are highly politically engaged are angered by the other party; fewer than half of those who are less engaged say the same.

Political engagement and feelings about one’s own party 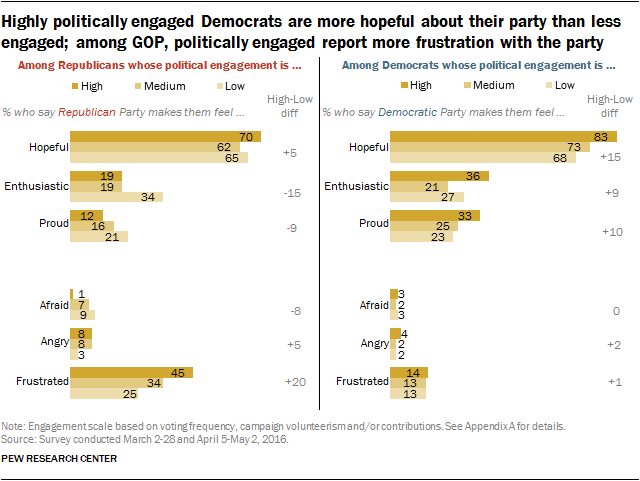 Among Republicans, the GOP inspires feelings of hope among similar shares of the highly engaged as well as the least engaged (70% vs. 65%). But about a third of the least engaged Republicans (34%) feel enthusiastic about the GOP, compared with 19% of those who are more politically engaged. Relatively few Republicans overall (16%) feel proud of the GOP, and there is no significant difference by levels of political engagement.

Primary preferences and views of the parties 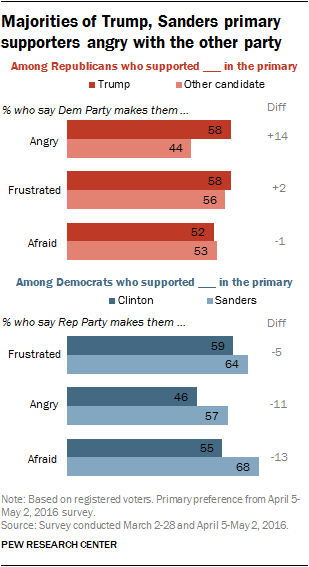 On the other hand, Democratic supporters of Clinton and Sanders are about equally hopeful or enthusiastic about the Democratic Party, while those who backed Clinton are more likely than Sanders supporters to say that the party makes them proud (32% vs. 21%).

How leaners feel about their party and the opposition 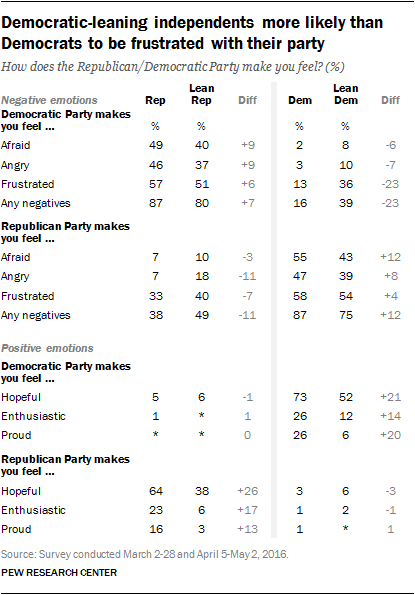 Next: 7. Partisan views of 2016 candidates, Barack and Michelle Obama, views of the election
← Prev Page
Page1Page2Page3Page4Page5Page6You are reading page7Page8Page9Page10
Next Page →

Partisan Antipathy: More Intense, More Personal
Partisans Differ Widely in Views of Police Officers, College Professors
Political Polarization in Action: Insights into the 2014 Election from the American Trends Panel
Political Independents: Who They Are, What They Think