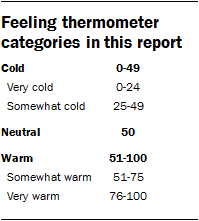 The survey measured ratings toward a number of groups and people in the U.S. on a “feeling thermometer” ranging from zero (“as cold and negative as possible”) to 100 (“as warm and positive as possible”), with 50 as the neutral point. See topline for full question wording.

Throughout this report, ratings on the scale are grouped according to intensity as shown in the accompanying table.

Throughout this report, a three category measure of political engagement is used.

The ideological consistency scale is composed of 10 questions asked on Pew Research Center surveys going back to 1994 to gauge peoples’ ideological worldview. The questions cover a range of political values including attitudes about size and scope of government, the social safety net, immigration, homosexuality, business, the environment, foreign policy and racial discrimination.

The scale is designed to measure how consistently liberal or conservative people’s responses are across these various dimensions of political thinking (what some refer to as ideological ‘constraint’). Though this measure is correlated with self-identified ideology, where people fall on this scale does not always align with whether they think of themselves as liberal, moderate or conservative.

The questions in the scale were asked on the initial recruitment surveys (either the 2014 Political Polarization and Typology Survey, conducted January 23rd to March 16th, 2014 or the 2015 Survey on Government, conducted August 27th to October 4th, 2015).

For more detail on the items in the scale, see here.

Partisanship and Political Animosity in 2016 1. Feelings about partisans and the parties 2. The roots of partisanship 3. Partisan environments, views of political conversations and disagreements 4. Partisan stereotypes, views of Republicans and Democrats as neighbors 5. Views of parties’ positions on issues, ideologies 6. How do the political parties make you feel? 7. Partisan views of 2016 candidates, Barack and Michelle Obama, views of the election Methodology
Appendix A: Measures and scales
Thermometer ratingsPolitical engagementParty issue agreement scaleIdeological consistency scale