Republicans and Democrats feel much more negatively toward the other’s party’s presumptive presidential nominees than they do toward members of the opposing party. (The surveys were conducted from early March through early May, before Hillary Clinton and Donald Trump effectively secured their party’s nominations.) 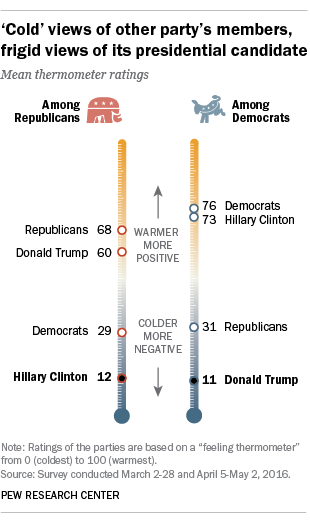 The average rating for Trump among Democrats is 11. Fully 82% of Democrats give him a very cold rating, with 68% giving him a rating of zero on the 0-100 scale.

Political engagement and ratings of Clinton and Trump 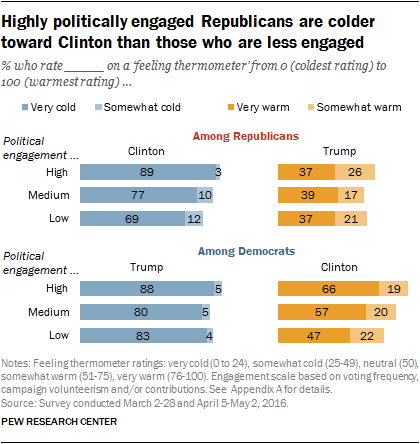 Nearly nine-in-ten highly politically engaged Republicans (89%) – those who vote regularly and either volunteer or contribute to campaigns – give Clinton very cold thermometer ratings. That compares with 69% of those who are largely disengaged politically (those who do not vote regularly or are not registered to vote).

Among Democrats, views of Trump are consistent across levels of political engagement. Fully 88% of highly engaged Democrats give him a very cold rating, as do 83% of those who not politically engaged.

On the other hand, highly engaged Democrats are more likely than those with lower levels of engagement to give Clinton warm ratings. Among Republicans, views of Trump differ little by levels of political engagement.

Though Clinton is viewed more warmly by Democrats than Trump is by Republicans overall, the contrast is even more pronounced among partisans who are highly politically engaged: While 66% of highly engaged Democrats rate Clinton very warmly (and 85% rate her at least somewhat warmly), just 37% of highly engaged Republicans rate Trump warmly (64% rate him at least somewhat warmly).

Partisanship and feelings about the election 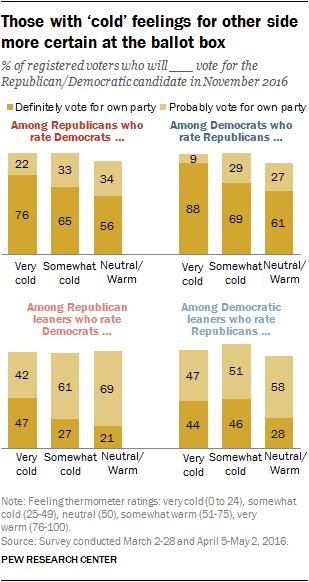 Party affiliation – and leaning – is strongly associated with intention to vote in presidential elections. Nearly all partisans, and in excess of 85% of partisan leaners, say they will definitely or probably vote for the candidate of the party they affiliate with or lean to, regardless of who the candidates are. (These surveys were conducted before Trump and Clinton effectively secured their party’s nominations.)

But those who feel more negatively about the opposing party (and more warmly toward their own) are more certain about their choice in November.

Those who feel less coldly toward the opposing party are less definitive in their intentions and more likely to say they will “probably” vote for the party’s nominee. Independent voters, even those who lean toward a party, are less likely than partisans to say they will “definitely” vote for a party’s candidate, though nearly all say they probably or definitely will. But, as with partisans, feelings toward members of the other party are linked to certainty among these voters. 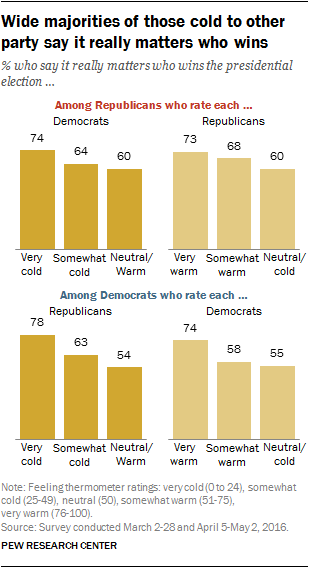 Similarly, partisans with highly negative views of the other party are more likely than those who feel less negatively to say that it really matters who wins this fall’s presidential election.

Likewise, Republicans who give members of their own party a very warm rating are more likely than those who are neutral or cold to Republicans to say it really matters who wins (73% vs. 60%).

The differences are similar among Democrats. Among all Democrats, 66% say the outcome of the election really matters. Among those who rate Republicans very coldly on the scale, 78% express this view. Fewer of those who are somewhat cold to Republicans (63%) and those who are neutral or warm toward members of the other party (54%) say the same.

And while just over half of Democrats with a neutral or cold rating (55%) or a somewhat warm rating (58%) toward Democrats say it really matters who wins, fully 74% of Democrats who rate members of their own party warmly say this. 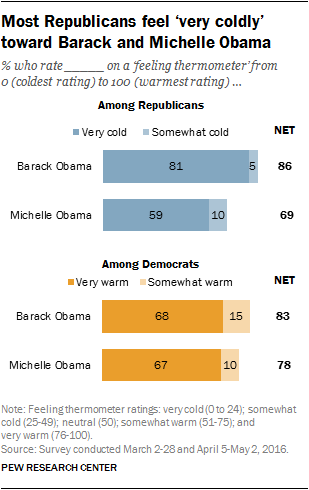 Nearly six-in-ten Republicans (59%) give very cold ratings to Michelle Obama; 40% of Republicans give her a zero. About two-in-ten (21%) give her a neutral rating of 50; only 8% rate her warmly.

Republican views of Barack Obama do not vary substantially by political engagement, though the most politically engaged Republicans are 19 percentage points more likely than the less engaged to give Michelle Obama a cold rating (85% vs. 66%).

Democrats have highly positive views of both Barack and Michelle Obama. Fully 68% rate Barack Obama very warmly (a rating of 76 or more on the 100-points scale), while 67% give the same rating to Michelle Obama. Just 7% of Democrats give either of the Obamas cold ratings.

Partisanship and Political Animosity in 2016 1. Feelings about partisans and the parties 2. The roots of partisanship 3. Partisan environments, views of political conversations and disagreements 4. Partisan stereotypes, views of Republicans and Democrats as neighbors 5. Views of parties’ positions on issues, ideologies 6. How do the political parties make you feel?
7. Partisan views of 2016 candidates, Barack and Michelle Obama, views of the election
Political engagement and ratings of Clinton and TrumpPartisanship and feelings about the electionDeeply polarized views of Barack and Michelle Obama
Methodology Appendix A: Measures and scales