The public is deeply divided along partisan and ideological lines in its opinions about environmental issues. And these differences are reflected in how the political typology groups view these issues.

In views of global warming, nearly all Solid Liberals say there is clear evidence that Earth’s temperatures have been rising, with 95% saying this is mostly caused by human activity, such as burning fossil fuels. Among Core Conservatives, only about quarter see solid evidence of global warming – and just 5% say the main cause is human activity.

Opinions vary across the other typology groups. Majorities across the Democratic-leaning groups say there is solid evidence of global warming, but only about half of Devout and Diverse (52%) say it is mostly caused by human activity, the lowest share in any Democratic group. 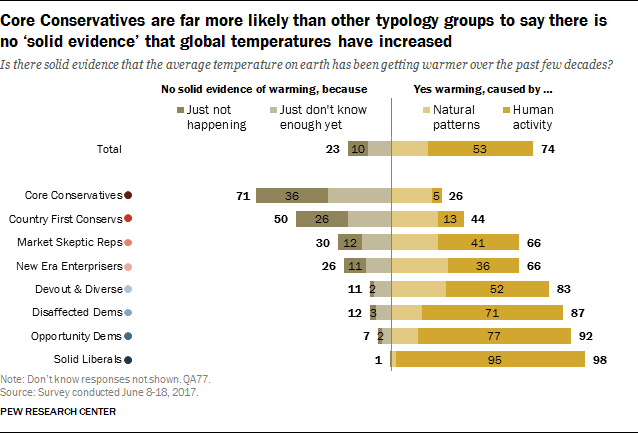 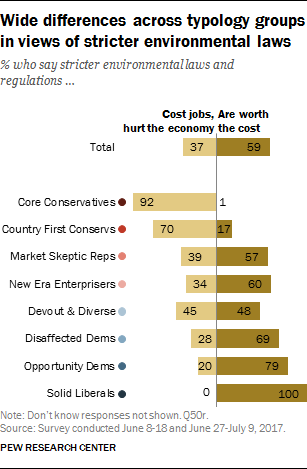 solid evidence). Two-thirds of Market Skeptic Republicans and New Era Enterprisers (66% each) say there is solid evidence of global warming.

Importance of personal efforts to help the environment

Views on the importance of personal efforts to help protect the environment given the cost vary across typology groups as well.

Solid Liberals are the most likely to say helping the environment is so important that they do things in their own lives despite the cost or time investment: 80% say this, while just 17% say it’s important but they don’t have the 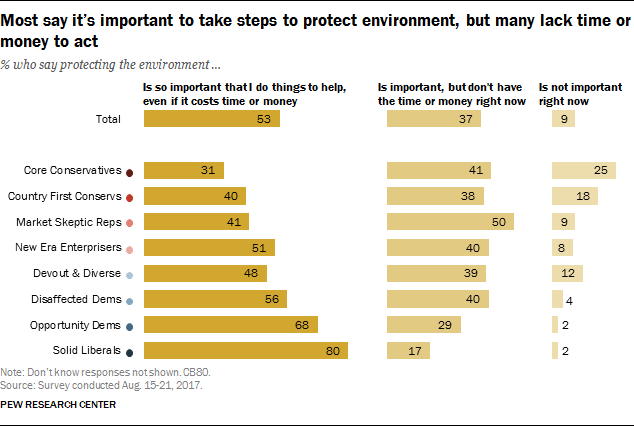 Majorities of all other groups say it’s important to protect the environment, though there are differences in whether it is something they are able to do now. For example, 68% of Opportunity Democrats say protecting the environment is important enough that they do things in their own lives, but smaller shares of Disaffected Democrats (56%) and Devout and Diverse (48%) – two financially hard-pressed groups – say the same.

Next: 9. Views on religion and social issues
← Prev Page
Page4Page5Page6Page7Page8You are reading page9Page10Page11Page12Page13Page14
Next Page →

Political Typology Reveals Deep Fissures on the Right and Left 1. Partisanship and political engagement 2. Views of the parties and political figures 3. Views of life in the country today, U.S. global standing 4. Government’s role and performance, views of national institutions, expertise 5. Views of the economy and the social safety net 6. Race and discrimination, opinions about immigrants and Islam 7. Foreign policy
8. Environmental attitudes
Importance of personal efforts to help the environment
9. Views on religion and social issues 10. Financial well-being, personal characteristics and lifestyles of the political typology Appendix 1: Typology Group Profiles Appendix 2: About the Political Typology Methodology