Partisanship and ideology are major factors in attitudes about foreign policy and U.S. global engagement. But both the Republican-oriented and Democratic-leaning coalitions are internally divided in opinions about America’s 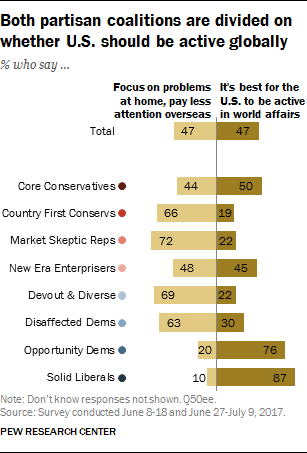 Among the public overall, 47% say “it’s best for the future of our country to be active in world affairs,” while an identical percentage says “we should pay less attention to problems overseas and concentrate on problems here at home.”

More Americans say it is best for the U.S. to be active globally than did so in 2014 (35%), with the shift coming almost entirely among Democrats and Democratic-leaning independents.

The Republican-leaning typology groups also are divided over U.S. global activism. Half of Core Conservatives – who are better educated and more affluent than other GOP groups – say the U.S. should be active globally, as do 45% of New Era Enterprisers.

By contrast, majorities of both Country First Conservatives (66%) and Market Skeptic Republicans (72%), who are far less financially satisfied than the other Republican groups, 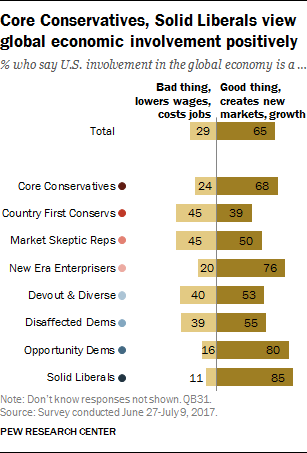 say the U.S. should concentrate on problems at home and pay less attention to problems overseas.

Among GOP-leaning groups, Country First Conservatives and Market Skeptic Republicans are the most skeptical of global economic engagement, while Core Conservatives and New Era Enterprisers are much more positive.

Opinions about cooperating with U.S. allies are deeply divided along partisan and ideological lines. Among the public overall, 59% say the U.S. “should take allies’ interests into account, even if it means compromising with them.” Slightly more than a third (36%) say the U.S. should “follow its own national interests, even when allies strongly disagree.” 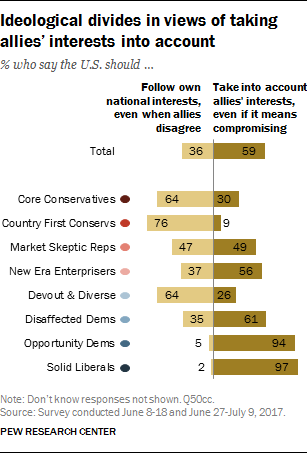 Reflecting their name, Country First Conservatives are most likely to say the U.S. should follow its own interests, even when allies disagree (76%). A majority of Core Conservatives (64%) share this view. However, Market Skeptic Republicans and New Era Enterprisers are more divided in views of dealing with U.S. allies.

On the left, nearly all Solid Liberals (97%) and Opportunity Democrats (94%) say the U.S. should take into account allies’ interests, even if it means compromising. A smaller majority of Disaffected Democrats (61%) say the same.

But among Devout and Diverse, just 26% favor taking allies’ interests into account, while more than twice as many (64%) say the U.S. should follow its own national interests, even when allies disagree.

Overall, about half of the public (51%) thinks Americans need to “sacrifice some privacy and freedoms in order to be safe from terrorism”; about as many (46%) think Americans do not need to do this.

Solid Liberals stand out from all other typology groups on this question: They are the 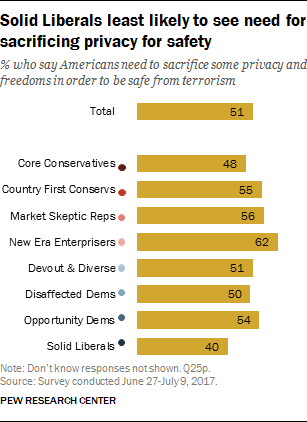 By contrast, Opportunity Democrats, Disaffected Democrats and Devout and Diverse are split in their opinions.

Among Republican-leaning typology groups, majorities of Country First Conservatives (55%), Market Skeptic Republicans (56%) and New Era Enterprisers (62%) think Americans need to sacrifice some privacy in the interest of safety from terrorism.

However, Core Conservatives are divided. As many of them say Americans need to sacrifice some civil liberties to be safe from terrorism as say they do not (48% each).

Political Typology Reveals Deep Fissures on the Right and Left 1. Partisanship and political engagement 2. Views of the parties and political figures 3. Views of life in the country today, U.S. global standing 4. Government’s role and performance, views of national institutions, expertise 5. Views of the economy and the social safety net 6. Race and discrimination, opinions about immigrants and Islam
7. Foreign policy
‘Country First Conservatives’ staunchly oppose heeding allies’ interestsPublic split over need to give up privacy for safety from terrorism
8. Environmental attitudes 9. Views on religion and social issues 10. Financial well-being, personal characteristics and lifestyles of the political typology Appendix 1: Typology Group Profiles Appendix 2: About the Political Typology Methodology