Views of the economy and social safety net reflect the distinct profiles of the typology groups. Opinions differ among those with similar partisan leanings while still following the traditional, wide divides between the left and right.

While most Americans and typology groups see economic inequality as a problem, Core Conservatives express relatively low levels of concern about this issue. And while most Republican-oriented groups think the economic system is generally fair to most Americans, a large majority of Market Skeptic Republicans say it unfairly favors powerful interests.

On the Democratic side, there is disagreement over whether hard work leads to success for most people. Solid Liberals are broadly skeptical, but a large share of Opportunity Democrats think most people can get ahead if they’re willing to work hard.

And when it comes to two areas of current political debate, taxes and health care, the views of the typology groups are nuanced. There are wide differences between groups on the basis on partisan affiliation, but there also are gaps within the two broader party coalitions when it comes to the best way to address the two issues.

Evaluations of the U.S. economic system

Democratic-oriented typology groups are especially likely to view the economic system as unfair. Fully 99% of Solid Liberals and Disaffected Democrats say the country’s economic system unfairly favors powerful interests. Two-thirds of Opportunity Democrats (67%) say this, as do a somewhat smaller majority (55%) of Devout and Diverse. 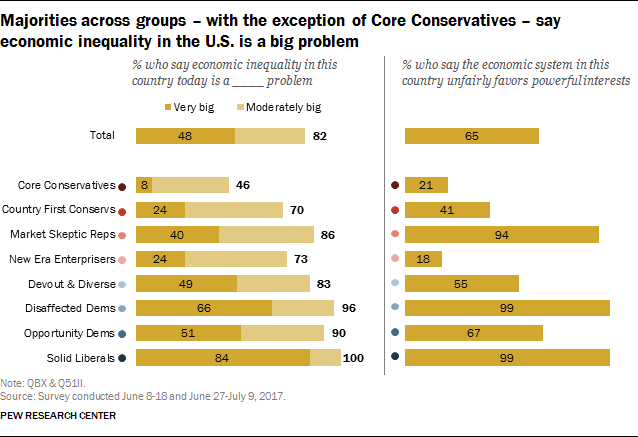 When asked about the issue of economic inequality, most Americans (82%) say it is either a very big problem (48%) or a moderately big problem (34%) in the country today. Relatively few say it is a small problem or not a problem at all.

Views of hard work and success

Despite widespread sentiment that the economic system is unfair, most Americans continue to believe in the ability of people to get 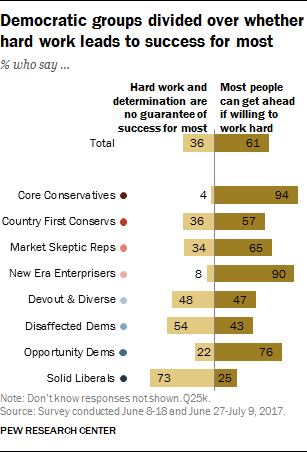 ahead through hard work. About six-in-ten (61%) say most people who want to get ahead can make it if they’re willing to work hard; fewer (36%) say that hard work and determination are no guarantee of success for most people.

A wide majority of Solid Liberals (73%) think hard work and determination are no guarantee of success for most people. Devout and Diverse and Disaffected Democrats, both financially strapped groups, are roughly divided in their views on hard work and success.

Roughly nine-in-ten Core Conservatives (94%) and New Era Enterprisers (90%) think most people can get ahead if they’re willing to work hard. Smaller majorities of Market Skeptic Republicans (65%) and Country First Conservatives (57%) say the same. 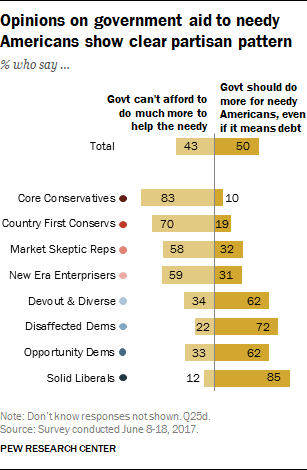 Views on the social safety net follow a liberal-conservative pattern across the typology groups, with a wide gulf between the views of Core Conservative and Solid Liberals.

Overall, 85% of Solid Liberals say the government “should do more to help needy Americans, even if it means going deeper into debt.” Most Disaffected Democrats (72%), Opportunity Democrats (62%) and Devout and Diverse (62%) share this view.

Republican-oriented typology groups take the opposite view: 83% of Core Conservatives and 70% of Country First Conservatives say the government cannot afford to do much more to help the needy. Smaller majorities of Market Skeptic Republicans (58%) and New Era Enterprisers (59%) say the same. 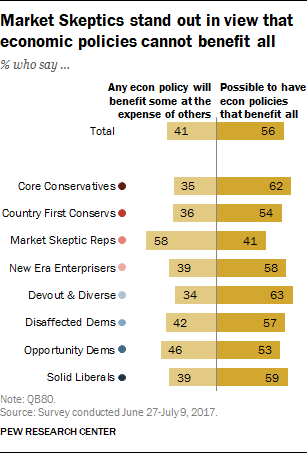 Market Skeptic Republicans stand out from all other groups in their views. A majority (58%) says that pretty much any economic policy will end up benefiting some at the expense of others, compared with 41% who say it’s possible to have policies that benefit all. Along with their opinions on business and other economic issues, Market Skeptic Republicans’ view that economic policies are inherently unfair distinguish them from other Republican-oriented groups.

Divisions across typology groups in views of health care

Core Conservatives and Solid Liberals are poles apart on the question of the government’s role in health care, but this hot-button political issue also surfaces differences among the Republican-oriented groups. And while majorities of all Democratic-oriented groups think the government should make sure all Americans have health coverage, there are differences over whether the country should institute a “single-payer” system. 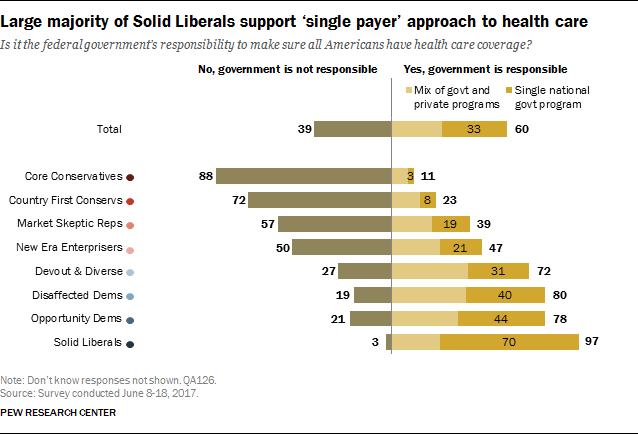 Among the Democratic-oriented groups, about seven-in-ten or more say it is the government’s responsibility to make sure all Americans have health care coverage. But there are differences in views about the right approach for ensuring coverage.

By comparison, Opportunity Democrats are only somewhat more likely to support single payer over a mix of public and private programs (44% vs. 33%). Disaffected Democrats and Devout and Diverse say it’s the government’s responsibility to make sure all Americans have health care, but they are about evenly divided over the best approach for providing coverage. 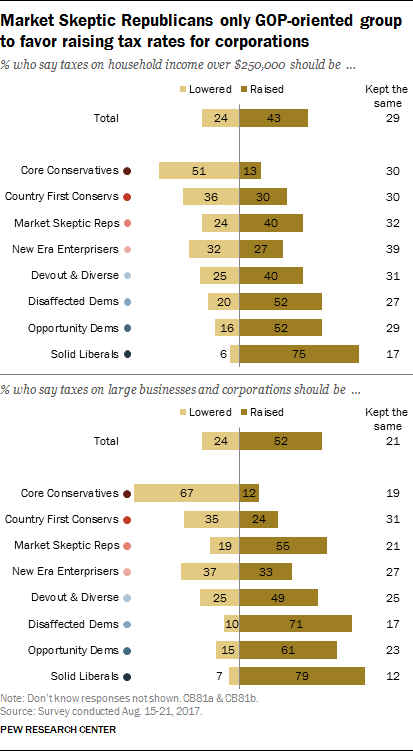 Core Conservatives are more likely than all other groups to say there should be lower taxes on both on large businesses and corporations (67%) and household income over $250,000 (51%).

Market Skeptic Republicans, who widely say the economic system unfairly favors powerful interests, differ with the other right-leaning groups on tax policy. More say tax rates on high-earning households should be raised (40%) than say they should be kept the same (32%) or lowered (24%). And a 55% majority of Market Skeptic Republicans also says taxes on large businesses and corporations should be raised. Country First Conservatives and New Era Enterprisers are largely split in their views on tax rates for corporations and higher incomes, with fewer than 40% advocating any single approach to either question.

Large majorities of Solid Liberals think taxes should be raised on businesses and corporations (79%) as well as on household incomes over $250,000 (75%).

Among Devout and Diverse, Disaffected Democrats and Opportunity Democrats, greater shares say taxes should be raised than lowered on businesses and corporations as well as on household incomes over $250,000. However, slightly larger shares of all three groups support higher tax rates on large businesses and corporations than on household incomes over $250,000.

Most prioritize worker training in efforts to improve job situation 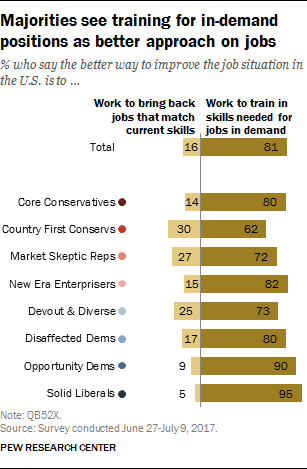 Wide majorities say the better way to improve the job situation in this country is “working to train people in the skills needed for jobs that are in demand” (81%) rather than “working to bring back or save the kinds of jobs that match the skills people already have” (16%).

The typology groups are largely in agreement on the better approach to improve the job situation. For example, large shares of Solid Liberals (95%) and Core Conservatives (80%) say the better way is to work to train people for in-demand jobs.

Country First Conservatives are the least likely to say this, though a majority still do: 62% say the better option is to train for in-demand jobs, while 30% say it’s better to work to bring back jobs that match current skills in the workforce.

Next: 6. Race and discrimination, opinions about immigrants and Islam
← Prev Page
Page4Page5You are reading page6Page7Page8Page9Page10Page11Page12Page13Page14
Next Page →