When asked about how Trump conducts himself as president, 58% of Americans say they do not like his conduct; a quarter (25%) say they have mixed feelings, while 16% say they like the way he conducts himself. 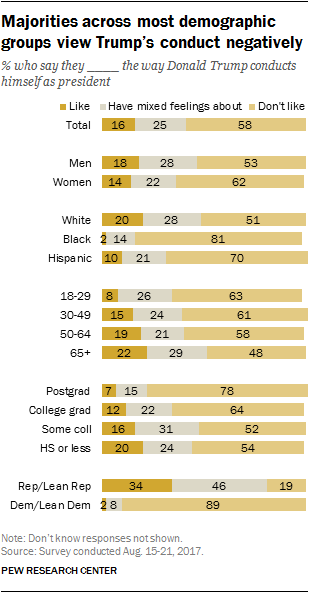 Large majorities across most demographic groups express negative views of the way Trump conducts himself. However, as with views of Trump’s overall job performance, there are sizable differences in these opinions.

Younger adults are more likely than older adults to say they do not like the way Trump conducts himself as president. About six-in-ten of those younger than 50 (62%) say they don’t like his demeanor, compared with roughly half of those ages 65 and older (48%).

There also is a wide educational gap in views of how Trump conducts himself. A 78% majority of those with postgraduate degrees say they do not like the way Trump comports himself, as do 64% of those with a college degree. Fewer of those with some college experience or less education rate Trump’s conduct negatively (53%).

While Republicans generally take a much less negative view of Trump’s conduct as president than do Democrats, there are large differences in opinions among Republicans. 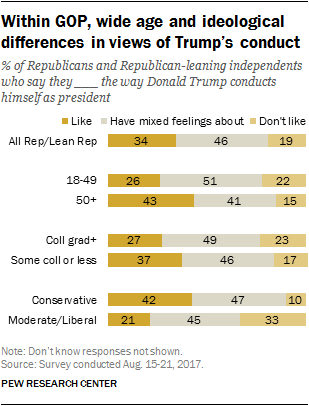 And among Republicans 50 and older, 43% say they like the way Trump conducts himself as president, compared with 26% of younger Republicans.

Republicans who do not have a bachelor’s degree are more likely than those who have graduated from college to say they like Trump’s conduct as president (37% vs. 27%).

Public divided over whether Trump is decisive, intelligent

Overall, about as many Americans say intelligent (51%) describes the president very or fairly well as say it does not describe him too well or well at all (48%). Similarly, about half say decisive describes Trump at least fairly well (48%). 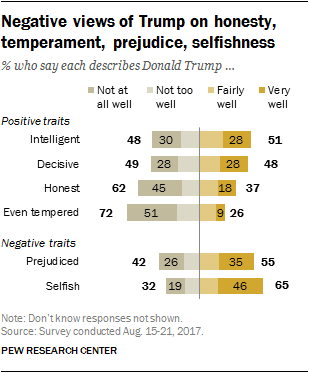 On other positive traits, however, Trump receives lower marks. More say honest does not describe the president too well or not well at all (62%) than think it describes him fairly or very well (37%). An even higher percentage (72%) says the phrase “even tempered” does not describe Trump well; 26% say it does.

Trump receives much lower marks from Republicans for his temperament: Fewer than half say even tempered describes him well (45%); 53% say this phrase describes him not too well or not at all well. 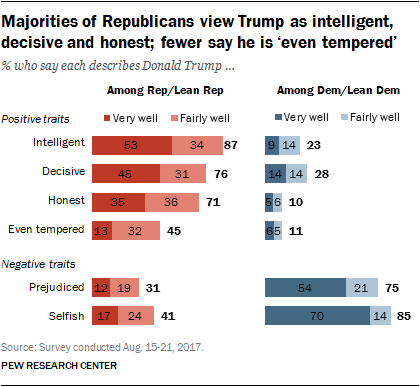 When it comes to negative traits, 41% of Republicans say the word selfish describes Trump well, while a majority (55%) say it does not. Even fewer Republicans (31%) characterize Trump as prejudiced; 65% say this does not describe him well.

Within GOP, conservatives more closely aligned with Trump on issues 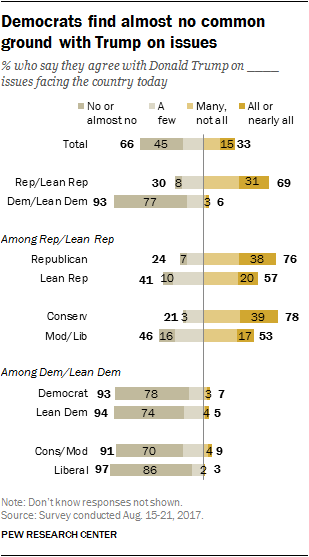 In addition, those who identify as Republicans are significantly more likely than independents who lean to the GOP to say they agree with Trump on at least most issues (76% vs. 57%).

The public has varying degrees of confidence in Trump’s handling of a range of specific issues. Half (50%) say they are very or somewhat confident that Trump can negotiate favorable trade agreements with other countries, while about as many (49%) say they are not too or not at all confident. 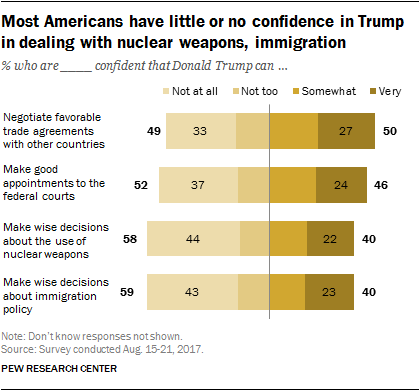 Across all four issues, Republicans and Republican leaners express far more confidence in Trump than do Democrats and Democratic leaners. 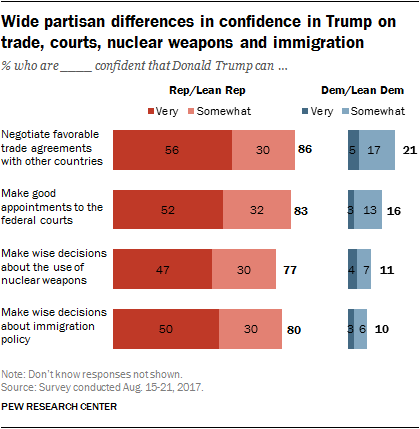 While Democrats are far less likely than Republicans to voice confidence in Trump, more Democrats say they are very or somewhat confident in Trump on trade (21%) than in dealing with nuclear weapons (11%) or immigration (10%). 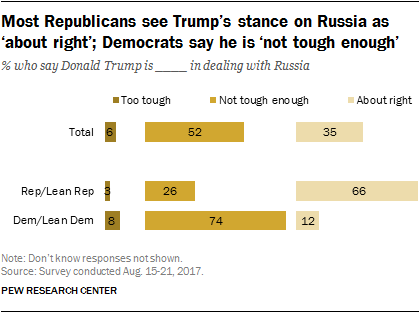 About half of the public (52%) thinks that Donald Trump is “not tough enough” in dealing with Russia. About a third of the country (35%) thinks that Trump is handling Russia “about right.”

Republicans and Democrats are sharply divided on the issue. About three-quarters (74%) of Democrats think that Trump is not tough enough in dealing with Russia, while about two-thirds (66%) of Republicans say that he is handling Russia about right.

Next: 2. In their own words: Likes and concerns about Trump
← Prev Page
Page1You are reading page2Page3Page4
Next Page →

Republicans Divided in Views of Trump’s Conduct; Democrats Are Broadly Critical
1. Views of Trump’s presidential conduct, handling of issues
Public divided over whether Trump is decisive, intelligentWithin GOP, conservatives more closely aligned with Trump on issuesMost lack confidence in Trump to make wise decisions on nuclear weaponsTrump’s approach toward Russia
2. In their own words: Likes and concerns about Trump Methodology