In his first seven months as president, Donald Trump has generally drawn high job approval ratings among Republicans. But a new survey finds that nearly a third of Republicans say they agree with the president on only a few or no issues, while a majority expresses mixed or negative feelings about his conduct as president. 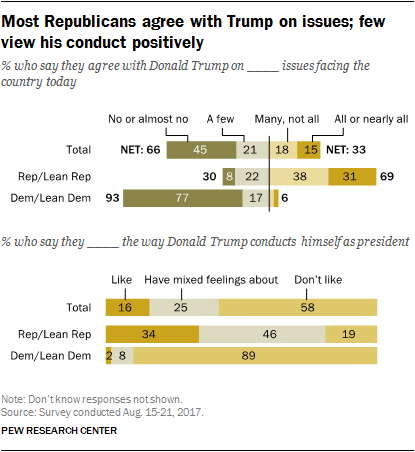 Overwhelming shares of Democrats disagree with Trump on all or nearly all issues and say they do not like his conduct as president. 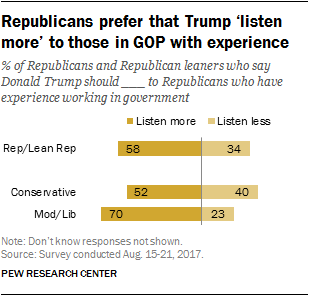 Most of the findings in this report are based on telephone interviews conducted Aug. 15-21, 2017 among a national sample of 1,893 adults ages 18 years or older who were previously interviewed in Pew Research Center surveys conducted in June and July.

The open-ended questions analyzed in this report are from a separate survey conducted Aug. 8-21, 2017 among 4,971 adults on the Center’s American Trends Panel (ATP), a nationally representative panel of randomly selected U.S. adults.

A separate survey, conducted on Pew Research Center’s nationally representative American Trends Panel, finds stark divisions between those who approve and those who disapprove of Trump’s job performance in their impressions of the president. This survey, conducted online Aug. 8-21 among 4,971 adults, asked respondents to describe in their own words what they like most about Trump and their biggest concern about how he is handling his job as president. For a sample of responses, see verbatim on positive and negative impressions of Trump’s presidency. 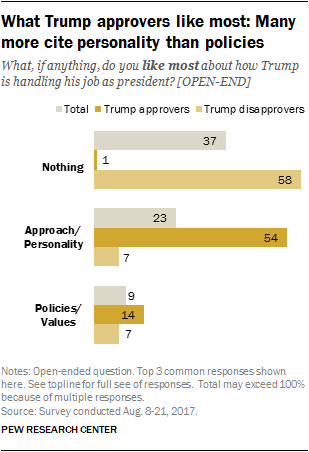 Trump’s personality is mentioned quite often both positively and negatively. Among those who approve of Trump’s job performance (36% of the public), more than half (54%) volunteer something about his personality or general approach as what they like most; mentions of Trump’s policies or agenda are a distant second, at 14%.

Some of those who cite Trump’s personality as what they like most about him point to his leadership and his determination to keep promises, while others praise Trump for his candor and for being unlike a typical politician.

Trump’s detractors have a hard time coming up with anything they like about him. Among those who disapprove of how he is handling his job (63% of the public), “nothing” is by far the most frequent response for what they like most about Trump. About four-in-ten (43%) say explicitly they like nothing about Trump’s performance and another 16% respond to this question by volunteering things they don’t like about him. 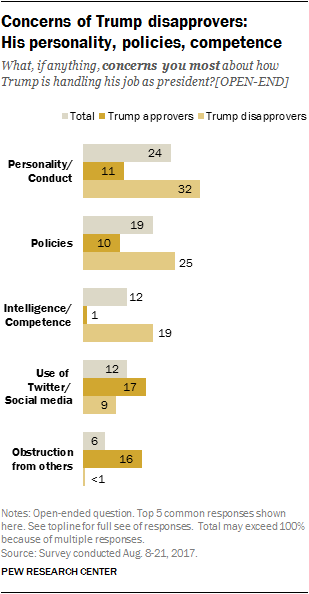 Those who disapprove of Trump cite several concerns about him: 32% point to his personality, including his temperament; 25% mention his policies, particularly foreign policy and its impact on U.S. standing in the world; and 19% fault his intelligence or competence.

Trump’s supporters raise different concerns: 17% of those who approve of his job performance cite his use of Twitter and other social media, while 16% say they are most concerned about obstruction from others, such as Congress and the news media. About one-in-ten of those who approve of Trump say their biggest concern is his personality (11%) and a similar share point to his policies (10%).

Overall, 4% of Americans mention concerns about Trump’s handling of racial issues or his own attitudes about race. However, more cite this concern after the Aug. 12 violence in Charlottesville, Virginia than did so before that point. From Aug. 13-21, 9% cite this concern, compared with 2% in earlier polling. Among those who disapprove of Trump, 15% of those completing the survey on or after Aug. 13 cite concerns about Trump’s approach to race, up from 3% who mention these concerns in the days before. 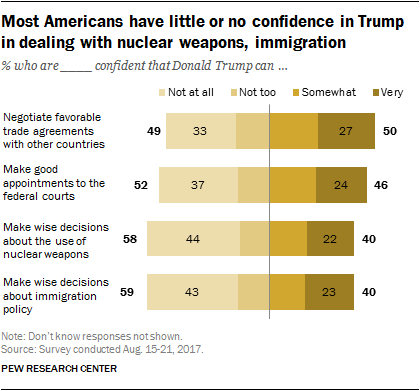 Few describe Trump as “even tempered.” Just 26% of the public, including 45% of Republicans and just 11% of Democrats, say the phrase “even tempered” describes Trump very or fairly well. However, about half of Americans (51%) view him as intelligent. For negative terms, majorities say that the traits selfish (65%) and prejudiced (55%) describe Trump very or somewhat well.

Next: 1. Views of Trump’s presidential conduct, handling of issues
← Prev Page
You are reading page1Page2Page3Page4
Next Page →

Republicans Divided in Views of Trump’s Conduct; Democrats Are Broadly Critical
Other important findings
1. Views of Trump’s presidential conduct, handling of issues 2. In their own words: Likes and concerns about Trump Methodology