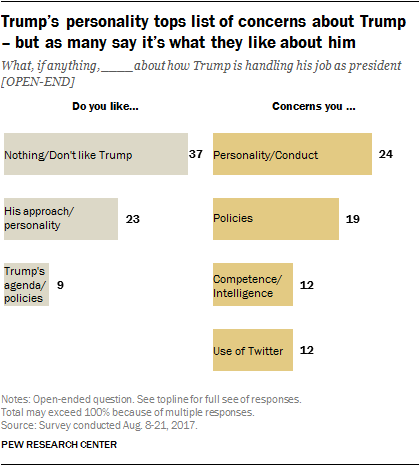 And Trump’s personality ranks as the most common response to an open-ended question about concerns people have about him. Here, too, about a quarter of Americans (24%) mention aspects of his personality or conduct – in this case, frequently mentioning Trump’s temperament or saying that he has a tendency to speak “off the cuff.”

Among those who approve of Trump’s job performance, about half (54%) cite aspects of his personality or approach as what they most like about Trump’s job performance, including 25% who call out his leadership style, say that he is keeping his promises or that he is getting things done as president. As one 57-year-old woman who approves of Trump put it: “He is a fighter and loves America as much as I do.” 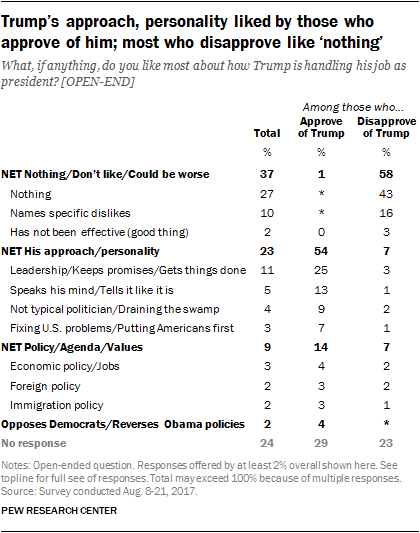 Trump’s policy positions or accomplishments are mentioned by 14% of those who approve of his job performance as the thing they like most about him: 4% specifically mention economic policies, including a respondent who says Trump “is promoting the economy,” and adds that “he pays no attention to the snowflakes and keeps his agenda.” A similar share mention foreign policy (3%) and immigration policy (also 3%), including a 30-year-old man who says that Trump is “cracking down” on immigration, and likes that he is “turning back the policies that the previous administration implemented.”

But those who disapprove have starkly different responses to the question about what, if anything, they like about Trump: Nearly six-in-ten (58%) say there is nothing they like about Trump – or take the question as an opportunity to list things they do not like about him. One says there is “absolutely nothing” he likes, adding that “every word, action and tweet is an embarrassment that likely imperils our freedom and safety.”

Others say they like that he isn’t getting more done. A 30-year-old woman likes most that he is “too incompetent and reactive to successfully implement his destructive agenda.”

Still, even among those who disapprove of Trump’s job performance, there are some who cite his approach or his policies as things they like. One says she “disagrees with his views,” but “appreciates the attempt at following through his word.” Another likes how Trump “handled the Trans Pacific Partnership deal,” but adds “that’s about it.” 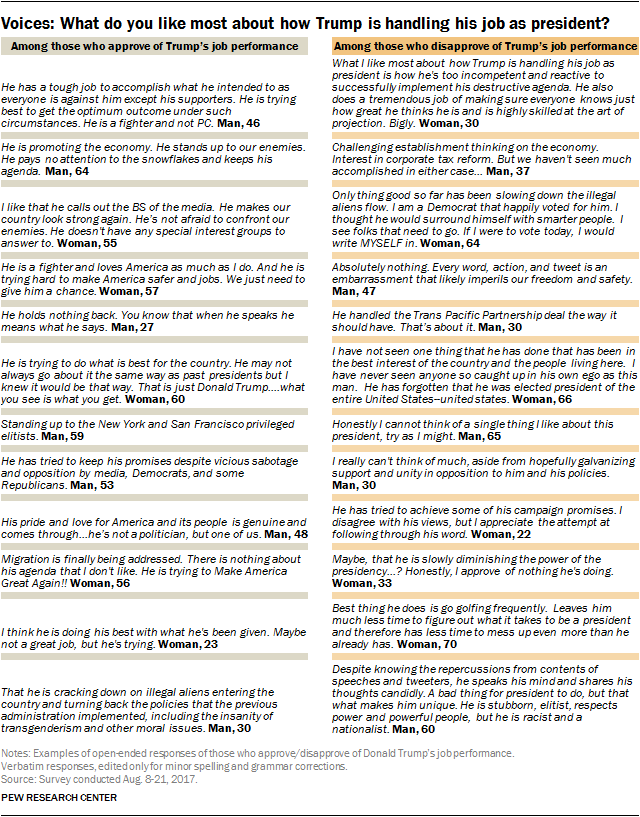 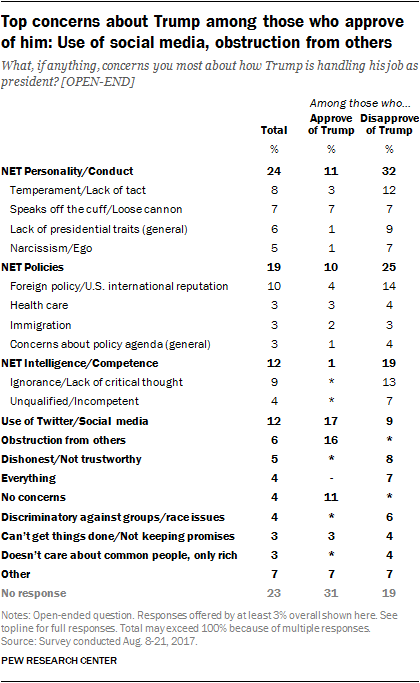 Asked what, if anything, concerns them about Trump’s job performance, 24% of the public mentions concerns about his personality, including 8% who mention his temperament or lack of tact and 7% who say he is not deliberate enough with his speech; 6% characterize their concern as Trump lacking in presidential traits, while 5% think the president is narcissistic or self-focused.

While these types of concerns are more likely to be cited by those who disapprove of Trump (32% do so), about one-in-ten of those who approve of Trump mention concerns about his personality or conduct, including a 67-year-old woman who says “his undignified way of speaking and not listening to those who could help him communicate better” is cause for concern.

About two-in-ten Americans (19%) mention policies as a concern about Trump. Again, those who approve of Trump are less likely than those who disapprove of Trump (10% vs. 25%) to say this. And though there is some overlap in the kinds of concerns cited by those who approve and disapprove of the president (“the situation in North Korea”), in other instances the concerns are mirror images of one another (for instance, when it comes to health care, a 56-year-old man who disapproves of Trump is concerned about “his attempts to dismantle the ACA [Affordable Care Act],” while a 63-year-old woman who supports Trump is concerned about Trump “not being able to repeal Obamacare”).

Trump’s competency or intelligence is mentioned by 12% of Americans as a concern, though very few who approve of him say this (just 1%), while roughly two-in-ten (19%) who disapprove of Trump do: A 46-year-old woman who disapproves of Trump says “people elected a less than smart guy to do the job.”

Also mentioned by 12% of Americans, including 17% of those who approve Trump, is his behavior on social media – particularly Twitter. A 30-year-old man who approves of Trump’s job performance overall exemplifies a common thread in these responses when he says, “I wish he would stop tweeting.” This critique is sometimes more pointed, even among his supporters: A 63-year-old woman says “his constant, immature tweets make him sound like a twit and just provide ammunition for the opposition.”

These sentiments are nearly exclusively seen among those who approve of Trump, 16% of whom say their concern about Trump is the obstruction he faces. As one puts it: “Nothing really concerns me about Trump. It’s all the overwhelming opposition to Trump that concerns me.” 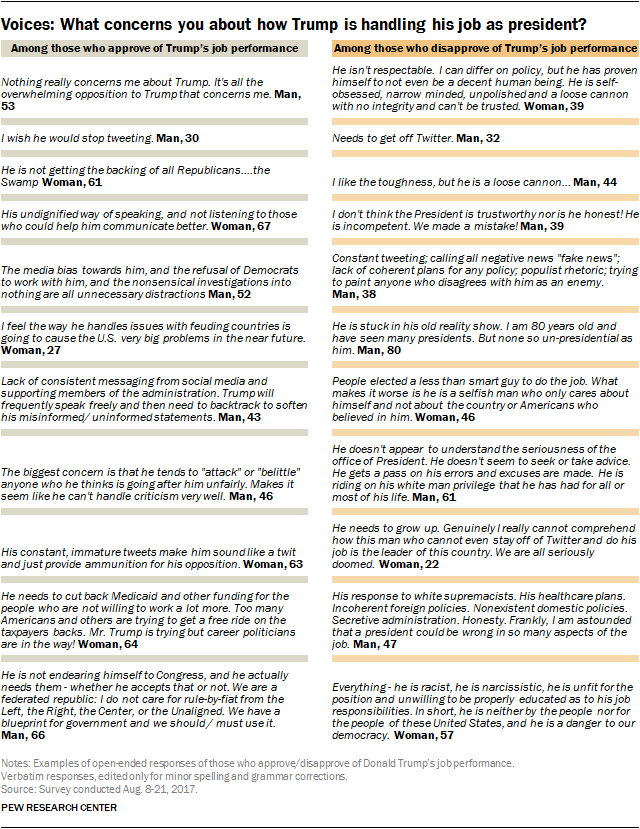 Republicans Divided in Views of Trump’s Conduct; Democrats Are Broadly Critical 1. Views of Trump’s presidential conduct, handling of issues
2. In their own words: Likes and concerns about Trump
Trump’s conduct – and Twitter use – cited by the public as a concern
Methodology