Asked to name the biggest problem with government today, many cite Congress, politics, or a sense of corruption or undue outside influence. At the same time, large majorities of the public view elected officials as out of touch, self-interested, dishonest and selfish. And a 55% majority now say that ordinary Americans would do a better job at solving the nation’s problems than their elected representatives.

The 2016 campaign is on pace to break records for campaign spending. A large majority of Americans (76%) – including identical shares of Republicans and Democrats – say money has a greater role on politics than in the past. Moreover, large majorities of both Democrats (84%) and Republicans (72%) favor limiting the amount of money individuals and organizations can spend on campaigns and issues. 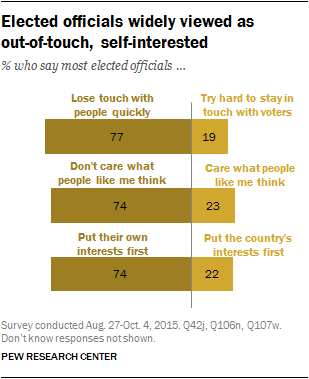 These views are widely held across the political spectrum, though conservative Republicans and Republican leaners are particularly likely to say elected officials are self-interested: 82% say this, compared with 71% of moderate and liberal Republicans, and similar proportions of conservative and moderate (69%) and liberal (73%) Democrats. 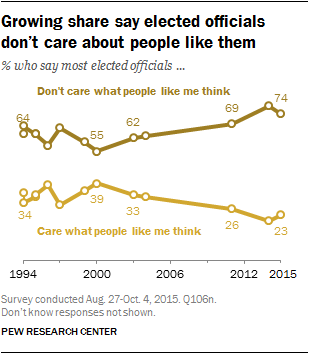 Majorities across party lines say politicians don’t care much about what they think, though as has been the case since 2011, more Republicans than Democrats currently say this (78% vs. 69%). In 2004, when both the presidency and Congress were held by the GOP, Democrats (71%) were more likely than Republicans (54%) to say elected officials in Washington didn’t care much about them. Throughout much of the late 1990s, there were no significant partisan differences in these views. 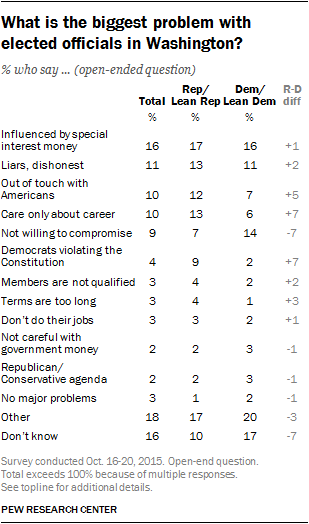 When asked to name in their own words the biggest problem they see with elected officials in Washington, many Americans volunteer issues with their integrity and honesty, or mention concerns about how they represent their constituents.

The influence of special interest money on elected officials tops the list of named problems; 16% say this. Another 11% see elected officials as dishonest or as liars. These concerns are named by similar proportions of Republicans and Democrats.

One-in-ten respondents (10%) say elected officials are out of touch with Americans, and another 10% say they only care about their political careers. Republicans and Republican-leaning independents are slightly more likely than Democrats to name these as problems.

In contrast, Democrats are twice as likely as Republicans to volunteer that the biggest problem with elected officials is that they are not willing to compromise (14% vs. 7%).

To the general public, elected officials in Washington are not much different from the typical American when it comes to their intelligence or their work ethic, but they are viewed as considerably less honest, somewhat less patriotic and somewhat more selfish. 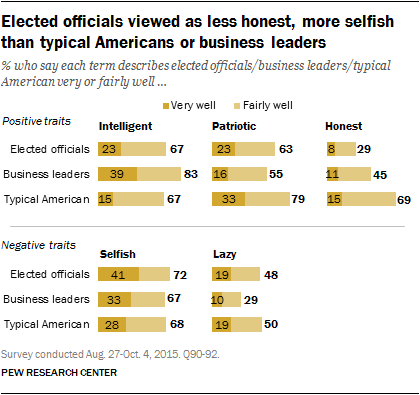 About half of Americans say elected officials (48%) and average Americans (50%) are lazy; just 29% say this about business leaders. 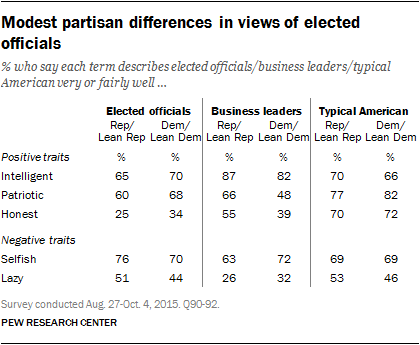 Views of elected officials and views of government 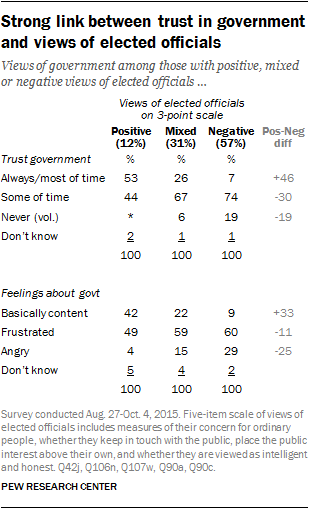 Compromising with the other party 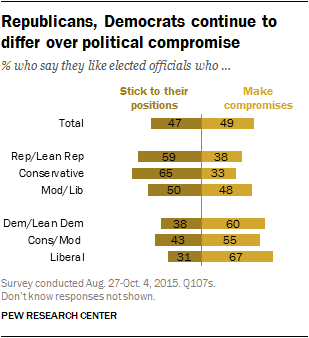 Among partisans and leaning independents, though, there is a clearer preference. Nearly six-in-ten Republicans and Republican leaners (59%) like elected officials who stick to their positions. The preference is especially strong among conservative Republicans, 65% of whom say this.

In contrast, 60% of Democrats and Democratic leaners prefer elected officials who make compromises over those who stick to their positions. Two-thirds of liberal Democrats (67%) agree. This ideological divide over compromise in principle is little different today from in recent years. 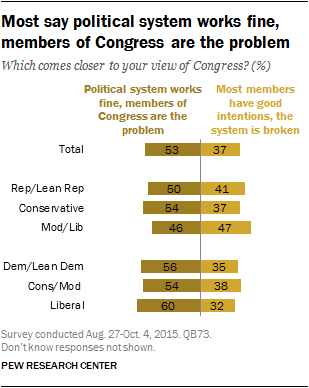 There are only modest partisan or demographic differences on this question, though moderate and liberal Republicans and leaners are somewhat more likely than other partisan and ideological groups to say problems are systemic (47% say this, compared with no more than 38% of those in other ideological groups).

Views of the role of money in politics

The vast sums of money flowing into the 2016 presidential election have once again brought attention to the issue of campaign finance. 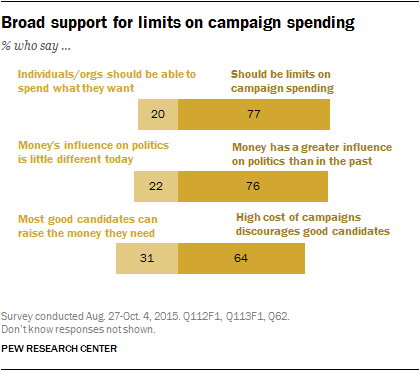 Broad concerns about money in politics – and the specific worry that costly campaigns discourage worthy candidates – are not new. In a January 1988 face-to-face survey, 64% said the high cost of campaigns acts as a barrier to many good candidates.

Opinions on campaign finance and its effects on the political system are widely shared; majorities across demographic and partisan groups say there should be limits on campaign spending, that money’s impact on politics has increased and that the high cost of campaigns is driving away good candidates. 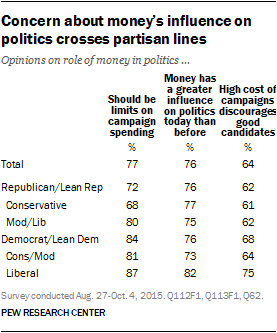 Partisan differences on all three measures are modest. Republicans and Republican-leaning independents (72%) are less likely than Democrats and Democratic-leaning independents (84%) to say that there should be limits on campaign spending. However, support for spending limits is high even among conservative Republicans and leaners –roughly two-thirds (68%) think there should be limits on how much individuals and organizations can spend.

Democrats and leaners are somewhat more likely to say that the high cost of campaigns today discourages good candidates: 68% say this compared with 62% of Republicans and leaners. 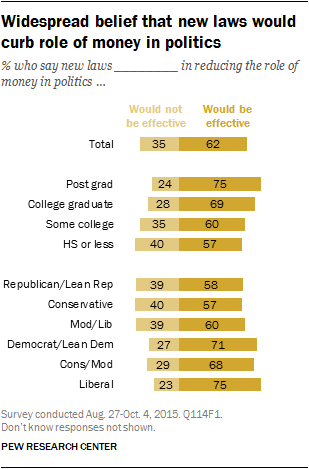 While most Americans believe that new laws would be effective in reducing the role of money in politics, there are educational and partisan differences in how widely these views are held.

Fully three-quarters of those with post-graduate degrees say new laws would be effective in this regard, compared with 57% of those with no more than a high school education.

Next: 7. Views of the political parties and how they manage government
← Prev Page
Page4Page5Page6You are reading page7Page8Page9Page10Page11Page12Page13Page14
Next Page →