Since the late 1990s, the public’s feelings about the federal government have tended more toward frustration than either anger or contentment. That remains the case today: 57% feel frustrated with the government, while smaller shares either feel angry (22%) or are basically content (18%).

Yet while the public’s sentiments about government have not changed dramatically, Americans increasingly believe the federal government is in need of sweeping reform. Fully 59% say the government needs “very major reform,” up from 37% in 1997.

Overall attitudes about government – from the feelings it engenders to views of its performance and power – are deeply divided along partisan lines. And, like public trust in government, the partisan tilt of these opinions often changes depending on which party controls the White House. However, it is notable that on several measures, including perceptions of whether government is a “friend” or “enemy,” Republicans are far more critical of government today than they were during the Clinton administration.

More are frustrated than angry at government 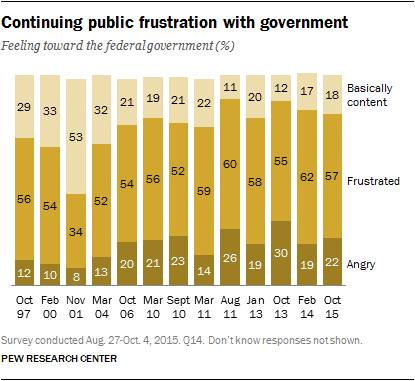 Anger at government is more widespread today than it was in the 1990s. Only on rare occasions, however, do more than about a quarter of Americans express anger at the federal government.

Since the late 1990s, majorities have expressed frustration with the federal government – with one notable exception. In November 2001, during the period of national unity that followed the 9/11 terrorist attacks, 53% said they were basically content with the federal government, while just 34% expressed frustration (and only 8% said they were angry). 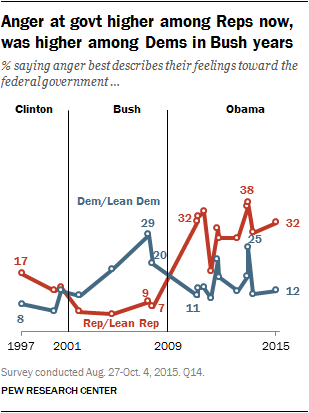 Currently, 32% of Republicans and Republican-leaning independents say they are angry at the federal government, compared with 12% of Democrats and Democratic leaners. The share of Republicans who are angry at government has declined since the fall of 2013 (from 38%); over the same period, anger among Democrats has fallen by about half (from 25% to 12%). 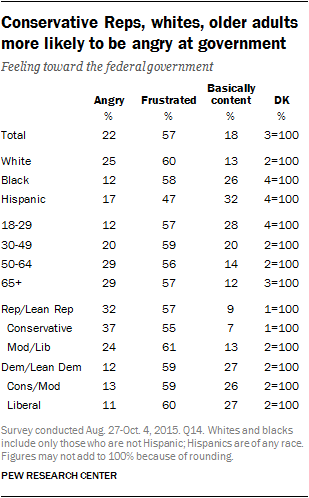 Among demographic groups, whites and older Americans are especially likely to express anger at the government. A quarter of whites say they are angry at the federal government, compared with 17% of Hispanics and 12% of blacks.

Asked to name in their own words the biggest problem with the government in Washington, 13% specifically mention Congress, including 11% who cite gridlock or an inability to compromise within the institution. Nearly as many (11%) name politics and partisanship, while 7% mention the size or scope of government and 6% cite corruption. 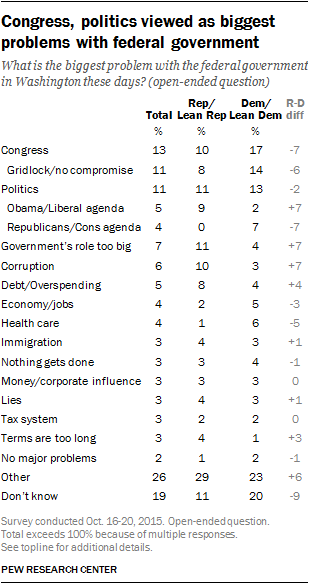 Democrats and Democratic-leaning independents are more likely to name Congress than are Republicans: 17% of Democrats say this, compared with 10% of Republicans.

Among those who call out politics as the biggest problem, several specifically mention those in the opposing party: 9% of Republicans name Barack Obama, Democrats or a “liberal agenda” as the main problem, while 7% of Democrats point to Republicans or a “conservative agenda.”

Overall, just 5% of the public cites debt or overspending as the biggest problem with the federal government, while 4% each mention the economy or jobs and health care.

More Republicans (8%) than Democrats (4%) name the deficit and fiscal irresponsibility as the leading problem, while Democrats are somewhat more likely to mention health care (6% vs. 1%). 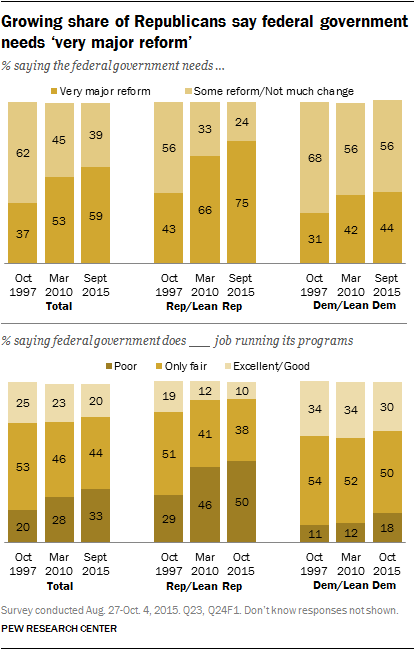 Today, 59% say it needs very major reform, while only 39% say the federal government needs little or no change.

Most of the change since the late 1990s has come among Republicans: Fully 75% of Republicans and leaners now say the federal government needs very major reform, up from 43% in 1997 and 66% five years ago. The share of Democrats saying the government is in need of sweeping reform has risen more modestly since 1997 – 44% now, 31% then – and has barely changed since 2010 (42%).

The public’s overall rating of the government’s performance also has become more negative. Most Americans now say the federal government is doing either an only fair (44%) or poor (33%) job running its programs; just 20% give it an excellent or good rating on this measure.

In 2010, 28% gave the government a “poor” rating for handling programs and 20% did so in 1997. As is the case in views of government reform, the increase in poor ratings for government performance have come almost entirely among Republicans.

Among Democrats and leaners, only 18% currently say the federal government does a poor job running its programs, which reflects just a 7-percentage-point increase since 1997. Half of Democrats (50%) rate government’s performance as only fair, while 30% say it does an excellent or good job.

Is government a ‘friend’ or ‘enemy?’ 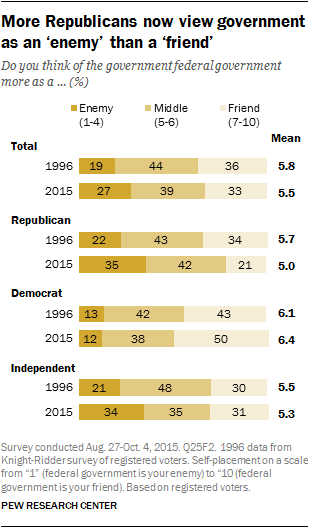 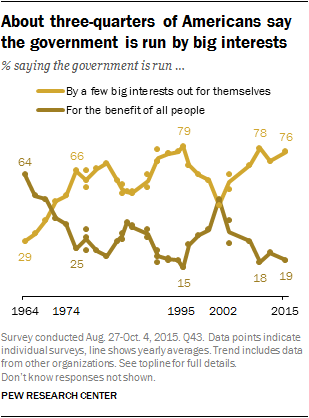 About three-quarters of the public (76%) say the federal government is “run by a few big interests,” while only 19% say the government “is run for the benefit of all the people.” This view is little changed over the past five years, and is on par with views in the early 1990s.

The belief that government is run by a few big interests spans all demographic and partisan groups. Majorities in both parties now say that a few big interests run the government, though this view is somewhat more widely held among Republicans and Republican-leaning independents (81% say this) than among Democrats and Democratic-leaning independents (71%).

Size and scope of government 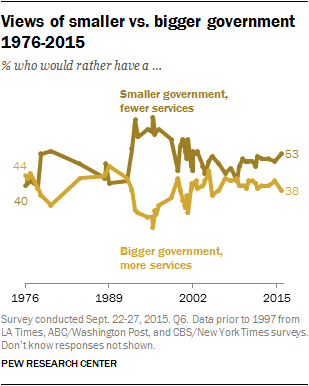 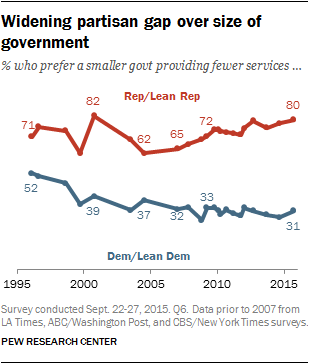 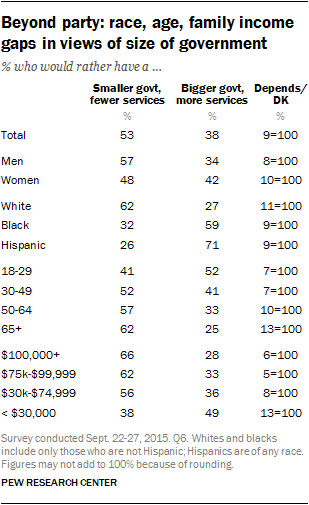 By more than two-to-one (62% to 27%), whites prefer a smaller government that provides fewer services. A majority of blacks (59%) – and an even larger share of Hispanics (71%) – favor a larger government with more services.

Lower-income households stand out for their support of bigger government: 49% of those with family incomes of less than $30,000 prefer larger government, the highest share of any income category. 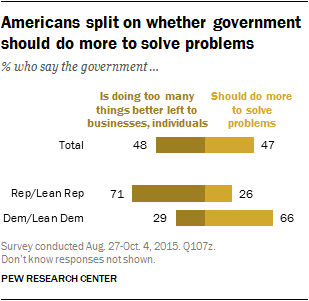 Government viewed as ‘wasteful and inefficient’

The perception of government as wasteful and inefficient has endured for decades. But partisan views of government wastefulness, like trust in government, change depending on which party controls the White House.

Overall, 57% of Americans say that “government is almost always wasteful and inefficient,” while 39% say it “often does a better job than people give it credit for.” This balance of opinion is largely unchanged over the past decade.

As a career, government viewed as more appealing than politics

Though many Americans express anger or frustration about the federal government, nearly half (48%) say if they had a son or daughter finishing school they would like to see them pursue a career in government. 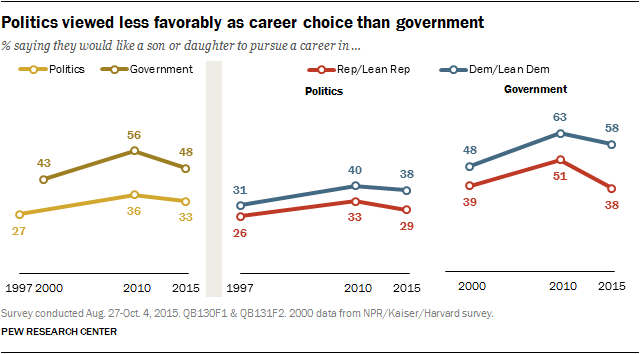 Since 1997, Democrats have viewed both political and governmental careers more favorably than Republicans. Though just 38% of Democrats and Democratic leaners would like to see a son or daughter pursue a career in politics, that number falls to 29% among Republicans and Republican leaners.

But partisans are further apart on views about a career in government. Today, a 58% majority of Democrats say they would like to see a child work in government, while just 38% of Republicans say this, a wider partisan divide on this question than in the past.

Next: 3. Views of government's performance and role in specific areas
← Prev Page
Page1Page2You are reading page3Page4Page5Page6Page7Page8Page9Page10
Next Page →

Beyond Distrust: How Americans View Their Government 1. Trust in government: 1958-2015
2. General opinions about the federal government
More are frustrated than angry at governmentBiggest problem with government? Congress, politics cited most oftenMost say the government needs sweeping reformsIs government a ‘friend’ or ‘enemy?’Few think the government is run ‘for the benefit of all people’Size and scope of governmentGovernment viewed as ‘wasteful and inefficient’As a career, government viewed as more appealing than politics
3. Views of government's performance and role in specific areas 4. Ratings of federal agencies, Congress and the Supreme Court 5. Political engagement and views of government 6. Perceptions of elected officials and the role of money in politics 7. Views of the political parties and how they manage government 8. Perceptions of the public's voice in government and politics 9. Views of the nation, how it's changing and confidence in the future 10. Government and taxes 11. How government compares with other national institutions Methodology Appendix A: Why partisans include 'leaners'