Congress remains very unpopular with the public: Just 27% of the public views Congress favorably, while 69% have an unfavorable opinion. Favorable opinions of Congress have not surpassed 30% in more than four years.

Opinions of the Supreme Court have changed little since July, when negative opinions of the court reached a 30-year high. Currently, 50% view the court favorably, while 42% express an unfavorable opinion.

Among the government agencies and departments included in the survey, the U.S. Postal Service is viewed most favorably; fully 84% have a favorable opinion of the Postal Service, while just 14% have an unfavorable view.

Two-thirds or more also have favorable impressions of the National Park Service (75%), the Centers for Disease Control and Prevention, or CDC (71%), NASA (70%) and the FBI (68%). No more than about one-in-five express negative views of any of these agencies.

By about two-to-one, the public also has favorable views of the Department of Homeland Security (64% vs. 30% unfavorable), the Defense Department (63% vs. 29%) and the CIA (57% vs. 27%). The National Security Agency is viewed less positively – about half (52%) have a favorable impression of the NSA, while 31% view it unfavorably.

Of the 17 agencies and departments in the survey, the Department of Justice (46%), the Department of Education (44%), the IRS (42%) and the VA (39%) receive among the lowest favorability ratings. Roughly half have unfavorable impressions of all four organizations. 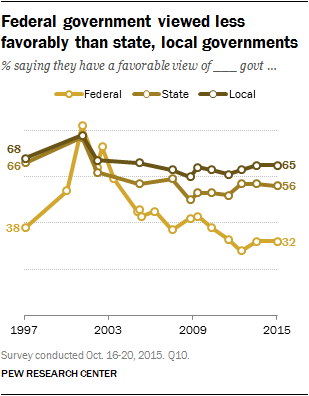 VA’s problems take a toll on its image 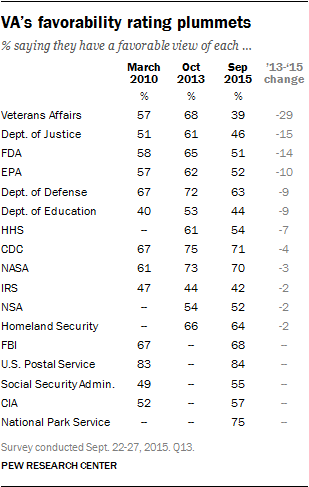 Favorable ratings for the IRS have changed little in recent years. But the VA’s favorability has plummeted over the past two years, while several other agencies – including the Justice Department, Food and Drug Administration (FDA), Environmental Protection Agency (EPA), Defense Department and Department of Education – also are viewed less positively.

Currently, just 39% view the VA favorably – a decline of 29 percentage points since October 2013, during the partial government shutdown. The VA has faced intense criticism over problems with its health care services for veterans, and last year Gen. Eric Shinseki, the agency’s embattled secretary, resigned under pressure.

The Justice Department is viewed less favorably than it was during the 2013 government shutdown: 64% now view the department favorably, down 15 points from two years ago. However, the current measure is comparable to the department’s favorable rating in 2010 (51%). Favorable ratings for the FDA (down 14 points), EPA (10 points), Defense Department and Department of Education (9 points each) also have declined significantly since October 2013.

Partisan differences in views of federal departments and agencies 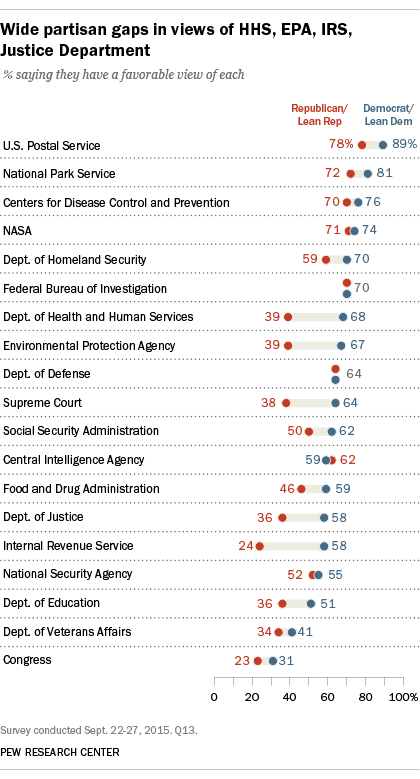 There are substantial partisan gaps in the views of several federal departments and agencies. Roughly two-thirds of Democrats and Democratic leaners have favorable impressions of the Department of Health and Human Services, or HHS (68%), and the EPA (67%). Only about four-in-ten Republicans and Republican leaners view these agencies favorably (both 39%).

And more than twice as many Democrats (58%) as Republicans (24%) have a favorable opinion of the IRS.

Democrats also view several other departments and agencies more favorably – including the Department of Education (51% of Democrats vs. 36% of Republicans), the FDA (59% vs. 46%), the Social Security Administration (62% vs. 50%) and the Department of Homeland Security (70% vs. 59%).

Members of both parties view the Justice Department less favorably than in 2013: 36% of Republicans and Republican leaners currently view the department favorably, down from 50% two years ago. Among Democrats and Democratic leaners, the decline has been comparable (to 58% from 71%). 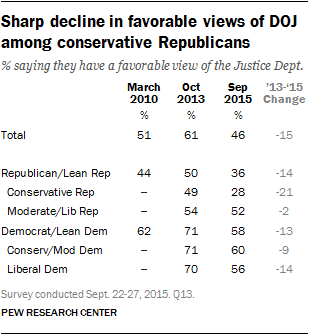 The shift in Republicans’ views has come almost entirely among conservative Republicans. Just 28% now view the Justice Department favorably, down 21 percentage points from October 2013. By contrast, about half of moderate and liberal Republicans (52%) have a favorable impression of the department, about the same as did so two years ago (54%). Among Democrats, the decline in favorable opinions has come among both liberals (14 points) and the party’s conservatives and moderates (9 points).

Notably, the steep decline in the VA’s favorability ratings has come across the partisan and ideological spectrum. Today, just 41% of Democrats and 34% of Republicans view the VA favorably, down 29 points and 34 points, respectively, since October 2013. 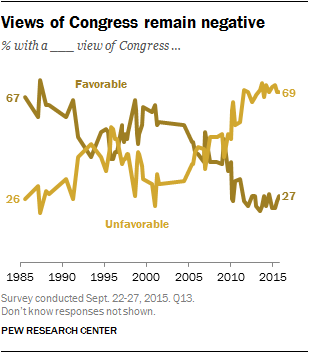 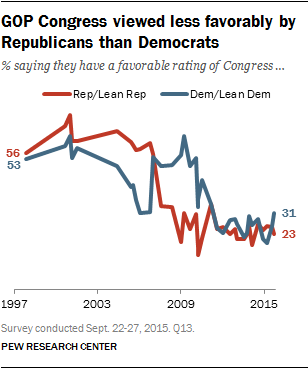 Opinions about Congress remain overwhelmingly negative. Just 27% have a favorable opinion of Congress, while 69% have an unfavorable view. Views of Congress have changed little over the past four years. (This question was asked in late September, as John Boehner announced he was resigning as House speaker. Rep. Paul Ryan was elected speaker Oct. 29.)

Despite Republicans controlling both the House of Representatives and Senate, just 23% of Republicans and Republican leaners view Congress favorably, compared with 31% of Democrats and Democratic leaners. This marks the first time – in data reaching back about two decades – that members of the party with a majority in both houses of Congress have expressed less favorable views of the institution than members of the minority party. 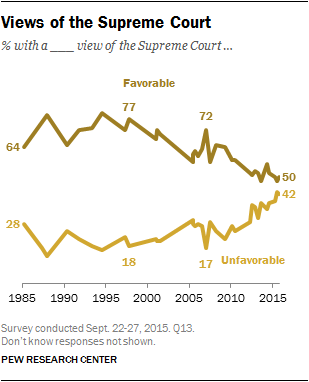 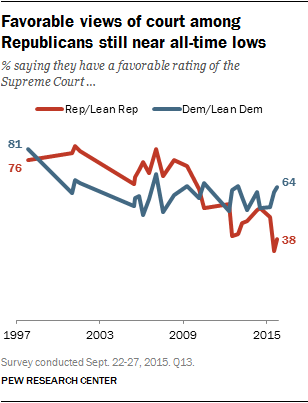 In July, unfavorable opinions of the Supreme Court reached a 30-year high of 43%, following the court’s contentious, end of-term rulings on the Affordable Care Act and same-sex marriage. Since then, opinions about the court are largely unchanged: 50% view the court favorably, while 42% view it unfavorably.

Just 38% of Republicans and Republican leaners view the Supreme Court favorably, up slightly from an all-time low of 33% in July. By contrast, 64% of Democrats and Democratic leaners have a favorable impression of the high court, little changed from July (61%).

Next: 5. Political engagement and views of government
← Prev Page
Page4You are reading page5Page6Page7Page8Page9Page10Page11Page12Page13Page14
Next Page →

Beyond Distrust: How Americans View Their Government 1. Trust in government: 1958-2015 2. General opinions about the federal government 3. Views of government's performance and role in specific areas
4. Ratings of federal agencies, Congress and the Supreme Court
VA’s problems take a toll on its imagePartisan differences in views of federal departments and agenciesViews of Congress and the Supreme Court
5. Political engagement and views of government 6. Perceptions of elected officials and the role of money in politics 7. Views of the political parties and how they manage government 8. Perceptions of the public's voice in government and politics 9. Views of the nation, how it's changing and confidence in the future 10. Government and taxes 11. How government compares with other national institutions Methodology Appendix A: Why partisans include 'leaners'