Similarly, on a core question about government performance, a 57% majority of Democrats say “government often does a better job than people give it credit for,” while 40% say it is “almost always wasteful and inefficient.” In contrast, Republicans say the government is wasteful by about three-to-one (75% vs. 22%). 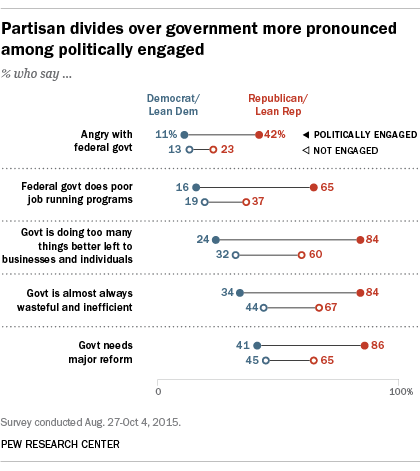 But these partisan divides over government, already wide, are particularly stark among those who are most politically engaged.

The end result is that partisan cleavages over government are even more pronounced among those who are the most likely to participate in the political process, echoing a growing link between engagement and broader ideological polarization. 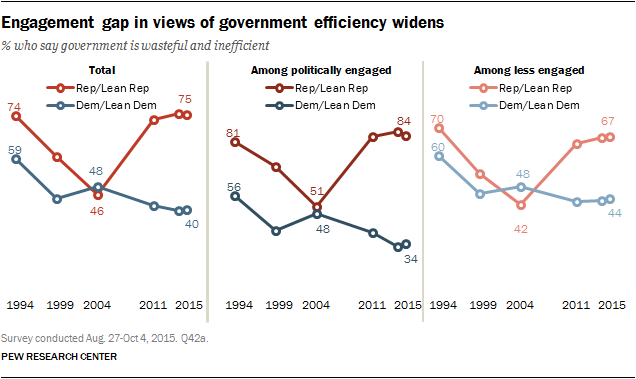 This dynamic is not new – engaged Republicans have consistently been more critical of government than other Republicans – but it is as pronounced as ever. On the question of whether government is wasteful and inefficient or does a better job than people give it credit for, there is now a 50-percentage-point partisan gap among engaged partisans, compared with a 23-point gap between less-engaged Democrats and Republicans.

Politically engaged also divided over role and performance of government

For example, while 70% of politically engaged Democrats say the government is doing a good job strengthening the economy, just 23% of engaged Republicans say this, a 47-point gap. Among those who are less engaged, that gap narrows to 24 points, largely the result of more positive assessments of government performance on this dimension among less-engaged Republicans. 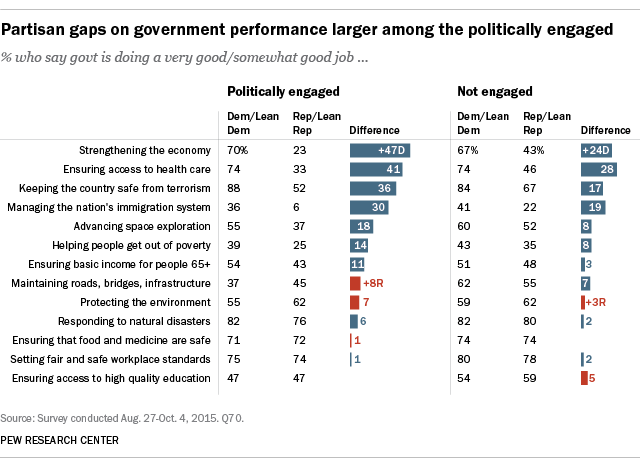 Similar patterns are at work when it comes to government’s performance on health care and terrorism. This is also seen, to a lesser extent, on views of the government’s handling of immigration, space exploration, poverty and ensuring a basic income for older Americans.

Notably, ratings of the government’s performance maintaining roads, bridges and other infrastructure follows a very different pattern, a result of much lower ratings of government performance among the politically engaged in both parties – particularly Democrats.

But the extent to which engaged partisans are more divided than those who are less engaged is even more apparent when it comes to the role the government should play in each of these 13 areas. In five of the 13 areas asked about in the survey, there are gaps of 40 percentage points or more between engaged Democrats and engaged Republicans. 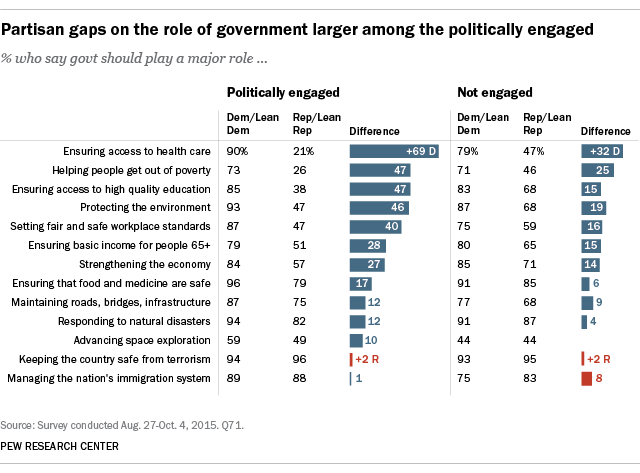 However, on several key areas of government activity, there is broad agreement even among engaged partisans that government should play a major role: Two-thirds or more of Republicans and Democrats, engaged and less-engaged alike, say government should play a major role in keeping the country safe from terrorism, managing the immigration system, responding to natural disasters, ensuring the safety of food and medicine and maintaining the nation’s infrastructure.

Next: 6. Perceptions of elected officials and the role of money in politics
← Prev Page
Page4Page5You are reading page6Page7Page8Page9Page10Page11Page12Page13Page14
Next Page →

Beyond Distrust: How Americans View Their Government 1. Trust in government: 1958-2015 2. General opinions about the federal government 3. Views of government's performance and role in specific areas 4. Ratings of federal agencies, Congress and the Supreme Court
5. Political engagement and views of government
Politically engaged also divided over role and performance of government
6. Perceptions of elected officials and the role of money in politics 7. Views of the political parties and how they manage government 8. Perceptions of the public's voice in government and politics 9. Views of the nation, how it's changing and confidence in the future 10. Government and taxes 11. How government compares with other national institutions Methodology Appendix A: Why partisans include 'leaners'