The public continues to view the Democratic Party more favorably than the Republican Party. But neither party has a significant advantage when it comes to opinions about which could better manage the federal government. 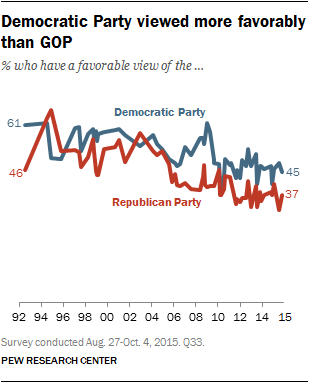 In addition, both parties are criticized for how they deal with the size and scope of government. Nearly six-in-ten (59%) say the Republican Party is too willing to cut government programs even when they work. An identical percentage says the Democratic Party too often sees government as the only way to solve problems.

The favorable rating for the Democratic Party has changed little since the start of the year: Currently, 45% view the Democratic Party favorably, while 50% view it unfavorably. Meanwhile, the GOP’s image has improved somewhat since July, when just 32% viewed the party favorably – among the lowest favorability ratings in two decades of polling. Still, in the current survey, just 37% view the Republican Party favorably, while 58% view it unfavorably. 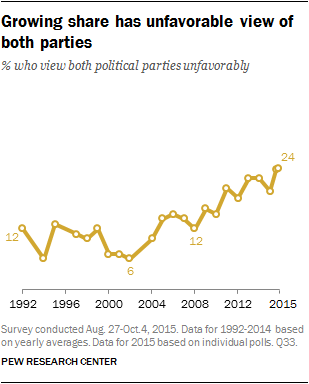 Most of the growth in unfavorable opinions of both parties has come among Republicans and Republican-leaning independents, and among the 13% of the public that does not lean to either political party. 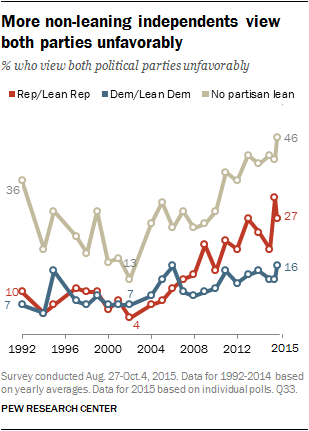 Independents without partisan leanings are the group most likely to have negative views of both parties. Close to half (46%) of non-leaning independents now say they have an unfavorable view of both the Republican and Democratic parties. That is almost double the percentage who said this in 2008 (25%). 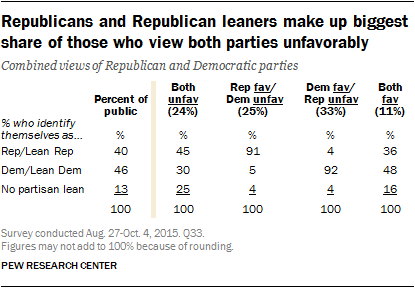 Predictably, those who have a favorable view of one party and an unfavorable one of the other are overwhelmingly partisans and partisan leaners. Among the small share of the public (11%) that sees both parties favorably, Democrats make up the largest share (48%).

Views of the parties’ approaches to government 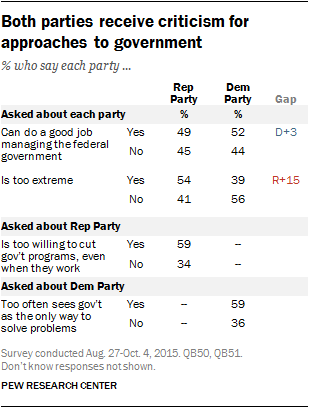 As in the past, more Americans view the Republican Party as “too extreme” (54%) than say that description applies to the Democratic Party (39%).

The survey also asks about specific criticisms of the parties’ approaches to governing. A majority (59%) says that the Democratic Party “too often sees government as the only way to solve problems,” while an identical percentage says that the Republican Party “is too willing to cut government programs, even when they work.”

As might be expected, Republicans and Democrats in large numbers give their own party positive ratings for dealing with the federal government. 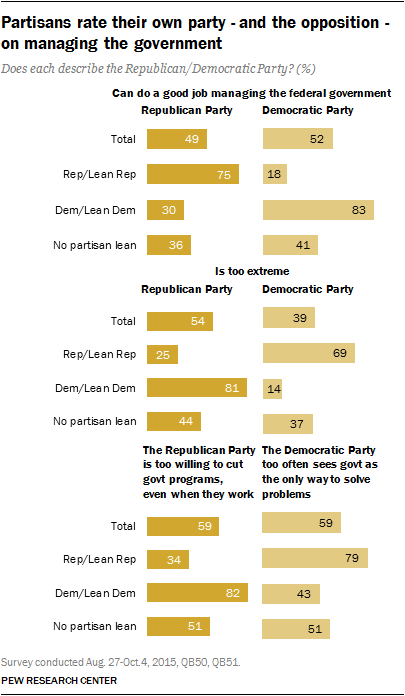 When asked if the Democratic Party too often sees government as the solution to problems, 43% of Democrats and Democratic leaners say this is the case. When asked to judge whether the GOP is too quick to cut working programs, a somewhat smaller share of Republicans and Republican leaners (34%) say this is true of their party.

For their part, independents who do not lean to either party offer similar assessments of the Republican and Democratic parties on all of the items tested. On the critiques of each party’s approach to government, for instance, non-leaning independents are as likely to say that the GOP is too quick to cut effective government programs as they are to say that the Democratic Party is too reliant on government to solve problems (51% each). 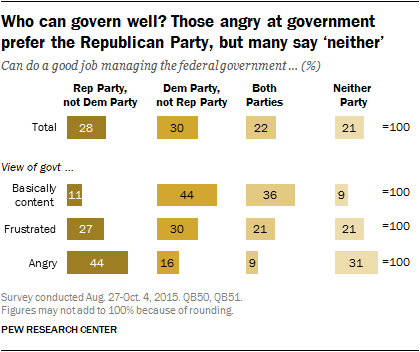 Differences between the two major parties 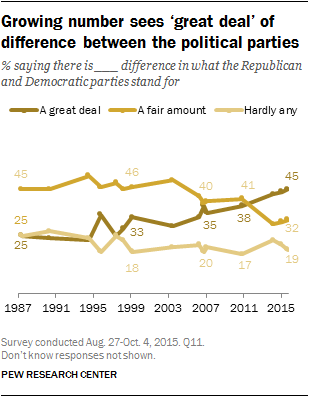 The share of Americans who say there are major differences between the political parties, while little changed from early last year, remains as high as it has ever been. 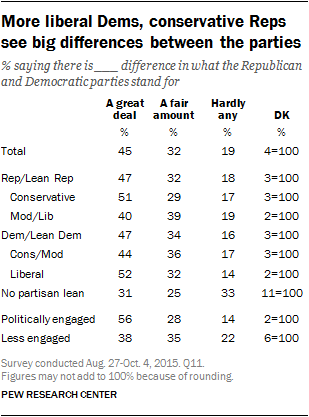 Most see a politically divided nation

An overwhelming majority of Americans say that the country is now more politically divided than in the past – and few expect these divisions to go away anytime soon. 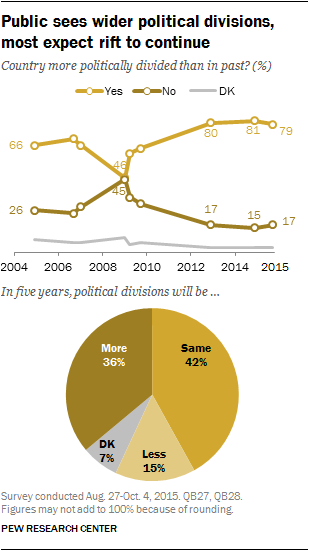 Currently, 79% view the country as more politically divided, little different from surveys in 2013 (81%) and 2012 (80%), but as high as at any point since the question was first asked more than 10 years ago. In January 2009, shortly before Barack Obama took office, just 46% said the country was more politically divided than it had been in the past.

When asked to look five years ahead, 78% say that either the country will be just as politically divided as it is now (42%), or more divided (36%).

There is broad agreement across partisan and demographic groups that the country is more politically divided, and that these divisions will persist – or deepen – over the next five years.

Comparable percentages of Republicans and Republican leaners (82%) and Democrats and Democratic leaners (78%) say that the country is more politically divided than in the past. A slightly smaller share of those who do not lean toward either party (72%) say the same.

Next: 8. Perceptions of the public's voice in government and politics
← Prev Page
Page4Page5Page6Page7You are reading page8Page9Page10Page11Page12Page13Page14
Next Page →

Beyond Distrust: How Americans View Their Government 1. Trust in government: 1958-2015 2. General opinions about the federal government 3. Views of government's performance and role in specific areas 4. Ratings of federal agencies, Congress and the Supreme Court 5. Political engagement and views of government 6. Perceptions of elected officials and the role of money in politics
7. Views of the political parties and how they manage government
Views of the parties’ approaches to governmentDifferences between the two major partiesMost see a politically divided nation
8. Perceptions of the public's voice in government and politics 9. Views of the nation, how it's changing and confidence in the future 10. Government and taxes 11. How government compares with other national institutions Methodology Appendix A: Why partisans include 'leaners'