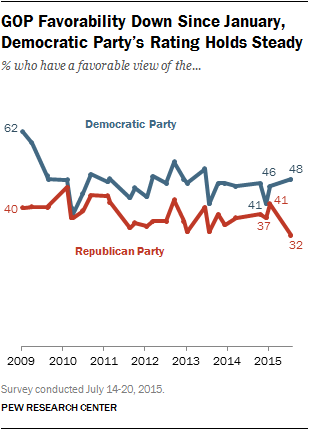 The Democratic Party has often held an edge over the GOP in favorability in recent years, but its advantage had narrowed following the Republicans’ midterm victory last fall. Today, the gap is as wide as it has been in more than two years.

Republicans, in particular, are now more critical of their own party than they were a few months ago. About two-thirds (68%) express a favorable opinion of their party, the lowest share in more than two years. Six months ago, 86% of Republicans viewed the GOP positively. 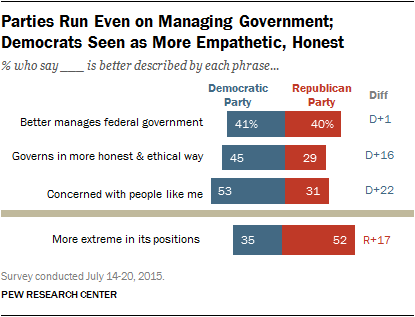 The Democratic Party continues to hold wide advantages over the Republicans on empathy and honesty. By 53% to 31%, the Democratic Party is viewed as “more concerned with the needs of people like me.” And the Democrats hold a 16-point lead on governing in an honest and ethical way (45% to 29%).

Neither party has an edge in perceptions about which could better manage the federal government: 40% say the Republican Party, while an identical percentage prefers the Democrats. 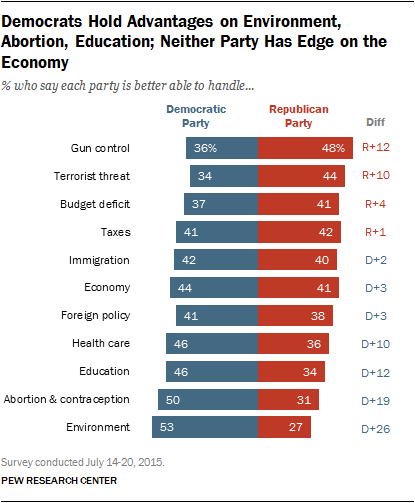 In some cases, such as terrorism and foreign policy, the Republicans have lost ground since January. There has been little change in views of the parties on other major issues, including the economy and immigration. Neither party holds a significant advantage on these issues.

The survey finds little change in Barack Obama’s job approval: 48% approve of the way he is handling his job as president while 45% disapprove. Obama’s rating fell into negative territory at the end of last year, but has been mixed since January.

How Republicans View Their Party 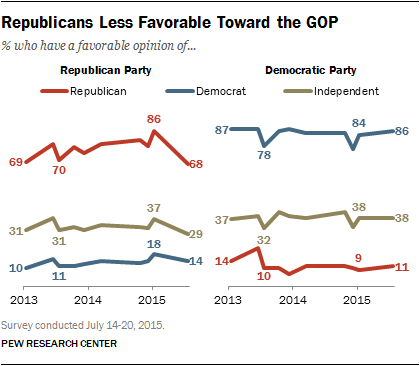 The current survey finds that positive views of the GOP among Republicans have declined 18 percentage points since January, from 86% to 68%. Independents also view the Republican Party less favorably; 29% today, compared with 37% six months ago.

Democrats, by contrast, continue to express highly positive opinions of their party: 86% view the party favorably, little changed from 84% in January. Independents’ views of the Democratic Party also are unchanged since January, at 38%. 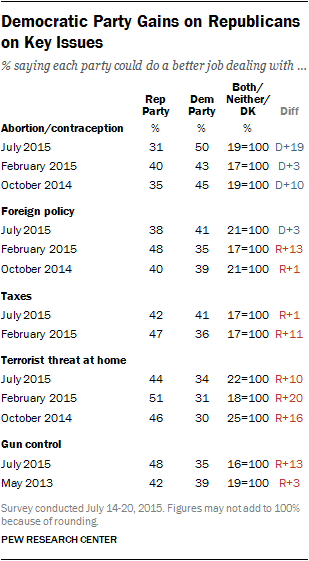 The advantage the Republican Party had on a number of major issues has eroded since earlier this year. On foreign policy, taxes, policies about abortion and contraception, and terrorism the Democratic Party has improved its position since February.

The Democratic Party’s advantage on abortion and contraception has increased 16 points since February; currently 50% say Democrats could do the better job dealing with policies on abortion and contraception, while just 31% say the GOP could. Though these ratings reflect a shift from February (when the parties ran even on this issue), the edge Democrats now hold is similar to its advantage in October 2014.

Five months ago Republicans were seen by more Americans as the party better able to handle foreign policy (48% said Republicans, 35% Democrats); today, the public is equally likely to say Republicans (38%) as Democrats (41%) could better handle foreign policy. And while the GOP maintains a 10-point advantage as the party better able to address the terrorist threat at home (44% vs. 34%), that edge has narrowed since earlier this year.

Over the last two years, the Republican Party has opened a gap over the Democratic Party when it comes to views about which party better reflects Americans’ views about gun control. In May 2013, following months of debate about gun policy, the public was divided over which party could better deal with gun control. Today, the GOP holds a 13-point edge on this issue.

Democrats Hold Edge on Health Care, Neither Party Has Advantage on Economy, Immigration 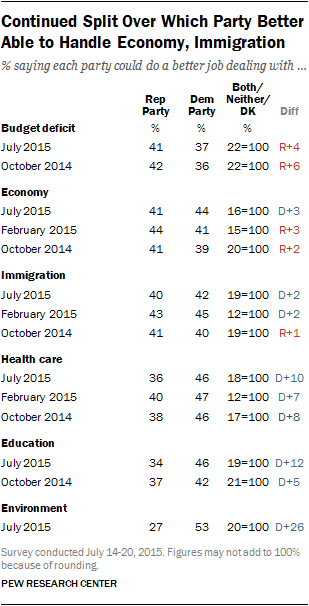 The parties also run even on the budget deficit and immigration, little changed since October of last year. The public has been split over which party is better able to handle immigration for the last several years. 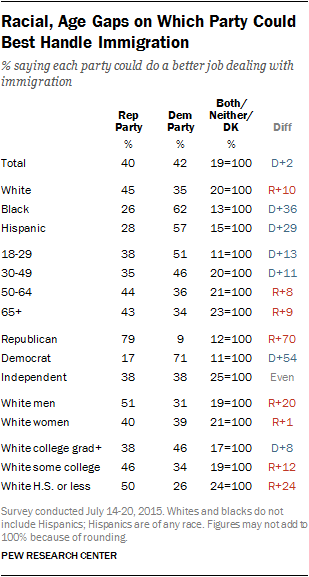 Yet there are substantial divides within whites. While white women are roughly evenly split over which party can better address immigration (39% say Democrats, 40% Republicans), white men favor the GOP by a 20-point margin (51% vs. 31%). 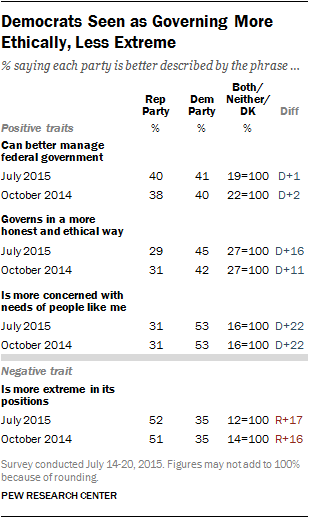 The Democratic Party continues to enjoy an advantage on a number of key traits and qualities, and these views are little changed since last fall. By a 22-point margin, more say the Democratic Party is “more concerned with the needs of people like me.” The Democratic Party has held a similar-sized lead on this trait since 2011, and at least a double-digit edge going back to when this question was first asked more than 25 years ago in 1988.

The Democratic Party also leads the Republican Party as the party that governs in a more honest and ethical way (45% vs. 29%). This balance of opinion is also little changed over the last few years.

As it has been since 2013, the public is divided over which party can best manage the federal government: 41% say the Democratic Party, while 40% say the GOP.

And more Americans identify the Republican Party as “more extreme in its positions” (52% say this, while 35% say the Democratic Party). This view is little changed since 2011. 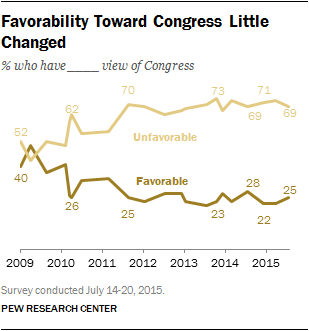 Views of Congress continue to hover near record lows: Just 25% of Americans view Congress favorably, while 69% say they have an unfavorable opinion. 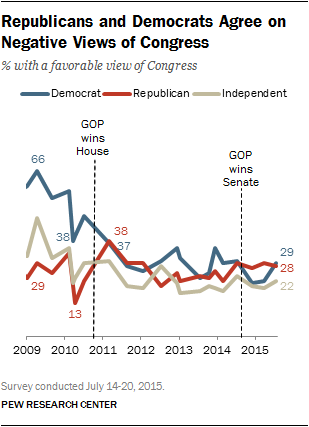 Although the GOP now controls both the House and Senate, Republicans and Democrats hold similar views of Congress: 29% of Democrats and 28% of Republicans rate it favorably. By comparison, Democratic ratings of Congress were consistently higher than Republicans’ ratings when Democrats controlled both chambers from 2007 to 2010.

Republican ratings of Congress are little changed since last summer, but Democratic ratings – which had grown more negative following the 2014 election – have rebounded somewhat (up seven percentage points since March).

Independents’ opinions of Congress are more negative than those in either party. Just 22% say they have a favorable view of Congress, relatively unchanged in recent months.

Obama’s job approval rating is little changed over the first half of 2015, with Americans about equally likely to say they approve of his performance (48%) as disapprove (45%). 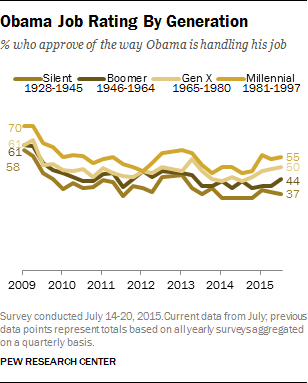 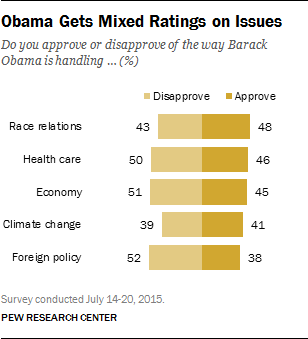 Obama’s approval ratings continue to differ by generation, with younger generations more likely to view his job performance positively. Currently 55% of Millennials (those now ages 18-34) approve of his job performance, as do half of Generation Xers (those 35 to 50). By comparison, 44% of Baby Boomers (51 to 69 year olds) approve of Obama, along with just 37% of those in the Silent Generation (currently ages 70 to 87).

Obama’s performance on foreign policy remains in negative territory, and is little changed over the past few years: Just 38% now approve of how Obama is handling the nation’s foreign policy, while 52% say they disapprove. 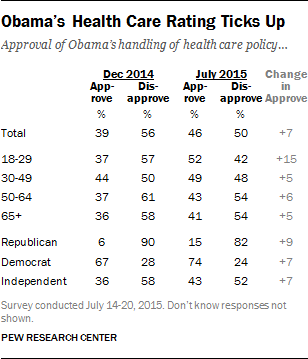 While there has been little change in Obama’s approval ratings on many issues in the last year, his rating on health care policy has improved since December: Today, 46% approve of his handling of health care, up from 39%.

Obama’s rating on health care policy has improved across many political and demographic groups, but the change is particularly pronounced among those under 30: In December, 37% of 18-29 year olds approved of Obama’s handling of health care policy; currently 52% approve.

Obama on Foreign Policy: ‘Not Tough Enough’ for Many Americans 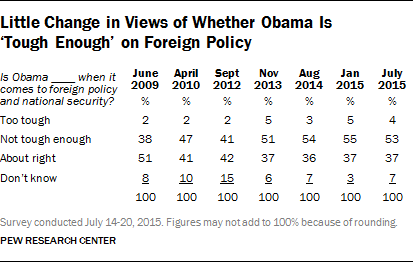 Just over half of Americans (53%) continue to say that Barack Obama’s approach to foreign policy and national security is “not tough enough”; 37% say he handles these matters about right, while just 4% say he is too tough. These attitudes are virtually unchanged since November 2013. 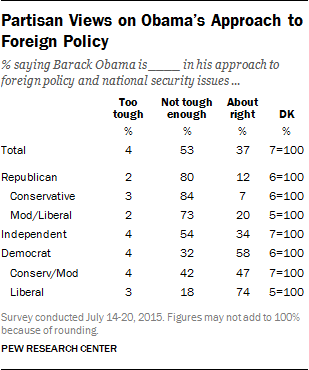