The new Republican-led Congress is drawing harsh reviews from the public – including most Republicans. Just 23% of Americans say congressional Republicans are keeping the promises they made during last fall’s campaign, while 65% say they are not.

On both measures, the public’s views are far more negative than they were of the Democratic-led Congress in March 2007, after the Democrats regained control of both chambers following several years of Republican control. Views are also much more negative than they were in April 1995, shortly after the GOP had gained control of the House and Senate for the first time in four decades.

The new national survey by the Pew Research Center, conducted May 12-18 among 2,002 adults, finds that just 22% approve of the job performance of Republican congressional leaders, little changed since the summer of 2011. Ratings for Democratic congressional leaders are somewhat better (33% approve). 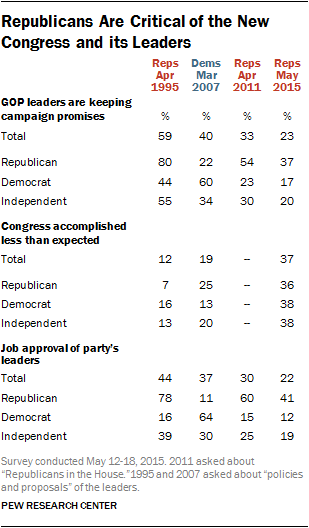 Unlike after some previous partisan turnovers on Capitol Hill, negative assessments of the new Congress now cross party lines. Today, just 41% of Republicans approve of the job their party’s leaders in Congress are doing. By comparison, in April 2011, 60% of Republicans approved of GOP leaders’ job performance and in April 1995, 78% approved of GOP leadership’s policies and proposals.

And just 37% of Republicans say their party’s leaders are keeping their campaign promises, while 53% say they are not. In 2011, after the party won its House majority, 54% said GOP leaders were keeping promises. And in April 1995 — as the Republican-led Congress hit the 100-day milestone — fully 80% of Republicans said this.

Democrats were also relatively upbeat about their party’s leaders at the 100-day mark in 2007, when 60% said Democratic leaders were keeping their campaign promises.

Currently, Republicans (36%) are about as likely as Democrats (38%) or independents (38%) to say Congress is accomplishing less than they expected. 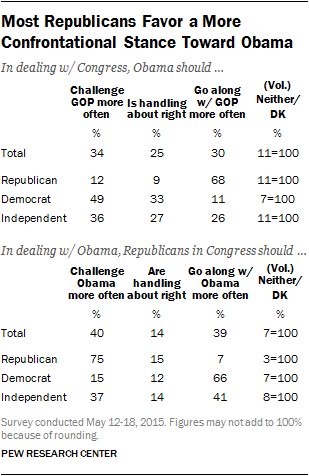 To be sure, public views of Congress overall have been negative for several years, since well before Republicans won control of the Senate last fall or gained control of the House in January 2011. In March, 22% expressed a favorable opinion of Congress; in March 2010, when Democrats still controlled Congress, just 26% had a favorable view.

Fewer Democrats (49%) want Obama to challenge Republicans more often; 33% say he is handling this about right while 11% want him to go along with GOP leaders more often.

Republicans and Republican leaners are more critical of their party on all three issues: 35% say it does well in representing their views on government spending, 34% on illegal immigration and 29% on same-sex marriage.

More say jobs are available locally. About three-in-ten Americans (27%) rate national economic conditions as excellent or good, while 73% say they are only fair (43%) or poor (30%). Economic attitudes also are little changed since the start of the year, but positive views have increased 10 points since April 2014. Over the same period, the percentage saying plenty of jobs are available locally has risen 13 points (from 27% to 40%). 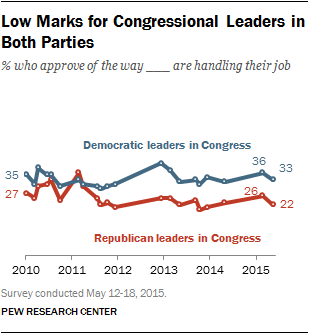 Ratings for the Congressional leadership of both parties have been relatively stable over the past few years. Though the job approval ratings of both GOP and Democratic leadership rose slightly earlier this year, current ratings are now on par with attitudes last spring. 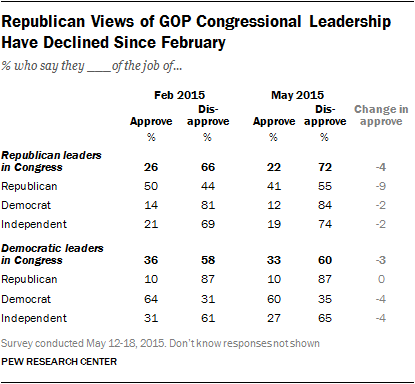 While the overall ratings of Republican congressional leaders over the last few months have dropped a modest four points, Republican ratings of their own party’s leadership have moved in a significantly negative direction over the first few months of a GOP-controlled Congress.

Independent views of the two parties largely track those of the overall public: Just 19% approve of GOP leaders’ job performance, while 27% approve of Democratic congressional leadership.

On a set of three current issues – government spending, illegal immigration and same-sex marriage – rank-and-file Republicans are much more critical of how their party has dealt with each than Democrats are of their own party’s performance. 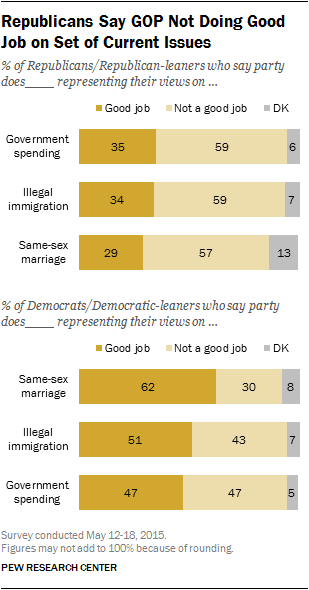 Republican ratings of their party on these issues are no better than they were in a September 2014 survey, prior to the GOP winning control of the Senate in the November midterm elections. 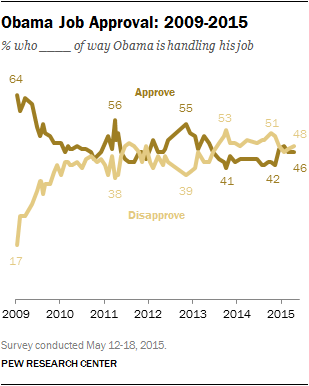 Barack Obama’s overall approval ratings have been stable over the course of 2015. Currently about as many say they approve of the way Barack Obama is handling his job as president as say they disapprove of his job performance (46% vs. 48%). 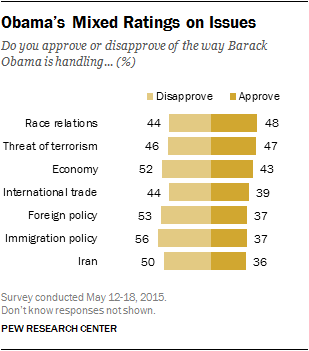 Similar to his overall approval ratings, the public is about evenly divided in its ratings of how Obama is handling race relations (48% approve, 44% disapprove) and the threat of terrorism (47% approve, 46% disapprove).

And a majority of Americans continue to disapprove (56%) of how the president is handling immigration policy.

Obama’s ratings on foreign policy and his handling of Iran are similarly in negative territory. And amid debate over the Trans-Pacific Partnership trade proposal, 39% of respondents say they approve of Obama’s handling of international trade, while 44% say they disapprove; 17% do not offer a rating of his performance on trade. 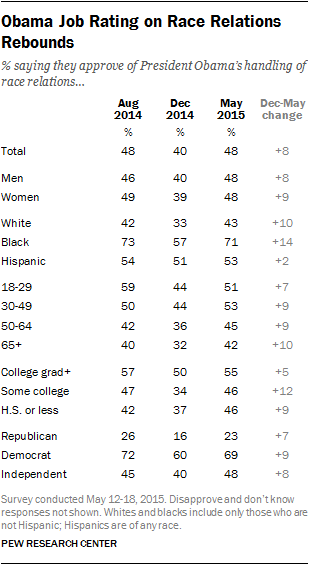 Obama’s handling of race relations is currently one of his better ratings: 48% approve, while 44% disapprove. This is up eight points from December, in a poll conducted in the immediate wake of grand jury decisions not to charge police officers in the deaths of African Americans in Ferguson, Missouri and New York City and the associated protests. Public reactions to how the president is handling race relations are now equal to where they were in August (48% approved).

Obama’s improved rating is seen across most political and demographic groups. About seven-in-ten blacks (71%) now approve of his efforts on race relations, though he ended the year with 57% of blacks giving him a positive rating and 33% a negative one. His marks among blacks are now on par with those of August.

The views of whites are more mixed, with 43% today approving of Obama’s handling of race relations and half (50%) disapproving. This is an improvement from December when most gave him a negative rating (33% approved, 57% disapproved).

Democrats continue to rate Obama highly for his handling of race relations. About seven-in-ten Democrats (69%) – including 80% of liberal Democrats – approve of how he is handling the issue. As with many policy areas, far more Republicans disapprove (71%) than approve (23%) of how Obama handles race relations. The attitudes of independents mirror those of the public overall. 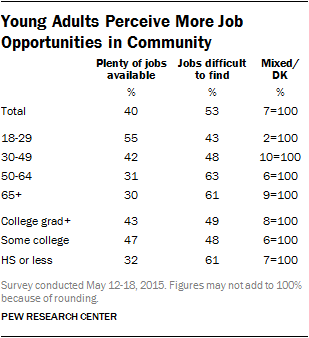 Four-in-ten (40%) currently say there are “plenty of jobs available” in their community, though 53% still see local jobs as difficult to find. The current assessments of job availability continue an upward trend over the last five years and are among the most positive since 2001. In March 2010 — when the unemployment rate was almost 10% — 85% said jobs were difficult to find and just 10% said plenty of jobs were available.

Since April of 2014 there has been a 13-percentage point rise in the share of the public saying there are plenty of jobs available in the local communities.

Ratings of the nation’s overall economic conditions have changed little since the start of 2015 after increasing over the past few years.

Democrats are about twice as likely as Republicans to rate the economy positively. Among Democrats, 36% see conditions as excellent or good and 64% say they are fair or poor; 16% of Republicans say the economy is at least good and 83% say it is fair or poor. And college graduates and higher-income adults are somewhat more positive.

Meanwhile, 53% expect the country’s economic conditions to be the same next year. Somewhat more say the economy will be better (25%) than worse (20%) a year from now. By comparison, many more were optimistic about the future of the economy in the depths of the Great Recession in 2008 and 2009. 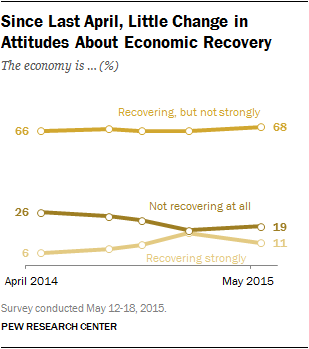 As has been the case for the last year, about two-thirds of the public (68%) say that the economy is recovering, but not strongly. Today, about one-in-ten (11%) see a strong economic recovery; roughly two-in-ten (19%) say the economy isn’t recovering at all. 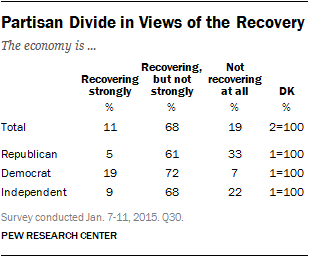 The share saying there is a strong recovery is somewhat lower than it was in January (16% then, 11% today), but remains higher than in April 2014 (when just 6% said the economy was recovering strongly).

Large majorities across partisan lines say there has been a less-than-strong recovery, but those in the GOP are more likely than Democrats to view the situation negatively. One-in-three Republicans (33%) say the economy isn’t recovering at all, compared with 7% of Democrats. On the other hand, more Democrats than Republicans think there is a strong recovery (19% vs. 5%).