The public has very different reactions to the recent grand jury decisions in two police-related deaths that have sparked protests in cities across the country. By 50% to 37%, Americans say a grand jury made the right decision not to charge former Ferguson, Mo., police officer Darren Wilson in the death of Michael Brown. 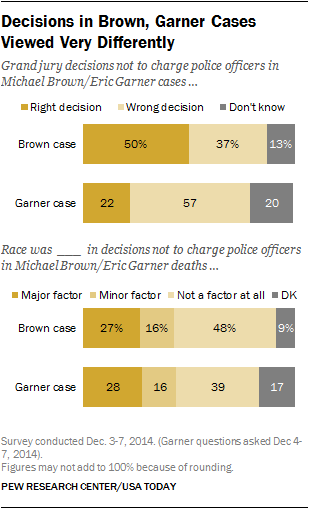 By contrast, a majority (57%) says a grand jury in New York City made the wrong decision in not charging a police officer in the death of Eric Garner. Just 22% viewed that as the right decision.

The latest national survey by the Pew Research Center and USA TODAY, conducted Dec. 3-7 among 1,507 adults, finds that race is not widely viewed as being a major factor in either decision. About a quarter (27%) say race was a major factor in the Brown decision, and 16% say it was a minor factor; about half (48%) say it was not a factor at all in the ruling.

Blacks and whites have starkly different views of the decisions in the Michael Brown and Eric Garner cases, and blacks are far more likely than whites to say that race was a major factor in both rulings. 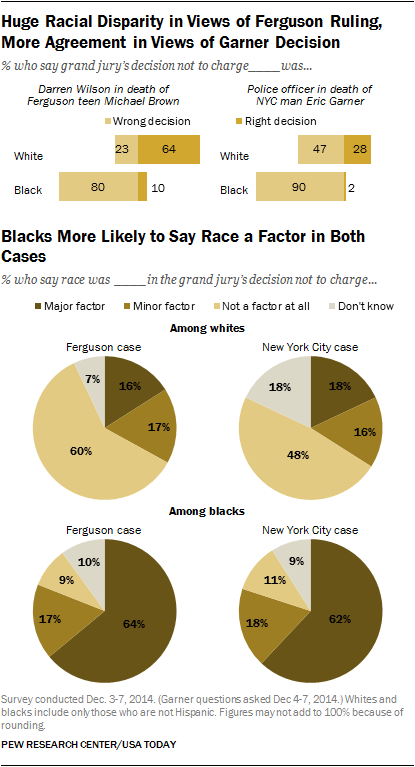 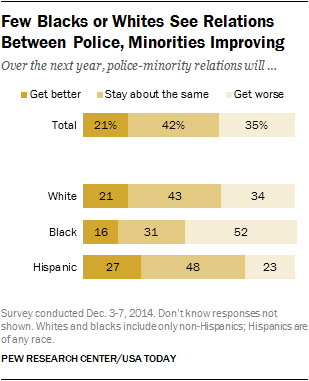 Beyond the racial divisions in immediate reactions to the grand jury decisions, blacks and whites also diverge in opinions about future relations between local police forces and minorities in communities around the country. About half of blacks (52%) expect relations between local police and minorities to get worse over the next year, while just 16% see relations improving; 31% expect them to stay about the same. Among whites, 34% say relations will worsen, while 43% expect them to stay about the same. 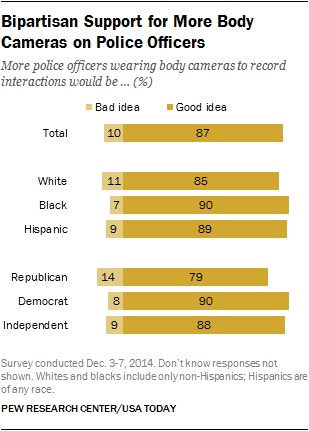 Previous Pew Research center surveys have found that, even before the deaths of Brown and Garner at the hands of the police, blacks expressed far less confidence than whites in local police forces to treat blacks and equally.

There is broad support – across racial groups and among members of both political parties – for the idea of police officers being outfitted with body cameras to record their encounters with people. Fully 87%, including 90% of blacks and 85% of whites, think it is a good idea for police to wear body cameras. 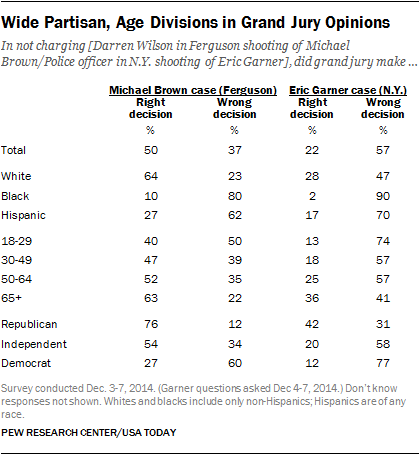 In addition to the racial gaps in opinions about the decisions of grand juries in Missouri and New York, there also are substantial partisan differences.

Republicans and Democrats disagree about both outcomes. Republicans widely support the Ferguson grand jury’s decision (76% right vs. 12% wrong), while most Democrats say it was wrong not to charge Wilson (60% wrong vs. 27% right decision).

There is less support for the decision in the Garner case among both Republicans and Democrats. Still, more Republicans say the New York City grand jury’s decision was right than wrong (42% vs. 31%). Just 12% of Democrats say it was the right decision and 77% think it was wrong.

In reactions to both decisions, younger adults are more critical than older adults. Half of those under 30 (50%) call the Ferguson decision wrong, compared with 22% of adults 65 and older. When it comes to the Garner case, about three-in-four (74%) adults under 30 say the grand jury was wrong, while 41% of those 65 and older say the same.

Race as a Factor in the Cases 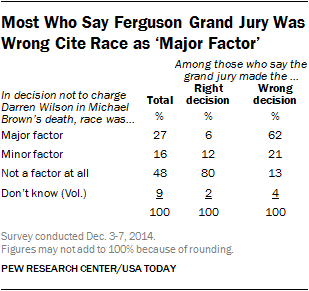 Opinions about whether race was a factor in the Ferguson grand jury case correlates with views of the decision. 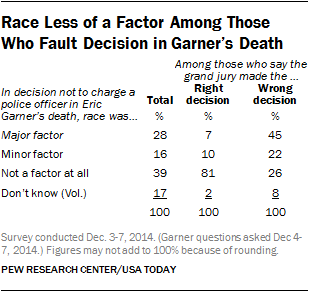 Those who view the decision in Garner’s death as the right one overwhelmingly say race was not a factor in the outcome (81%). Among those who oppose the decision, 45% say that race played a major role in the decision. 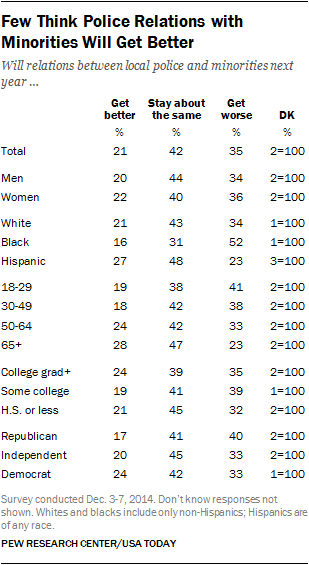 Only about one-in-five Americans (21%) expect relations between local police and minorities to improve over the coming year. Twice as many (42%) say they will stay about the same, while 35% expect them to get worse. 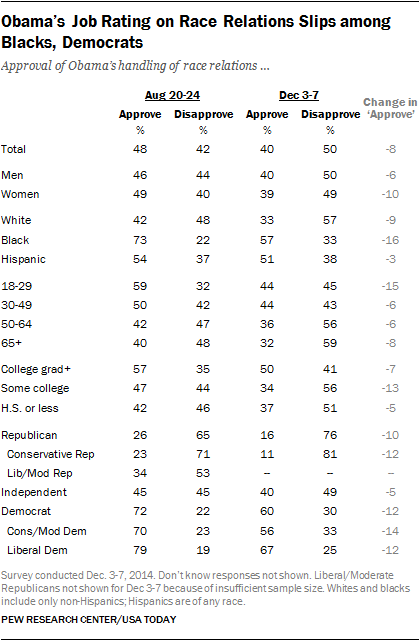 By a margin of 50% to 40%, a greater share of the public disapproves than approves of the way Barack Obama is handling race relations. Obama’s rating on this issue has dropped 8 points since an Aug. 20-24 survey — about two weeks after Brown’s death — when 48% approved and 42% disapproved.

Blacks’ approval of Obama on race relations today outweighs disapproval (57% vs. 33%), but support has dropped 16 points since August. By the opposite margin, more whites disapprove (57%) than approve (33%) of Obama’s handling of race relations.

There has been declining approval of Obama’s handling of race relations among both Democrats (down 12 points to 60%) and Republicans (down 10 points to 16%).

And while adults 18-29 approved of Obama’s performance on race relations in August by nearly two-to-one (59% to 32%), today they are roughly evenly divided (44% approve vs. 45% disapprove).

Views of Obama on race relations continue to correlate with education level. College graduates are more likely to approve of Obama on this issue (50%) than those with only some college (34%) or no college experience (37%).

More Blacks Have Heard ‘A Lot’ About Garner Case

Majorities of Americans say they have heard “a lot” about the grand jury decisions not to charge Officer Darren Wilson in the shooting death of Ferguson, Missouri teen Michael Brown (75%) and a New York City police officer in the choking death of Eric Garner (52%).

When it comes to the case in New York City, blacks and Democrats are much more likely to say they have heard a lot about it, compared with whites and Republicans. About six-in-ten (63%) blacks say they have heard a lot about the decision not to charge a police officer in the choking death of Garner, while about half (49%) of whites say the same. More whites than blacks have heard “a little” about the case (36% vs. 26%, respectively), and about equal percentages have heard “nothing at all” (14% of whites and 11% of blacks).

Sharp Racial Divisions in Reactions to Brown, Garner Decisions
Survey ReportAssessments of Grand Jury DecisionsRace as a Factor in the CasesBlacks Skeptical that Police-Minority Relations Will ImproveObama Approval on Race Relations Drops since AugustMore Blacks Have Heard ‘A Lot’ About Garner Case
About the Surveys