The public is divided over last week’s Supreme Court rulings on same-sex marriage: 45% approve of the court’s decisions, while 40% disapprove. 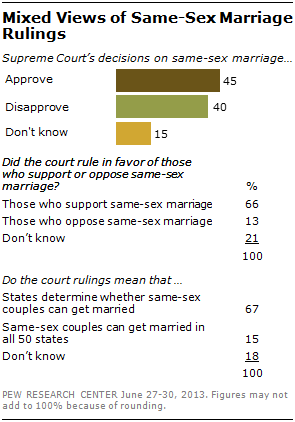 The latest national survey by the Pew Research Center conducted June 27-30 among 1,003 adults, finds that most Americans are aware of the ruling and its implications. Two-thirds (66%) know that the court ruled in favor of same-sex marriage supporters, while about the same share (67%) knows that it is up to individual states to determine whether gay couples can get married.

By contrast, there is far less awareness of another major Supreme Court decision last week. Just 34% know that the court overturned parts of the Voting Rights Act; 23% say incorrectly it kept the law intact and 43% have no opinion. Opinions about the court’s decision in the case also reflect some confusion: A plurality (43%) has no opinion on the ruling, while 33% approve and 25% disapprove. 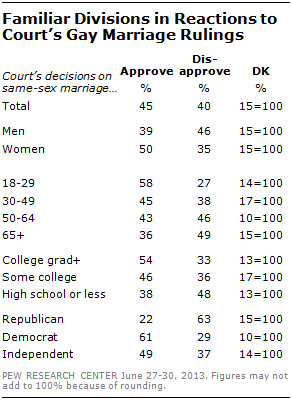 Reactions to the court’s rulings on same-sex marriage are divided along age, gender and partisan lines. By about two-to-one (58% to 27%), those younger than 30 approve of the court’s decisions. People 65 and older disapprove of the rulings by 49% to 36%.

Overall, 61% of Democrats approve of the Supreme Court rulings on gay marriage, while 63% of Republicans disapprove of them. And women (50% approve) are more supportive of the court’s actions than are men (39%).

These gaps generally mirror differences in opinions about whether gays and lesbians should be allowed to marry legally. In May, 51% favored same-sex marriage while 42% were opposed. (For more, see “In Gay Marriage Debate, Both Supporters and Opponents See Recognition as ‘Inevitable’,” June 6, 2013.)

The survey finds that the court’s rulings on same-sex marriage were the public’s top news story last week: 30% followed this story very closely; by comparison, no more than about one-in-five tracked any other story very closely, including the George Zimmerman trial (22%), Senate passage of an immigration bill (21%) or the court’s ruling on the Voting Rights Act (19%).

A year ago, there was far more interest in the Supreme Court’s decision upholding most provisions of the 2010 health care law: Fully 45% followed news about that ruling very closely. 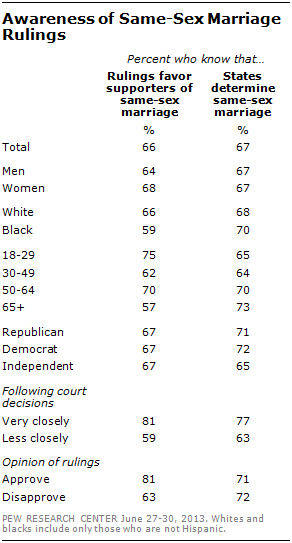 About as many (66%) know that the rulings favored those who support same-sex marriage, while 13% say they favor opponents of gay marriage and 21% don’t know.

But only about half of Americans (49%) are able to answer both questions correctly, while 51% either answer at least one wrong or do not know the answer to one or both questions.

Young people (18-29) are more likely than those 65 and older to know that the decisions favored same-sex marriage proponents (75% vs. 57%). But there are more modest age differences in the shares that know the rulings leave it individual states to determine whether gay couples can marry.

Identical majorities of Republicans, Democrats and independents (67% each) know that the court’s rulings favored gay marriage proponents. And there are only small partisan differences in the percentages saying the court’s rulings allow individual states to determine whether same-sex couples can marry.

Many Unaware of Voting Rights Decision

Overall, two-thirds of Americans either do not know how the Supreme Court ruled on the Voting Rights Act (43%) or say incorrectly that it kept the law in effect (23%). Only about a third (34%) know that the court overturned parts of the law. 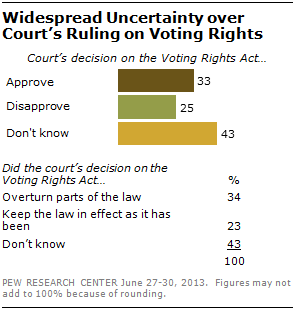 Overall, slightly more approve (33%) than disapprove (25%) of the court’s ruling in the voting rights case, but 43% could not answer. Among those who correctly assess the impact of the court’s decision, 45% approve, while 40% disapprove and just 15% offer no opinion.

Top News Stories of the Week

The Supreme Court’s pair of decisions 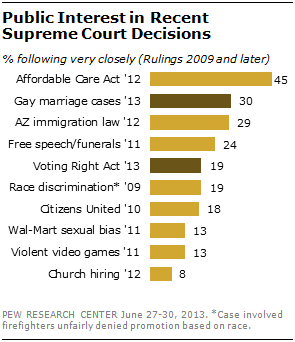 on same-sex marriage was the public’s top news story of the week. Three-in-ten (30%) very closely followed the coverage of these rulings. Fewer (19%) followed the court’s decision on the 1965 Voting Rights Act.

Relative to other major Supreme Court decisions of the last four years, news about the rulings on same-sex marriage attracted about as much interest as the 2012 decision on Arizona’s immigration law (29% very closely), but attracted far less attention than the court’s judgment to uphold most provisions of the Affordable Care Act. In June 2012, 45% of the public followed this story very closely. Public interest in the court’s decision to overturn parts of the Voting Rights Act ranks in the middle of the pack among major court decisions since 2009.

Similar percentage of Republicans and Democrats say they followed news about the same-sex marriage rulings very closely (29% and 35%, respectively). On the Voting Rights Act decision, more 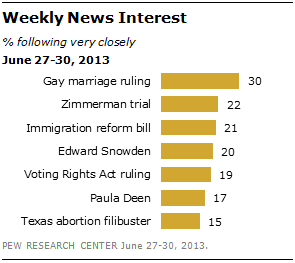 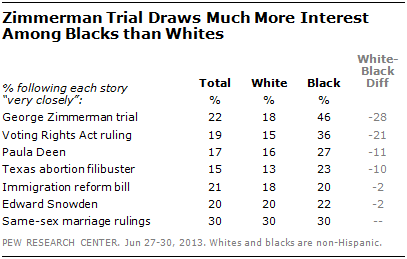 More blacks than whites also paid very close attention to news about the Supreme Court’s decision on the Voting Rights Act (36% of blacks, 15% of whites) and reports about TV food personality Paula Deen admitting that she used racially insensitive language (27% of blacks, 16% of whites).